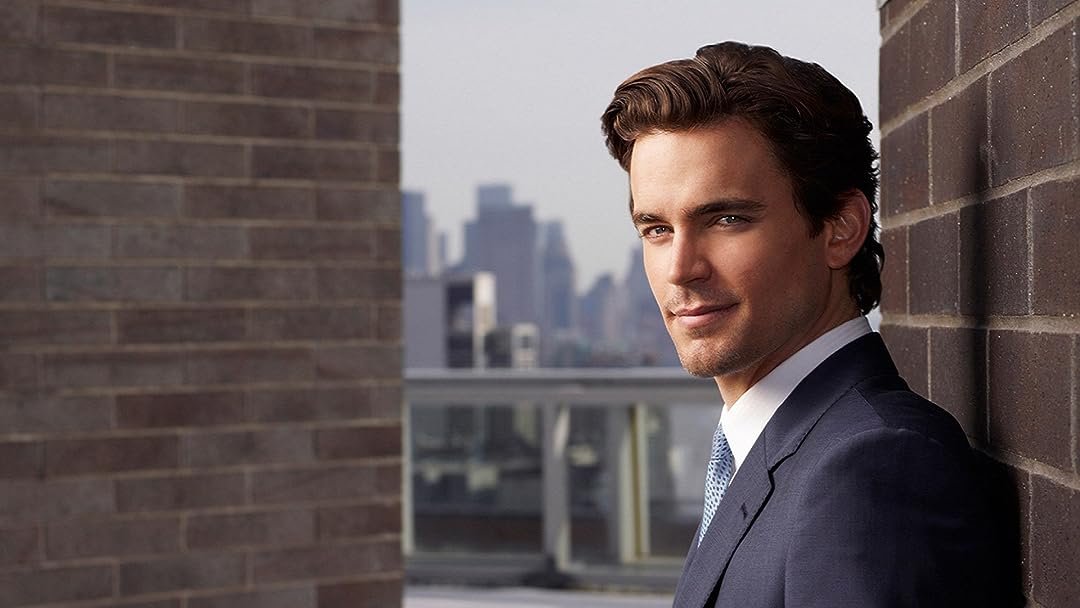 Mark Baker - Carstairs ConsidersReviewed in the United States on April 16, 2015
4.0 out of 5 stars
"Did You Set Off an Alarm?" "Peter, That's Hurtful."
Verified purchase
I hate to say it, but I’m actually kind of glad that the next season of White Collar will be the show’s final season. Don’t get me wrong, I’m still enjoying the show. But the writers have to work so hard to keep the cast of characters together at this point, it’s time to set them free and bring an end to the saga. Having said that, there is still plenty of fun to be had in season five, which is actually what I’m reviewing today.

If you have missed the show in the past, it focuses on Neal Caffrey (Matt Bomer), a con man who has been caught by FBI agent Peter Burke (Tim DeKay). Instead of serving out his sentence in prison, he’s become an asset to the FBI and helps them bring down other white collar criminals. Reluctantly helping is Neal’s con man friend Mozzie (Willie Garson). On the FBI side of things, we’ve gotten to know agents Clinton Jones (Sharif Atkins) and Diana Barrigan (Marsha Thomason). Rounding out the cast is Peter’s long suffering wife Elizabeth (Tiffany Thiessen) who occasionally gets involved in cases, too.

This season opens with Peter in prison after he got falsely accused of murder in the fourth season finale. (But that’s a long story.) Neal is willing to do anything to get him out of prison, especially when the person who really committed the murder goes underground. In his efforts to do that, Neal winds up indebted to Curtis Hagen (Mark Sheppard), a dangerous man from his past, and once again finds himself trying to evade the FBI while working with them on cases while keeping his latest crimes secret to keep Hagen’s blackmail at bay.

Of course, there is always the case of the week that Neal, Peter, and the gang at the FBI need to solve. This season we get such cases as a black market ring that leads straight to Mozzie, Neal becomes a butler to prove an imposter is in their midst, Peter must work with his ex-girlfriend on a case, and Diana must go undercover to stop a rogue stock trader. Neal even gets a new love interest in Rebecca (Bridget Rega), a woman he meets at a museum early in the season.

Unfortuantely, Diana is absent for much of the season since Marsha Thomason gave birth in real life as well as on the show. The rest of the cast is here full time however, and they are wonderful at bring their characters to life each week. The guest stars jump right in and match this fine level of acting.

The overall story arc this season is very interesting and kept me off kilter with a couple of nice twists along the way. This isn’t the show’s best story arc, but it was certainly entertaining. Likewise, the cases of the week are wonderful as always, and I loved watching them work on solving these cases together.

So what is my problem this season? We’ve gotten to the point where the characters have outgrown the premise of the show. I’m not saying I think Neal has reformed, but he certainly has earned being off the anklet the FBI has used since season 1 to track him. Yet we still have that plot devise. Peter has been up for and turn down promotions several times to stay close to Neal. In fact, they play with him moving to DC for much of this season. And there is no reason in the real world he wouldn’t do that. I’ve always loved how real and fully developed the characters on the show are, but unfortunately this is the result – too much realistic character growth hampered by the constraints of the show.

Having said all this, I’m thrilled the show is coming back for a final six episodes. The cliffhanger at the end of this season cries out to be resolved. And it will give us a chance to say goodbye to these characters properly and see where the next chapter for all of them begins. (I just hope I like how they choose to end it.)

As always, the heart of the show is the relationship between Neal and Peter. They do a better job of creating tension between them than in seasons past, but at times even that felt artificial. And, as much as I love their relationship, it is the only reason Peter hasn’t taken a promotion, which doesn’t feel right to me.

This season consisted of 13 episodes, and all of them are present in this four disc set. Not surprisingly, they are in their native wide screen and full surround as well. Extras include a gag reel and deleted scenes as well as an audio commentary on the season finale and a featurette about star Willie Garson taking on directing duties for an episode this season.

So while I’m still enjoying the show overall, I’m glad everyone has agreed it is time to end the story. Knowing that allows me to enjoy the fun of season five of White Collar more.

Jane LeslieReviewed in the United States on December 20, 2013
5.0 out of 5 stars
One of the best, surprise it wasn't snatched up by the major networks.
Verified purchase
I love this show. The struggle that Neal goes through between his criminal tendencies and his desire to play it straight for Peter are difficult. Also difficult is Peter' genuine affectionate for Neal warring with his need not to cross a line of trusting a criminal informant. Having worked with criminals in the past, I recognize Peter's dilemma. It is deadly to cross that boundary. Peter is often hurtful to Neal, thereby reinforcing Neal's sociapathy and his relationship with Mozzie. Mozzie is a wonderful character, probably with an autistic spectrum disorder, but only too willing to pull Neal over to the dark side. Mozzie is a sympathetic character and also highlights the boundary issues. Add to that all the tech and you've got a winner. It also doesn't hurt that Neal is astounding eye candy and one roots for him in his every endeavor, straight or criminal. Obviously a reprise of "To Catch Thief, first with Cary Grant in a major motion picture and then with Robert Wagner on TV in the 70's.The tech updates are fascinating (if a little scary). This show is special on many levels. I hop to watch it for many more years.
2 people found this helpful

Peter FadenReviewed in the United States on January 7, 2014
5.0 out of 5 stars
So far, another fine season of an excellently written show.
Verified purchase
I think at this point if you are watching White Collar, you probably have followed the saga of Neil Caffery and Agent Burke for a few years now. If not, I dont want to ruin things for ya'....I'll just say that the timeline and pacing between episodes and between seasons is stellar, the writing is witty and intelligent, but also completely accessible. The casting really couldnt be better I think as well. This season (so far) seems to be focused more on Neil's uncertainty regarding who he is and the direction his life should be going.
Anyway, this season is simply an extension of the previous ones, and should be viewed as a long term project still. I'd be shocked if this show didnt go at least two more seasons after this one (although this is just my opinion, unconfirmed otherwise by me).
I see no reason why somebody wouldnt enjoy this show or this season.
One person found this helpful

DRGATBReviewed in the United States on May 19, 2014
5.0 out of 5 stars
For TV show it's great
Verified purchase
White Collar has a strong ensemble case and clever plot and dialogue. The story line particular to Season 5 is getting into "jump the shark" territory, but it's still satisfying fun. I think the producers have made a good decision to end the story line after season 6 - there are only so many cons, and threats of return to prison, and the inevitable involvement of family and friends into criminal plots that one can watch. The bottom line is that I looked forward to each episode, enjoyed the unexpected ( but expected) twists, and never felt that my time was wasted in watching.

One other thing the writers have done was to create thoroughly likable characters. Unlike Psych or Scrubs, I never felt the need to push a pie into any of the White Collar characters faces!

Lost PathfinderReviewed in the United States on June 25, 2019
3.0 out of 5 stars
I LOVE this series
Verified purchase
So I really do love WC. However season 5 is my least favorite. They pull some really, well, hard to believe cons. YES it is a TV show and made for entertainment. But season 5 is my least favorite. I LOVE the ending to the series. AWESOME!!. Anyway you need season 5 to understand season 6.
2 people found this helpful

JerbearReviewed in the United States on November 18, 2014
5.0 out of 5 stars
The best season yet, this show just keeps getting better.
Verified purchase
Being a fan of this show I couldn't wait for this season to come out. This is the best season yet the plot line goes throughout this season. It is a great one, I don't want to give out too much in case you have not seen it. Shows that go on for a number of seasons you wonder if they can keep up with people's interest in the show, these guys come up with great stuff and as I said this season is the best yet looking forward to seeing the new season. Now that I have cable I'll be able to stay up on this show in it's last season. If you have never seen this show you may want to start with the first season and go on from there since this does build from season to season. All of the seasons can be found right here on Amazon.

Grey Area 51Reviewed in the United States on July 6, 2015
2.0 out of 5 stars
This season was heartbreaking, and not in a good way
Verified purchase
Kinda heartbreaking season for certain White Collar fans. First of all, I need to say: If you are reading reviews wondering if you should watch the series, you should! It's one of my all-time favorites. The relationship between the FBI agent (Peter Burke) and his CI/prisoner/best friend (Neal Caffrey) is one of the funniest, most endearing, conflict-ridden, caring partnerships ever. But please start with season one.

Now - this was my least favorite season, bar none. It took four seasons of careful character development and ripped it up and threw it away in so many ways. If you just watch this for the caper storylines and the conflict between Peter and Neal, fine. But if you've followed a slick, remorseless criminal and a harsh FBI agent as they come to care deeply for one another and make each other better men, this season is unforgivable

Peter goes from being Neal's guiding light, family, and protector to making Neal cry in his office, giving him away to another handler, and treating him with deep verbal cruelty. Neal of course responds by sliding deeper and deeper back into the criminal rabbit hole. Near the end of the season, they sort of start being partners again with no explanation or reason they can still view each other with trust or friendship - it's like the show runners just waved a magic wand and expected everything to fall into place.

It's bad storytelling at best and heartbreaking at worst.
10 people found this helpful