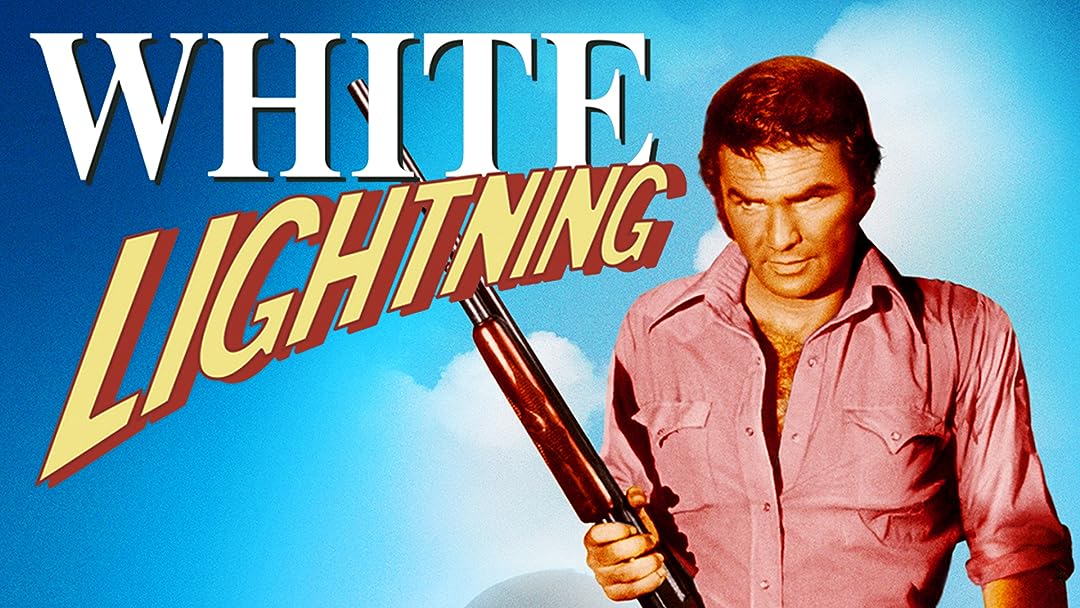 Eclectic GalaxieReviewed in the United States on August 30, 2017
5.0 out of 5 stars
Burt's Best, Ned Beatty Evil, Bo Hopkins Stupid, Matt Clark Stupider, Jennifer Billingsly Smart and Sexy
Verified purchase
There was a style of movie making in the 70s where heroes were villains and villains were heroes, and violence ruled without apology. White Lightning is Burt Reynold's best work. It's a hillbilly car chase black comedy but not really. It's dark and nasty, and has its humor but the drama is pretty real as is the violence. It's filmed in rural Arkansas I believe, and the location shooting doesn't hide the sweat and humidity and the general conditions of life there. My favorite scene in the movie is when Burt and Roy Boone (Bo Hopkins) are delivering moonshine to a bar, and you hear the beginnings of a boogie riff as they are loading up outside, and when they swing the doors open, the volume of the music jumps up about 10 fold. In the theater this was about knock your socks off volume. A single girl is dancing to the music while the customers are fanning themselves to keep cool. As the moonshiners make their delivery the bartender (uncredited) reveals he knows Gator (Burt's) dad all of this dialog shouted over the music, which never reduces in volume. After this incident, Gator decides to burn his little black book where he's been keeping notes for his fed assignment - he decides the whiskey people are good folks and he only wants revenge on the sherrif, not everybody in the business. When he throws his black book in a burning trash barrel, Roy accuses him of sleeping with his girl friend (he is) and Gator deliberately picks a fight with him just to give the book time to burn. 70s movies like this sometimes require multiple viewings to catch details like this, the what and the why. Ned Beatty shaves his head and plays a much older man who "run Bogan County for 20 years" and sets the tone for the evil sherriff stories to follow. But Beatty's J.C. Connors is no buffoon - he's nasty, sadistic, and thinks nothing of killing anyone making trouble for him. Jackie Gleason he's not. One of Beatty's few early serious roles (Nashville and Deliverance come to mind). White Lightning is the godfather of the hillbilly / moonshine / car chaser of the 70s, but it's darker, more real than most of the slapstick that followed. Dukes of Hazzard, Smokey and the Bandit and half a dozen other owe their genre to White Lightning. Oh and Jennifer Billingsley, a very sexy actress who fits the part perfectly, and sadly didn't have a long career in films, is Burt's girl and she's more than just a pretty thing - she comes in downright handy when the going gets tough, When you see Gator and Roy unloading and the opening lucks of a 12-bar boogie in a back alley, crank up your volume and experience what it's like to walk into a rural bar - the place was probably real. Location shooting, the sweat is real. A tremendously good film often forgotten.
34 people found this helpful

Buck HanksReviewed in the United States on April 17, 2020
5.0 out of 5 stars
High Action First Time in High Definition
Verified purchase
Review of:

First of all, let's clear up the editing issue that everyone has been complaining about for years. White Lightning would have been an R rated feature. However, the director and film company preferred to promote it to a younger audience, so the decision was made to cut it and go for the PG rating. White Lightning was never shown theatrically in its uncut version. So technically, this version is not edited since no one outside of the filmakers have ever seen the other version.

Kino Lorber did an excellent job on the remaster. The violent scenes are shown much better lit, so the new 1080 detail almost makes this appear as an uncut edition. The audio is Master Audio; so the playback has full theatrical power. Unfotunately, the F Bombs and G-D's were all re-dubbed for the PG version.

Overall this is the best available version of (what I consider to be) Bury Reynold's finest hour.

joel wingReviewed in the United States on July 8, 2021
3.0 out of 5 stars
Burt Reynolds seeks revenge mixed in with anti-establishment messages
Verified purchase
White Lightning was another bad boy role for Burt Reynolds. Ned Beatty a crooked sheriff killed Reynolds’ brother and he wants revenge. The story involves the cops, moonshining, women, cars and lots of chases. Many of these would become mainstays of Reynolds’ films throughout the 1970s. The different with this one is that if you pay close enough attention there are anti-establishment messages contained within it. Beatty for instance, complains about the integration of schools, blacks voting and people protesting against the Vietnam War. He’s also thoroughly corrupt. It’s a well done movie. If you’re a film nerd you’ll also notice that part of the soundtrack was used by Quentin Tarantino in his Kill Bill movies.
2 people found this helpful

rangerfieldReviewed in the United States on November 16, 2020
1.0 out of 5 stars
Inverted agon
Verified purchase
The hero is a snitch crook. The villain is a genteel lawman. Sure he's corrupt but Uncle Sam wants to toss you in the slammer for 10 years for minor tax violations. Movie is a New York "ethnic" version of the Deep South (their small town hick corruption is different from our dystopian big city corruption!). Some good car chase scenes with gigantic American cars of the early 70s but here's a protip: tires don't squeal on dirt roads. Forgot about all the stupid culture distortion when RG Armstrong and his beautiful voice showed up.
3 people found this helpful

Will JamesReviewed in the United States on April 28, 2018
5.0 out of 5 stars
Grew Up on this one
Verified purchase
It's Burt Reynolds as Gator McCluskey...need I say more?! Classic 70's tale of moonshine, crooked cops, fast cars and faster women (sticky pudding anyone)? Made when Burt still had acting chops, this film is a classic 70's southern tale that straddles a fine line between camp and brilliance... this was one of my favorite films as a senior in HS in 1974, so maybe I'm a little biased...but again folks, it's BURT REYNOLDS as Gator McCluskey...that should be more than enough...trust me...
8 people found this helpful

Dave D.Reviewed in the United States on April 19, 2020
4.0 out of 5 stars
Good classic Burt Reynolds stuff
Verified purchase
The one thing that really stands out about this movie is the inconsistency with the car. Strange I didn't see anyone else mention this but the car Gator is driving is a 4 speed in some scenes and an automatic in other scenes.
5 people found this helpful

StryderReviewed in the United States on February 23, 2015
5.0 out of 5 stars
Shaky Puddin'!
Verified purchase
I read some negative reviews regarding censorship and one or two that mentioned this disc having the wrong region coding, but I found no such problems. The case and disc were in fantastic shape. It was the first time I had seen this movie and it was stellar! Funny, packed with fun and action.

I love how this movie captures a time that seems to me to be long forgotten. The pool hall in one scene and the awesome cars and trucks in the others. Ned Beatty plays a good jerk. Pay special attention to Bo Hopkins and Matt Clark. I've seen Matt Clark in other movies, but none where he was this young.

Get this movie. You won't be disappointed.
20 people found this helpful

StratovariousReviewed in the United States on May 15, 2020
5.0 out of 5 stars
Beginning is a bit disturbing, the rest is pretty 'light' , Burt is great.
Verified purchase
Really enjoyed the film , note though if you're picky about detail, there are like 5 or 10 scenes
where Burt's back window is smashed out , gone, then same number of times it gets
replaced, lol , editing nightmares I guess, but also notice later on that the
Sheriff's is also gone and replaced,,,,,lol. There are so many other things/oddities, but I'll spare you ,
I think you will like this film, worth watching .
One person found this helpful
See all reviews
Back to top
Get to Know Us
Make Money with Us
Amazon Payment Products
Let Us Help You
EnglishChoose a language for shopping. United StatesChoose a country/region for shopping.
© 1996-2022, Amazon.com, Inc. or its affiliates