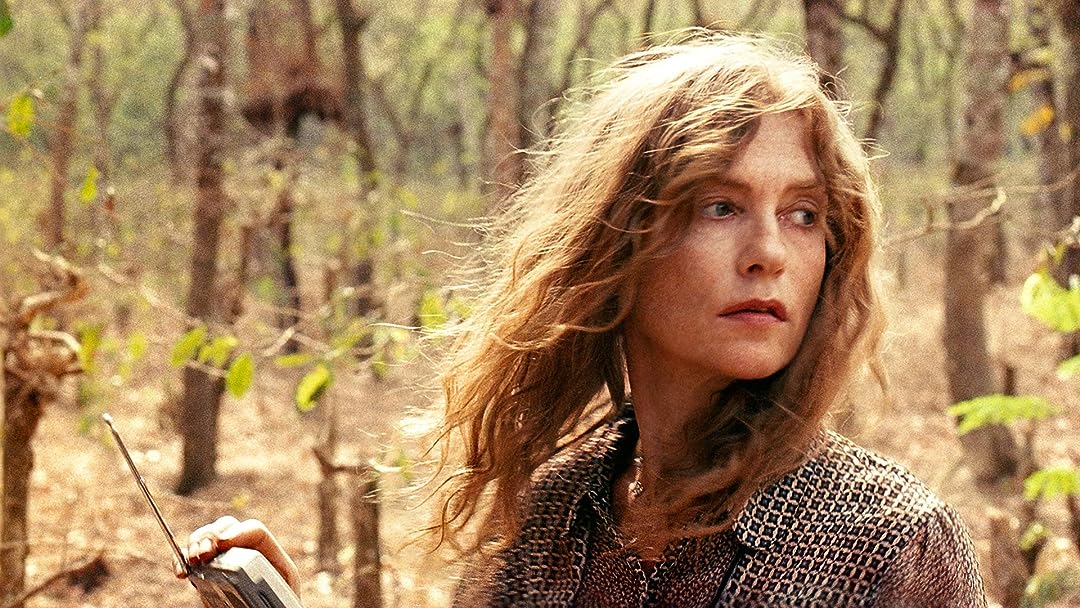 (86)
6.91 h 45 min200918+
From Claire Denis, the incomparable director of BEAU TRAVAIL, L'INTRUS and 35 SHOTS OF RHUM, comes WHITE MATERIAL: a rich and thrilling account of a woman driven to the edge. An official selection of the Venice, Toronto and New York Film Festivals, the film is a riveting exploration of the complexities of racial conflict and the limits of human will.

IntoMoYouKnowReviewed in the United States on January 13, 2021
5.0 out of 5 stars
One of my favorite French films of the 2000s
Verified purchase
I hadn't realized this was made by the same director of "Beau Travail," but now that I know, I totally see it. I've also seen her English film "High Life" with RPatts and Juliette Binoche. Watch her French films, they're much better.

Claire Denis sets this one on an African plantation in the midst of revolution. A white-owned coffee plantation comes under fire by warring militias taking over the country, as the owners bicker over whether to flee for their lives, or stay and fight for their way of life, as native strangers, if that makes sense. Determined to stay is, of course, Isabelle Hubert, just as icy as ever but with a wild tangle of brassy curls on her head. Far from the women she plays in Paris or even in English, in this film, she still very intimidating and stoic, but she also realizes that the fight she wants to fight won't end well, and like any captain, she chooses to go down with her ship.

The performances in this are stupendous. Every actor, whether child or adult, does an incredible job of conveying the spectrum of emotions and feelings they have. There may be "villains" in this movie, but they are motivated by the pride they have in taking back what should be theirs. I really loved this movie, but it's not for everyone, and I'm sure it will freak a lot of white people out. With colonialism all but dead, the chickens coming home to roost is inevitable, even if the picture of it makes colonialists uncomfortable.

C. S.Reviewed in the United States on July 6, 2020
3.0 out of 5 stars
powerful entry into the Criterion Collection - if you can follow the plot
Verified purchase
Being an American, I know tragically little about other countries/cultures (thanks, questionable public education history classes for focusing on rich power-hungry white dudes). This was an eye-opening and engaging foray into African culture, and how Whites with money seem to get a free pass until the sh*t hits the fan. The acting is solid and Isabella Huppert is always outstanding. My main quibble with the film is that it's told in a non-linear fashion; this is not evident until partway through the film and requires some mental reshuffling. This will require additional viewings, but overall engaging enough to be a worthwhile contender for someone who collects foreign films.
2 people found this helpful

Todd M.Reviewed in the United States on May 9, 2020
4.0 out of 5 stars
It’s over, Johnny.
Verified purchase
When your life starts to come apart and how you deal with it is pretty much this movie in a nutshell. Its light on the action, adventure and complexities of racial conflict mentioned in the synopsis and there is no setup for it… it just drops you right into the final days as the French military departs and some chose not to leave. The story of what happens when the occupiers pull out isn’t now and it most often is replaced by chaos… in this case it’s orphaned children with guns and you know that isn’t going to go over well with white plantation owners. It’s interesting and begs the question of what would you do if all you have ever done is disappearing in front of you.
One person found this helpful

Stephen C. BirdReviewed in the United States on July 24, 2011
4.0 out of 5 stars
Dénouement of French Colonialism à la "Apocalypse Now"
Verified purchase
I saw this film when it first came out, and have now viewed it for a second time. There is an atmosphere of menace in this picture that is immediately recognizable, that becomes increasingly palpable as the film progresses. As the picture gains momentum, the characters surrounding the defiantly determined Maria Vial (Isabelle Huppert), begin to play out their personal vendettas and the dominoes start to fall. There are creepy scenes with child soldiers stealthily entering the dwellings of the plantation compound, taking jewelry, clothes and whatever else they find to be of value. Everyone is under surveillance, hiding in plain sight, fearing for their lives; the African soldiers are killing not just the whites, but also their own people as anarchy descends.

Isabelle Huppert, as Maria, gives an understated performance; in an interview featured on the supplemental material of this DVD, she explains that Maria does not show any emotion. Maria is described, on the back cover of the DVD, as being "ferocious" and a "crazed character". But after watching Huppert's performance, neither of those descriptions seem appropriate. Maria is tenacious yet impassive; it's as if the high stakes of Maria's situation demand stoicism. It is not until near the end of the film, when her world has collapsed, that we see any evidence of her being crazed or ferocious. Huppert's performance is one of quiet desperation, of internal crumbling, of someone refusing to recognize the harsh reality confronting her. Huppert is a chameleon who blends into the ambiance of any picture she appears in; she achieves this in "White Material" as well.

Christophe Lambert also gives a strong and understated performance as André, Maria's husband, who is afraid and urgently suggests to Maria that they escape the plantation; and yet he is also trapped. The frightening breakdown of Manuel, Maria's spoiled brat son (portrayed by Nicolas Duvauchelle) is another crucial aspect of the film; hs is the primary underminer, who through his destructive actions, initiates and increases the momentum of the downward spiral of the plantation. In the final twenty minutes of the film, Maria puts on a pink dress, which functions as a metaphor for her fragility. The score by Tindersticks, composed specifically for this picture, provides a moody, alternative counterpoint that underlines the atmosphere of desolation. Highlights of the supplemental material of this DVD include interviews with Claire Denis, who I found to be compelling in person; and with Isabelle Huppert (that I already mentioned), in which she discusses her character Maria.

I have not seen any other pictures by Claire Denis, and so I cannot compare this film to her other work. After seeing "White Material", I would classify her as a documentarian of a brutal hyperreality, which manifests in "White Material" as the death and destruction that moves like a wildfire across the countryside to devour the Vial coffee plantation and the world of Maria Vial and her family. Based on the strength of "White Material", I am interested in seeing Claire Denis' other films.

Stephen C. Bird
Author, "To Be to Is to Was"

james brownReviewed in the United States on February 10, 2021
5.0 out of 5 stars
White material
Verified purchase
I,liked this item.
One person found this helpful

KHENSEReviewed in the United States on April 25, 2011
5.0 out of 5 stars
A Harsh Destiny
Verified purchase
Set in modern Africa - A local people who have had little control over their lives are tossed around from one hopeless existence to another. A band of young men organize for power - but they have no vision - they can only hope to eventually serve a new dictator. The White Settlers cling to an old vision - their time has come to an end. Isabelle Huppert - a member of a White Settler family - is amazing in this role - a butterfly with an iron will. At times she gets respect, when it would appear there was none to be had. A mesmerizing film and soundtrack - I would compare it to Werner Herzog's "Aguirre Wrath of God."
5 people found this helpful

M. McHughReviewed in the United States on December 13, 2020
1.0 out of 5 stars
Was not able to watch the movie
Verified purchase
I could only play on my ipad that was not where I can watch movies. When I tried to use my apple TV I kept getting messages that my system was not acceptable. So I never saw the movie but paid for it! Not acceptable.
See all reviews
Back to top
Get to Know Us
Make Money with Us
Amazon Payment Products
Let Us Help You
EnglishChoose a language for shopping. United StatesChoose a country/region for shopping.
© 1996-2022, Amazon.com, Inc. or its affiliates