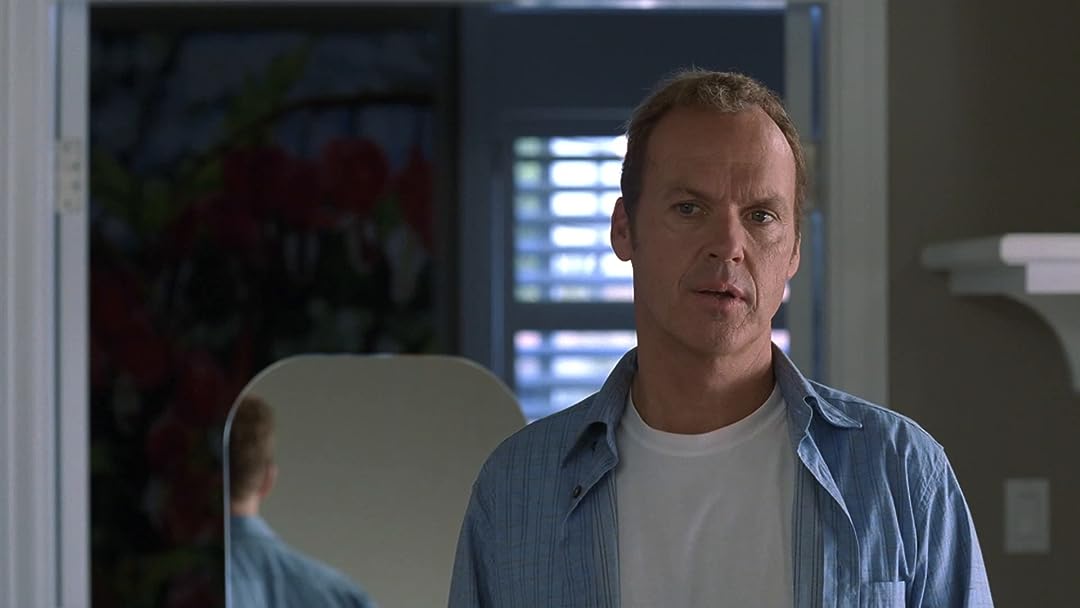 Ravenhair312Reviewed in the United States on February 15, 2022
1.0 out of 5 stars
DISSAPPOINTING
Verified purchase
I wanted to love this movie because I love Michael Keaton, but after a beautiful beginning, the movie kind of losses it's footing and ends up not telling anything! The story is barely hanging for dear life! I watched it until the surprising and unsatisfying end hoping that it would get better. It never did :((
2 people found this helpful

J. WestReviewed in the United States on August 7, 2021
5.0 out of 5 stars
"Hearing Voices From The Grave!"
Verified purchase
I'm a big fan of the paranormal so I thought this movie was sad but very good. The storyline was absolutely brilliant about Jonathan Rivers (Michael Keaton) who lose the love of his life Anna (Chandra West) as Raymond Price is telling Rivers that he is getting E.V.P. voices from the grave as Rivers helps her rescuing people. As Srarh (Deborah Kara Unger) helping River along the way but the end was very shocking. If you'll love these kind of movies you'll love this. Highly recommend.

Mary OzReviewed in the United States on July 27, 2020
5.0 out of 5 stars
Great Movie-Great Suspense and Scares! Really Enjoyed this Movie!
Verified purchase
This is an Amazing movie and I was excited when I heard there was a sequel. SPOILER: I love how the husband is receiving messages from his wife throughout the movie. This movie had the perfect amount of suspense and scary at the same time. I don't think the sequel makes as much sense but I still love this idea!
One person found this helpful

Lost Soul CriticReviewed in the United States on June 23, 2009
5.0 out of 5 stars
Eeeerie, Spoookyy Fun!
Verified purchase
'White Noise' is one of the more enjoyable movies about the preposterous notion of communicating with the dead that I've ever seen. I'm not a Michael Keaton fan (I don't dislike him either), so I almost passed this movie over. Wow! Am I glad I didn't. This film is gripping from the start. Keaton's performance is beyond what I knew he was capable of. Setting aside the eeriness of the movie, one is intrigued by the interaction of the characters. There's a lesson to be learned here too. Don't let the life you have pass you by while trying to hold on to what is no longer there. Keaton's character becomes so engrossed with attempting to communicate with a dead loved one, that he neglects the living people that are still there in his life. And who still need him to be there for them. As for the HD version of this film, it's stunning. The standard was very well done and I didn't expect to see much difference in picture quality. Although some people smirk at the demise of HD DVD, they need to understand something important. If it weren't for HD DVD, Blue-Ray would have not been invented. Don't believe me? Read the history of the formats. But it's all good I have a Blue-Ray player too. For instance HD DVD has always used VC-1 as it's encoding. Blue-Ray started out still using versions of MPEG. Most Blue-Ray movies now use VC-1 or equivalent, but; would they have had it not been the standard set first by their competitor? I feel that any movie which uses special effects benefits greatly from any type of Higher Definition discs. And 'White Noise' definitely does. If it is a movie you'll be watching repeatedly, and showing to others. Then, it's worth buying in either one of the Hi-Def formats.
5 people found this helpful

Jay_N81Reviewed in the United States on March 6, 2020
1.0 out of 5 stars
Getting only half the advertised product...
Verified purchase
Buyer beware: Entire reason I bought this movie was for the digital copy, and after receiving it the code is so far passed it's expiration date that it won't work, despite pleading directly with Universal about it. Now I have to buy it again on VUDU for $15 just to have the digital copy this was supposed to provide. Recommend using NBCUcodes.com to check for this (didn't know about this site until now), though it only works for Universal titles.

Adam RichterReviewed in the United States on December 1, 2010
3.0 out of 5 stars
When Films Collide...
Verified purchase
Imagine, if you will, that you are the head honcho at a major Hollywood movie studio and you're presented with two pitches for potential films. Pitch #1: "Michael Keaton plays a guy whose wife dies unexpectedly, and he realizes that he can receive messages from her from the 'Other Side' via EVP (Electronic Voice Phenomena... specifically, voices and images of the dead recorded from static, AKA white noise). However, this attracts other, dangerous spirits who'd like to cross over into our world."

Sounds kind of cool and scary, right? Then you hear Pitch #2: "Michael Keaton plays a guy who realizes that he's receiving messages in white noise from people who live in his area who are about to die in some awful way. However, these messages are somehow coming to him from the near future, and he has the power to rush out and try to prevent tragedies... if he can decipher the clues in time." Wow, that sounds exciting too!

Yup, both of these concepts could have potentially become awesome thrillers. The problem is, the actual Michael Keaton movie "White Noise" is an ill-advised mashup of these two different plots, and the result, as you might expect, is mostly confusion.

This is a shame, because much of "White Noise" is suspenseful and rather creepy. Although things get off to a slow start, Keaton does a nice job playing a sympathetic character, and the film manages to draw the viewer's interest, up to a point. However, once the two concepts collide, bewilderment reigns supreme. The movie's internal logic starts changing often and unexpectedly, and the (SPOILER ALERT!) late introduction of a character who seemingly wandered into the movie off the set of a "Hostel" or "Saw" flick filming on a nearby soundstage only makes things worse. Keaton gamely tries to act like he's taking things seriously, but the movie increasingly goes off in so many different directions at once, it just becomes absurd.

As it stands, however, "White Noise" is still watchable for Keaton's performance, for the creepy stretches and scary moments, and for the intriguing possibilities of EVP in general. And the disc's extras are worth watching too... you get deleted scenes (including alternate versions with more graphic images), commentary, and some short documentaries featuring real-life EVP experts (they play several of the ghostly voices that they've allegedly recorded and demonstrate the basics of recording them). It's just too bad that the movie, ultimately, didn't realize that sometimes "less is more." If "White Noise" had narrowed its focus, it probably would have been a far more satisfying film.

Pål AmundsenReviewed in the United States on June 20, 2005
4.0 out of 5 stars
Another highly entertaining supernatural thriller...
Verified purchase
...made "in the spirit" of similar movies such as "The Sixth Sence" and "The Others" (my personal favorites among the many movies of this genre) with an undeserved mixed reputation (this movie has I mean). "White Noise" is not revolutionary, but if you've enjoyed the previous two mentioned above, and also "Gothika" and "Signs" -well, here's you cup of tea. A friend of mine said that the movie wasn't boring, but that it wasn't scary. My response now is; Not scary? Were you asleep or what? Though not the scariest movie I've ever seen, I sat tightened to my seat.

Not much more to say than; Enjoy "White Noise"!
2 people found this helpful

Deanna NaceReviewed in the United States on September 5, 2019
4.0 out of 5 stars
Different concept of how good & evil spirits could get through & make contact
Verified purchase
Different kind of horror movie that makes you believe the dead could make contact through radio stations that aren't tuned in. Interesting concept. Mixes in some evil spirits that don't like the good spirits trying to help.
One person found this helpful
See all reviews
Back to top
Get to Know Us
Make Money with Us
Amazon Payment Products
Let Us Help You
EnglishChoose a language for shopping. United StatesChoose a country/region for shopping.
© 1996-2022, Amazon.com, Inc. or its affiliates