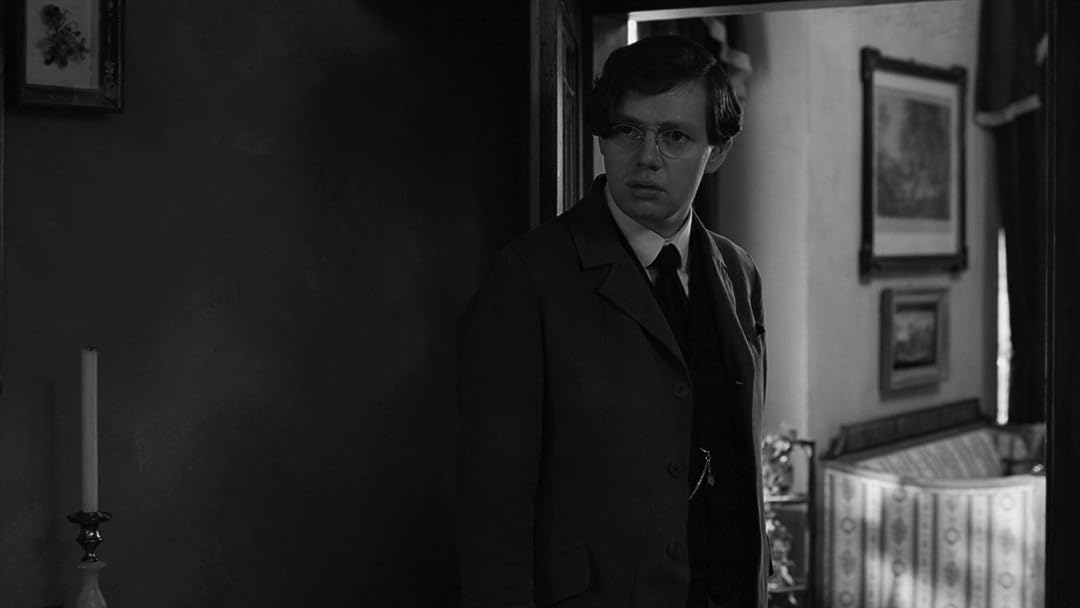 (656)
7.82 h 23 min2009R
When strange accidents occur in a German village, they gradually take on the character of a punishment ritual.

Woman BarberReviewed in the United States on January 4, 2018
5.0 out of 5 stars
An A++ ; everything I want in film and more.
Verified purchase
Michael Haneke, the director of this masterpiece, has said that this film looks at the root causes of evil, and there are some heinous acts committed in this film. I won't spoil anything here, but if you have seen the film, there is a scene involving "earrings" that caused me to have a physical reaction to the horror of what I was seeing. Great acting all around. Beautiful cinematography and direction as well. I could not think of a single flaw in this film. It perfectly assembles all of the story arcs together in a way that feels completely natural. It manages to convey varying tones from humor to sadness to horror without the use of music, which is incredibly impressive. I cannot wait to see more films from this director who I discovered recently from YMS, and I give this film an A+
11 people found this helpful

Sue LewisReviewed in the United States on November 23, 2012
5.0 out of 5 stars
Questions, Questions, Questions...
Verified purchase
To what extent are the actions of an adult influenced by the events of their childhood? When an entire country goes bad, who is really to blame? Is it the evil does themselves, or does it go back further? Do you enjoy a movie that keeps you thinking long after leaving the theatre? If the answer to that last question is yes, then put The White Ribbon by director Michael Haneke on your Must watch list!
Our story takes place as an admittedly unreliable flashback; our narrator states that he pieced together the story through rumor and assumptions. A small village in Germany in the early 1900's is the setting. Right away we are witness to a horrible riding accident: the village doctor is tripped up on his horse by a wire strung between two trees on his usual riding route. Several other violent incidents follow including the beating of a young boy, but there are no suspects for these brutal crimes. Even worse, the villagers don't seem terribly motivated to find the culprits. We then are introduced, on more intimate level, to the villagers themselves and then the horrible really starts to flow! The town Steward beats his son while in the grips of an explosive rage. The Preacher beats his children in the name of piousness. Don't get me started on the Doctor! The only island of human goodness in the film is in the form of the schoolteacher and his sweet courtship of the Baron's nanny. But the teacher is our narrator, so maybe he's just whitewashing his own role in this scenario. Darn unreliable narrators! On the upside, the movie is absolutely beautiful to look at, even when you can't quite look. The black and white cinematography not only fixes our story firmly in the past but also makes some of the horrors we witness a little easier to look at. The director does not rely on crazy camera angles or tricks to tell the story; Realism is the word of the day here. The scenes usually play out in only one or two different shots depending on the number of characters in the scene. There is no traditional background music; all sounds and music that we hear feel natural. The actors in the film look like "real people", they speak like "real people", they move like "real people"; amazing acting throughout this film. These elements come together to form a truly believable feeling when viewing, you lose yourself in the unfolding of events.
The characterizations, especially of the leading citizens of the village were very interesting. The men in positions of power were never referred to by name, only by title; bestowing on them the mantle of archetype which allows them to be completely awful within the scope of their role. That being said, there are not many "bad guys" or "good guys" in this story. Most of our characters feel very human: conflicted, unsure, imperfect. Which brings me to the children: there is a great cinematic tradition of mobs of evil children in films. Don't think for a second that our director will make it that easy for you!
It is interesting to ponder the narrator's assertion at the start of the film that the events of the film may "clarify things that happened in our country". One thinks of the rise of National Socialism in the form of Nazis, the wholesale slaughter of millions of innocent people, etc... I have watched this film several times and I think I come away with a different take on it every time; I will leave it up to you, prospective viewer, to come to your own conclusion. I know that there are many people who do not like movies with open- ended conclusions, and to them I say: This is NOT the film for you! This movie seems to raise many more questions than it answers but, if you don't mind some mental heavy lifting, the rewards are great.

Gary W. PhelpsReviewed in the United States on April 3, 2014
5.0 out of 5 stars
The White Ribbon
Verified purchase
This DVD provides excellent insight to the everyday culture of a small village in Northern Germany. On first impression, it appears the children
are abused and suppressed. By the standards of that culture on the eve of World War I, unquestioning obedience to the school teacher who ran the choir and the adults in families was mandatory. As a consequence, punishment was the expected ritual. However the twist in all of this is the mystery at the center which reveals all of the youngsters - both teenagers and children - are associated with the choir. It should be noted
those of nobility and privilege are not exempted?! A real dividend for the serious viewer, is the content of the entire production reals a culture
that disappeared at the end of World War I, and contributed to the rise of Nazism with the desire for a strong man in tandem with the revitalization of unquestioning obedience for authority. With those thoughts included, the unexplained accidents - do not seem so strange
in that village. I must admit my own prejudice, because I had German Grandparents who were Lutheran but also had a penchant for
unquestioning obedience.

Robert BlenheimReviewed in the United States on July 14, 2010
5.0 out of 5 stars
Michael Haneke's Masterpiece
Verified purchase
In spite of having a style that distances the viewer from his material, and his refusal to provide any answers to the questions his films raise, Michael Haneke is a deeply serious artist on the level of Bergman and Tarkovsky, one who mourns man's inhumanity to man with a compassion for the human condition. And THE WHITE RIBBON is Haneke's masterpiece.

With its atmospheric black and white photography conveying a bleached austerity reminiscent of the great Danish filmmaker, Carl Dreyer, THE WHITE RIBBON is set in a fictitious small town in Northern Germany in 1913 and relates mysterious brutal incidents involving its inhabitants up until the outbreak of World War I. In this film, called by one critic, "THE VILLAGE OF THE DAMNED as directed by Ingmar Bergman," Haneke portrays an authoritarian society where children are subjected to rigid rules and harsh punishments, and adults display different types of paternal power patterns. It is told somewhat like a fairy tale peopled by village icons: the farmer, the pastor, the schoolteacher, the doctor, the baron, etc. and their families -- and we sense the beginnings of fascism in Germany that will lead to the takeover by the Nazis.

The white ribbon of the title refers to what children are forced to wear around their upper arms as a punishment, something we can see becoming red armbands displaying swastikas twenty years later. And rather than forcing pretentious symbolism, Haneke employs concrete human emotional conflict that disturbs and moves the viewers in a way of which only the greatest art is capable.

THE WHITE RIBBON is a film for discerning viewers, one that demands several viewings. It is an amazing magisterial work by a great filmmaker at the peak of his powers.
15 people found this helpful

AnonReviewed in the United States on November 29, 2018
1.0 out of 5 stars
Deeply Disturbing
Verified purchase
I had to watch this film as a requirement for a freshman writing course at NYU. This film is oppressively drawn out, disjointed, and perverse. It is probably the worst film I have ever seen. It doesn't lead one any closer to understanding the causality of evil. It is pure trash parading as profundity.
4 people found this helpful

Only P. NephastusReviewed in the United States on October 4, 2021
5.0 out of 5 stars
Oppressive, black and white, truly German.
Verified purchase
It's a beautiful movie about creepy, oppressive dynamics of people living during the times of serfdom. It very much explained my great grandmother's generation, as well as all the angst my grandma projected towards me,whom she raised.Reputation was everything, a rumor might ruin your life, and monstrosities were safe and well protected by position.

Deanna NaceReviewed in the United States on May 17, 2020
3.0 out of 5 stars
Old fashioned story of a strict up family in days gone by.
Verified purchase
I didn't understand it. The picture was beautiful. I adore black & white & it was crystal clear gorgeous. Old fashioned village with old fashioned families, clothes, & customs. Besides not quite understanding the story I enjoyed the beautiful picture.
One person found this helpful

K. DoyleReviewed in the United States on September 4, 2012
5.0 out of 5 stars
Truth-telling is discouraged under authoritarian rule
Verified purchase
Imagine growing up in a world controlled by cruel, selfish alpha males who insist on their way and know how to make everyone else comply and keep how they feel to themselves. A world where a young person is not even given the opportunity to speak their mind, less any reward for doing so. This is the world of the White Ribbon. The answers to the mysteries of the crimes in the village are of little import here, it is the psychological environment that punishes anyone that might reveal any truth here that is the point, and none of the children dare risk it.

The film is brilliant, subtle and a fascinating study of psychological, dare I say it, "terrorism?". Not for everyone, it's clear that many viewers get stuck on the idea that it's a "whodunit.". This is not Sherlock Holmes, but more Sigmund Freud. It's not a whodunit, get that out of your mind or you'll completely miss what the movie is about.

And I would say the points are timely, in the modern world where the War on Whistleblowing is in full swing, and coverups of crimes at the top are the norm. If the government has nothing to hide, then why so ferociously attack the whistleblower?
3 people found this helpful
See all reviews
Back to top
Get to Know Us
Make Money with Us
Amazon Payment Products
Let Us Help You
EnglishChoose a language for shopping. United StatesChoose a country/region for shopping.
© 1996-2021, Amazon.com, Inc. or its affiliates