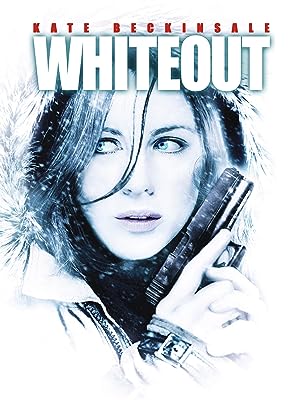 (1,608)
1 h 40 min2009R
As the only law enforcement in Antarctica, U.S. Marshal Carrie Stetko races to solve the continent's first murder before winter traps her on the endless ice with the unknown killer.

joel wingReviewed in the United States on April 21, 2020
3.0 out of 5 stars
Good but not great mystery-thriller set in Antarctica
Verified purchase
Whiteout is a murder mystery set in Antarctica. The film begins with a shootout inside a Soviet plane that crashes, and then flash forwards to the present where Federal Marshal Carrie Stetko (Kate Beckinsale) finds a body frozen in the tundra. It turns out the two stories are related which is what the Marshal finds out during her investigation.

The movie tries to create drama on two levels. First there’s the elements. During one scene new people to Antarctica are given a training course and told in 3 minutes out in the cold they are already dying. That’s brought up later on as Steko is forced out into the elements and gets major frostbite on her hands. There’s also a slasher element as the killer comes out but his identity is hidden by wearing winter clothing and he begins killing people and chases after Steko.

Overall Whiteout is a good but not great mystery thriller. The setting in Antarctica is what sets it apart from others.
C

MsTerryReviewed in the United States on December 3, 2018
4.0 out of 5 stars
It's not Oscars material, sure, but it's PGE ()pretty good entertainment) none the less!
Verified purchase
I guess I'm easy to please. I'm actually not though. Well, I dunno, maybe i am. I love Kate B and Gabriel M, and I loved the shower scene, and the extreme conditions situation that reminded me of burning man, and the fact that they kept at least one female lead... (I actually didn't know about the graphic novels nor that the novel had two female leads, go female leads!) ... but it. was. still. entertaining. enough. for a lazy Sunday afternoon in bed with a cold. There are some super-strong negative reviews, and I think I understand why critics panned this movie. And yet, and yet....
7 people found this helpful

Cassandra RobertsReviewed in the United States on February 20, 2020
3.0 out of 5 stars
Apparently no one studied physics
Verified purchase
Okay premise with an okay cast with an okay script with okay music. It was just okay, overall. A way to kill a couple of hours without having to actually pay attention. The one part that irritated me, though, was the outdoor fight scene. Winds strong enough to blow away a 200+ pounds human body, but only when they're not connected to the tether. As long as they're connected to the tether, the 130ish pounds woman with 20-40 pounds of gear on her can stand upright, just fine. Yeah, no one studied physics in the making of that scene. So, I give it a 3-star rating because it did distract me for a couple of hours while playing a card game, and it wasn't so bad I had to quit in the middle of the movie.
3 people found this helpful

Jo Ann RodgersReviewed in the United States on May 30, 2021
2.0 out of 5 stars
Just okay.
Verified purchase
This movie was okay, but just. I only saw it to see Alex O'Loughlin, and it wasn't very satisfying for that (love him!) There was a really cute party scene with him in the beginning. The rest of movie was interesting for the unusual surroundings but boring for the commonplace story line. There was a major fight scene that was severely marred by the fact that you couldn't see who was who. The acting was okay, nothing spectacular, except Alex was really cute! Come to think of it, was he the only actor who stood out and shone, or did I have that inclination to start with? It wasn't exactly a waste of money. The sound was low. I had to turn the speakers way up, and still missed some of their words. All in all, a just-okay movie to pass the time. I watched it during an early summer, dark and windy night - which helped!
One person found this helpful

D. DugganReviewed in the United States on August 13, 2018
5.0 out of 5 stars
For a relatively uninhabited continent, Antarctica has lots of danger and excitement.
Verified purchase
This movie was a surprise. Kate Beckinsale is well-cast as a US Marshall stationed in Antarctica dealing with two murders and a very large theft. Living in Antarctica has its challenges, and they are well presented during the course of the movie. It is basically a murder mystery complicated by reeealy cold weather, a multiple person conspiracy, and betrayal. I can recommend this film to anyone who likes good acting, a fine script, a delightful cast, and lots of twists and turns.
6 people found this helpful

RalstonReviewed in the United States on July 3, 2022
4.0 out of 5 stars
Movie is notable due to Beckinsale
Verified purchase
Kate Beckinsale does another nice job creating an interesting character - U.S. Marshal Carrie Stetko is at an international research station in Antarctica and an unexplained murder. Mix in a bliss and, hence Whiteout, and the bad guys taking an interest in stopping her investigation leads to some intense moments. As usual, Kate’s acting ability makes the character and the movie.

AlexReviewed in the United States on May 15, 2021
5.0 out of 5 stars
Good All Around
Verified purchase
This was a good movie and I'm glad I rented it. I really like Kate Beckinsale and she did a fantastic job of playing a detective in the middle of nowhere. There's something about mixing a dangerously cold location in a frozen landscape, every kind of danger a place like Antarctica has with an unknown, sadistic murderer, that makes it that much more creepy and frightening.
One person found this helpful
See all reviews
Back to top
Get to Know Us
Make Money with Us
Amazon Payment Products
Let Us Help You
EnglishChoose a language for shopping. United StatesChoose a country/region for shopping.
© 1996-2022, Amazon.com, Inc. or its affiliates