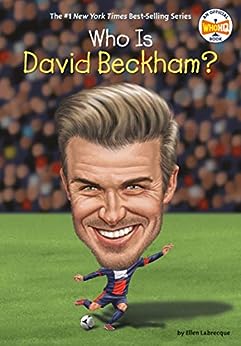 Who Is David Beckham? (Who Was?) Kindle Edition 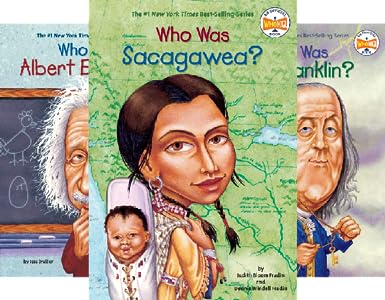 Who Is David Beckham?


Five-­year-­old David Beckham was as excited as if it were Christmas morning! It was September 6, 1980, and his dad, Ted, was taking him to watch his first professional soccer game. They were going to see Manchester United—­one of the most popular sports teams in the world. United was playing Tottenham Hotspur. The two were teams in the English Premier League—­the top professional soccer league in England. David and his dad drove to Tottenham’s stadium, about twenty-­five minutes from their home in Chingford. David wore his favorite red United jersey. When they entered the giant stadium, David gripped his dad’s hand tightly. They were both so excited for the game, they had arrived very early. They were two of the first fans there.

Their seats were high above the field, far from the action, but David didn’t care. He loved every minute of the game. He loved the loud cheering of the fans, and the way the soccer ball moved quickly from player to player. The game ended in a 0–­0 tie. David didn’t get to see any goals, but he had the time of his young life.

“I’d never seen him more thrilled,” Ted said about his son. “To see his face light up had been worth the price of the tickets alone.”

As they left the game, Ted carried his son down the steep stadium stairs. David turned to his father and said, “Dad, one day I am going to play for Manchester United.” Ted laughed and responded, “I’ll come and watch you.”

When David said this, his dad didn’t really believe him. After all, only the very best players play professional soccer—­and only the best of the best play for Manchester United. But David meant it. And from that day on, he worked as hard as he could to make it happen. Growing up, he spent almost every hour he could practicing soccer. Every day, every year, he got better and better.

David Beckham became one of the best and most famous soccer players ever. He played eleven seasons for Manchester United, four seasons for Real Madrid in Spain, six seasons for the Los Angeles Galaxy in California, and one season for Paris Saint-­Germain in France. He also played for fourteen years on England’s national team.

David became a multimillionaire, married a pop star, and became famous for his cool clothes, good looks, and hip hairstyles. But before any of these things happened, David was just a little kid who held his dad’s hand during the matches. He loved soccer more than anything else in the world.


David Robert Joseph Beckham was born on May 2, 1975, in northeast London, England. His mother, Sandra Georgina, was a hairdresser, and his father, David Edward Alan Beckham—­known as “Ted”—­installed new kitchens. David was a middle child. He had an older sister named Lynne Georgina.

Shortly after David was born, his family moved to Chingford, a suburb ten miles from London. Chingford had plenty of grassy parks and open space for kids to play sports, especially soccer.

Soccer is called football in most parts of the world, including England. English people are especially obsessed with soccer. They love to play it, watch it, and talk about it any chance they get. David’s father, and soon David, loved soccer, too.

When David learned to walk, his father brought him to a local park almost daily for a “kickabout,” or to kick the soccer ball around. Ted also bought his son a soccer uniform and a new ball for Christmas every year. As David got older, Ted taught his son all the skills he needed to play the game.

“We would work on passing, crossing, and shooting, for hours and hours,” David said.

David was a small boy, but he was a natural athlete. He was way better at soccer than any other child his age, so he played against older kids instead. Sometimes David even practiced with a local team on which his dad played. The men on the team were three times as tall, three times as heavy, and three times as old as David. When the bigger guys knocked him down, David’s dad told him, “Get up and get on with it.”

By the time he was seven, David had a baby sister named Joanne Louise. His days were filled with soccer. If he wasn’t playing in the park or practicing with his dad’s team, he was playing on his own teams. His bedroom walls were covered with posters of famous soccer stars, especially players on Manchester United, his favorite team.

“All I ever wanted to do was kick a football about,” David has said. “It didn’t enter my head to do anything else.”

David was shy and quiet, but he had a warm and easy smile. He wasn’t a great student. He spent a lot of time in the classroom daydreaming of one day being a professional player. The one class David did well in was art. He was excellent at drawing. Most of his sketches were cartoons of soccer players and games.

David also enjoyed getting dressed up in his good clothes—­not something you’d expect from such an athletic boy. But as young as seven, David had an interest in the latest styles and in men’s fashion. “He loved looking smart and all his clothes had to match,” David’s dad remembered about his son. “If you suggested he put blue trousers with a red shirt, he would go mad.”

David’s parents saw an advertisement that read “Wanted: Football Stars of the Future” in the local newspaper. A man was starting an under-­eight youth travel soccer team and was looking for players. David, who already played on his school team, jumped at a chance to be part of another squad. Forty-­three kids showed up to the tryouts, and only eighteen made the team. David was one of them. The team, called the Ridgeway Rovers, practiced almost every day and traveled as far away as Germany and Holland to play in youth tournaments. This might have been too much soccer for some of the players, but not for David. He loved every minute of it. And he quickly became the star of the team.

“Even at age eight he could hit the ball from every corner of the pitch,” said David’s Rovers coach. “He could strike the ball like a rocket—­from any distance. He was a slight boy and I feared he wasn’t going to be strong enough—­but his skills won through.”


David played on the Rovers for six years. His dad even became one of the assistant coaches. The coaches ran the Rovers like a professional team. The boys all had to wear sweaters and ties when they traveled to away games. When they played, their cleats had to be completely clean before the start of every match.

Most of the boys didn’t like getting dressed up, but David did.

“Right from the start, we tried to make it as professional a setup as possible,” explained David’s dad, “and I’m sure that paid off. It certainly did for David. It showed him how important it was to be properly prepared.”

When David played, his dad was tough on him. If he thought his son played a bad game, he told him so.

Sometimes David cried when his dad told him he played like “rubbish.” But Ted also told his son exactly what he had done wrong. This way, David could fix his mistakes the next game. David understood his dad just wanted him to get better. Later David would even say to his father, “Dad, you were right, you know.”

Then Ted and David would sit down to watch something on the telly—­usually another soccer game.

When David was ten, he went away to his first sleepaway soccer camp, called the Bobby Charlton Soccer and Sports Academy. The camp was in Manchester—­about four hours from David’s hometown. Bobby Charlton was one of the best soccer players of all time and had played for Manchester United.

At first, David was homesick. He called home and pretended he had a toothache. He asked his parents to come get him. Instead, his mom and dad encouraged their son to stay. David ended up loving his time at camp enough to go back the following year.

“David’s love of football was more important than any worries about missing mum or dad,” his father explained.

The second summer at the camp, David, now eleven, became “winner of the week.” This meant that he was named the best player in the entire camp. It also meant he would compete in a skills competition against the overall winners from the other weeks of camp. David was amazing on the day of the competition. He was an artist with the ball, making it do whatever he wanted. He was more skilled than any other boy there. Other parents watching that day kept coming up to David’s mom and dad. “Is that your lad?” they would ask. “The little blond kid? He’s fantastic! Absolutely brilliant!”

David was the overall winner! The prize was a two-­week trip to Barcelona, Spain, to watch Fútbol Club Barcelona’s training sessions, and to play with the club. FC Barcelona is a professional Spanish soccer team. Despite David being so young, his skills made an impression on the Barcelona coach right away.

“I knew from the first time I saw him that David Beckham would be something special,” the coach said. “I must have watched thousands of kids in my time, but as we said goodbye I made sure I would not forget his name.” --This text refers to the hardcover edition.

Ellen Labrecque is a former Senior Editor for Sports Illustrated for Kids and the author of over twenty nonfiction books for young readers, including biographies of Jim Thorpe and Magic Johnson and a number of Who Was? biographies. --This text refers to the hardcover edition.

4.9 out of 5 stars
4.9 out of 5
89 global ratings
How are ratings calculated?
To calculate the overall star rating and percentage breakdown by star, we don’t use a simple average. Instead, our system considers things like how recent a review is and if the reviewer bought the item on Amazon. It also analyzes reviews to verify trustworthiness.

There are 0 customer reviews and 89 customer ratings.