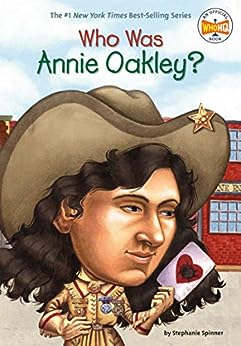 Who Was Annie Oakley? (Who Was?) Kindle Edition 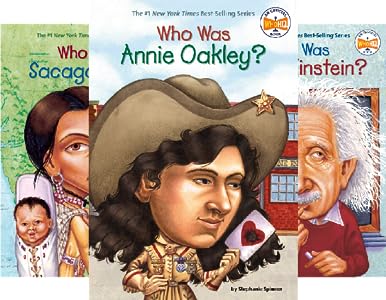 Who Was
Annie Oakley?

Who was Annie Oakley?

Her real name was Phoebe Ann Moses, and she ignored rules all her life. In an age when ladies did not handle guns, she became a sharp-shooting legend. While most women stayed at home with their children, she traveled the world performing for enormous crowds, living happily in a big canvas tent. She was quiet, even shy, yet a brilliant performer.

During her lifetime, 1860–1926, women were paid far less than men, but at her peak she earned as much as the President of the United States. She was one of the best-known women of her age, and the public loved her, yet she was never anything but modest and down-to-earth.

Phoebe Ann Moses was born on August 13, 1860, in Darke County, Ohio. Her birthplace—a rough settler’s cabin built by her father, Jacob—was near the tiny village of Woodland. It was also close enough to the woods for good hunting. Even as a tiny girl, Annie loved to go hunting with her father.

Sadly, Jacob Moses died of pneumonia when Annie was five years old. He left her mother, Susan, with six young children to care for. Susan Moses was a hardworking country nurse. But her wages—$1.25 a week—were not nearly enough to feed and clothe the family. They were very poor.

Annie and her brother and sisters helped out as best they could. They cared for the animals, did the laundry, worked in the garden, baked and cooked and sewed, and looked after the babies. “Somehow we managed to struggle along,” Annie said of those times.

Annie always liked roaming in the woods. They were alive with squirrels, rabbits, chipmunks, turkeys, and pheasants. She began making traps—cornstalks stacked up and tied with string—to catch wild birds. Her father had taught her how to make them, and she was good at it.

Her traps put food on the table every day. “We served them toasted with dressing, fried, broiled, fricasseed, and in potpies, and sometimes they made a nourishing broth,” Annie wrote of the birds she caught.

Grade 3-5-Annie Oakley was born Phoebe Ann Moses in 1860 in Ohio. Her life story is told here-from her fatherless childhood through her marriage to Frank Butler and glory days traveling with Buffalo Bill's show to her death, 18 days before her husband's, in 1926. "Little Sure Shot," as she was nicknamed by Sitting Bull, truly had a one-of-a-kind life. She raised herself up from a poor, abused baby-sitter to a sharpshooting show woman who enchanted Queen Victoria out of her post-Albert funk, no less. However, while her biography is presented in full here, the prose is rather dry and uninviting. The black-and-white cartoons that pad the book are no better. Although two time lines are appended, there is no index. Sue Macy's Bull's-Eye (National Geographic, 2001) is a wonderful photobiography of Oakley that will be far more helpful for reports and is more enjoyable reading.
Anne Chapman Callaghan, Racine Public Library, WI
Copyright 2002 Cahners Business Information, Inc. --This text refers to an out of print or unavailable edition of this title.

Larry Day is the award-winning illustrator of several picture books about American history, including Colonial Voices: Hear them Speak and Voices from the Oregon Trail by Kay Winters and George Did It by Suzanne Tripp Jurmain, He has exhibited watercolors extensively as well. He lives in Oak Park, Illinois.�
--This text refers to an out of print or unavailable edition of this title.
Read more

4.9 out of 5 stars
4.9 out of 5
284 global ratings
How are ratings calculated?
To calculate the overall star rating and percentage breakdown by star, we don’t use a simple average. Instead, our system considers things like how recent a review is and if the reviewer bought the item on Amazon. It also analyzes reviews to verify trustworthiness.
Top reviews

Vince Prybeck
5.0 out of 5 stars Great book for a young girl
Reviewed in the United States on October 2, 2021
Verified Purchase
I bought this book for my 8 yr old granddaughter. She loves it. A great book showcasing a very accomplished and talented woman, who started out young and became world famous by the time she was a teenager. A great role model.
Read more
Helpful
Report abuse

Meredith Shepherd
5.0 out of 5 stars A story about the fascinating life of a fascinating woman.
Reviewed in the United States on May 30, 2018
Verified Purchase
I love this series of books, though some of the books I find disappointing or sometimes boring. This book, however, is one of the great one. I had heard of Annie Oakley of course, but did not know her story. She lived a fascinating life and was a fascinating person. My daughter, who is 9, is genuinely loving this book too.
Read more
Helpful
Report abuse

Big Valley Fan
5.0 out of 5 stars Great Book
Reviewed in the United States on October 6, 2021
Verified Purchase
Love the Who was series for my granddaughter (age 8). Nice to have female role models even from long ago who inspire girls
Read more
Helpful
Report abuse

Amazon Customer
4.0 out of 5 stars Good general story book
Reviewed in the United States on March 13, 2020
Verified Purchase
Appears to have some minor errors with regards to facts and details. Great for general story but not recommended for research (even at the middle school level it appears to be geared to).
Read more
Helpful
Report abuse

buyer
5.0 out of 5 stars Great information
Reviewed in the United States on November 12, 2019
Verified Purchase
We love who was books. Great for the beginner reader to learn stories about famous or historical people
Read more
Helpful
Report abuse

Jane Starling
5.0 out of 5 stars Annie Oakley
Reviewed in the United States on May 19, 2013
Verified Purchase
Who was Annie Oakley, well what a woman. I always wanted to be a cowgirl when I grown-up and reading this book brought back childhood dreams. I have my students read this book, because there is not a lot about woman of the west. This series is good for students who want to read and have fun while working on a book report for their class. I purchased this book for our school library, but I read the book before I put it into the library to be checked out.
Read more
One person found this helpful
Helpful
Report abuse

A&A.S.
5.0 out of 5 stars exactly as expected
Reviewed in the United States on June 16, 2020
Verified Purchase
my 8 year old loved it
Read more
Helpful
Report abuse

Candace K
5.0 out of 5 stars Great biography series for children
Reviewed in Germany on November 16, 2016
Verified Purchase
I love this series! They are great, easy-to-read, fact based biographies that my children have grown up with. Sacagawea was our first book because of my daughter's obsession and from there we moved to other strong historical women, such as Helen Keller and Amelia Earhart. Then we would find subjects to correspond with whatever my kids were studying at school. Really, really recommend this series!!!
Read more
Report abuse
See all reviews

Tags that will help you discover similar books. 7 tags
girls & womenperforming artsbiographies & memoirsgrowing up & facts of lifehistoryfriendship, social skills & school lifewomen
Results for:
Page 1 of 1Start overPage 1 of 1
Previous page
Next page
Where do clickable book tags come from?
Book tags are created from a variety of sources, some of which are customer-generated. Amazon is not legally responsible for the accuracy of the tags represented. If you are an author or publisher and would like to remove a tag associated with your title, please contact your vendor manager or publisher support team.