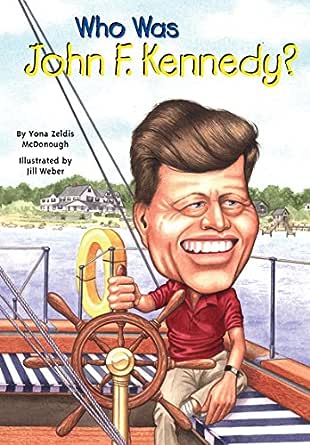 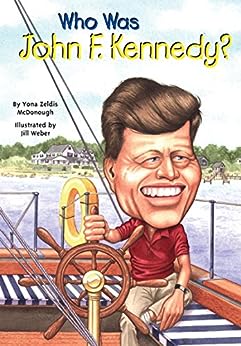 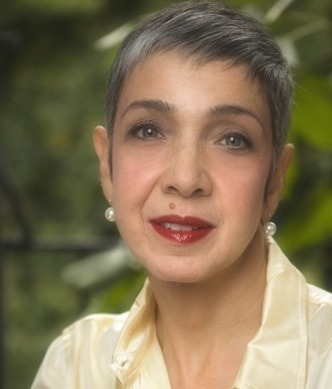 Who Was John F. Kennedy? (Who Was?) Kindle Edition 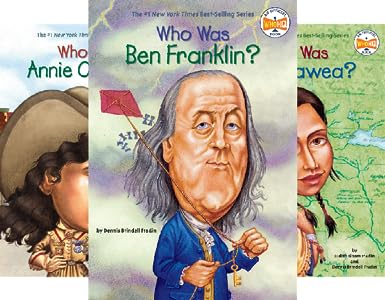 To my children, James and Katherine
McDonough—Y.Z.M.

Who Was John F. Kennedy?

The small boat sped quickly along in the dark. It was a hot night in August. The thirteen men onboard were quiet and tense. Their mission was a scary one: They were looking for Japanese warships in the Pacific Ocean.

Suddenly, there was an explosion.

The small boat was ripped in half by a Japanese destroyer returning to its base. Two of the crew were killed instantly. The other eleven men clung to pieces of the boat until morning. Then the wreckage began to sink. The captain decided they all must swim to the safety of a nearby island. The men didn’t think they could make it.

“Will we ever get out of this?” asked one.

One of the men was burned so badly that he could not swim. He told the captain to save himself and the other men. But the captain would not leave the wounded man. He swam for five long hours with the burned man on his back. When they reached the island, the captain discovered two natives and a canoe.

He also discovered a coconut shell on which he carved these words:

HE CAN PILOT 11 ALIVE

He gave the shell with the message to the islanders who went by canoe to another island nearly forty miles away. Six days after the patrol boat was destroyed, the brave and quick-thinking captain and his crew were rescued.

On May 29, 1917, a baby boy was born to Joseph P. Kennedy, a wealthy, Irish-American businessman, and his wife Rose. They named him John Fitzgerald Kennedy, in honor of Rose’s father—John F. Fitzgerald.

“Honey Fitz” as he was called, had been a popular politician and a former mayor of Boston. When his daughter Rose began dating the young Kennedy boy, Honey Fitz was not so sure he approved. But the couple kept seeing each other and, eventually, Honey Fitz was won over by Joe’s hardworking and ambitious nature.

IRISH IMMIGRATION TO THE UNITED STATES

IN THE 1840S AND 1850S, MORE THAN ONE MILLION IRISH IMMIGRANTS SAILED TO AMERICA. BACK IN IRELAND, THE POTATO CROP HAD FAILED. WITHOUT THEIR STAPLE FOOD, AT LEAST ONE MILLION PEOPLE DIED OF STARVATION AND DISEASE. THE IMMIGRANTS WHO CAME HERE WERE CRAMMED INTO CROWDED, DIRTY SHIPS. NEARLY 20 PERCENT OF THEM DIED BEFORE THEY ARRIVED. THE ONES WHO DID WERE CALLED THE “FAMINE IRISH.” LIKE MANY NEW IMMIGRANT GROUPS, THEY FACED DISCRIMINATION AND HATRED. THEY COULD NOT EASILY FIND JOBS OR PLACES TO LIVE. SIGNS WITH THE WORDS “IRISH NEED NOT APPLY” WERE COMMON. THEY TOOK THE ONLY WORK THEY COULD GET: LAYING RAILROAD TRACKS, SHOVELING COAL, DIGGING CANALS, AND CLEARING SWAMPS.

Jill Weber lives on a farm in New Hampshire with her husband and their pets. She has illustrated many books for adults and for children.
--This text refers to an out of print or unavailable edition of this title.

4.8 out of 5 stars
4.8 out of 5
409 global ratings
How are ratings calculated?
To calculate the overall star rating and percentage breakdown by star, we don’t use a simple average. Instead, our system considers things like how recent a review is and if the reviewer bought the item on Amazon. It also analyzes reviews to verify trustworthiness.

Robert Cernuda
VINE VOICE
5.0 out of 5 stars Great informational book on JFK!
Reviewed in the United States on April 25, 2020
Verified Purchase
Our family used this book for a school project with our PRE-K students. We enjoyed the content in the book but it was a little above their level. This book would be great and informational for slightly older kids who need to learn about presidents for school or just personal interest!
Read more
One person found this helpful
Helpful
Report abuse

Jeff J
5.0 out of 5 stars Great book for my son, needed to add some history to his early reading
Reviewed in the United States on September 3, 2020
Verified Purchase
We like to alternate our son's reading of books he would normally pick up with some that are about historical facts to mix things up and keep his reading interest and these books do the trick. He really enjoys them and starts up additional conversations.
Read more
One person found this helpful
Helpful
Report abuse

JavaArabica
5.0 out of 5 stars A great book and a great way for your student to learn about a past president.
Reviewed in the United States on April 25, 2014
Verified Purchase
My fourth grader needed to research a past president and her teacher assigned JFK to her. We found this book online and she read it over a weekend. It was easy to read and she was able to retain the information easier than just looking at facts on the internet. She truly felt she knew about JFK and now she wants to know more about Jackie. Apparently she was a fashion icon and so that was all it took for my daughter. What a great way to learn history and to learn about a president that was frozen in time at the prime of his life due to his premature death. Highly recommended for your student.
Read more
2 people found this helpful
Helpful
Report abuse

Millie
5.0 out of 5 stars Great for younger kids
Reviewed in the United States on March 3, 2020
Verified Purchase
My son is fascinated with JFK. Since he is only 8 years old I figured this book would be great for him . He loves it!!! Very informative .
Read more
Helpful
Report abuse

Retired Soldier/Sailor.
TOP 1000 REVIEWER
5.0 out of 5 stars *(Bought as a gift.)*
Reviewed in the United States on January 4, 2021
Verified Purchase
*=denotes my WIFE loved it, and read it in the bathtub.
Well-written, historically accurate, and my wife enjoyed the illustrations.

Lisa Loo
4.0 out of 5 stars Great little book
Reviewed in the United States on May 4, 2016
Verified Purchase
Great little book. We buy lots of Who Was books and use them for homeschool enrichment. Short chapters, larger font, and lots of pictures make these books an easy read. This was a great addition to our collection.
Read more
3 people found this helpful
Helpful
Report abuse

Ken E Smith
5.0 out of 5 stars Love This Series
Reviewed in the United States on September 11, 2020
Verified Purchase
Purchased them for my grandsons and homeschooling. Their mom, a certified teacher, loves them, too!
Read more
Helpful
Report abuse
See all reviews

ferret lover
5.0 out of 5 stars Five Stars
Reviewed in the United Kingdom on January 1, 2017
Verified Purchase
JUST FINISHED THIS BOOK IT WAS GREAT WOULD TELL EVERY TO BUY IT.
Read more
Report abuse

Mrs. Patricia A. King
5.0 out of 5 stars An excellent read!
Reviewed in the United Kingdom on May 16, 2013
Verified Purchase
This was a very quick and compelling read both for our son and us as parents. We would have liked a few more photographs rather than line drawings, but the quality of the book has inspired us to look at others in the series.
Read more
Report abuse