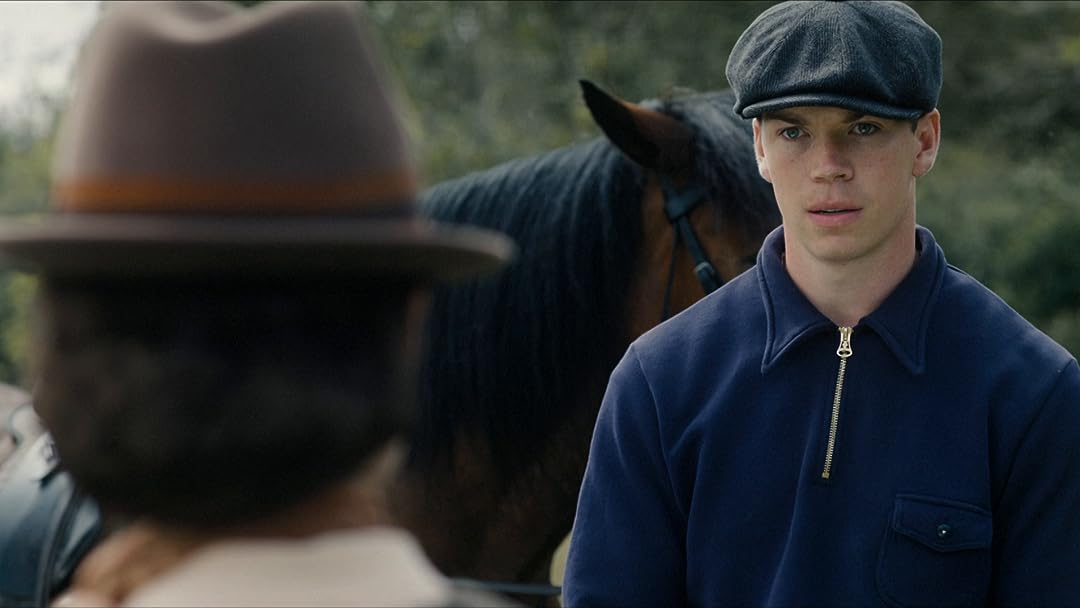 Why Didn't They Ask Evans

Season 1
(106)
2022X-RayTV-MA
In Hugh Laurie’s clever adaptation of Agatha Christie’s beloved novel, the mysterious death of a stranger prompts amateur detectives Bobby Jones and Frankie Derwent to set out to find the meaning behind the dead man’s final words: “Why didn’t they ask Evans?” Starring Will Poulter and Lucy Boynton.

Kass McGannReviewed in the United States on April 14, 2022
5.0 out of 5 stars
Please have Hugh Laurie direct a new "Partners in Crime" starring these two kids!
This is a wonderful adaptation of one of my favourite Christie novels. A few small details are changed, but largely the story is the same as the book. And they keep the time period firmly in the mid-1930s, unlike that absolutely monsterous transmutation they did on Marple in 2009 where they set it in the 50s, majorly changed the plot, changed the culprits, and made Miss Marple the detective. This is true to the original, the actors play Frankie and Bobbie as they were originally written. (No, Frankie is not too much of a feminist. She's just like Christie wrote her in 1935!) It is a complete delight. Bravo, Mr. Laurie. You've done it. Please redo Partners in Crime. You wouldn't let Tommy and Tuppence down!
16 people found this helpful

EricReviewed in the United States on April 18, 2022
5.0 out of 5 stars
Captured that Christie feel
This has all the feels of an Agatha Christie book. You don't feel rushed into the drama, you are allowed some time to get to know the players, something many shows fail to do. Christie did it so well, and it was well captured here. The only fault with this series is that it was so engaging and well played, that I'm going to be unhappy with all of my current watching options.
15 people found this helpful

Amazon CustomerReviewed in the United States on April 28, 2022
5.0 out of 5 stars
Hugh Laurie can direct everything from now on
Hugh Laurie has a future in directing teen mysteries, which is really what this is, but I enjoyed every second of it. Agatha Christie purists may not like it, but for me it hits all the 'updated for a younger audience' notes without being overly over about it, up there with 'Enola Holmes' (new requirement for period mysteries: killer in a bowler hat).

I've tried to watch Hugh Laurie over the years but have never been able to do it, just because I can't get with the 1000%-acerbicness thing that he does. But everything that he does (Cambridge Footlights with Emma Thompson, comedic timing, dark wit, precise acting) is also really well put to use here, which ultimately shows how good he is at all of it. In direct comparison to Stephen Merchant, who directed Fighting With My Family, which I also just watched on Prime and found extremely disappointing for someone at his level.

'Why Didn't They Ask Evans' has all of what a writer-director-actor 'should' be, which is to say, tightly directed and produced with only the barest bit of a cameo. Now I'm going to imagine how much better every mainstream Kenneth Branagh film might have been if Hugh Laurie had directed it. .

One more thing. I see so many reviews online that complain about how 'woke' a movie or TV show is. People use the word 'woke' like an insult, like equal treatment for people is something to sneer at.

Well, diversity actually matters. The problem with Stephen Merchant's 'Fighting With My Family' is that not only did it ultimately look like it was patched together from various film sets with varying budgets, it also treated all of its brown and Black supporting characters like they were dumb, clueless comic foils in a way that wouldn't have been out of place in the 1940s and ’50s.

Hugh Laurie and Kenneth Branagh do have one thing in common that is really admirable: They cast people of color in supporting roles who are just as exciting to watch as the lead actors. I love seeing Nonso Anozie in every Kenneth Branagh film, and Jonathan Jules in this film pretty much erased Merchant's heinous racial-stereotypes misfire of 'Fighting With My Family'.

Thank you Hugh Laurie for doing such a great job with this. And in the middle of a pandemic, no less!

Scott SilvermanReviewed in the United States on April 12, 2022
5.0 out of 5 stars
Why Didn't They Make Other recent Christie Adaptations this Good?
Confection. Perfection. Somebody ought to give the crew that made this version lots of pots of money so they can make more. Casting and acting quite excellent. While you're at it.. you might as well watch the new KB version of 'Death on the Nile'. Much much better than the reviewers would have you believe. Felicitations to all involved in the realization of these adaptations.
12 people found this helpful

Fariha RashidReviewed in the United States on April 13, 2022
5.0 out of 5 stars
A+ Agatha Christie Adaptation
The original story was adapted very well, but the best part of the series is the cast - such great chemistry. The show overall was well-paced and beautifully shot. Much, much better than the 2009 Miss Marple version!
13 people found this helpful

Amazon CustomerReviewed in the United States on April 13, 2022
5.0 out of 5 stars
Surprisingly delightful
As a devoted Christie fan, I will (warily) give almost any adaptation a chance. I approached this one with a spirit of cynicism tinged by the recent Sarah Phelps/Kenneth Branagh adaptations, but am so pleasantly surprised. The production value, acting, chemistry between characters, amendments to the original plot...all are top notch. This is just a delight to watch and I recommend it to Christie fans and general viewers without hesitation.
9 people found this helpful

History ManReviewed in the United States on April 13, 2022
2.0 out of 5 stars
Could be a lot better
Frankly, as dated as it may be, I prefer the 1980 TV version starring Francesca Annis and James Warwick. That film is far more faithful to Christie's book and much easier to follow. The current version takes liberties with the original and creates or changes characters, including names. The ending is so rushed that many viewers may not quite get what took place, who Evans was, what Evans knew, and why no one asked Evans. It's all wrapped up hurriedly in a final exposition scene in a prison cell that does not really make things all that clear. After investing 3 hours in this series the audience deserves a clearer and longer explanation and answer to the riddle. Finally, this production is not helped at all by Lucy Boynton in the role of Frankie. Her acting skills are marginal at best and she does nothing to bring the character to life. She seems more like a clothes horse modeling the many costumes she wears. She also needs lessons in elocution and enunciation. I could not understand half her lines because she slurred her words and talked too fast, as if all her lines are off-hand wisecracks. I had no problem understanding the other actors.
5 people found this helpful

M GachiReviewed in the United States on April 13, 2022
5.0 out of 5 stars
Beautifully imagined and Perfectly directed.
after recent disasters like Ken Branagh butchering of Death on The Nile and Murder on The Orient Express, or Sarah Phelps absolute inept interpretation of Agatha Christie's works like The Pale Horse, Ordeal by Innocence and ABC Murders, I was very skeptical about this mini series by Hugh Laurie.
But I must say he came thru and delivered an masterpiece. Authentic to the book and era. Direction, dialog and cinematography were perfect. The pace is just right. Not too rushed and not too slow and boring.

I would definitely recommend to all Agatha Christie fans and lovers of mystery genre.
6 people found this helpful
See all reviews
Back to top
Get to Know Us
Make Money with Us
Amazon Payment Products
Let Us Help You
EnglishChoose a language for shopping. United StatesChoose a country/region for shopping.
© 1996-2022, Amazon.com, Inc. or its affiliates