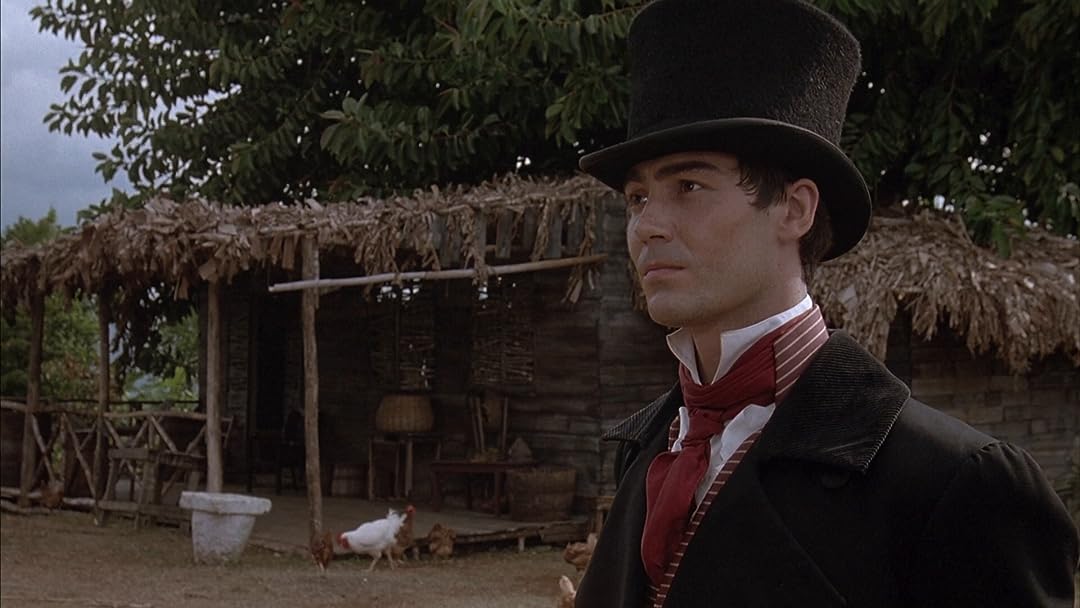 (185)
5.71 h 38 min1993R
A prequel to "Jane Eyre." An Englishman in nineteenth-century Jamaica falls into a tortured marriage with a native Creole.

taajReviewed in the United States on August 14, 2019
2.0 out of 5 stars
Disappointed
Verified purchase
I heard this was racy. Maybe for its time, but it's pretty tame now.

I wanted to see the backstory to Mr. Rochester and his wife. This was really a disappointment. It doesn't really explain the disparity between the character in this movie and the character in Jane Eyre. I really wanted to love this.

JOSE J GONZALEZReviewed in the United States on September 10, 2018
4.0 out of 5 stars
Not a great film but, quite enjoyable
Verified purchase
I watched this film in a movie theater in NYC when it was released. Loved it so, I bought it on VHS. When I bought the NC17 on DVD, the disc would not play on my regionless Pioneer! It plays on my new DVR player Amazon just delivered. It is great to be able to watch the NC17 version.
2 people found this helpful

KP in TucsonReviewed in the United States on December 21, 2018
4.0 out of 5 stars
Interesting
Verified purchase
If I wasn't curious about supposed background for Jane Eyre, this wouldn't have been very interesting. Kind of like what the book "Healthcliff" was to Wuthering Heights, or the books "Scarlett" and "Rhett Butler's People" were to GWTW. None of them as good as original story, but interesting spin-offs.
One person found this helpful

Gil stirReviewed in the United States on August 16, 2019
3.0 out of 5 stars
Adaptation of a classic but the director forgot the scenery was the star
Verified purchase
Not enough time spent on the scenery otherwise evocative but you have to supply the memories of the beauty of the place yourself ,
One person found this helpful

A. MasionReviewed in the United States on December 13, 2005
3.0 out of 5 stars
I tried, but I really couldn't understand.
Verified purchase
For the record I've never read "Wide Sargasso Sea" although I've read "Jane Eyre" quite a few times. I've always figured Edward Rochester was a bad man. Every relationship he had with women before his involvement with Jane ended badly. With one lunatic wife and one dead mistress...Well...

The movie is not consistent with Rochester's portrayal in Jane Eyre or his explanations of his marriage to Antoinette. The implication is that Antoinette was descended from lunatics and was also a notorious adulteress (there were even hints her insanity was the result of syphilis in "Jane Eyre"). Antoinette's brother in the novel, Richard Mason, is completely eliminated as a character.

In the movie, Antoinette is presented as a lonely orphan with no close family to cover up her alleged madness and "vices".

There are other inconsistencies that just stray too far from Rochester's explanations as well as Bronte's novel to keep a true Bronte fan engaged.

Antoinette and Amelie are two-dimensional characters, competing for the sexual favors of Antoinette's loser husband who doesn't particularly like or respect either one of them.

It looks like the brains behind the film could not decide whether Edward Rochester was a racist libertine or a victim of circumstance. The balance is tipped by saddistic behavior (i.e., killing animals and brutalizing his young wife.) He is basically a fortune-hunter who does not hesitate to despise his wife's cultural differences once he's acquired her wealth and properties.

I think the writers hoped to create a theme of Black/African female empowerment by having Amelie seduce Rochester, then accept a gift of money from him and walk out of his life to become a whore.

Also, it is never clear to me when/how Antoinette went mad. She does not strike me as mad or even unstable in the course of the film although she does portray classic alcoholism and depression after her husband's abandonment. Surely no one presumes she is psychopathic because she tried to club Rochester with with a glass bottle and spit in his face after he had loud noisy sex with Amelie just outside her bedroom!

Even the portrayal of Daniel Cosway is sort of weird. One minute he appears to be affectionate towards Antoinette (his half-sister) and the next he is bound and determined to do everything he possibly can to ruin her marriage and destroy any opportunity for her happiness.

The two actresses who portray Aunt Cora and Christophine deliver solid performances and Lombard does her best with her role and makes the most of her improbable lingerie (midriff-baring camisoles were not around in 1840.)

city girlReviewed in the United States on July 21, 2005
5.0 out of 5 stars
Feminist Response to Jane Eyre
Verified purchase
This is a great response to Bronte's Jane Eyre. Here we get Edward Rochester's wife's version of the story. She portrays Rochester as a second son who travels to the Caribbean seeking a rich wife. Instead of the Byronic hero that Bronte depicts, here Rochester is a young, selfish, Englishman who disregards the needs of his wife as well as all the pledges he made to her prior to her acceptance of his marriage proposal. Typical of his class, he indulges his desires selfishly. After his brother dies unexpectantly, he inherits his family's money and position. Then contrary to all his previous promises he uproots the youthful and very innocent Antoinette (Bertha in the Bronte novel) and drags her off to his foriegn and bleak homeland. I use this movie often in my Women's Lit courses in conjunction with the 1944 version of Jane Eyre. The Wide Sargasso Sea has some rather erotic love scenes that the more conservative of my students find offensive, but I always make it available to my students with the requisite disclaimers. It is a lushly beautiful film. Its setting and cinematography alone make it worth viewing.
11 people found this helpful

Paulette CarterReviewed in the United States on November 20, 2018
5.0 out of 5 stars
Excellent read! A possibility prelude to “Jane Eyre”
Verified purchase
I love this book that I had to read For English class but so worthwhile the forerunner of Jane Eyre!
See all reviews
Back to top
Get to Know Us
Make Money with Us
Amazon Payment Products
Let Us Help You
EnglishChoose a language for shopping. United StatesChoose a country/region for shopping.
© 1996-2021, Amazon.com, Inc. or its affiliates