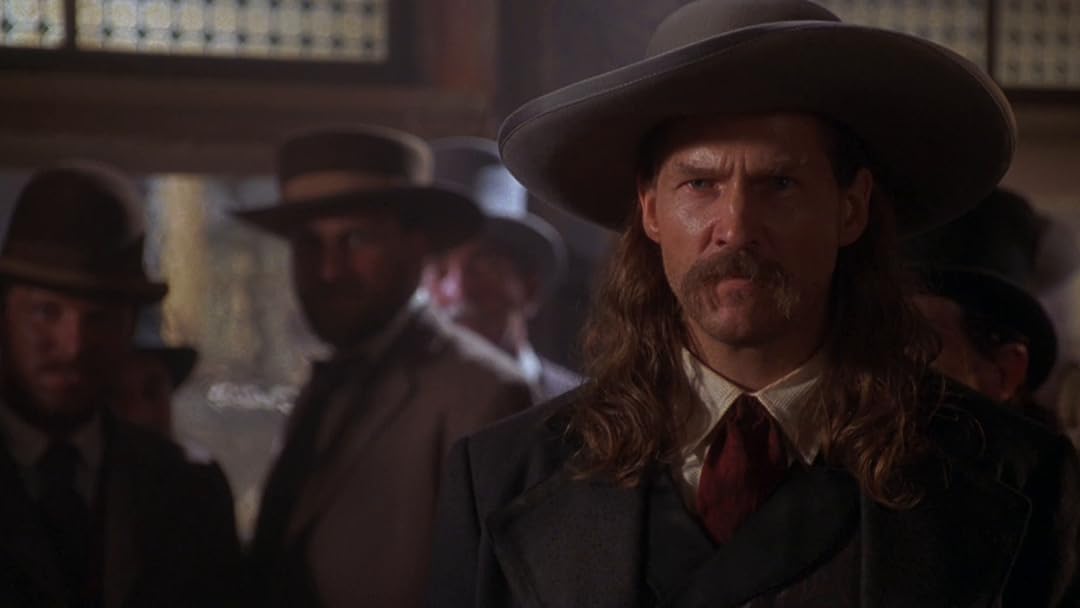 (524)
1 h 37 min1995X-RayR
Jeff Bridges is Wild Bill Hickok, the hard-drinking, quick-shooting gunslinger who faces the showdown of his life in this exciting, visually stunning tale that co-stars Ellen Barkin as Calamity Jane.

michael g.Reviewed in the United States on March 8, 2020
3.0 out of 5 stars
Hollywood is unable to tell the truth
Verified purchase
As I have said in other reviews of Westerns, Hollywood is unable to tell the real story. They think the facts regarding historical western figures, i.e. James Butler Hickok (Wild Bill), Wyatt Earp, John (Doc) Holliday, etc., are boring and need enhancement, whereas I feel their embellishments and outright lies are totally ridiculous and destroy whatever few qualities the film in question has retained. The true murderer of Wild Bill was NOT related to one of Hickok's former lovers, as the movie would have you believe. And Jane Canary, a.k.a. Calamity Jane, NEVER looked as good as Ellen Barkin. The ego involved by Hollywood, thinking they could substitute their half-truths and lies for fact, and make it more interesting than the truth is beyond my understanding and, quite frankly, appalling.
10 people found this helpful

TigerlillyReviewed in the United States on July 11, 2018
2.0 out of 5 stars
Shoot Me Now!
Verified purchase
Honestly, I couldn't get through the whole thing. I watched more than half and had to pull the plug. On the good side, Jeff Bridges does a fine acting job. However, the story moves slowly and ploddingly along; a good example of which is the first 22 minutes which consists solely of a completely unnecessary string of scenes in which Bill kills people in gun fights listed with places and dates. When he gets to Deadwood, I thought, OK, they're going to settle into a story. But they don't. There are no relationships built. Bill mostly sticks to himself, ruminates, smokes opium and has flashbacks. It's boring. Not only that, but they are really playing fast and loose with what known facts there are. They didn't even bother to get Dave Tutt's death scene right. Personally, I'd recommend watching "Deadwood". It's a lot more entertaining and they stick more closely to the known facts about Wild Bill's murder.
12 people found this helpful

TSReviewed in the United States on July 12, 2018
2.0 out of 5 stars
A few glaring annoyances make it hard to enjoy.
Verified purchase
One star off for Ellen Barkyn's miscasting and poor acting as Calamity Jane.

One star off for the world's longest pre-murder confrontation, which doesn't even end with a murder.

One star off for a scene where Wild Bill fires 30 shots in a row from two six-shooters, with no reloading.

If you want to see a much more compelling fictionalization of Deadwood, watch the HBO series "Deadwood" on Prime. Coincidentally, Keith Carradine, who plays Bill Cody in this film plays Wild Bill Hickock in Deadwood. The only two knocks I have on Deadwood are that the actress who plays Calamity Jane in that series is even worse than Ellen Burstyn, and the series got dropped by HBO before the story ended (there are rumors of a movie to finish it up however).

John ReeseReviewed in the United States on February 5, 2020
2.0 out of 5 stars
Time killer -- not history
Verified purchase
As for history, this movie is pure makeup history. The story in Abilene showing Bill shooting his deputy is true and the most correct part of the movie. After this movie goes crazy. Calamity Jane loved Bill but he knew his life was going to end because of his eyesight. For gunfighter, his loss of eyesight will be his downfall and his death. Bill was lost his power over because he was another town bum. So when he sits in a current game the only chair open has a side door and the bar where Jack was drinking. This is the door which Jack runs from the bar. He was caught later in the day, the court found not guilty but other legal trial found Jack guilty and Jack was hanged in Dec.
3 people found this helpful

JenniferReviewed in the United States on January 5, 2021
3.0 out of 5 stars
Who Researched This?
Verified purchase
First, there were a few fun scsnes, such as the Wheelchair Showdown scene. Jeff Bridges did a fine job as Hickok. But the first half was simply scenes strung together with dates and places typed onscreen. Bill Cody and Hickok never referred to Natives as "Injuns" and treated them with respect. There were no relationships built, including with Calamity Jane. The ending was disappointing. SPOILER ALERT! When McCall shoots Hickok, you don't get a real scene of it and it ends at jane screaming "No!" You don't see the townsfolk chasing McCall and the aftermath. It simply goes to the funeral. I don't blame any actors for a not-so-great movie: they did not write it. Altogether, RENT it rather than buy it.
2 people found this helpful

By CJs PirateReviewed in the United States on June 19, 2018
5.0 out of 5 stars
Bridges IS Hickok
Verified purchase
I really like Westerns, especially those featuring the "Biggie's", Wild Bill, Buffalo Bill, Doc Holliday, Wyatt Earp... Jeff Bridges truly gets a grip on playing Bill. (If you don't believe it, watch RIPD. He's perfect there.)

David Arquette is wonderful as the snivelling Jack McCoy. There are certain people who can pull that off. Arquette is gifted to be able to show that type of character.

AmazonerReviewed in the United States on July 6, 2019
2.0 out of 5 stars
OMG - BORING!!
Verified purchase
I very very rarely turn a movie off once I start watching. I made an exception for this movie. I like western themed movies. It has Jeff Bridges, who I like, Ellen Barkin, who I like, and was a story of some interest to me (Wild Bill). The movie could not get out if it's own way. Gratuitous violent scenes with no apparent connection to the story. Boring dialog and special effects befitting of a movie from 1970, not 1995. At one point, I figured I would watch the rest of the movie if I was more than half way through. I was about 30 minutes into the 90 minute movie. Off it went. Save yourself time. Find something else.
One person found this helpful

Lawrence RobertsReviewed in the United States on July 27, 2018
2.0 out of 5 stars
Good Movie - But Nothing to Do with the Truth of Hickock
Verified purchase
terrible misrepresentation of Hickock's life, No, we dont look for Hollywood to provide us with history, but this was over the top in grossly misrepresenting it. Calamity Jane was an extraordinarily ugly and manly looking woman. There are photos. Apparently she and Hickock were acquaintances in Deadwood, but I find no record of more. McCall shot Hickock over revenge for Hickock having killed his father - nothing to do with his mother. I actually think this was a good and entertaining movie. But why not just make a good and entertaining fictional movie instead of concocting total and gross lies about about real people?
5 people found this helpful
See all reviews
Back to top
Get to Know Us
Make Money with Us
Amazon Payment Products
Let Us Help You
EnglishChoose a language for shopping. United StatesChoose a country/region for shopping.
© 1996-2022, Amazon.com, Inc. or its affiliates