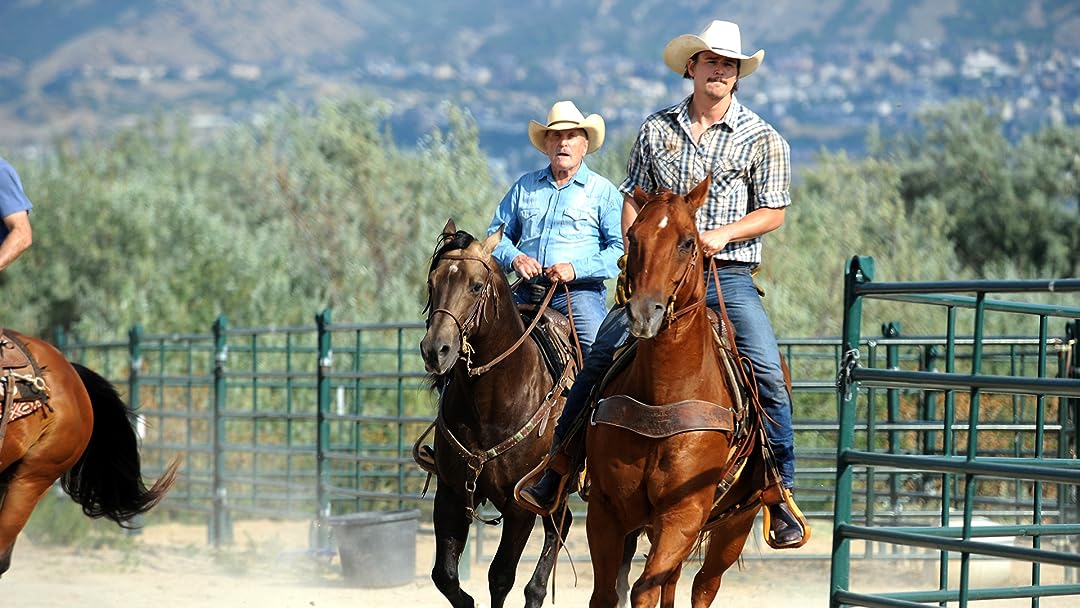 (775)
1 h 43 min2015X-RayR
A detective opens up a fifteen-year-old missing persons case, and begins to suspect that the missing boy was murdered, and that a local rancher was involved.

lapisblueReviewed in the United States on June 30, 2015
2.0 out of 5 stars
DON'T BOTHER: SAD TO SAY IT'S A DISAPPOINTMENT BIG AS TEXAS...except for HARTNETT and FRANCO
Verified purchase
Full of great, wide-open Texas ranch landscapes, but sadly, just as packed with terrible writing and some of the worst acting imaginable...exceptions were solid portrayals of brothers surviving a fractured horse ranching dynasty, Josh Hartnett and James Franco. While this movie may be a historic film curio for other reasons down the road, don't spend your money or your time watching this one. To see Duvall at his edgy elder best in a crowning achievement of starring and directing, watch his marvelous APOSTLE instead.

But here, in WILD HORSES, where apparently locals and family members were used, instead of seeming naturalistic, both the integrity of the story --its glue-- and overall believability of actors and non-actors woodenly reciting bad lines, it all morphs into, well, a trainwreck. Everything important beyond the magnificent landscapes falls prey to the bad acting and writing. Apart from performances by Franco and Hartnett, this movie played worse than many a grindhouse B-movie or film student shaky cam film I've seen in the last few years.

As a long-time admirer of Duvall, who for more than half a century, from TO KILL A MOCKINGBIRD to THE GODFATHER to APOCALYPSE NOW to LONESOME DOVE...to Duvall's own wonderful APOSTLE, has been one of our great American actors, I have to say based on this and his previous film about an elder cowboy getting lost in a border town, it's long since time this screen legend stepped back, stopped listening to a bunch of *yes men*, and allowed others to write and direct.

Having lived in Texas in ranching country years ago I know these people, and the badly written lines and often wooden acting do not give the people and place the dignity they deserve. Makes me sad that no one close to this living legend could delay the film's release in its present state. No doubt bringing in a new editor and exchanging some of the fine nature footage for some of the badly acted/badly directed scenes could make it work.

Jodi Reviewed in the United States on July 25, 2020
1.0 out of 5 stars
Avoid at all cost
Verified purchase
This is just BAD altogether... Even James and Josh couldn't save this film. The acting and writing are wretched... This is without question one of the worst movies I have ever seen. I thought that the lady who play the Texas ranger was related to Robert Duvall because I don't know why else she would have been cast, her acting is monotone and flat. Robert Duvall should be ashamed for wasting money to do this egotistical film that only made him look like a character of himself. Really sad and disappointing. Avoid at all cost. Go watch Wind River or Open Range.
6 people found this helpful

Jane HayesReviewed in the United States on July 15, 2020
1.0 out of 5 stars
Horrible writing. Duvall needs to retire.
Verified purchase
This had horrible writing. I was wondering what was wrong with Duvall while watching the movie. "Is he this desperate to make a move? Can he not act any more? It was like he couldn't remember what he was supposed to do or say or why he was there. Why is the writing so bad?" Then the credits came on and said he was the writer and it was his film. He needs to not do this any more. Time for him to retire. The only good thing is James Franco looked GOOD in this movie. He is a good actor. To bad women he worked with are saying he is a sleezeball. Angie Cepeda did a good job too. Horrible story with worse writing.
5 people found this helpful

HelperReviewed in the United States on March 7, 2018
4.0 out of 5 stars
Hidden Gem
Verified purchase
I really liked this movie. I liked the uniqueness of the 3 brothers personalities and how differently their relationships with their father Robert Duval is. Especially James Franco and Josh Harnett. ***Spoiler***There is a murder mystery here, kind of. It seems it was an accident, but Robert Duvall made a really bad choice to bury James Franco's lover after he accidentally killed him. It would have saved him and several others a lot of grief if he had just called the Sheriff and deal with it then. But then there wouldn't have been much of a storyline. It's well worth your time. I do recommend highly.
6 people found this helpful

Jim BorgerReviewed in the United States on June 20, 2015
4.0 out of 5 stars
Not for everyone but
Verified purchase
Duvall has done a number of quirky independent type movies that I like very much. They aren't the slick, high budget movies Hollywood normally turns out but more "true to life". The actors are more like real people. In this one Duvall's character is an older rancher approaching the end of his life and getting his affairs in order. He makes amends with a gay son that he kicked out of his life years before and sits down with his children and attorney to explain his will and how he is dividing his property. Intertwined with his story is one of a female Texas Ranger investigating a case that he may or may not know something about. I didn't see the ending coming at all.
27 people found this helpful

Ima KarenReviewed in the United States on September 7, 2021
1.0 out of 5 stars
Disappointing Turnout From Duvall
Verified purchase
I usually love Robert Duvall's films, especially Westerns, but this isn't one of those films. This was written, produced, and directed by Duvall, who also stars in it, and he seems to have bitten off more than he can chew. The script was slow and poorly written. The acting was bad with the worst being Duvall's real-life wife, Luciana Pedraza (now I know how she got the gig). She delivered her lines in a wooden monotone throughout, first with a West Texas accent and then a Mexican accent. Duvall seems to have fallen into the bad habit of playing essentially the same character--a senile, pissed off Augustus McRae--and it's annoying. Other reviewers raved about the vast West Texas landscape, but even Texas is miscast as this was filmed in Utah. The title of "Wild Horses" makes no sense since the movie isn't about horses, wild or otherwise; Duvall's character just happens to own a horse ranch. The only thing I liked about the movie was the horse Duvall rode, a nice sooty buckskin Quarter horse. Too bad the movie wasn't about the sooty buckskin and the West Texas landscape, then it might have actually been good.
3 people found this helpful

Sir RalphReviewed in the United States on September 7, 2019
4.0 out of 5 stars
I really enjoyed it
Verified purchase
I certainly enjoyed this more than most movies I've seen recently. It is rather slow moving character development. But the characters and story are interesting enough to grab my attention, which is why I enjoyed it. That and the good acting.

Maybe keep in mind that almost no movies being released these days are interesting to me.
7 people found this helpful

V. FoxReviewed in the United States on July 16, 2020
3.0 out of 5 stars
5 stars for the amazing views
Verified purchase
The movie seemed not very well thought out. The way the cast and characters in the movie were used seemed a little unbelieveable. The movie unfolded as if someone was telling their life story one incident at a time with no fluidity to their story. About half way through the story one realizes how the movie must end. I usually feel good or bad feelings about the main character in a movie, but the cold heartedness of what lead up to the suicide just left me feeling emotionless.

If this was based on a real story, the listener didn't convey to the writers the depth or breadth of the interpersonal relationship existing between the characters. The only character actually showing any type of emotion in this movie was Jimmy's mother at the end of the movie.
See all reviews
Back to top
Get to Know Us
Make Money with Us
Amazon Payment Products
Let Us Help You
EnglishChoose a language for shopping. United StatesChoose a country/region for shopping.
© 1996-2022, Amazon.com, Inc. or its affiliates