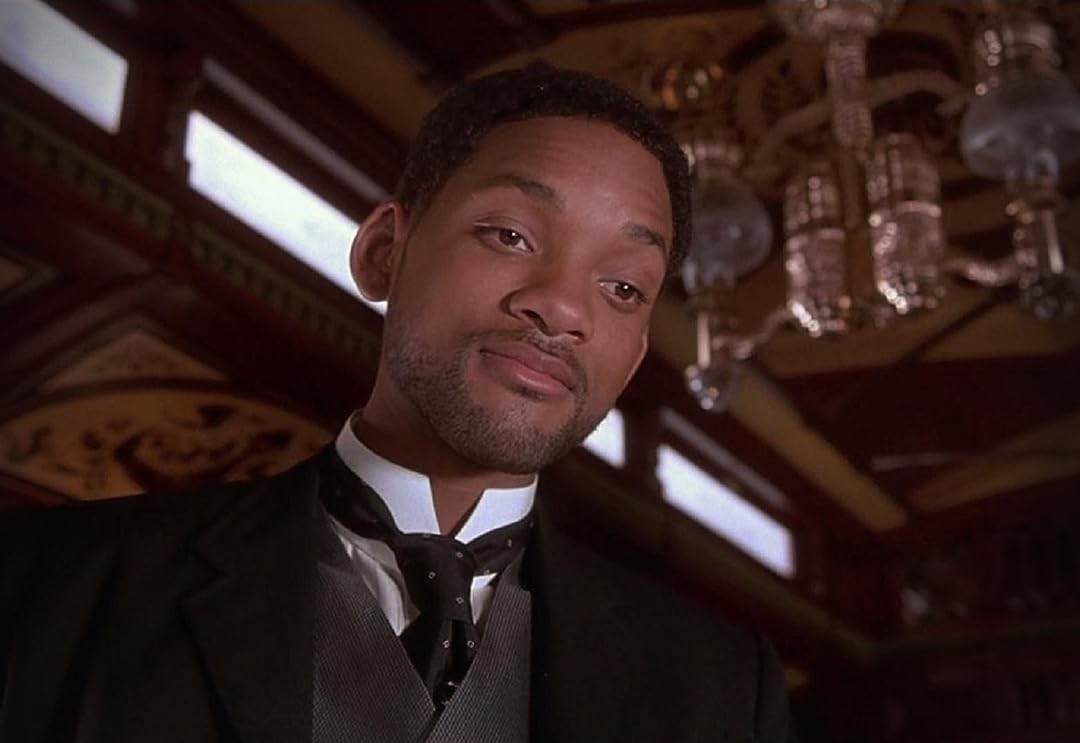 (2,997)4.91 h 45 min1999X-RayPG-13
Will Smith, Kevin Kline and Salma Hayek is on a perilous assignment: stop Dr. Arliss Loveless and his contraption-driven plot to establish a Disunited States of America.

jude pepperReviewed in the United States on November 10, 2019
4.0 out of 5 stars
Movies Vs. Juggernauts: The Eternal (and often hopeless) Struggle!
Verified purchase
i've had fun here, expressing my inner Leonard Maltin, but i have no delusions about my ability to make it as a professional critic. try as they might, they would never manage to teach me what is clearly the profession's Golden Rule, namely...
"comedies and fantasy adventures, technically known as "fun" or "necessary" movies, are absolutely beneath contempt. every month or so one such title will be drawn from a hat, and that one you may praise if so moved. all others are to be regarded and treated as deliberate, malicious attacks upon you personally.
"whereas dramas about day-to-day life in The Real World, technically known as "boring" or "pointless" movies, are the sacredest of cows and therefore to be graded on the proverbial curve. we're not saying you have to rave about every single one, but even the worst is to receive only the mildest slap on the wrist."
of course i'm paraphrasing. (yes, i realize i'm also generalizing, if not stereotyping, i just don't care.) but there surely must be some official creed to that effect. how else is one to account for the fact that something as vapid and inane as My Dinner With Andre, not to mention a soulless fad exploitation gambit like Saturday Night Fever, gets hailed as some sort of masterpiece, yet Wild Wild West, a delightful romp in the best tradition of the "popcorn" movie, becomes such an out-of-proportion whipping-boy.
honestly, to this day the film is held up a poster-child of grossly incompetent filmmaking and/or why vintage tv shows should never be adapted to modern movies. someone even managed to browbeat Will Smith into apologizing to Robert Conrad for "bastardizing" his signature role. to say nothing of the geek snobs who still won't let Smith forget that he passed on The Martix to do this film. (apparently it's a moot point that The Matrix is a convoluted wad of metaphysical gibberish, whereas whatever else you wanna say about Wild Wild West, at least it makes sense.)
the film is occasionally even called racist for some reason. presumably it has something to do with casting the black Will Smith as the formerly white Jim West. (it was around this time that modern political correctness began to get out of hand.) although i don't really understand that either, because turning a white character black seems like more of a slap in the face to the Ku Klux Klan than the NAACP. what race-relations commentary there is is in the tradition Blazing Saddles.
in practice, the film is too fun, too good-spirited, to actually deserve to be such a pariah. one can only assume that it got the leper status by way of eenie-meenie-miney-moe. either way, it was pretty much a fait accompli once the juggernaut got rollin'.
director Barry Sonnefeld chose Smith, star of his recent triumph Men In Black, simply to approach from a new angle. certainly his "aw, hell naw" shtick is a bit anachronistic, but hey, the original series wasn't exactly the stuff of The History Channel, either. it was James Bond in the West, for cryin' out loud. (although it might be a closer fit to "spy-fi" a' la The Avengers.) (Patrick Macnee, not Robert Downey.) Robert Conrad or Will Smith, it's escapist fantasy and should be treated as such.
it certainly never lacked a sense of the absurd. take it's most memorable villain, Dr. Miguelito Loveless. he was played by a dwarf actor named Michael Dunn, and "Miguelito" literally translates as "Little Michael." you can hardly accuse the film of straying from the original spirit if you knew that.
so it's not Gunsmoke. and since i never cared for Gunsmoke, i consider that a compliment.
a pretty good cast doesn't hurt, either. Kevin Kline is a hoot as "techie" sidekick/master of disguise Artemus Gordon. you wouldn't expect him to have any chemistry with Smith, but somehow they mesh gracefully. they say any film is only as good as it's villain, and this film certain scored when they cast Kenneth Branagh as Dr. Arliss Loveless. (no longer Miguelito for obvious reasons. who knows, maybe "Arliss" translates to "Little Kenneth" in some language.) he's crippled rather than munchkin, and as a chauvinist Southerner, his scheme is to secede from the United States. but he certainly has a kinship with the Miguelito of old, right down to his preference of henchwomen to henchmen. neither Kline nor Branagh does this sort of thing very often, and both are clearly having a ball with the change of pace.
i've long had a theory that genuine cinematic catastrophes are in fact as rare as masterpieces, that as a rule of thumb, a given film is less likely to be terrible than simply unexceptional. if nothing else, this movie should demonstrate that much.
one thing's for sure: Wild Wild West is hands-down the greatest film ever to "win" a Razzie!
i have to say, this attitude toward "bad" movies often perplexes me and sometimes even scares me a little. i mean sure, we all know what it's like to look forward to a movie, only for it to let us down, often having paid for the "privilege," but why do some take it so personally? what damage does it do, really?
logically, a world which remembers the names Adolf Hitler, Al Capone, and Charles Manson should be able to keep a comparatively minor sin like Ishtar or Battlefield Earth in perspective. there's a difference between a tragedy and a mere bummer, isn't there?
i'm just sayin.

KanadaXReviewed in the United States on July 30, 2017
4.0 out of 5 stars
Funnier now than back in the 90s
Verified purchase
I loved the TV series as a kid and couldn't wait to see this version in the movie theaters. While it was a fairly far deviation from the TV series, i enjoyed it. I guess I can understand why it was critically panned but maybe the expectation just needed to be adjusted. I mean, movies like this are supposed to be an escape from reality and i remember thinking the TV show always seemed a little far -fetched given its supposed time frame (e.g. Arty's inventions) so I was ok with this movie taking on the same tone with the ridiculousness of the "mechanical" creations.
Another place I think the movie was criticized for was the confusion as to whether it was supposed to be a comedy or not. I did just re -watch it and I think some of the humor, especially the racist/ sexist references, is similar to stuff you would see in spoofs today like Key&Peele or even SNL sketches - irreverent and ironic, but maybe want as acceptable as in the 90's. I found myself LOL at the leggless jokes and the scene where Will Smith is trying to talk his way out of being lynched. Watching the movie today(2017), I thought i could see this becoming a "cult classic" because of that type of irreverant humor, the use of 007-like gadgetry(anachronistic as they were), and the over the top acting. Overall, it's worth watching to escape reality for a while.
10 people found this helpful

JeanReviewed in the United States on December 20, 2018
4.0 out of 5 stars
This film got a bad rap (no pun intended)
Verified purchase
Since Will Smith began as a "rapper." Smith is a talented comedic actor, and so is Klein. The material here leaves a bit to be desired, but the two leads elevate it as much as artistically possible. When this came out many people ignored it due to the horrible reviews (including myself), but that was a mistake.

This is a LOL film in several places - with lots of CGI gadgets to keep the viewers attention. All of the lead actors do an excellent job selling the story. Now that this is on Prime - I highly recommend giving it a try. It was entertaining, with many lol moments.
2 people found this helpful

Rick JamesReviewed in the United States on December 25, 2018
3.0 out of 5 stars
Why the hate?
Verified purchase
It's a light movie. Kind of your basic "buddy" movie formula. The special effects, stunts, costumes and acting are all done perfectly well. The script is a tad weak but it's not exactly intended to be a serious or thought provoking movie. I'm not at all familiar with the source material. I had no expectations before watching it other than to pass a couple hours relaxing and my expectations in that regard were met. There's so many far worse movies I don't know why this one got such negativity other than it perhaps deviated too far from the source material and came off as cheesy. Eh, whatever. I consider movies on what they are, not what I think or want them to be. Have a nice day! Ciao.
2 people found this helpful

JessReviewed in the United States on May 29, 2020
5.0 out of 5 stars
Funny, Hilarious, Oddly and Beautifully Strange
Verified purchase
Is this a "piece of art", an avant-garde masterpiece of the ages?

No, it's a silly, steampunk, Western.

However, having taken a film class, been an academic at a university wih an incredible film school (LMU), I haven't wavered in my value in the feelings movies breed, versus their poetic caliber, and license to make you a snob.

This movie is fun to watch. It's excellent. And Loveless is totally creepy, but can't take my eyes off him, his beard, and his evil scheming.

sefriendlyguyReviewed in the United States on October 30, 2017
5.0 out of 5 stars
A LOOK AT THE PAST AND FUTURE OF THE OLD WEST!
Verified purchase
this movie was set back in 1869 in the old west, kevin cline,will smith and salma hayek, al 3 end up working together to
take care of president grant and there is a guy thats only half of himself and in a self made mechanical wheel chair
thats trying to get to the president and take and divide the united states with his giant mechanical motorized spider
Jim west and arte have a hard time with this guy and selma hayek, will she is basically a distraction as Jim west puts it
its hard fought battle and you will see some made up creations by arte( kevin Kline) they are well thought out
but not always the best of ideas, this movie is funny and you will get lots of laughs out of it!
so sit back and enjoy THE WILD,WILD WEST!!!
One person found this helpful

WNY DadReviewed in the United States on December 26, 2018
1.0 out of 5 stars
Not funny, not worth watching
Verified purchase
This may have been funny back in the day, but is lame by today's standards.

It is slow, dull, un-funny, and too unrealistic to be entertaining. The characters are over-the-top ridiculous and the plot is so thin. I want my two hours back!!!
2 people found this helpful

CraigerReviewed in the United States on July 11, 2017
1.0 out of 5 stars
Awful.
Verified purchase
I can't believe I finished it. Awful movie. I understand what they were going for but it's just so stupid. I love a good comedy and a good western. This load of crap was neither.
9 people found this helpful
See all reviews
Back to top
Get to Know Us
Make Money with Us
Amazon Payment Products
Let Us Help You
EnglishChoose a language for shopping. United StatesChoose a country/region for shopping.
© 1996-2021, Amazon.com, Inc. or its affiliates