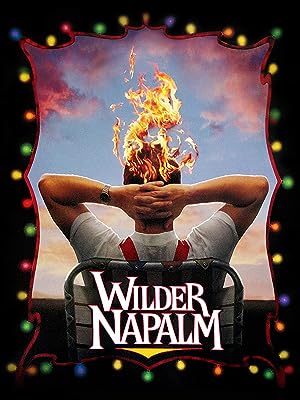 (78)
5.61 h 49 min1993PG-13
Two brothers, Wilder and Wallace Foudroyant (Arliss Howard and Dennis Quaid) have a lot in common. First, they can make flames roar into life just by thinking about them. And, second, they are in love with the same woman...Wilder's wife, Vida (Debra Winger).

Jamie A.Reviewed in the United States on July 5, 2020
4.0 out of 5 stars
Highly underrated
Verified purchase
I've been looking for this on DVD for some time now. I saw it years ago and loved it's quirkiness and unique storyline. I only recently learned it was written by THE Vince Gilligan (bow to the master). This fact makes me love it even more. There really is a hole in Hollywood cinema where originality used to reside. So many remakes, reboots, sequels, and prequels but nothing that makes an indelible impression. Thank you for this underrated gem of a flick.
4 people found this helpful

my morning reviewReviewed in the United States on February 4, 2017
5.0 out of 5 stars
Arliss Howard and Debra Winger are very Sexy sweet together.
Verified purchase
this is a funny movie, the subject matter unique, and all the actors seem to be having a great time. the chemistry between Arliss Howard and the wonderful Debra Winger, whose grin is just infectious, was real - they are married. i dont know if they were when they did this. I'm not a big fan of Dennis Quaid but he was good in this. His .. suspicious and self important air works very well with this character.

two boys have extraodinary abilities with fire.
the added stuff with the singing fireman is abit much but still it lends a certain friday night at the movies air, this would be a good movie if you had to hold up in your room for a while and watch .. movies that turn out happy in the end.

Mark T WitmerReviewed in the United States on September 6, 2021
1.0 out of 5 stars
Weak plot, very little substance. Attempts to be Avant-garde but fails. Creepy instead
Verified purchase
If there is nothing else to watch, perhaps this could pass the time, but don't expect a strong delivery or any meaningful plot development.

Perhaps this was a poorly developed book adaptation?? If so, that could explain how this excuse for a movie was ever considered.

Robert SadinReviewed in the United States on September 15, 2020
5.0 out of 5 stars
Cute, Cheesy, and Great Balls of Fire
Verified purchase
One of the stranger movies I've watched. Didn't know the fantastic Debra Winger was in the movie. She and all the other actors were really fun to watch as they hammed it up in this brother jealousy dramady. The action scenes were terrific too. Well done costumes and explosions, interspersed with schizophrenic dialogue, sight and sound gags, and monster fireballs. What was not to like?

Craig GoodReviewed in the United States on April 15, 2018
5.0 out of 5 stars
My favorite romcom
Verified purchase
Ever wonder what a romcom would be like if it were written by the creator of Breaking Bad? Wonder no more. This little gem has been a favorite of mine for years. Inventive visual storytelling, and characters you haven't seen before.

And did I mention singing firemen?
3 people found this helpful

D. JesterReviewed in the United States on February 2, 2011
4.0 out of 5 stars
Really amusing!
Verified purchase
With this film, first you have to get over the fact that one aspect of it is unrealistic. I won't go into what that is, as I don't wish to ruin the movie for you. If you are a big Debra Winger fan, this is a "buy" right off the bat, no need to read any more. Two brothers, one of them her husband, are fighting over her in a most extreme fashion. I promise you have never seen a fight like it. Jim Varney (Ernest Goes To Camp) and M. Emmett Walsh have great cameos in this film, as does a singing fire brigade. While this will never be on the AFI top 100 list, if you like an offbeat comedy, you will probably like this, and you will likely want to watch it again now and then. As I stated in the first line, though, if you are a person who insists on every minute of a film being completely credible scientifically, then you may want to bypass it, as a bit of a leap of faith is required regarding one point.
One person found this helpful

LucyReviewed in the United States on August 14, 2020
5.0 out of 5 stars
90's charm, funny, underrated, highly recommend.
Verified purchase
Very well written, funny, with that 90's charm.
I agree with other reviewers that this movie is very underrated and a really fun watch.
Highly recommend.

Raven_rose1221Reviewed in the United States on June 21, 2021
5.0 out of 5 stars
awsome!
Verified purchase
been looking for this movie for such a long time! i used to watch it when it came on tv back in the 90's ,so to now be able to watch it whenever i want it is amazing!!!
See all reviews
Back to top
Get to Know Us
Make Money with Us
Amazon Payment Products
Let Us Help You
EnglishChoose a language for shopping. United StatesChoose a country/region for shopping.
© 1996-2022, Amazon.com, Inc. or its affiliates