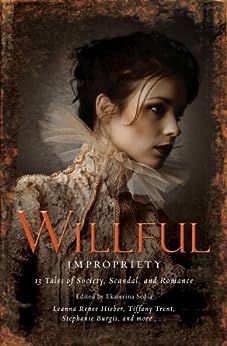 by Ekaterina Sedia (Author) Format: Kindle Edition
See all formats and editions
Sorry, there was a problem loading this page. Try again.

The Victorian era is significant for the rise of the middle classes and marked changes in social relationships, both in the home and in wider society, with the proliferation of domestic help and the development of increasingly rigid gender roles.

These are romances that chafe against the restrictions of the period, with heroes and heroines who defy social convention, igniting firestorms of gossip. The aristocrats, impostors, social climbers, domestic workers and undercover agents of these stories exist in an authentically lush world, depicted here with telling attention to detail.

While most of the stories are strongly realistic, some incorporate elements of fantasy.

adrianne
5.0 out of 5 stars Wonderful!
Reviewed in the United States 🇺🇸 on January 29, 2017
Verified Purchase
I bought this book for the stories by Burgis, Kowal, Brennan, and Stervermer. All of them were utterly fabulous, along with several of the stories written by less familiar authors.
Read more
Helpful
Report abuse
See all reviews
Report an issue
Does this item contain inappropriate content?
Report
Do you believe that this item violates a copyright?
Report
Does this item contain quality or formatting issues?
Report