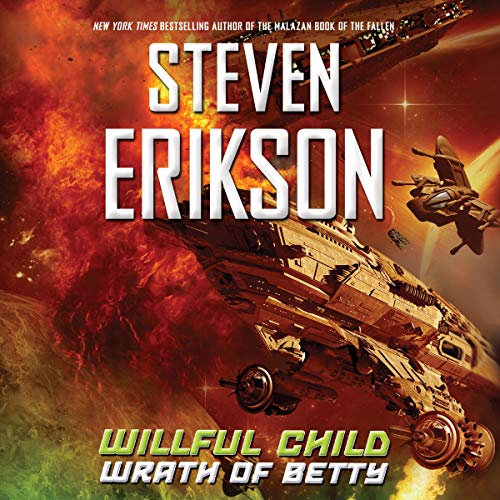 The continuing adventures of the starship A.S.F. Willful Child. Its ongoing mission: to seek out strange new worlds on which to plant the Terran flag, to subjugate and if necessary obliterate new life-forms, to boldly blow the...

And so we join the not-terribly-bright but exceedingly cock-sure Captain Hadrian Sawback and his motley crew on board the Starship Willful Child for a series of devil-may-care, near-calamitous and downright chaotic adventures through "the infinite vastness of interstellar space."

The New York Times bestselling author of the acclaimed Malazan Book of the Fallen series has taken his lifelong passion for Star Trek and transformed it into a smart, inventive, and hugely entertaining spoof on the whole mankind-exploring-space-for-the-good-of-all-species-but-trashing-stuff-with-a-lot-of-high-tech-gadgets-along-the-way, overblown adventure. The result is an SF novel that deftly parodies the genre while also paying fond homage to it.

Special invitation from Audible!
Learn more about Membership
List Price: $20.99
You Save: $3.00 (14%)
By completing your purchase, you agree to Audible’s Conditions Of Use
Sold and delivered by Audible, an Amazon company
Share

4.3 out of 5 stars
4.3 out of 5
57 global ratings
How are ratings calculated?
To calculate the overall star rating and percentage breakdown by star, we don’t use a simple average. Instead, our system considers things like how recent a review is and if the reviewer bought the item on Amazon. It also analyzes reviews to verify trustworthiness.
Top reviews

Patrick St-Denis, editor of Pat's Fantasy Hotlist
4.0 out of 5 stars Good sequel
Reviewed in the United States on February 18, 2017
I was extremely curious about Willful Child when it was announced that Steven Erikson would be publishing a Star Trek spoof. God knows I've never been a Star Trek fan myself, but I was looking forward to reading Erikson's homage/parody. Considering how fun and humorous the Bauchelain and Korbal Broach novellas have always been, such a spoof promised to be hilarious. And Willful Child was just that!

So when I received a galley of the sequel, you can be sure that it went to the top of the pile! This being the second volume and reviewers should now know better, one can only hope that we won't be seeing negative and luke-warm reviews from readers expecting a blistering and fascinating foray into science fiction by the author. How could anyone have had such expectations after reading the cover blurb for the first installment, I'll never know. This book/series was always meant to be a parody. Anyone expecting something dense and thought-provoking, or the Bridgeburners in space, was smoking some pretty potent stuff. To those who thoroughly enjoyed Willful Child, I can tell you that this sequel is just as fun and entertaining as its predecessor.

The continuing adventures of the starship A.S.F. Willful Child. Its ongoing mission: to seek out strange new worlds on which to plant the Terran flag, to subjugate and if necessary obliterate new life-forms, to boldly blow the...

And so we join the not-terribly-bright but exceedingly cock-sure Captain Hadrian Sawback and his motley crew on board the Starship Willful Child for a series of devil-may-care, near-calamitous and downright chaotic adventures through ‘the infinite vastness of interstellar space.'

The New York Times bestselling author of the acclaimed Malazan Book of the Fallen series has taken his lifelong passion for Star Trek and transformed it into a smart, inventive, and hugely entertaining spoof on the whole mankind-exploring-space-for-the-good-of-all-species-but-trashing-stuff-with-a-lot-of-high-tech-gadgets-along-the-way, overblown adventure. The result is an Science Fiction novel that deftly parodies the genre while also paying fond homage to it.

Steven Erikson has accustomed us to multilayered worldbuilding that resounds with depth, but once again this aspect takes a backseat in this new Star Trek spoof. As was the case in Willful Child, we get just enough to keep the story moving forward. This is a parody/comedy and nothing gets in the way of the rhythm so that the jokes and weird/funny situations keep on coming. And believe you me: They keep on coming! It appears that Erikson was gunning for at least a laugh/chuckle on every single page and it's pretty much what we get. Once more, Willful Child: Wrath of Betty isn't a work that takes itself too seriously and it's a joyride from start to finish!

Following the hilarious misadventures of Captain Hadrian Sawback continues to be a riot. Sexist, incompetent, rude, too full of himself, and downright dumb at times, it's nonetheless impossible not to root for the poor guy. In every way, the man remains an over-the-top parody of the memorable Captain Kirk. Old-fashioned sexism, racism, and xenophobia often characterize his character, making him a throwback male protagonist from the 60S or the 70s. The Affiliation and Fleet Command have had it with Sawback due to the events chronicled in the first book, and they send the charismatic Captain Hans Olo of the AFS Century Warbler and A.C.P. Security Field Agent Rand Humblenot to shadow the Willful Child and make sure that they can be there to take action whenever Captain Sawback screws up again. And to speed up the man's demise if the opportunity were to present itself. The rest of the supporting cast is comprised of incompetent crew members and a number of buxom female officers hand-picked by the captain for their looks and nothing else, as well as the recalcitrant chicken AI Tammy, and a few odd aliens along the way. Between Sawback and his incredibly inept crew, an AI from the future who wishes to see its captain fail miserably, Affiliation officers bent on orchestring Sawback's military and personal downfall, and friendly and not-so-friendly alien species populating known and unknown parts of interstellar space, how could things possibly go well for the Willful Child and its crew? Follow them on another unexpected and fun-filled journey across time, space and dimensions!

By removing much of the depth and the details that have come to define Erikson's fantasy works, like its predecessor Willful Child: Wrath of Betty is another fast-paced novel. There is never a dull moment within its pages. Too quickly do we reach the end of the book and here's to hoping that there will be yet another sequel down the line. Although I much prefer Steven Erikson's Malazan installments, occasional fun romps like these last two wacky science fiction parodies are like a breath of fresh air that show a totally different side of the author. Time will tell just how many of these fun and entertaining scifi comedies Erikson can get away with. But as things stand, I'm persuaded that fans will clamor for yet more adventures featuring the inimitable Captain Hadrian Sawback and his crew as the voyage of the Willful Child continues.

If you are looking for a light and hilarious science fiction spoof, then Willful Child: Wrath of Betty will definitely scratch that itch! This Star Trek parody/homage, with a number of Star Wars references thrown in for good measure, continues to work incredibly well. I for one am looking forward to whatever comes next!
Read more
2 people found this helpful
Helpful
Report abuse

House of Shannon
5.0 out of 5 stars Well written and very entertaining
Reviewed in the United States on January 14, 2020
Verified Purchase
The book is such a spoof on my favorite Star Trek and I should be offended, but, I'm loving the imagination and writing.
After all, a good book should entertain and hopefully educate along the way. So far, I've really enjoyed this series.
This is the 2nd book in the series and I'm 1/4 through this one at the time of writing this review.
Read more
Helpful
Report abuse

R. Short
5.0 out of 5 stars When did Stephen Erickson get so funny?
Reviewed in the United States on January 31, 2017
Verified Purchase
If you've never read the Books of Malazon you will enjoy this book and it's predecessor, funny but serious science at the same time. If you have journeyed in Malazan, you will be astounded and entertained by these books. Brilliant diversion Mr Erickson
Read more
One person found this helpful
Helpful
Report abuse

Gesler
5.0 out of 5 stars Good read, funny with some sarcastic comments on current issues
Reviewed in the United States on January 28, 2017
Verified Purchase
Enjoyed it, looking forward to the next book. This is better than the first willful child book. The main character felt familiar and after a while, realized it was just tehol in outer space.
Read more
3 people found this helpful
Helpful
Report abuse

Matthew
4.0 out of 5 stars Zapp and GladOS are Back! I Mean Hadrian and Tammy!
Reviewed in the United States on November 8, 2016
They're back! I'm so glad this got a sequel. I honestly don't understand why people don't love this book and its prequel.

This second book more than the previous one is set up in an episode format (TV series pretty please?) where for a chapter or two there is a contained plot that flows into the next episode. It's pretty nice since it means nothing ever stays and goes on too long, as books like this are prone to do.

So I still highly recommend this series to anyone who wants a book that is a hybrid of (deep breath) Star Trek, Star Trek Next Generation, Futurama, Archer, Portal, John Scalzi, Douglas Adams, Star Wars, and many more.
Read more
3 people found this helpful
Helpful
Report abuse
See all reviews

Wrights
5.0 out of 5 stars Too Short
Reviewed in Canada on November 16, 2016
Verified Purchase
A lot of fun to read, a good satire of human nature, but these are too short. They are too entertaining and I end up reading them too fast.
Read more
Report abuse

vfs_man
4.0 out of 5 stars Excellent
Reviewed in Canada on November 28, 2016
Verified Purchase
Wonderful and amusing, an entertaining and easily digestible read for the commute to and from work. Four more words, lol.
Read more
Report abuse

patrick starnes
5.0 out of 5 stars Five Stars
Reviewed in Canada on January 13, 2017
Verified Purchase
Funnier than the first one a great homage to Star Trek.
Read more
Report abuse
See all reviews
Back to top
Get to Know Us
Make Money with Us
Amazon Payment Products
Let Us Help You
EnglishChoose a language for shopping. United StatesChoose a country/region for shopping.
© 1996-2022, Amazon.com, Inc. or its affiliates