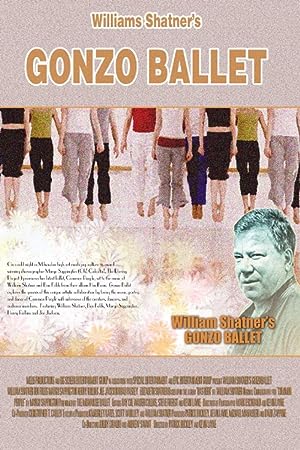 (7)7.751min20117+
On a cold night in Milwaukee high art meets pop culture as award winning choreographer Margo Sappington premieres her latest ballet, "Common People", set to the music of William Shatner and Ben Folds from their album, Has Been. In HD.

silent0042Reviewed in the United States on November 1, 2012
4.0 out of 5 stars
Interesting Dance-Documentary
Verified purchase
First and foremost, this is not just a ballet. Yes, there is ballet. However, it is more of a documentary on William Shatner's album "Has Been" with some random tracks being performed by a ballet company. There are interviews with Shatner, his wife, Ben Folds, Henry Rollins, the choreographer, and the dancers throughout this piece. That makes this video much more reaching than just a ballet performed to some spoken-word pieces of Shatner. With that being said, if you want to watch dance, watch something else. Not saying that the dance in this is bad (because it certainly isn't) but this isn't about the ballet. It's about William Shatner and the ballet is second. There are some effects that are reminiscent of a trip down acid lane, so be warned that they really detract from the dance. However, if you are a Shatner fan, well, it's only an hour long. Give it a shot.
3 people found this helpful
Report abuse

Mitch BolexReviewed in the United States on December 6, 2018
5.0 out of 5 stars
Fantastic film
Verified purchase
Shatner is unusually unguarded, especially in the second half of the film.
Report abuse

DcLonChiReviewed in the United States on September 24, 2013
4.0 out of 5 stars
Surprisingly un-cheesy
I've seem the show (and the films), youtubed the comic impersonations, read the biography, seen a half dozen of various Trek/ Shatner documentaries. I've got his version of Lucy in the Sky (and Common People) on my iPod. I'm not extreme, but i guess I'm a fan.

Ditto for ballet -- I'm a fan, and I've seen enough to know what I like and (I think) have a reasonably informed opinion, for a non-dancer. Ive never seen Sappingtons work before, but i like modern ballet and she intrigues me. I think ballet struggles to be cool, and sometimes the whole "rock/sex it up to get young folks (ie, under 60s) in the doors" vibe can cross the line into desperately awkward. But this project seems to be on the genuine side of that line, so kudos there. I would have liked to hear a question on the (theoretical) commercial appeal, but this takes a pretty softball approach to the participants.

I was somewhat surprised to see a lot of Ben Folds and Henry Rollins in this, and obviously the album predates the show by a few years, but I guess they had the cameras rolling then, so why not use the footage? I've never been big fans of either, but I do like indie rockumentaries, so that offered another angle. Both musicians come off as solid craftsmen as well as artists. That may sound like faint praise, but f you've seen Some Kind of Monster, Wilco/Break Your Heart, Anvil or any of the other dysfunctional band docs, you'll know that I mean it as a real compliment.

Back to Shatner -- who is very much the star of this show: I've never quite been sure whether the guy is talented or lucky. I'd say that this film, more than any other, gives you an insight into that question. He defends his original music career (fairly convincingly, it must be said, though it doesn't really touch on the rock-it-man goofiness). He really talks up Has Been as a work of art, not a money grab, and I buy it. He has a lot of interesting things to say about a lot of topics, though, it must be said, i still wonder if he's the kind of guy who googles before he's on camera.

As a documentary, I think this offers great insight into how art is made (both the album and the ballet). I think both are worthy topics, and you get to see a large chunk (all?) of Sappington's work. Both are far more than kitsch (though I do wonder about the costume designer). I think the choreographing and staging of the ballet actually could have used a bit more depth, because it's interesting to see a ballet doc that's not over the top on the beauty and/or the suffering.

Anyway, if you tick 2 of the boxes: Shatner-phile, balletophile, indie-rock documentary watcher, I'd give it a pretty solid thumbs up for a "rental". I may be an audience of one, but I'm actually interested in Shatner, indie rock, and ballet, so this was a perfect little "rental".

Johnnie E McBrideReviewed in the United States on December 30, 2014
4.0 out of 5 stars
Definition worth watching.
It's actually a documentary about how a ballet was created using William Shatner's latest album. It is great because it includes the full song "Common People" and the best collaberations written and performed by Shatner and Ben Folds. You also get interviews with Shatner and the choreographer that wanted to create the ballet. There are both practice and full performance versions of the songs but not the full performance of the enrire ballet. From what is shown here, it looks like the whole piece would be a great event. I don't know if there is a video of the full ballet but it would be worth buying if this video is any indication. Shatner seemed genuinely surprised to be approached with the idea of the ballet from the choreographer, a fan that is well known in her own field. It is one of the best documentaries I've seen.
5 people found this helpful
Report abuse

Jessica L. EdwardsReviewed in the United States on November 28, 2014
5.0 out of 5 stars
Feelings put perfectly+music+dance=a life defined
I just watched it on TV and fell in love with it. I will be watching to see when this is available on DVD and buy a copy. The spoken words and music behind the ballet were the perfect medium. I want a copy to read and enjoy.
2 people found this helpful
Report abuse

Mrs. GrantReviewed in the United States on February 15, 2017
5.0 out of 5 stars
Have to find it
I watched it many times on Netflix. Now I'm looking for my own copy to watch it some more. I want it!!
One person found this helpful
Report abuse

Colleen M. BarkerReviewed in the United States on October 24, 2014
5.0 out of 5 stars
Thumbs up!
I am a season ticket subscriber of the Milwaukee Ballet and was present for this performance...Margo has rivaled her genius of 'Virgin Forest' with this performance...and Shatner's rendition of 'Common People' is brilliant and innovative...DEFINITE THUMBS UP!
2 people found this helpful
Report abuse
See all reviews
Back to top
Get to Know Us
Make Money with Us
Amazon Payment Products
Let Us Help You
EnglishChoose a language for shopping. United StatesChoose a country/region for shopping.
© 1996-2021, Amazon.com, Inc. or its affiliates