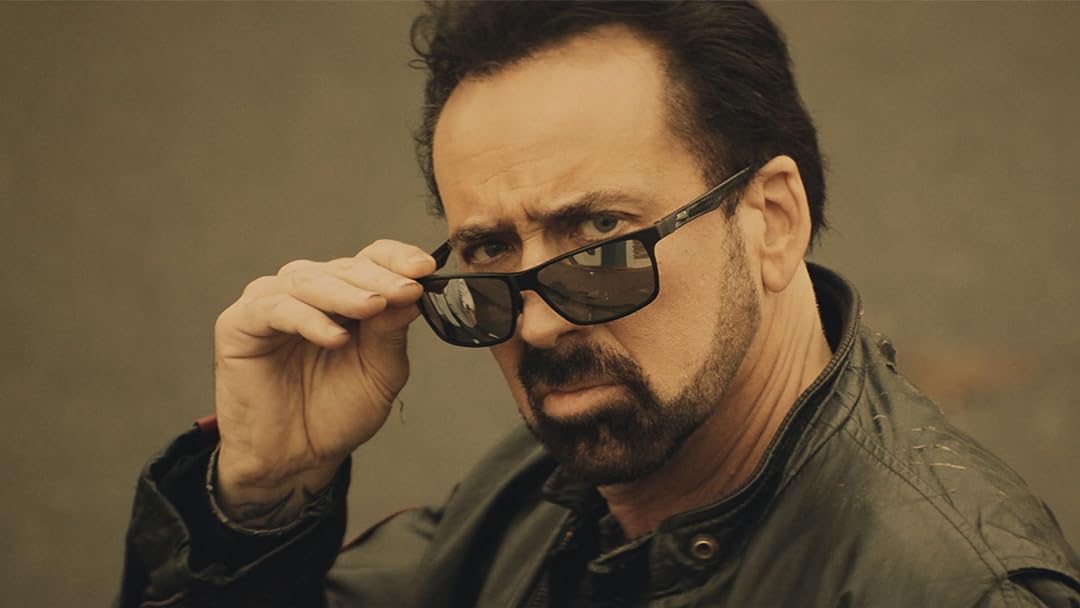 Doug WelyczkoReviewed in the United States on February 12, 2021
5.0 out of 5 stars
An absolute blast
Verified purchase
This movie is a cheese monster, soaked in cheese, carrying an enormous wheel of neon cheese that says "CHEESE" on it. If you come in here expecting some dramatic masterwork character study that gets lauded in a French art class, you're an idiot. If you come in here expecting to turn off your brain and watch Nic Cage go HAM on murderous animatronics while wondering what Ian Malcolm from Jurassic Park would have to say about the whole situation, you're going to have a great time.

The movie wastes 0 time in getting to the point, which is watching Cage murder the murderbots. Some of the camera work is a bit questionable at times and the editing can be a bit choppy, but I promise if you accept the movie for what it is, you will absolutely be entertained.

rupinder singhReviewed in the United States on February 14, 2021
5.0 out of 5 stars
Daddy Nick's ultimate masterpiece
Verified purchase
Phone Guy - "Hello, hello? Uh, I wanted to record a message for you to help you get settled in on your first night. Um, I actually worked in that office before you. I'm finishing up my last week now, as a matter of fact. So, I know it can be a bit overwhelming, but I'm here to tell you there's nothing to worry about. Uh, you'll do fine. So, let's just focus on getting you through your first week. Okay?
Uh, let's see, first there's an introductory greeting from the company that I'm supposed to read. Uh, it's kind of a legal thing, you know. Um, "Welcome to Freddy Fazbear's Pizza. A magical place for kids and grown-ups alike, where fantasy and fun come to life. Fazbear Entertainment is not responsible for damage to property or person. Upon discovering that damage or death has occurred, a missing person report will be filed within 90 days, or as soon property and premises have been thoroughly cleaned and bleached, and the carpets have been replaced."

Blah blah blah, now that might sound bad, I know, but there's really nothing to worry about. Uh, the animatronic characters here do get a bit quirky at night, but do I blame them? No. If I were forced to sing those same stupid songs for twenty years and I never got a bath? I'd probably be a bit irritable at night too. So, remember, these characters hold a special place in the hearts of children and we need to show them a little respect, right? Okay.

So, just be aware, the characters do tend to wander a bit. Uh, they're left in some kind of free roaming mode at night. Uh...Something about their servos locking up if they get turned off for too long. Uh, they used to be allowed to walk around during the day too. But then there was The Bite of '87. Yeah. I-It's amazing that the human body can live without the frontal lobe, you know?

Uh, now concerning your safety, the only real risk to you as a night watchman here, if any, is the fact that these characters, uh, if they happen to see you after hours probably won't recognize you as a person. They'll p-most likely see you as a metal endoskeleton without its costume on. Now since that's against the rules here at Freddy Fazbear's Pizza, they'll probably try to...forcefully stuff you inside a Freddy Fazbear suit. Um, now, that wouldn't be so bad if the suits themselves weren't filled with crossbeams, wires, and animatronic devices, especially around the facial area. So, you could imagine how having your head forcefully pressed inside one of those could cause a bit of discomfort...and death. Uh, the only parts of you that would likely see the light of day again would be your eyeballs and teeth when they pop out the front of the mask, heh.

Y-Yeah, they don't tell you these things when you sign up. But hey, first day should be a breeze. I'll chat with you tomorrow. Uh, check those cameras, and remember to close the doors only if absolutely necessary. Gotta conserve power. Alright, good night."

Phone Guy - "Uhh, Hello? Hello? Uh, well, if you're hearing this and you made it to day two, uh, congrats! I-I won't talk quite as long this time since Freddy and his friends tend to become more active as the week progresses. Uhh, it might be a good idea to peek at those cameras while I talk just to make sure everyone's in their proper place. You know...
Uh... Interestingly enough, Freddy himself doesn't come off stage very often. I heard he becomes a lot more active in the dark though, so, hey, I guess that's one more reason not to run out of power, right? I-I also want to emphasize the importance of using your door lights. There are blind spots in your camera views, and those blind spots happen to be right outside of your doors. So if-if you can’t find something, or someone, on your cameras, be sure to check the door lights. Uh, you might only have a few seconds to react... Uh, not that you would be in any danger, of course. I'm not implying that. Also, check on the curtain in Pirate Cove from time to time. The character in there seems unique in that he becomes more active if the cameras remain off for long periods of time. I guess he doesn't like being watched. I don't know. Anyway, I'm sure you have everything under control! Uh, talk to you soon."

Phone Guy - "Hello, hello? Hey you're doing great! Most people don’t last this long. I mean, you know, they usually move on to other things by now. I'm not implying that they died. Th-th-that’s not what I meant. Uh, anyway I better not take up too much of your time. Things start getting real tonight.
Uh... Hey, listen, I had an idea: if you happen to get caught and want to avoid getting stuffed into a Freddy suit, uhh, try playing dead! You know, go limp. Then there's a chance that, uh, maybe they’ll think that you're an empty costume instead. Then again if they think you're an empty costume, they might try to... stuff a metal skeleton into you. I wonder how that would work. Yeah, never mind, scratch that. It's best just not to get caught.

Phone Guy - Hello, hello? Hey! Hey, wow, day 4. I knew you could do it.
Uh, hey, listen, I may not be around to send you a message tomorrow. *banging* It's-It's been a bad night here for me. Um, I-I'm kinda glad that I recorded my messages for you *clears throat* uh, when I did.

Uh, hey, do me a favor. *banging* Maybe sometime, uh, you could check inside those suits in the back room? *banging* I'm gonna to try to hold out until someone checks. Maybe it won’t be so bad. *bang bang* Uh, I-I-I-I always wondered what was in all those empty heads back there. *chime plays*.

You know...*deep moan* oh, no - *noises followed by a loud screech and static*
110 people found this helpful

Bryan S.Reviewed in the United States on February 14, 2021
5.0 out of 5 stars
MY BALLITOS
Verified purchase
When Harambe got curb-stomped on the urinal, it spoke to me.
101 people found this helpful

BunniReviewed in the United States on February 12, 2021
5.0 out of 5 stars
nickolas cage can step on me
Verified purchase
very good movie 10/10 watch with friends
102 people found this helpful

John SmithReviewed in the United States on February 12, 2021
5.0 out of 5 stars
5 Nights At Cage's
Verified purchase
5 Nights at Cage's.....errr Willy's Wonderland was good for what it is....if you're going into this expecting a film the likes of The Exorcist or The Shining, of course you're going to be disappointed. This film is more of a neo b-rated, neo grindhouse styled action horror film with a small twist of comedy (most emphasis on the action element).
68 people found this helpful

fractaldreamingReviewed in the United States on February 12, 2021
4.0 out of 5 stars
Pop the Popcorn
Verified purchase
This movie understands what it is and solidly delivers: a cheesy (yet well-made and acted) b-horror movie starring Nic Cage who drinks lots of soda, fights demonic animatronics and has nothing to say because he's too busy playing pinball. What more do you need?! It's quick, virtually brainless and lots of bloody fun.
54 people found this helpful

Amazon CustomerReviewed in the United States on February 12, 2021
4.0 out of 5 stars
Worth a watch
Verified purchase
Its pretty good. Doesn't do everything it could have with its set up, but for the most part delivers on what the trailer promised. Cage is good at being a robot murdering weirdo, and the special effects team did well with the creatures. There is enough enjoyment here to get your money's worth. The things that hold it back from greatness are the way some of the fights are edited, and most of the cannon fodder characters were obnoxious. I initially found it frustrating that they don't explain much about cage's character, but having spent a number of years as a janitor, I get him. Energy drinks and hatred are what get you through the day. This is a movie for the workin' man.
50 people found this helpful
See all reviews
Back to top
Get to Know Us
Make Money with Us
Amazon Payment Products
Let Us Help You
EnglishChoose a language for shopping. United StatesChoose a country/region for shopping.
© 1996-2022, Amazon.com, Inc. or its affiliates