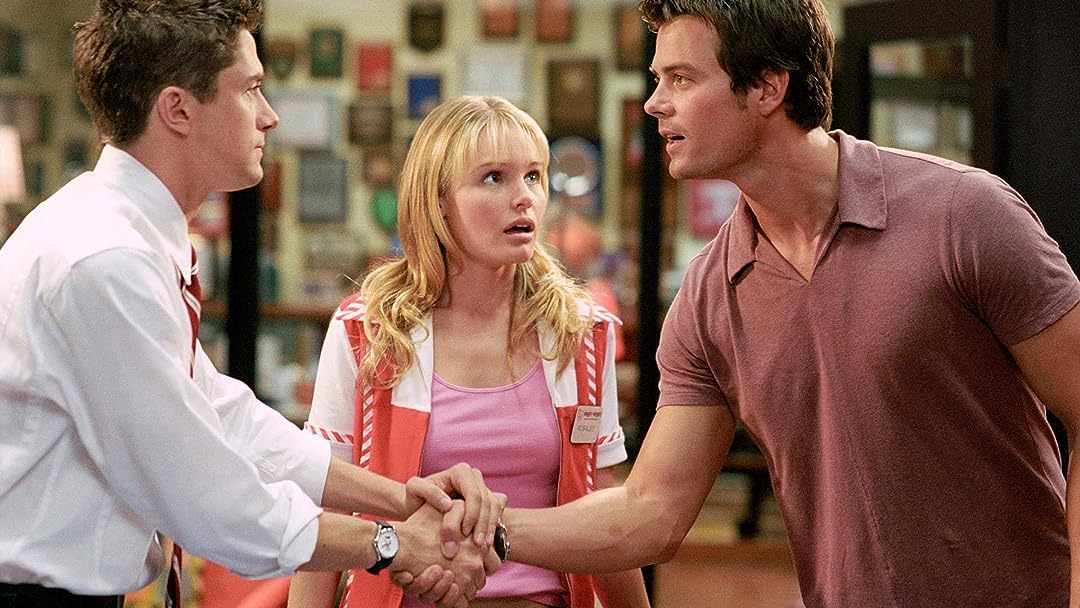 Win a Date with Tad Hamilton!

Jill KellerReviewed in the United States on August 12, 2020
2.0 out of 5 stars
Poor writing all around
Verified purchase
Topher Grace's character came off as overbearing and gross to me. Rosalee got a chance at something major - so after 22 years of doing nothing, that's when he needs to ruin her chances at anything else and try to make her love him. I felt bad for Rosalee - but her extreme cluelessness was just annoying. Small town doesn't equal brainless and clueless and unable to recognize what your best friend, who she knows better than anyone, is doing. At least enough to confront him and tell him to knock it off.
Tad Hamilton, meanwhile, was a pretty decent person who could recognize his flaws, confront them and be honest about them, and try to change - and he did change. He was the only one with ANY growth in this movie an dhe is the one that gets dumped. I knew she couldn't end up with him but he was the only one that was semi-interesting. Ending up with the guy that hounded her and tried to ruin her plans just put a sour taste in my mouth. Sure, he was in love with her, but besides sabotaging her, did we ever see why he was so amazing and wonderful for her outside of just being from the same town and knowing each other for 22 years? Where were his redeeming qualities, his goodness, the swoon-worthy scenes that show they're meant for each other? They weren't there, only an implied history that we see no evidence of. It's not enough for me.
15 people found this helpful

AJAthertonReviewed in the United States on August 29, 2020
1.0 out of 5 stars
Hot pile of garbage
Verified purchase
BOO. The actors acted great, but the plot is complete trash.
*spoiler alert*
Tad, while imperfect, after he meets Rosalee, is actually trying to become a decent guy and make some changes in his life to gain meaning and happiness. Her "friend," Pete, is a loser who selfishly tries to manipulate her, treats her like crap, for some reason thinks he OWNS her vag!na (Gaurd your carnal treasure?! Are you f!@#ing kidding me?!), and pouts like a petulant child the whole time about the fact that she's not in love with him, when he has NEVER once made any kind of a move, and frankly, is actually very snarky and demeaning towards her under the guise of humor. She never had a crush on him before, never loved him romantically before, but once Pete makes a desperate last ditch effort to 100% selfishly ruin her budding relationship, she's suddenly swooning into his arms? No. I'm not buying it, and neither should any young woman out there who has been guilt tripped over and over into thinking that they should owe a man ANYthing because he's "nice."

KittyReviewed in the United States on August 11, 2020
3.0 out of 5 stars
Am I really the only one?
Verified purchase
Warning: Spoilers. I scrolled through a few reviews and no one seems to have hated the ending as much as I did. While I get this is a cliche guy gets the girl in the end movie honestly I was just upset by the ending would've been better if she stayed with the celebrity guy.
6 people found this helpful

Dr KathyReviewed in the United States on July 14, 2020
4.0 out of 5 stars
A great romance movie showing that sometimes your soul mate is already in your life.
Verified purchase
A nice simple character study in romance and what happens if you fail to declare your feelings about someone. Especially if you have loved that person for a long time and have never told them how much you care about and maybe even love them. Then that person meets someone who sweeps them off their feet and now you realize that you might just lose a great love that has been so close, yet you never realized how deeply you loved this person until the chance that they may slip from your life happens. Moral of this story--if you care deeply about someone, tell them, don't keep it a secret, because many of us are not the most perceptive when it comes to true love and our deepest feelings. And probably the love you did not think was there will be reciprocated after your declaration of your feelings unlocks their awareness of their feelings towards you.
I gave it 4 stars because while it is very good and would give it 4.5 if it were possible. It is not the best one I have ever seen and I feel a rating of 5 or the topmost number should be reserved for those epic stories that come along once in a while.
2 people found this helpful

Rachel CarterReviewed in the United States on August 23, 2020
2.0 out of 5 stars
She picked the wrong guy!!
Verified purchase
I really liked the actors, they were super good and the flow was really nice. There were some funny and relatable parts too. However, after the best friend guy kept trying to ruin her chances with the celebrity who was actually a really nice person, after....so long of doing nothing while he was in love with her...yeah not impressed. Let me tell you if one of my best guy friends, who has been in love with me for years without telling me or acting on it or whatever. If he is going to ruin a date of mine out of jealousy with a celebrity who actually turned out to be really nice then he would not be a friend of mine anymore. Also best friend guy stalked her on the second date, tried to use his manager position to prevent her from going on the date and kept getting in her face saying actor guy was evil....so romantic. So I guess what I'm trying to say, the movie wasn't for me, just personal preference :)
5 people found this helpful

elizabeth nolanReviewed in the United States on November 4, 2016
5.0 out of 5 stars
contains spoilers
Verified purchase
I didn't like this movie all that much during my first viewing. I thought it was boring and unfunny. I saw it again, and I enjoyed it much, much more. I laughed a lot, and like with orange county, I am unable to see why people are so negative towards this little movie. Rosalee and her best friend Cathy are obsessed with the actor tad Hamilton, who plays a sweet, sensitive, romantic man on screen. In real life, he's anything but and its getting hard for him to get roles. His agent comes up with this brilliant idea: a girl can win a contest to meet him and he can look like a better person. Rosalee has stars in her eyes and enters the contest. Her male best friend, Pete, who could be called this movie's Ducky (from pretty in pink) and is in love with Rosalee but hasn't even told her yet. Only problem? Once tad gets to know her, he loves her too, and now they're competing for her. It's a very funny, very sweet movie about how actors can be nothing like their characters (for better or worst)
3 people found this helpful

Didn't care for the standard ending though. Pete irritated me more than Ted even though both were duplicitous. Acting was such that it felt like Ted had actually had an epiphany and was evolving. Pete, not so much. Rosalee's character was charmingly vacuous.

H+EReviewed in the United States on April 26, 2004
3.0 out of 5 stars
teenage fun not without problems
Verified purchase
This is your typical love triangle, which showcases three very attractive actors. I have to admit that I love this movie genera (clueless girl-gets-guy-in-the-end). Although this movie was cute, there were several areas in the script that I found problematic. First of all, could the lead (whose character was too cutsey to be believable) really be so clueless that she doesn't know that her friend is in love with her after he tries to sabatoge her dates? What about after this quick-witted guy can't find the words to tell her "something"? And although Topher Grace is a good actor, I would have liked to have seen them use an actor without standard good looks, perhaps an actor cute but heavy (in the scene with both guys shirts off, they both looked pretty hunky). The gags in this movie are heavy handed, and usually last about twice as long as they should. At the end of the movie (and this may "give away" the predictable end), we don't know what happens to Tad. Was he reformed by his time spent with Rosalee, or did he return to his former bad-boy ways? It also wasn't clear to me if he didn't love her, or if he DID love her and just didn't know how to express it in any way other than as "the actor". Is it all that we care about that Rosalee gets goes back to the guy who has loved her all his life? Another warning: some of the dialogue is unbelievably cheesy, although it is recognized as cheesy in the movie.
For a more engaging movie that ends with satisfaction instead of open questions, see Princess Diaries instead. If you want hunky guys with their shirts off and can overlook the problems, see Win a Date with Tad Hamilton.
4 people found this helpful
See all reviews
Back to top
Get to Know Us
Make Money with Us
Amazon Payment Products
Let Us Help You
EnglishChoose a language for shopping. United StatesChoose a country/region for shopping.
© 1996-2022, Amazon.com, Inc. or its affiliates