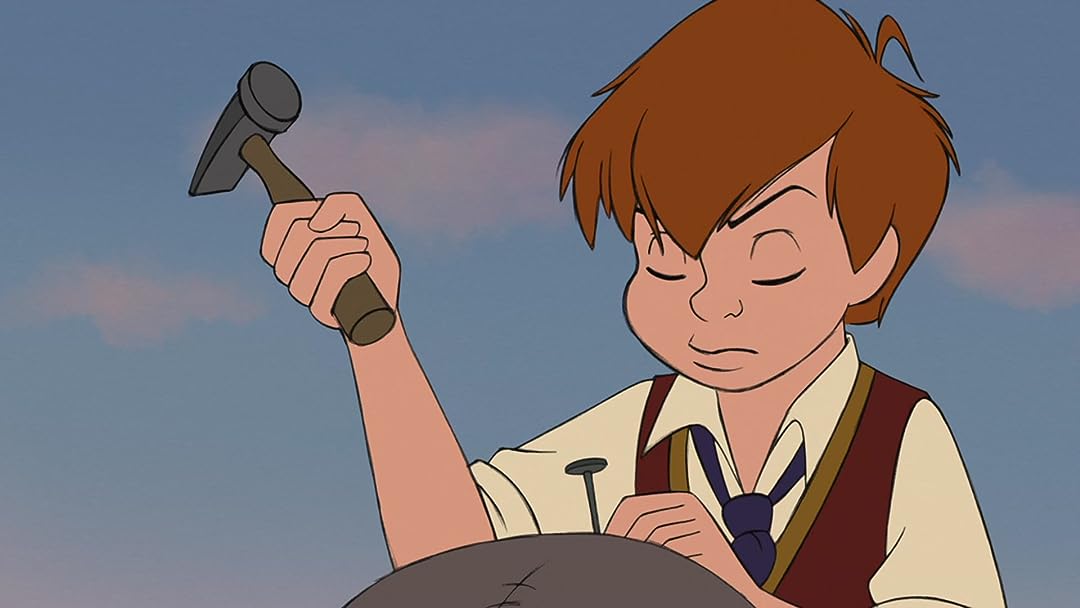 Paul S. PersonReviewed in the United States on March 28, 2021
3.0 out of 5 stars
Too Similar to the Other Movie
Verified purchase
This is actually not that bad a movie. The animation is quite nice. And, for those who found /The Many Adventures of Winnie the Pooh/ disjointed because it was an anthology rather than a single story, this may be better, as it is one story.
Those who haven't seen the former film might also find this to be, not just a fine movie, but a good one. I was a bit distracted by the voices, which don't entirely match. This would probably not matter, but it didn't take much to figure out what the "reveal" would be.
OTOH, those with small Pooh-friends at home should find this pleasing to them.

Christina JenkinsReviewed in the United States on January 7, 2016
4.0 out of 5 stars
Not my Pooh Bear, but maybe someone else's
Verified purchase
It was a nice effort to recapture what made 1977's The Many Adventures of Winnie the Pooh so great. It hit some of the nostalgia targets, and was a decent story line based on the stories from the books. It was updated, so the jokes were slightly more edgy than earlier versions - whether that is because the audience was expected to be older, or because they are the children of the 21st century, I'm not sure. It was cute, though, and I hope it captures the imagination of the younger kids and imparts to them the magic that is Pooh Bear, like it did for me and others of my generation.
16 people found this helpful

LauraReviewed in the United States on November 25, 2019
1.0 out of 5 stars
Gave my toddler nightmares
Verified purchase
Ok, normally I am very cautious about what my two year old watches. He doesn't watch much tv in general, but after we got a Winnie the Pooh book from the library he has been obsessed with Tigger. I decided it would be a fun idea to buy the movie and let him enjoy the "live" version of Tigger. This movie has a "monster" in it. For older kids I'm sure it's not scary in the slightest. But my son was terrified and we had to turn it off. He then woke up crying in the middle of the night about the "tigger moster". So parents of toddlers, I would not recommend. I never in a million years would have thought a Winnie the Pooh movie would traumatize my child.
4 people found this helpful

M. RomanReviewed in the United States on October 24, 2018
3.0 out of 5 stars
No originality seal
Verified purchase
It doesn’t look very official. No seal on the box. Just cellophane wrapped. Could be a copy.
6 people found this helpful

Ulf ClaessonReviewed in the United States on May 8, 2017
5.0 out of 5 stars
Great film, great transfer!!!
Verified purchase
As a lover of animation this title was a must on bluray. The DVD is great, but on bluray the loving details stand out with a clarity that elevates the film to lofty heights. A most satisfying purchase. Wish that more animaition these days had this deceptive simpleness. And gentleness.
8 people found this helpful

S&amp;H Put.Reviewed in the United States on May 23, 2017
5.0 out of 5 stars
Perfect!
Verified purchase
My 3 year old thinks this is hilarious! It's a special treat when he gets to watch it. The music is cute and catchy. The jokes are consistent with A.A. Milne's writing of clever word-play that make it enjoyable for adults as well.
7 people found this helpful
See all reviews
Back to top
Get to Know Us
Make Money with Us
Amazon Payment Products
Let Us Help You
EnglishChoose a language for shopping. United StatesChoose a country/region for shopping.
© 1996-2022, Amazon.com, Inc. or its affiliates