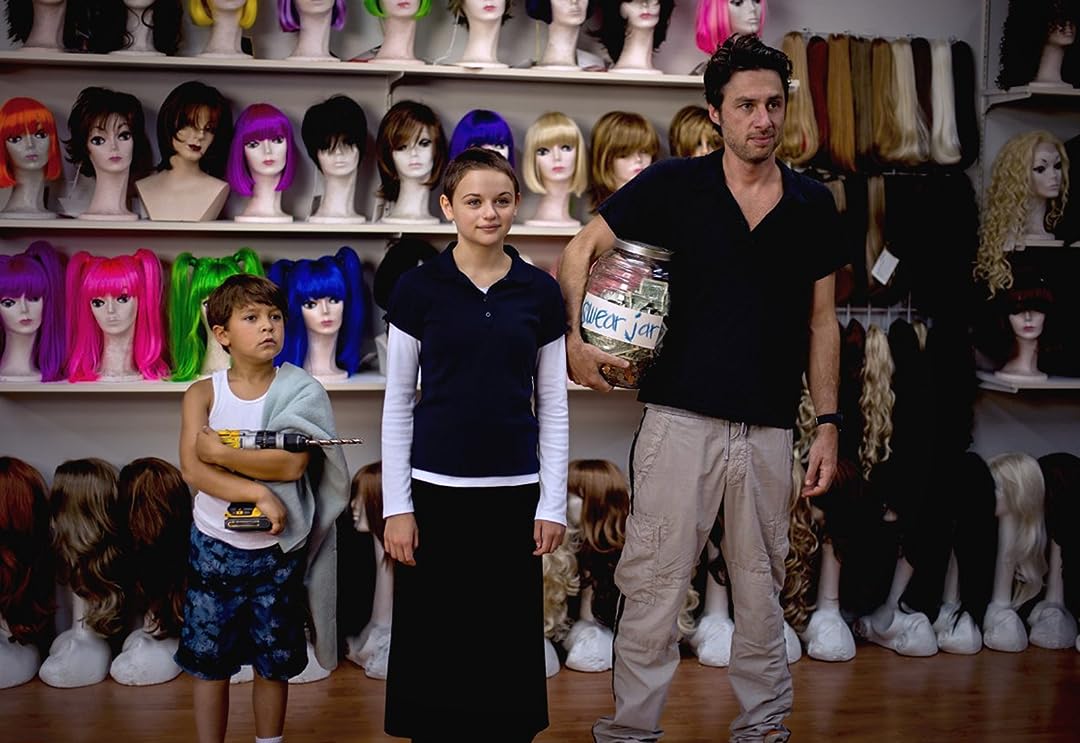 Wish I Was Here

(500)6.61 h 47 min2014R
From Zach Braff, the creator of Garden State, comes this touching and funny story about being a parent, spouse and child...all at the same time.

Kira S.Reviewed in the United States on November 20, 2017
3.0 out of 5 stars
Watchable movie, nothing special, wouldn't watch again
Verified purchase
I wanted to like this movie. I saw an interview with Zach Braff where he talked about how much of himself and his life he put into the movie, and it was savaged by the critics, not so much for content but because he used Kickstarter to raise some of the money for the film. Don't they realize that the only way you can tell the story YOU want to tell is by financing it yourself, and if you don't have all the money you need and your fans are willing to support you, I say more power to you.

That said, even though Zach Braff is a little too old to be considered a millennial, I am really sick of stories of the man-child who expects everyone else to cater to him so that he can follow his dream. If you're going to do that, DON'T get married and DON'T have children until you have followed your dream and either found success or accepted failure. In the movie, he is a failure as an actor, he is a failure as a homeschooling parent, and he is a failure as a brother. The only role he is even moderately successful in is as a son, and even then, his father thinks of him as a failure because he isn't providing for his family.

There are a lot of good performances in this movie. Kate Hudson's performance is deep and moving, as is Mandy Patinkin's. Zach Braff - well, no matter what film or TV show he's in, he's Zach Braff. I liked him in Scrubs. He was okay in Garden State. He was okay in this movie. I did not particularly admire his character, but I'm sure it was as true to life as he could make it. I have to admire him for showing what it's like to be an actor, although we all know that he was not the failure that the character in this movie was.

K. EricksonReviewed in the United States on July 8, 2015
5.0 out of 5 stars
Mature and intimate gem—Keep 'em coming, Zach Braff!
Verified purchase
Today I heard Zach Braff in an interview with Sam Jones, saying that the reactions to his attempts to do a new kind of indie film... and the reactions to the film itself, this one... had pretty much made him not want to dive deep inside himself for any more personal films for a long time.

I rewatched Garden State for the first time in years, right before downloading and watching Wish I Was Here this evening, and I must say even more than GS, this film is a mature and intimate gem. Whatever negative reactions the film got could only have been from people who just don't get how to watch a portrait like this and appreciate your having allowed us in.

The film is thoughtful, gentle, quietly funny, and heartrending. It doesn't look for villains and allows for a dozen kinds of heroism. It's got a rare kind of spiritualism that's about both the human spirit and the infinite—in whatever form we find it, at big moments and small. Braff wastes no time in judgements and writes the reality we all live through, with no varnish and no supersizing for the screen. Thank goodness.

If it's true that the filmgoing audience has become too cynical for such portraits, then we may never see another Places in the Heart, or Steel Magnolias, Before Sunrise, or even My Dinner With Andre.... In Wish I Was Here, it feels like Zach Braff has a grasp of the quiet moments in all of those films and still manages some of the self-aware humor of a young Woody Allen.

I laughed out loud *and* I cried. I forgot that I wasn't inside the scenes at times. I watch enough film to know that achieving any one of those is becoming rarer and rarer—kudos for your hat trick, Mr. Braff.

I hope anyone reading this review will put aside the chatter and allow this un-jaded little gem to get under their skin for a little while.
4 people found this helpful

LReviewed in the United States on May 16, 2015
5.0 out of 5 stars
Wish I saw this film earlier...
Verified purchase
Directed and starting Zach Braff, Wish I Was Here (2014) is a dramatic comedy about a certain dysfunctional family who deals with money issues, career choices, and approaching death in a family. Zach Braff plays Aiden, a California want-to-be actor married to an office worker Sarah (Kate Hudson) with two kids who they send to a religious Jewish school. Aiden is struggling to make a career for himself in the show business. His wife Sarah, is the only one who supports the family with her steady job. That creates friction in their marriage. By the way, this must be Hudson's best role I have seen so far. Not only does she look beautiful in the film, her acting is very touching. Along the way, the viewer is introduced to Aiden's ailing father and quirky brother...

Everything in this film seems "perfect"...most importantly the storyline is simple yet compelling...I think everyone in the world can find something in this film that they can relate to. The message of the film is universal..."cherish every moment with your loved ones...it is never too late for forgiveness, amends, reconciliation,...and never give up...even if you fail every time"...because no one said that life is easy.
4 people found this helpful

wishUnOOReviewed in the United States on January 4, 2015
5.0 out of 5 stars
soo much more than a movie!
Verified purchase
I watch A LOT of movies (guilty pleasure:) and I went back and forth on renting this movie. Some trailers for these movies make the viewer think that you have found a hidden gem, then you wind up screaming at the credits about what a terrible and I mean terrible(!) Waste of time and money...ugh... "Wish I Was Here" on the other hand made me debate over and over asking myself "do I dare??? Will it break my heart and make me never want to watch another movie again" I did. Turns out I get the trailer now there are too many things to help anybody understand what amazing movie this truly is.
If watch this film you will think about it for days, you will understand that amazing movies cannot be summed up in a small two minute trailers, and you will truly wish you were here
7 people found this helpful

Carol Lynn HargroveReviewed in the United States on December 20, 2018
1.0 out of 5 stars
Don’t make a mistake and buy this DVD
Verified purchase
I bought this DVD. Right after I bought it I sent a message asking if it will play in the US. No response. They claim it stated that it wouldn’t play in the US. Unfortunately I did not see this. . I paid $20.00 for it. Took the celephane off and stuck it in my player. Bingo it’s officially mine. Well I’m not throwing it away. They can keep my money and the DVD too. So beware make sure you read everything or you will kiss your money goodbye too. They need the money worse than I do. Wanted to charge a 25% restocking fee. Geez it doesn’t take any effort to lift an arm and set it back on the shelf.

Bob BennettReviewed in the United States on November 19, 2014
5.0 out of 5 stars
A good surprise from Zach Braff
Verified purchase
Don't expect Zach Braff (star, co-writer, director) to be his goofy "Scrubs" character. This one is serious. People don't talk much about the transition in life that occurs when parents die, but it's real and sometimes difficult. So here we have a movie that deals with all the dysfunctions that a family can generate, and everyone emerges better and stronger, with happy endings for the brothers. Kate Hudson excels in her role (and I was even struck by the fact that she's getting prettier as she ages). Favorite quote: Mandy Patinkin (the dying father) to Kate (his daughter in law): "Someday you will be a great matriarch". Kate: "I already am." - pause - "Well, trying to be." The film reeks of being a low-budget, indie, and that's not bad. It's one I'm going to add to my library.
One person found this helpful

JoshReviewed in the United States on September 6, 2015
5.0 out of 5 stars
Real + Smart.
Verified purchase
I've been a fan of Zach Braff since Scrubs and Garden State. The ladder of those is what struck
my serious interest in this film. I was fortunate enough to be a part of the Kickstart campaign and
received many goodies for this film, one thing I didn't get was actually seeing the film or owning it.
I ordered this and having 3 different viewing options is great! This film is like an emotional roller coaster
so be prepared when you go to watch it. It's very clever in it's writing and the best way I can describe the
film is; smart. It is a smart film about real life situations with relatable and realistic characters.

HarryUSMCReviewed in the United States on November 4, 2014
5.0 out of 5 stars
This movie highlights the flaws most often ignoref
Verified purchase
good lesson to parents and all families that love, kindness, and understanding is the the reason for life.. but the greatest of all is LOVE.. unconditionally.. stop trying to prove yourself to others.. do the best you can.. talk with your children not down to them... they are not your friends.. they are YOUR CHILDREN... don't buy their love... and certainty don't curse four letter words with them... respect equally.... the movie highlight all the flaws in such typical families that tend to use lots of four letter words along side their kids thus there is no respect for the parents.... once again.. Nooo Cursing in front of your kids or even with your kids.... not KOOLLLLLLLL!!!
See all reviews
Back to top
Get to Know Us
Make Money with Us
Amazon Payment Products
Let Us Help You
EnglishChoose a language for shopping. United StatesChoose a country/region for shopping.
© 1996-2021, Amazon.com, Inc. or its affiliates