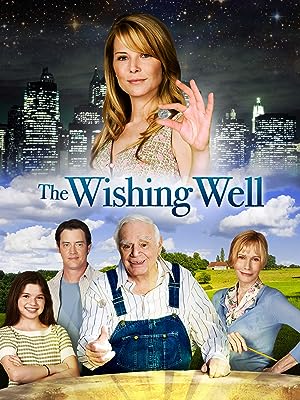 (5)6.31 h 25 minG
Rated TV-G After a wish is made in a magical well, a reporter finds herself moving from the lights of the big city to the pleasures of a small town and finds happiness from the values that eluded her.

Edward S. RichmondReviewed in the United States on August 23, 2020
1.0 out of 5 stars
What is the "faith" in Faith and Family?
Verified purchase
If this movie were not shown in a channel called, "Faith and Family," I would not be so negative about it. I know we can have faith in anything, but it is a repugnant thing to see a man representing his church as pastor or priest encouraging someone to believe in a wishing well. We can have faith in Almighty God or in a wishing well. We cannot have faith in both. I could go on explaining why this is true; however, the point here is that as a movie in a channel for faith and family, I can only detest such ignorance. Ask our Father (Almighty God) in Jesus' name, and you will receive. If by the word "Faith" in the name "Faith and Family has anything to do with Biblical faith, this movie should be removed. If that is not what is meant by faith, I don't want this channel.
4 people found this helpful
Report abuse

Amazon CustomerReviewed in the United States on January 1, 2021
5.0 out of 5 stars
Loved it!
Verified purchase
Great movie.
Report abuse

Michael HReviewed in the United States on August 23, 2020
4.0 out of 5 stars
the message to slow down and appreciate the small things
Verified purchase
I enjoyed this movie.
Report abuse

H. BalaReviewed in the United States on August 30, 2020
4.0 out of 5 stars
"I wish I knew how to be happy."
The movie opens in the most adorable way possible, with a little girl's voiceover: "I live in Slow Creek, Illinois. And if you need a wishing well, we have one." After which it's a while before we see her again. Instead, we eyeball Cynthia Tamerline (Jordan Ladd) and her best life. Cynical, cosmopolitan Cynthia, and maybe the down-to-earth folks she meets later on can drop other words that start with a "c." In New York, Cynthia doesn't hobnob with down-to-earth folks. She hangs out with her own ilk, the snooty, jet-setting kind who order fancy coffees and peruse gossip rags such as Celeb magazine.

Celeb magazine is where Cynthia works as a journalist. Next week marks her tenth year over there. But New York is your typical what-have-you-done-for-me-lately burg. Thing is, Cynthia may be jaded but she's still clinging to her tattered integrity. She won't make up rumors and lies to expand readership, never mind that her publisher tells her you could always retract those lies. She hadn't had a lead story since four months back. That's an eternity in the publishing world.

Cynthia finds herself demoted to Celeb's less hip sister periodical, Great Housekeeping magazine, and absorbing a veiled threat of termination if she doesn't come thru with the bigger, sexier interviews. She's dispatched to the sleepy town of Slow Creek, Illinois to write a piece about a famous(ish) wishing well. A wishing well of which wishing properties admittedly hadn't worked in a while. There goes Cynthia, in exile.

In Slow Creek (pop: 6473), Cynthia instantly antagonizes townspeople left and right, well, except for the affable, old innkeeper Big Jim (Ernest Borgnine) and, outside the inn, a little girl at the wishing well.

After checking in for her overnight stay at the inn, Cynthia doesn't waste time making tracks for the local newspaper HQ where she fails to ingratiate herself with the staff. One person actually remarks: "She's got a real case of the me-mes." But small town hospitality wins out, and Cynthia gets the okay from the owner editor of the Slow Creek Chronicle (est: 1887) to research their computer archives and their physical archives stored at a manky, old warehouse where a bird does Cynthia dirty the way some of the townspeople probably wished they could.

I told you plot spoilers. That Cynthia Tamerline is obnoxious and dismissive isn't a spoiler. Truth is, I would've been hating on Cynthia if she weren't so kind to that little girl at the wishing well. Sensing how sad the little girl was, she joins in with her in making a wish. Little girl wishes for her widower dad to be happy; Cynthia: "I wish I knew how to be happy."

One of the popular premises that these made-for-tv movies sometimes mine is the one about the alternate reality. Having gotten her wishing well story, Cynthia falls asleep on her plane back to New York... and wakes up right back at the Slow Creek Inn.

She's further baffled when she glances at her ID that now indicates she's now from Petersburg, Nebraska. Her wardrobe is now an assortment of frumpy clothes. And she'd apparently signed a week-to-week agreement at the inn. It's probably because she'd somehow, somewhen agreed to work for the local paper. Adding to her bafflement is that no one in New York - her work or her best friend - remembers her. Her unctuous assistant now has her office.

It takes a minute for Cynthia to settle into her new reality. The wonder of it is that her new boss, Mark Jensen (Jason London), stays patient(ish) with her even though she'd ignored the assignment he'd given her. I mean, Mark's got his own set of problems. He's a widower raising his young daughter Abby (Jaden Gould) on his own. And his newspaper's not doing so well. On a good year, it barely breaks even. And now he's got a newspaper syndicate baron pressuring him to sell the Chronicle. If Mark sells, he can afford his little girl's future. If he sells, the Slow Creek Chronicle stops being the heartbeat of the town, stops giving Slow Creek its identity.

Meanwhile, there's Cynthia experiencing character growth. Turns out, covering the town's mundane happenings like the city council meeting or what's on the police blotter is improving her writing. Or maybe now she's putting more heart into it. It's a far cry from when she was trying to land an interview with mega-celebrity Angelina Jol- er, Angela Ashton. In Slow Creek, a breaking story concerns a local and his collection of cigarette lighters.

This was an enjoyable watch for me, maybe because I cut my teeth on alternate reality stories. The romance between the two leads is nicely developed if hackneyed. The best moments have to do with Cynthia's hanging out with little Abby, who is a sweetheart. The bond they grow between them is a beautiful thing. Expert old hats Ernest Borgnine and Sally Kellerman - she's terrific as the diner lady - lend color to the plot. And I was touched by the simple yet moving eulogy of Martin Sixt whom we never see onscreen but who has palpable impact on the story. Yeah, it's worth a watch.

Report abuse
See all reviews
Back to top
Get to Know Us
Make Money with Us
Amazon Payment Products
Let Us Help You
EnglishChoose a language for shopping. United StatesChoose a country/region for shopping.
© 1996-2021, Amazon.com, Inc. or its affiliates