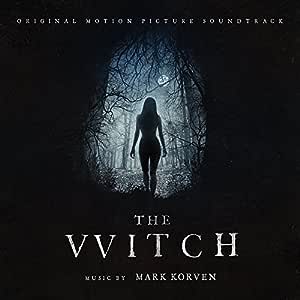 The Witch is an upcoming horror film directed by newcomer Robert Eggers. Set on the edge of a dark forest in 17th-century New England, The Witch is a tale of only family’s terrifying unraveling under the specter of black magic, possession and an unknown evil. When an English farmer leaves his colonial plantation and relocates his family to a remote plot of land, strange and unsettling occurrences begin happening immediately – animals become vicious, crops wilt and one of the children disappears. Paranoia grips the family as they accuse one of their own of witchcraft. Any great horror film has an equally impressive composer. The Witch is no different. Mark Korven has created a one-of-a-kind spine-chilling score by employing obscure instrumentation from hurdy gurdys to nyckelharps. The result is a discordant, spectral affair that draws the listener into the misty world of the family’s farm as horror permeates throughout.

4.5 out of 5 stars
4.5 out of 5
69 customer ratings
How does Amazon calculate star ratings?
Amazon calculates a product’s star ratings based on a machine learned model instead of a raw data average. The model takes into account factors including the age of a rating, whether the ratings are from verified purchasers, and factors that establish reviewer trustworthiness.

Danny
4.0 out of 5 stars File under weird listening experiences
Reviewed in the United States on March 5, 2016
Verified Purchase
This is my first Mark Korven score and it will most certainly be filed in the "frightfully strange" area in my soundtrack collection. It also contains one of the most eerie and nail biting cues ever...one which I can barely stand to listen to. Pino Donaggio's cue "The Mannequins" from the film "Tourist Trap" originally held top honors of being one of the weirdest things I've ever heard in a score but I think I'll replace it with "Witch's Coven" (track 14) from this film. I'm usually listening to film scores all the time in my man cave at home and my wife has become accustomed to hearing all of the various music coming from behind the door over the years. This is the first time she busted in screaming for me to turn it down! It's that good...I mean bad...no scary....it's just weird and all that was just mentioned. This is definitely not a score for everyone. Your certainly not going to kick back and relax with this, nor probably play it in the background while doing homework or reading a book (well...I guess if you were reading a horror it would work). I'm still trying to figure out if it should even be called a score. Some parts are very score-like...but a large portion of it would probably best be considered ambient soundscape designed to maximize psychological horror. The effect of the "music" is very profound and unique indeed.

There really is only a handful of musicians contributing to the horror here. Composer Mark Korven plays the Tenor and Bass Nyckelharpa (a very interesting looking stringed instrument played with a bow and has wooden keys near the frets...had to look that one up), cello, and waterphone. Katherine Hill plays the Viol, Nyckelharpa, and provides vocals on "Standish" (track 16) and "Isle of Wight" (track 15). Ben Grossman plays the Hurdy Gurdy and the Jouhikko (another interesting stringed instrument originating from Finland). As you can see, there are a lot of unique and old world instrumentation that is used in this score. The Element Choir, directed by Christine Duncan, also provides the strange vocals heard throughout the soundtrack. The choir is amazing and I would love to see some footage from the rehearsals for this soundtrack....just because of the unique sounds they produce. I have the CD version of this release and I'd have to say that the recording is really amazing. For example, "The Goat & The Mayhem" (track 12) has these rattling stick sounds that come out of the speakers like they are falling on the floor of your room. There is another sound within this track that sounds like a percussion instrument (might be more sticks) that tap in such a way that it sounds like someone is running from a distance and into one speaker and out the other. This one track then crescendos into a massive dissonance of sound that is just wrenching in the end. There are some cues that are a bit more like....music. The opening cue entitled "What Went We" (love that title) uses some of the unique instrumentation and cello in a more melodic way. "Isle of Wight" (track 15), performed by Katherine Hill is very well done and has a very "old world" vibe to it, as well as, "Standish" (track 16). The composer uses some interesting percussion throughout the score as well. It's often disjointed and unsettling creating the feeling of tripping, falling, and up again rather than serving a function like keeping time or rhythm. You'll hear this in cues like "William and Tomasin" (track 10).

This score is certainly a strange one. If your a fan of Joseph Bishara's film scores, you might want to check out this one from Mark Korven as well. Both composers toss traditional film scores out the window and prefer to toy around with experimental techniques in conveying atmosphere, mood, and musical psychology upon their listeners. Who is Mark Korven anyway? Doing a little research and I found out that he did the music for "The Cube" (1997) but has mostly composed for documentaries, TV movies, and film shorts. I love his use of really old instrumentation in this film (some which I've never heard of). I haven't seen the film yet but I've heard good things about it. Very excited to see this film and see how the music...or soundscape...plays out in it.

The CD version of this soundtrack contains 16 tracks and runs about 39 minutes. It's released through Milan records and comes in a digipack but no insert. The inside cover contains musician and choir credits while the back cover has track listings. It's a very strange release indeed and certainly not for every film score fan. It's not something that I am going to pop into the CD player everyday by no means but I have some ideas for that "Witch's Coven" cue during the Halloween season! It's certainly a soundtrack to appreciate and I especially like hearing some of the unique instrumentation that you don't find traditionally in film music. I do think that Bishara fans might want to check this out however. Enjoy it, be puzzled by it, just be careful not to freak yourself out!

A. J. Christian
3.0 out of 5 stars It is just a plain black record.
Reviewed in the United States on April 15, 2018
Verified Purchase
I am not reviewing the music, as I haven't listened to it yet. I just wanted to warn others that the record is NOT a Starburst colored vinyl, but just a plain black record. It's still a gorgeous record, and with the label it certainly fits the subject matter, but people should be aware that it's either luck of the draw, or flat-out false advertising whether you'll get a black or colored record.
Read more
4 people found this helpful
Helpful
Comment Report abuse

Chain_Choked
5.0 out of 5 stars Great original music from a terrific movie.
Reviewed in the United States on September 9, 2017
Verified Purchase
My girlfriend surprised me with it because she knew I loved the movie and sometimes listen to the soundtrack when I draw and it sounds even better on vinyl. Packaging is great and the vinyl itself has a beautiful design. If you're a fan of the movie and liked the soundtrack then I definitely recommend it. (for some of the people who are complaining about it being boring or not very good to listen to as a standalone album did you not watch the movie? I mean it's not too hard to take a few seconds on youtube to listen and see if it's something you'd want to own on vinyl.)
Read more
2 people found this helpful
Helpful
Comment Report abuse

J.J.
3.0 out of 5 stars Great music needs be the pressing quality control
Reviewed in the United States on June 11, 2020
Verified Purchase
Great music but yes I wish they eould show their consumers some respect and get these vinyl pressings right. Pops and clicks all over the beginning of side 2. My copy of the Lighthouse us the sane. We pay good money for new vinyl and shoukd expect quality. Get your quality control under control, labels. I understand this is a difficult industry being as many of the pressing plants are under strain and even outdated but Indie labels do a better job of quality control and you shouldn't be any less scrutinizing of your products.
Read more
Helpful
Comment Report abuse

Ashley Valencia
5.0 out of 5 stars Like butter
Reviewed in the United States on April 17, 2017
Verified Purchase
It's haunting and beautiful. A must have for horror fans and vinyl collectors alike.
Read more

LK
2.0 out of 5 stars Black vinyl
Reviewed in the United States on January 7, 2020
Verified Purchase
FYI- I received the regular black vinyl and not the white swirl that is pictured in the reviews. I would have purchased it somewhere else if I had known this.
Read more
One person found this helpful
Helpful
Comment Report abuse

Mike
5.0 out of 5 stars Magnificent!
Reviewed in Canada on July 22, 2016
Verified Purchase
I had recently watched "The Witch" and instantly fell in love with the soundtrack. While the acting itself was pretty great, I really felt that the soundtrack played the lead role in the film and really helped to drive the story.

The pressing itself is a fantastic silver/black starburst and comes beautifully packaged. It also includes a digital download of the album, which is great for times when the turntable isn't handy.
Read more
One person found this helpful
Helpful
Sending feedback...
Thank you for your feedback.
Sorry, we failed to record your vote. Please try again
Report abuse

D.carroll
4.0 out of 5 stars Four Stars
Reviewed in Canada on September 27, 2017
Verified Purchase
👍
Read more
One person found this helpful
Helpful
Sending feedback...
Thank you for your feedback.
Sorry, we failed to record your vote. Please try again
Report abuse

Braden
1.0 out of 5 stars NOT coloured vinyl
Reviewed in Canada on February 27, 2020
Verified Purchase
This is NOT the starburst vinyl as it is advertised. This is the black vinyl pressing
Read more
Helpful
Sending feedback...
Thank you for your feedback.
Sorry, we failed to record your vote. Please try again
Report abuse