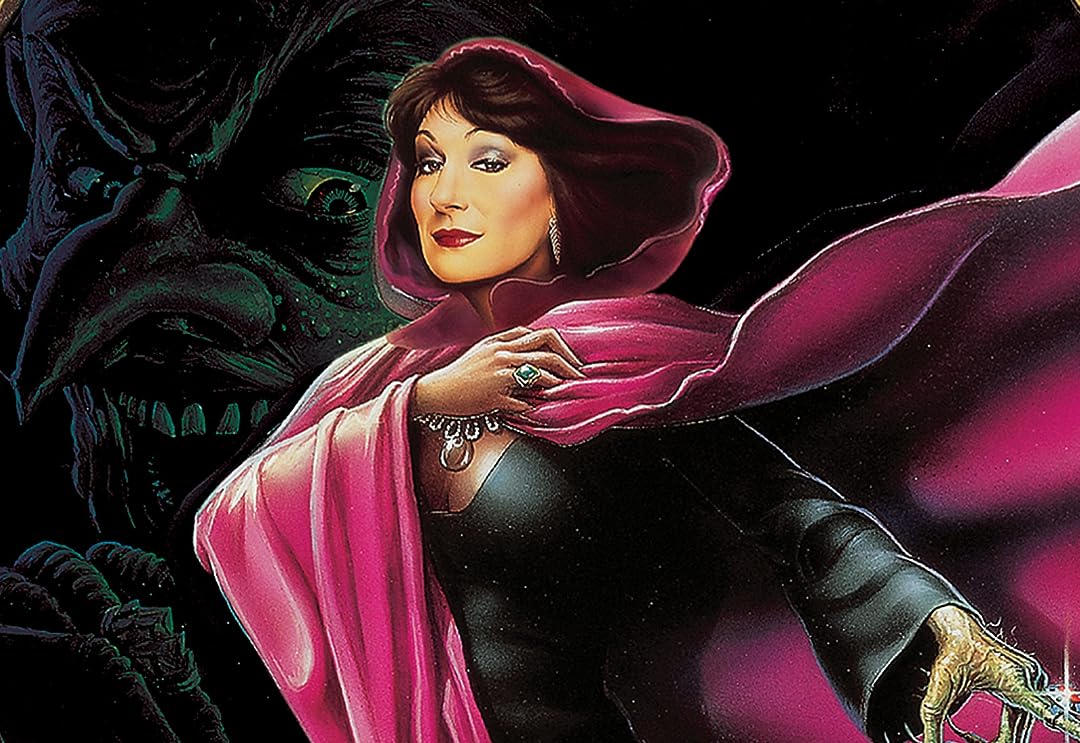 (8,581)
6.91 h 31 min1990X-RayPG
A recently orphaned young boy is taken to England by his grandmother. At their hotel, he stumbles across a witches convention plotting to rid the world of children.

Paul S. PersonReviewed in the United States on January 29, 2020
5.0 out of 5 stars
Letterboxed at Last!
Verified purchase
After 9 years of waiting, I finally get to see this film as it was shown in the theater!
The film itself is excellent: who isn't interested in a film featuring the world's Head Witch?
Who, when she takes off her face/upper body mask, is everything you could hope for in a witch?
Now for the notes on the BD:
This is an MoD BD (so far as I can tell). This means that it is similar to a DVD-R:
a) the aspect ratio has been correct on every DVD-R so far, and the MoD BDs appear to be maintaining this tradition
b) the quality of the source materials is not always as good as might be wished; in this case, however, I saw no problems; still, other reviewers did, and to them I say: this is how it is with Mod BDs/DVD-Rs
c) Warner Archive DVD-Rs tend to have a menu with two choices ("Play" and "Trailer") this BD has a main menu with a third choice ("Subtitles"); the popup menu is the same, and does activate the subtitles, which turn out to be English SDH; the film is a chapter every 2 to 3 minutes or so, possibly inherited, so to speak, from the pan-and-scan DVD (Warner Archive DVD-Rs mostly have one chapter every 10 minutes).
These discs are not made for elitists. They are not made for those who value special features. They are made for people who want to /watch the movie/. And who have been waiting a long time to do so. They are films whose market cannot support the effort required for a full-scale DVD (never mind BD), but a smaller market for them does exist.
My advice on these is this: if you have been waiting and waiting for the film, buy it. The chance of it coming out on a full-scale DVD or BD is nil, for what market there is is being exhausted by the DVD-R/MoD BD. But if you are picking a few films from a list of films, all of which you want to own eventually, pick the full-scale DVDs/BDs first. You can always buy these when you either get desperate for them or run out of other films to buy.

Mark N.Reviewed in the United States on April 24, 2018
5.0 out of 5 stars
This movie is an interesting and delightfully wicked "Cult Classic" based on Roald Dahl's children's book of the same name.
Verified purchase
This movie is an interesting and delightfully wicked "Cult Classic" based on the Roald Dahl classic of the same name. It's about woman and her pre-teen, orphaned grandson who take a room at a seaside hotel. Among the guests are a group of women set to attend a convention. The guests are unaware that the group of women who are to attend the convention are actually witches. The grandson ends up chasing his escaped pet mouse into the convention hall just as the disguised witches assemble into the room, locking the door behind them, not knowing the boy is hidden behind a folding screen inadvertently trapping him in with them. While hidden it's there he learns the ulterior motive of the convention. Witches hate children and plan to kill them by spiking food with a formula that turns all those who consume it into mice. While hidden in the room, the grandson watches as all the witches remove their wigs exposing itchy, wart covered bald heads. he then sees the grand high witch (Angelica Huston) transform from a beautiful human form, into her actual form, a hideous, hairless creature. The witches, who despise the smell of children discover the boy and transform him into a mouse that then escapes the room and somehow gets back up to his room and warns his grandmother. The rest of the show deals with the grandmother and grandson trying to stop the witches and ends with the boy being able to transform back into his human body. This movie can be a little intense and I'd advise parents and guardians to keep that in mind if they allow kids under 8 years old to watch this movie.
21 people found this helpful

Rock HardReviewed in the United States on September 28, 2019
1.0 out of 5 stars
Not The Original Theatrical Version
Verified purchase
I saw this in the theater when it first came out and the part where Angelica Huston is on the stage anxiously shaking those hips, was cut out.

Today, even on television, there's a ceaseless stream of unbridled nudity; but, a woman, vigorously shaking her hips is too much?

I returned the edited movie.
19 people found this helpful

Nick ZegaracReviewed in the United States on September 22, 2019
3.0 out of 5 stars
Weird/flawed flick by Nicholas Roeg in a gorgeous 1080p transfer
Verified purchase
Flawed narrative, awkward structure, and not terribly compelling performances from everyone except Anjelica Huston do much to blunt the impact of this nightmarish fable about an enclave of witches preparing to murder the children of the world with a magic potion that will turn them all into mice. Huston's over the top performance is the standout, as is the buoyant score from Stanley Myers. Repulsive special effects from Jim Henson augment the horror aspects of this wicked little tale that was, presumably pitched at kiddies. Warner Archive's 1080p transfer is solid but, owing to film stocks of the day, features minor fluctuations in color density and contrast. Nothing egregious. So enjoy, if this is your cup of tea. I didn't care for the movie and was more impressed by the quality of the remastering effort. Judge and buy accordingly.
9 people found this helpful

JoeReviewed in the United States on September 27, 2017
5.0 out of 5 stars
Just like I remembered it but with extra details (that I had forgot)
Verified purchase
I watched this movie as a kid. Out of the blue one day I remember the plot of this movie, not exactly sure why the plot popped in my head but it did. I thought about it on and off for a few weeks and then decided that I needed to find this movie. Didn't take long to find once I started looking. I purchased the movie and pressed play. I had with my picky son (10) and daughter (12) with me and they both sat through the entire movie. I'm even pretty sure they watched it a second time.
15 people found this helpful

SimonReviewed in the United States on March 25, 2017
5.0 out of 5 stars
Love The Movie, Not The DVD
Verified purchase
I give the film itself five stars, it's one of my childhood favorites. The DVD I found quite lacking. It has no special features, at all, just the film, language options, and a way to jump to a scene (if you so choose).

The movie is presented in Full Screen format (I found no way to make it Widescreen, without distorting the picture). This means it will have black bars on the left & right sides, as you watch.

The film is rather grainy, which I don't remember it being. I could be wrong, since the last time I viewed it was many years ago. It was viewed with my Blu Ray player and 60" 1080p flatscreen, so maybe that made a difference?

With that being said, I still believe it's worth buying for the price. I really hope eventually they remaster it and release it on Blu Ray, but I'm not holding my breath. If you have a soft spot for this film, due to your own childhood, or have kids now I would definitely pick it up. Wonderful, imaginative, classic film!
4 people found this helpful

La Femme FatalReviewed in the United States on October 30, 2017
5.0 out of 5 stars
Very good, deeper than I thought
Verified purchase
It was a lot more dramatic than I expected in addition to being a child adventure movie. I didn't expect to start crying, but I did multiple times. Probably because the grandmother reminds me so much of mine that has passed and diabetes runs in my family. I don't think kids will have the same reaction because they are still young, and the dramatic sad stuff will go over their head. For them it'll be a euphoric action adventure. First time seeing this movie in my twenties, I'd recommend it for older kids who don't scare easily.
8 people found this helpful

Glenn B. WoodenReviewed in the United States on October 13, 2015
4.0 out of 5 stars
A Children's Tale Only Adults Can Appreciate
Verified purchase
A wonderful cautionary tale for children about the wiles of witches---although, its mildly adult situations make this more a film for grownups than for children.
Anjelica Huston is thoroughly convincing as the Grand High Witch. She is both sensual and sinister at the same time.
Mai Elisabeth Zetterling plays the grandmother of the protagonist. She is perfect as the teller of dark tales as she enjoys her cigars and helps her grandson recognize witches and avoid their evil schemes.
Rowan Atkinson, in his role as hotel manager Mr. Stringer, lends comic relief as the story develops in the Excelsior Hotel in Cornwall by the beach.
This is one of my must-watch films every fall as Halloween approaches.
18 people found this helpful
See all reviews
Back to top
Get to Know Us
Make Money with Us
Amazon Payment Products
Let Us Help You
EnglishChoose a language for shopping. United StatesChoose a country/region for shopping.
© 1996-2021, Amazon.com, Inc. or its affiliates