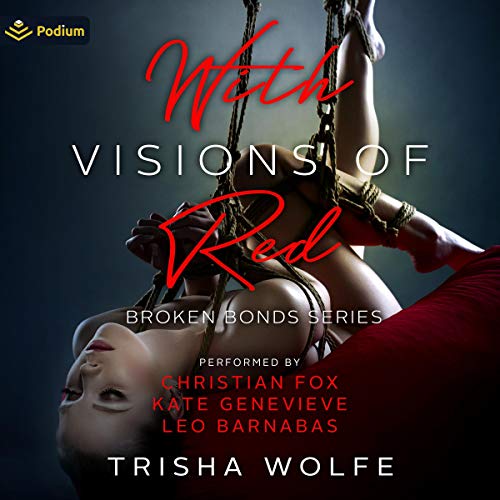 With Visions of Red

Criminal profiler Sadie Bonds knows blood. Her affair with the gruesome, dark world of killers began long before she started applying her analytical skills to investigate gory crime scenes. She gets inside the killers' heads, breaks them down, relates to them on an arcane level. She prefers it this way - because it's safer to ally herself with the villain than the victim. At least, that's how she's coped ever since she was abducted and tortured as a teen.

She will never be a victim again.

Now, Sadie's honed her skills in order to bring justice to these ritualistic offenders. Working alongside her colleagues, armed with sharp wit and a SIG, Sadie always catches her sadist. Until one ruthless serial killer gets inside Sadie's head, turning the tables. He knows her secrets. Her obsessions. The darkest, most deviant part of her soul.

When Sadie meets Colton Reed, dangerous stakes are raised as he threatens to unravel her control and reveal her darkest fantasies. The sexy-as-sin bondage rigger at an exclusive club pushes her boundaries, forcing her to acknowledge that side of herself she fears. Plunged into a realm of torture and suffering, pain and pleasure, Sadie balances on the razor-sharp edge of two intersecting worlds threatening to swallow her.

Passion and lust ignite. Dark and light battle. This explosive Broken Bonds series sets the exhilarating pace for a cat-and-mouse game where no one knows who's really pulling the strings.

Special invitation from Audible!
Learn more about Membership
List Price: $34.99
You Save: $12.00 (34%)
By completing your purchase, you agree to Audible’s Conditions Of Use
Sold and delivered by Audible, an Amazon company
Share

4.5 out of 5 stars
4.5 out of 5
79 global ratings
How are ratings calculated?
To calculate the overall star rating and percentage breakdown by star, we don’t use a simple average. Instead, our system considers things like how recent a review is and if the reviewer bought the item on Amazon. It also analyzes reviews to verify trustworthiness.
Top reviews

JayEssReader
4.0 out of 5 stars Amazing tale of personal demons vs actual monsters
Reviewed in the United States on March 8, 2019
Verified Purchase
I loved this story. As a big fan of shows like Criminal Minds, this was my first foray into the subject in book form. Our heroine Sadie is a profiler, a hunter of killers. While she hunts for a monster, her dark and painful past make her feel like her own kind of monster. She meets a mysterious man who also battles the monsters of his past. It's all so haunting and beautiful, as well as sexy and suspenseful. I could not put it down!
I loved the interplay between Sadie and Colton, how he both wanted to dominate her and worship at her feet at the same time. It felt like a realistic and very fresh take on this type of relationship. Instead of him being a typical alpha/Dom who forces her and everyone else to submit to his whims, Colton and Sadie had what felt like a much more equal power exchange.
The reason I took away 1 star was that in truth, Colton's back story does not make a whole lot of sense and did not feel realistic. I had to suspend my disbelief on that one and just continue enjoying the rest of the story. And another character did things that I didn't quite understand his motives for, and they weren't really dealt with in a satisfactory way. But that didn't really take away from the awesome cat and mouse rollercoaster this story took me on!
Be warned, each book ends on a cliff hanger, which is why I'd highly recommend buying the set of 3 so you can keep reading until the final word. I absolutely loved the ending!
Read more
Helpful
Report abuse

K. Hughett
5.0 out of 5 stars More like Criminal Minds than 50 Shades of Grey
Reviewed in the United States on January 25, 2016
Verified Purchase
Review of the complete series; 3 books and the epilogue, Forever Bound

Sadie Bonds, is a profiler for the Arlington, VA police department. She is all kinds of messed up due to being kidnapped, raped, and tortured by a serial killer when she was 16. Colton Reed is a rope bondage (shibari) expert who works in his brothers fetish club, The Lair. Sadie visits The Lair to vicariously experience the euphoria and release that the subs of the bondage rigger experience. The Lair is where Sadie and Colton meet.

There is a serial killer on the loose and Sadie is on the case. A secret that Colton Reed and his brother share endangers them all and puts them in the crosshairs of the killer.

Whoever fights monsters should see to it that in the process he does not become a monster. When you gaze long enough into the abyss, the abyss gazes back into you. ~Friedrich Nietzsche
Read more
5 people found this helpful
Helpful
Report abuse

Kate
5.0 out of 5 stars Red
Reviewed in the United States on March 12, 2018
Verified Purchase
"Truth is the most brutal punishment. It forces us to learn who we are."

This complete serial features Sadie Bonds, a behavioral analyst for the State of Virginia, introduced in the Darkly, Madly duet. Kidnapped, held prisoner, and tortured as a teenager, she now works to find the hunters before they capture their prey. To fight off her own demons, she goes to the Voyeur Room at The Lair, where she meets Colton Reed, a Shibari roper who offers to help her. But someone has been watching Sadie while she watches others, someone from her dark past. And as a new serial killer comes to light, Sadie and Colton find themselves trying to identify a killer who has set his sights on Sadie, his woman in red.

This boxed set is the best way to approach the Visions of Red serial, which doesn't end until book three. I found the books to be almost as captivating as the Darkly, Madly duet, which was my introduction to Trisha Wolfe. I'm looking forward to more, beginning with the first book in the second half of the Broken Bonds series, the Ties That Bind, featuring Avery, the medical examiner from this boxed set.
Read more
2 people found this helpful
Helpful
Report abuse

I read through all three of these books in a week and a half.
Read more
Helpful
Report abuse

Avalon
5.0 out of 5 stars Excellent novel!
Reviewed in the United States on December 19, 2015
Verified Purchase
It was only by accident that I found out that books 2 & 3 were published, since I read the first one long ago. This was a complex & beautiful plot. I have to admit I had to go back & read Book 1 because I couldn't remember a thing. I still think this whole plot would've been much better & nail-bitining had it been written in one release. I got a bit confused at some parts in books 2 & 3, but I found myself not caring, & just wanted to find out who the UNSUB is.
Read more
One person found this helpful
Helpful
Report abuse

Book Buddies
5.0 out of 5 stars Mmmm...love me some Colton Reed!
Reviewed in the United States on January 6, 2016
Verified Purchase
I had this on my wish list to read and was thrilled when they bundled it and sold it together. This story was so good I read all three books in two days. I was drawn in right from the start, it was full of surprises and kept me guessing constantly about who the UNSUB could be...I never could have guessed and was very happy the way everything turned out. This was my first read by Trisha Wolfe...now I'm a fan...I'll be looking for more.
My favorite quote: "There's nothing wrong with you, goddess. Just the absolute tragedy that I didn't make you mine first." ~Colton Reed
Read more
One person found this helpful
Helpful
Report abuse
See all reviews

Marcia
5.0 out of 5 stars Awesome!!! Ten stars if I could. A must read.
Reviewed in the United Kingdom on August 10, 2016
Verified Purchase
Awesome!! This has got to be the best book I have read for a long time. The intricacies of the plot and the complexities and depth of the character development is breath-taking. It's Criminal Minds meets Dexter.
Sadie is a criminal profiler with a violent past, making her the person she is today. Colton, a bondage rigger (rope expert) at a BDSM club also has skeletons in his closet. When these two meet, it is fireworks, sexy and hot as hell. He is a protective alpha male and so sinful.
I won't repeat the story as it has been told perfectly by others but I will say, this is a must read. I couldn't put it down and read it in one day.
Well done Trisha.
Read more
Report abuse

DeeDee
5.0 out of 5 stars Fantastic
Reviewed in the United Kingdom on December 19, 2015
Verified Purchase
Wow loved these books, so many twists and turn, several times i thought i knew the killer, then killers, but wow what a fantastic twist at the end, it's a must buy you won't regret it, could not but these books down, short review as i don't want to give anything away.
Read more
Report abuse

A good storyline and very well written and I couldn't put it down! Not to mention the hot sex!!!!
Read more
Report abuse

Kindle Customer
5.0 out of 5 stars Colton and Sadie
Reviewed in the United Kingdom on December 17, 2015
Verified Purchase
Fantastic box set, well worth the read. Full of suspense and what a twist at the end. I had that many guesses at what was going to happen next but Trisha kept me guessing right to the very end. Brilliant
Read more
Report abuse
See all reviews
Back to top
Get to Know Us
Make Money with Us
Amazon Payment Products
Let Us Help You
EnglishChoose a language for shopping. United StatesChoose a country/region for shopping.
© 1996-2021, Amazon.com, Inc. or its affiliates