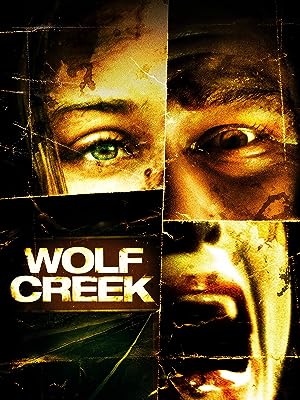 (2,571)
1 h 44 min2005R
Stranded backpackers in remote Australia fall prey to a murderous bushman who offers to fix their car, then takes them captive.

John's Horror CornerReviewed in the United States on August 14, 2019
4.0 out of 5 stars
A brutal Aussie slasher film that is totally mean-spirited, well-villained and shockingly credible.
Verified purchase
Based on a true story (or so says the internet and the DVD cover, I have no idea and wasn’t about to dive down that rabbit hole), this is a truly brutal slasher for fans of credibly cruel, mean-spirited things happening to good people who did nothing wrong and don’t deserve it. That said… loved it.

As we are introduced to our twentysomething protagonists awash with rum shots, bleary-eyed party montages, “who likes who” gossip, and haphazard vacation plans, I’m reminded of The Ruins (2008), Indigenous (2014) and so many other horror films with the same standard “meet the players” opening. Likable and relatable, Liz (Cassandra Magrath; Scare Campaign), Kristy (Kestie Morassi; Darkness Falls) and Ben (Nathan Phillips; Chernobyl Diaries) set out for Wolf Creek deep in the Australian Outback for a camping adventure only to find themselves stranded when their car won’t start.

As luck would have it, a rustic local stumbles across them and offers a tow back to his camp, where he’ll fix their car and put them up for the night. Mick Tayler (John Jarratt; Boar, Rogue, Next of Kin) seems friendly, but an awkwardly backwoods kind of rough. But, far from the nearest town… what choice do they have but to accept his kindness?

Mick is a surprisingly rich character. He explains the history of the outback’s abandoned towns, dust storms, and his work shooting varmints and water buffalo that encroached on farmlands… and all delivered with an off-puttingly Deliverance-ish (1972) sense of humor. Yet such alarming social cues receive no action from our wayward travelers because, once again, what would these three travelers do otherwise?

Never boring us with exposition along the way Wolf Creek takes its time, peppers scenes warning about remote landlocked locals and resource scarcity, and lets us patiently settle into our characters for an hour before any horrors transpire. But once it starts, it’s heavy. Mick is ruthlessly cruel and takes tremendous joy in the torment of his victims as he breaks them down as much psychologically as he does physically. Well beyond his actions, his irrefutable comfort in his own menace inform us that he’s quite seasoned in the pastimes of torturing, raping, flaying and hunting his victims.

With a dismembered torso hanging about, Mick’s décor may momentarily remind you of Wrong Turn (2003) or The Texas Chainsaw Massacre part II (1986). But he’s far more “human” than those inbred hillbilly cannibals—yet every bit as scary. Mick enjoys talking to his victims as he toys with them, lops of fingers with his big knife, and he gleefully severed one’s spinal cord to render her helpless. In retrospect, the “amount” of violence isn’t nearly as high as so many similar movies. But the violence within is sheer brutal soulnessness. And so it leaves a powerful impression. Mick Taylor is an excellent villain.

Written and directed by Greg McLean (Rogue, The Belko Experiment, Wolf Creek 2), this is a film in which the worst possible fate befalls our protagonists and they have done nothing to deserve it. They had no reasonable choice but to accept Mick’s offer to help… and for that, they suffered in this excellent Aussie slasher!

Chris330rReviewed in the United States on February 16, 2021
2.0 out of 5 stars
I was rooting for Mick
Verified purchase
These were 3 of the most inept victims ever that I couldn't wait for psycho Mick to finish them off. One girl has multiple instances where she can kill the attacker for good and then find a way out of that junkyard they were trapped in.
Instead she hits him once in the back while he's passed out and runs away. If these idiotic films taught me anything, it's that when you knock out a potential killer, you use those precious moments to turn his head into a pile of jello to permanently eliminate the threat. But she doesn't.
She has a second time though---this time with a loaded gun at her disposal....but what does she do? She decides to tour his little psycho lair like she's visiting the Smithsonian. She picks up pictures, looks at his clippings on walls, even turns on his psycho video camera to watch some of his previous victims instead of waiting in a safe place for his return to blow his brains out.
What happens to the loaded gun? She hears a noise that startles her to pieces causing her to drop the gun down a hole....so she tries to retrieve it by climbing down the hole, only to see dozens of dead bodies down there which causes her to scream like a scared 9 year old girl and run the hell out without getting the loaded gun she dropped! Who is this STUPID?!
Once Mick got her and turned her into a "head on a stick" I applauded. She was too dumb to live. Her friend was no better. She was told to wait for idiot number one for 5 minutes and then start running. But she just sits there till morning and THEN starts running. Another moron. Mick thankfully put her out of her misery before she reproduced.
Our 3rd idiot was impaled on nails for 2 days before suddenly figuring out he can easily slide right out of them lol. Really, he hung there for 2 days and then 'voila'---light bulb goes off over his head and he slides right out.
And his face is still smooth as a baby's behind once he gets free and still after wandering the desert for another 24 hours, his face is still baby butt smooth lol. How is that possible?!
I enjoyed part 2 better which i watched first because that was free on Prime. I'm sorry I paid for this one because it was really frustrating to see such inept victims...if you can't root for them, what's the point? 2 stars because crazy Mick got 2 of them lol.
4 people found this helpful

Lara Reviewed in the United States on July 8, 2019
2.0 out of 5 stars
Not as good as these reviews claim...
Verified purchase
I know better than to base anything on reviews, but sometimes that's all you have in addition to the trailer when renting movies.

There was some suspense, some gore, great acting, but there wasn't a plot and the movie felt unfinished.

One review pointed out the characters were smart and didn't make typical mistakes that characters in horror movies make. Yet, as soon as two characters escape in the killers truck, they decide to push it off a ditch so they he wouldn't see them. They are in the middle of no where. Then one character has to go back to where they escaped from.

The actress who we first see being attached is insufferable. She's a rock who won't move, and a baby who won't stop crying. I get it, you've been traumatized. But tell me you wouldn't get an adrenaline rush and get moving when you're fighting for your life?!

Again, the plot is poor. It seems like the movie started slow, had 20 minutes of actions, and then it was over with the survivor barely getting any airtime once captured. You don't really see him struggle for his life. You aren't really on the edge of your seat.

Joseph McGuinness (Ray Ray's Records)Reviewed in the United States on October 25, 2019
3.0 out of 5 stars
Worth a watch
Verified purchase
The villain is played really well. I saw another review talk about a sequel and I might check it out just to see more of him. Writing was just ok. Nothing that crazy really happens other than pretty standard horror fare SPOILERS: (kids go out camping in the middle of nowhere, piss off locals, get "helped" by do gooder stranger who of course is bad, find his torture chamber).
END SPOILERS: Other than the villain pretty unremarkable, but he does create quite the character.
One person found this helpful

emmReviewed in the United States on February 19, 2018
5.0 out of 5 stars
Really great portrayal and not formula acting.
Verified purchase
Suspenseful - creditable, and I admire the actors. I'm not a huge horror flick watcher (just binged lately) because this one kept me interested. It's definitely horrifying, but the actors really gave great portrayals and I found myself empathic towards the situations they were placed in. Liking the characters, you find yourself giving advice and routing for them. As another reviewer stated, we all know there are monsters in the world, so how the characters reacted and were convincing. I'd recommend (not for the squeamish, but that's not the concentration of the plot).
4 people found this helpful

MJReviewed in the United States on May 21, 2021
5.0 out of 5 stars
Wolf Creek movies series are one heckuva ride! So buckle up!
Verified purchase
I really loved the movies and the series both to this movie! It’s based on the true story of a serial killer who was very hard to catch, largely to his brilliant madness, and his harsh, and very isolated home in the Outback, which has a special significance to him , which you will learn about in the movie and series. I can tell you it’s very well made and the acting is great! So, it’s NOT some low budget movie. I’m very picky about the horror and suspense movies I do watch and very rarely will I spend money on them but Wolf creek movies and series were well worth the price! I’ll put it to you like this, I watched them well over a year ago and their still with me! So, I hope this will help you all make your decision about renting these, they don’t cost much and there both so worth it!! They keep you on your toes from beginning to end. It’s a crazy ride but once you start watching, you just can’t stop!

Lady SebastianReviewed in the United States on August 27, 2019
5.0 out of 5 stars
Okaaaay!
Verified purchase
In this movie, the killer doesn't say why he does what he does. In the second movie he does. Hey, I didn't know they made this flick into a series. Did I enjoy this movie?, eh, I'm waiting to order Annabelle comes home, when it gets released of course.
One person found this helpful

Prime20Reviewed in the United States on August 25, 2020
5.0 out of 5 stars
Violence, Gore and a Murdering Madman
Verified purchase
Dude, this movie is wonderfully violent. It has a good setup and the series thats now on the Shudder app in the U.S. is awesome as well. I actually feel like the show is better than the movie. You can go wrong with this one.
See all reviews
Back to top
Get to Know Us
Make Money with Us
Amazon Payment Products
Let Us Help You
EnglishChoose a language for shopping. United StatesChoose a country/region for shopping.
© 1996-2022, Amazon.com, Inc. or its affiliates