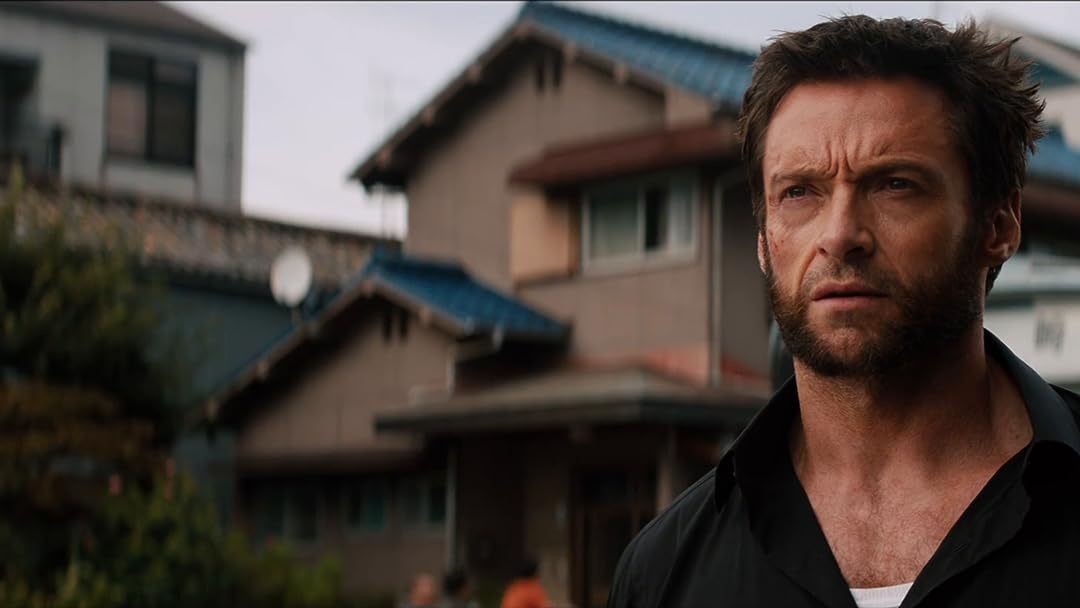 (12,278)
6.72 h 6 min2013X-RayUHDPG-13
Hugh Jackman returns as The Wolverine to face his ultimate nemesis in an action packed battle that takes him to modern day Japan; an epic fight that will change him forever.

azfreediverReviewed in the United States on September 26, 2018
5.0 out of 5 stars
Surprisingly good.
Verified purchase
I was surprised how much I enjoyed this movie. Lots of action, but also a lot of personal development in the characters. All of the cast are excellent. The fight scenes and all of the action is first class. But the story and the delving into the wolverine character, slowly disassembling him and then put him him back together as a slightly different character, Was especially well done. This is done even better in the graphic novel, of course because there is a greater volume of material. But overall they are faithful to each other and if you like one, you will probably like the other.
18 people found this helpful

joel wingReviewed in the United States on June 3, 2019
4.0 out of 5 stars
Great comeback for Wolverine franchise after horrible X-Men Origins Wolverine film
Verified purchase
The 2013 film The Wolverine made up for the absolutely horrible 2009 release X-Men Origins: Wolverine. The Wolverine was loosely based upon the short run 1982 Wolverine comic by Chris Claremont and Frank Miller. It borrowed the characters Logan played by Hugh Jackman, Mariko Yashida played by Tao Okamoto, and the Silver Samurai played by Haruhiko Yamanouchi. Only the most basic ideas however were taken such as the love affair between Logan and Mariko, and the fact that Wolverine and the Silver Samurai fight, otherwise it was an original plot by Mark Bomback and Scott Frank. It centered around a debt between Logan and the Yashida’s that turned out to be a true test for the Wolverine.

Logan’s tangles with the Yashidas takes him across Japan and involves all kinds of great scenes. For example, the funeral of Ichiro gets interrupted by the Japanese mafia, the Yakuza. That leads from the temple where the ceremony is being held into a great scene upon a bullet train. There’s also the intrigue between the different generations of the Yashidas. Ichiro favored Mariko which causes resentment by her father.

There’s a slight lull in the middle when the story focuses upon Logan and Mariko relationship that could have been cut down a bit, but otherwise this is a really great Marvel film with a strong story and nice action.
C

Eric W BaumgartnerReviewed in the United States on December 7, 2020
3.0 out of 5 stars
Not as good as the first one
Verified purchase
Not nearly as good as the first solo Wolverine movie. Jackman is, as always, perfect in the part. I liked the female leads as well, particularly Rila Fukushima as Yukio. Special effects were competent. The music was a bit dull, but it didn't detract from the rest of the film.

Unfortunately, the story, particularly the "twist", was so ham-handedly telegraphed a half hour in you already knew who was doing what and how it would end. So there's no payoff. You get to the end and think "Yep, that's exactly what I thought would happen."

Also, I'm not really sure for whom this movie was made. There's too much blood for children, and not enough character development for adults.
One person found this helpful

David HarveyReviewed in the United States on August 16, 2020
2.0 out of 5 stars
Lack of continuity abounds
Verified purchase
Fair story but be ready for a lot of SJW references by the director James Mangold should you listen to the director commentary. The "extended cut" tauts that you get an extra 12 minutes. My biggest gripe is the lack of continuity. The end credits scene sets up X-Men days of Future Past but wrongly shows Logan with bone claws instead of adamantium claws that Logan starts out with in Days of Future past. This is just one example of the poor attention to detail and it would take too long to list them here. Bottom line, it is a nice chance to see Hugh Jackman and Famke Janssen back in their keynote roles.
One person found this helpful

Ervin GriffinReviewed in the United States on November 7, 2019
4.0 out of 5 stars
Very Underrated!
Verified purchase
I actually got this as a gift so I can't speak on the product itself. I can speak on the film as I actually have this version of the film!

Good story! Corny final battle at the end but not enough for me to give it a thumbs down! Up until Logan, this was probably the truest version of Wolverine and I feel this film was very underrated! Having it in Japan was a good touch as it gives nod to one of his most popular stories from the 1980's in the comics! There is also a post-credit scene which leads into X-Men: Days Of Futures Past! A good buy and a good entry into the X-Men franchise!
One person found this helpful

KReviewed in the United States on April 26, 2020
4.0 out of 5 stars
Wolverine rocks on !
Verified purchase
Bought the three blu-ray disc "Unleashed Extended Edition". This set offers one 3D disc, one standard theater disc and finally one extended version disc. There are plenty of extras that are worth checking out. This movie shows our hero with a loss of his "powers" and how he is thrust into mayhem as usual. He finally rises to the occasion with the help of a few friends and solves his own loss of powers! I would rate this as a solid 7. I felt it had a few weak areas that could have used a little more fleshing out in the story line, yet it manages to keep me engaged enough to make me want to keep it in my collection. Enjoy!! My seller was great in handling an issue that was noticed upon arrival.
One person found this helpful

Michael HicksReviewed in the United States on July 20, 2014
5.0 out of 5 stars
Wolverine At His Finest
Verified purchase
I finally watched the blu-ray of The Wolverine over the weekend, not having seen the film since it's theatrical release a year ago. I kind of forgot just how enjoyable this movie is, and I think the unleashed edition added some good material. While my memory of the original cut is a bit fuzzy, the added scenes of Wolverine's struggle against the Black Clan during the film's climax go a long way toward enhancing that bit. If I recall correctly, the fight was pretty short-lived and somewhat anticlimactic in the original film, but in the Unleashed version Mangold has added some significant material, including Yukio joining in on the fighting.

For me, this is the definitive film version of Wolverine, and it's a great solo film for the titular character. It's certainly far more satisfying than the Origins movie, and here, we have Hugh Jackman at his best. Over the course of multiple X-Men films, he's grown into the role rather comfortably and the character's persona has become second nature to him. From past interviews, I know it was personally important to Jackman to deliver a Wolverine movie for the fans, and this one delivers the goods 100%.
5 people found this helpful

FourLightYearsReviewed in the United States on March 10, 2015
5.0 out of 5 stars
One of Marvel's Best Offerings
Verified purchase
4.5 stars I'd say. This review is long overdue for me. I enjoyed this movie very much, but more than that, I thought it was a great film. Bryan Singer's X-Men films are breathtaking in their spectacle but this film is equally impressive in its meditative quality. Aside from the action sequences, which are great, and a bit of a wild climax, there is a good bit of downtime in this film during which the film explores Wolverine's struggle with his powers, the cost of those powers, and the meaning of immortality. I don't think the films delves into it as intellectually as it might have, but, by filming it the way he has, James Mangold shows us that the film is a least as concerned with being a story about people and legacy as much as it is with being a "superhero" movie. I have always liked the association of Wolverine with Japan in the comics. It seemed very natural, and I'm glad to see that story translated on film. The theme of Wolverine as a Ronin ties in nicely with the problem Logan has of outliving everyone he may fight for (Yoshiga) or care about (Jean). Lovely storytelling.

All in all, I expected this movie to receive better reviews from critics than it did. It's underrated, not just as a Marvel movie, but as a film in general (and Mangold, as usual, continues to be underrated as a director). The movie gets around to one of the seminal events in superhero storytelling--showing us the hero without his powers. The question is, implicitly, is he still a hero? And it allows for an examination of the character's humanity. This was done in Superman II when Superman gives up his powers to be with Lois Lane; it's done in Spider-man 2, wherein we see Peter save a child from a burning building without the benefit of his powers; we saw it in Iron Man 3 when Tony Stark has to improvise an attack without the benefit of his suit; we saw it in The Dark Knight Rises when Bruce Wayne goes broke, and has to see what he's really made of as a man in escaping from the pit. And generally, showing us a superhero without his powers has basically the same effect as planting a fundamental weakness in the hero--eg. Kryptonite for Superman and Water for Bruce Willis's character in Unbreakable. The device works well in The Wolverine as Logan is repeatedly haunted by thoughts of Jean Grey forcing him to wonder if being mortal is really such a bad thing.

As I said, I think this film is underrated, and I would in fact place it in the top five superhero films to come out of the genre since the release of X-Men in 2000. In no particular order, I think the top five of the last 15 years are Batman Begins, Spider-man 2, Unbreakable, The Wolverine, and X-Men: Days of Future Past. However, there are a number of others of surprisingly high quality that they could appear on such a list--Captain America: The Winter Soldier, X2: X-Men United, and X-Men: First Class, to name just a few. I continue to be amazed by the quality of Marvel films, since it seems like studio executives will inevitably screw up a good thing by trying to get too involved, thinking they know best (e.g., Superman III, and, recently, Amazing Spider-Man 2). Finally, this review would not be complete without giving props to Hugh Jackman for giving the role and the character such respect, and not playing the character with a big wink of the eye (like Roger Moore did with his James Bond films), just because it's a fantasy story. Overall, an excellent addition to the Marvel film canon.
See all reviews
Back to top
Get to Know Us
Make Money with Us
Amazon Payment Products
Let Us Help You
EnglishChoose a language for shopping. United StatesChoose a country/region for shopping.
© 1996-2022, Amazon.com, Inc. or its affiliates