You've subscribed to Wolverine: Snikt! (2003)! We will preorder your items within 24 hours of when they become available. When new books are released, we'll charge your default payment method for the lowest price available during the pre-order period.
Update your device or payment method, cancel individual pre-orders or your subscription at
Your Memberships & Subscriptions
There was an error. We were unable to process your subscription due to an error. Please refresh and try again. 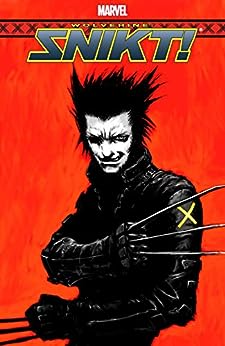 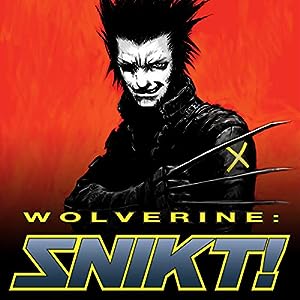 4.3 out of 5 stars
4.3 out of 5
27 global ratings
How are ratings calculated?
To calculate the overall star rating and percentage breakdown by star, we don’t use a simple average. Instead, our system considers things like how recent a review is and if the reviewer bought the item on Amazon. It also analyzes reviews to verify trustworthiness.
Top reviews

DarkWestern
5.0 out of 5 stars Loved it.
Reviewed in the United States on March 15, 2020
Verified Purchase
I read a LOT of the reviews for this before buying it, and I GET why people are rating it down, however, this is just the style of the artist. BLAME! Knights of Sydonia, Biomega, and all the rest are very mysterious. The author enjoys making you wonder and ask questions. Nothing is ever explained in full detail, and I for one really appreciate it. I'm always left with those "good questions" that leave my mind working and theorizing possibilities. The movie Prometheus is a good example of a work that leaves you with "bad questions".
Simply stated, you're going to love this if you ever loved any of the manga titles listed above, and you'll probably safely clump yourself into the group of people that don't get it, or leave a 1 star review if you're just here for another copy/paste super hero wolverine comic.
This is different, massively, and a lot of why I appreciate this is learned from other works by the author. If you're unfamiliar with the author, probably do yourself, and them a favor and skip it.
I couldn't believe how many negative reviews this book has because everyone's complaints were the exact reason I love the book.

Kindle Customer
4.0 out of 5 stars Creative
Reviewed in the United States on June 12, 2021
Verified Purchase
It was fun wish it could of lasted a bit longer maybe a mini series. How would other xmen do in Nihei' worlds or even Spiderman. Now I need to see more of these crossovers maybe something with Biomega or for sure BLAME.
Read more
Helpful
Report abuse

Alexander G. Berg
5.0 out of 5 stars Love it
Reviewed in the United States on October 13, 2013
Verified Purchase
I love the work by Tsutomu Nihei and would recomend this comic to all fans of Blame!, Noise, Biomega or Knights of Sidonia. It is rather more Nihei than Wolverine, so it's not realy for fans of the character/x-men, but since I like both it was not a problem.
Read more
2 people found this helpful
Helpful
Report abuse

Ed. Mireles
3.0 out of 5 stars A little pointless
Reviewed in the United States on December 7, 2012
This book is really fast paced, actually it's so fast paced you don't even have time to enjoy what's going on. It seems like a bad excuse to print a manga style wolverine story. It has no relevance to the character nor the x-men story line. Great art though, I really like the post apocalyptic atmosphere and the pale wolverine look. Other than that feel free to skip this one.
Read more
One person found this helpful
Helpful
Report abuse

GhostFrappe
2.0 out of 5 stars At least the artwork is nice
Reviewed in the United States on July 30, 2014
To be fair, I did like the art, both interior and the cover. But the story was boring and that's why I'm giving it such a low rating. I've only recently begun getting more into comic books and I grabbed some random Wolverine issues from a local store (well, random number ones from various series), with this being among my stack of choices. There wasn't a lot of dialogue, and for being the first issue in this particular series, it felt like it was taking place in the middle of a story and I had missed something important.

Most of the book is Wolverine fighting a bunch of robots in a desert and even then, the battle wasn't epic at all. If you're like me and are just starting out reading more about Wolverine, don't read this book. I don't know, maybe issue two is better, but all I know is I was not impressed with this issue and won't be reading more of the Snikt! books.
Read more
Helpful
Report abuse

mouthteethtongue
4.0 out of 5 stars Beautiful Art - Okay Story
Reviewed in the United States on March 24, 2006
The artwork in this comic book is utterly gorgeous thanks to artist Tsutomu Nihei (creator of the manga series, Blame!). Now, while the artwork is impressive, the story is a bit, shall we say, simple. It's not bad, it's just not very mind-blowing, or deep. In fact is is almost (althought not really) a squashed version of the story in Blame! Still, if you are looking for some great eye-candy, and you love such manga series as, of course, Blame!, Ghost in the Shell and/or Battle Angel Alita, be sure to pick this up.
Read more
6 people found this helpful
Helpful
Report abuse

Cory Daugherty
4.0 out of 5 stars Cyber punk and Marvel cross over?
Reviewed in the United States on July 17, 2007
This book was done by renowned manga artist Tsutomu Mihei, and he has delivered an excellent and beautiful piece in his own twisted style. True, the story is thin and there is very little text to read, and yes Wolverine is portrayed as lanky- but if you're a fan of BLAME! or Tsutomu's other work, Noise, Or you just enjoy dark stylized artwork- you'll love this book as much as I.
Read more
5 people found this helpful
Helpful
Report abuse
See all reviews

Mr. J. WARE
5.0 out of 5 stars The Future Is Dark
Reviewed in the United Kingdom on February 3, 2005
Verified Purchase
This is essential for any Wolvie fan.
The artwork is wild, dark and stylish. Just check out Wolverine's red eyes! It gives him a dangerous factor that is missing in some of his other stories. He is wild, remember, not tame. It suits the artwork, and is a more violent version of the character than we have seen for a while.
The speech in this story is minimalist, and while the storyline is short, you need to relish the artwork.
It's a thumping ride of a book, taking Wolvie into the future to help save mankind. The enemy is slightly vague in this story, which is a shame, but it doesn't stop Wolverine duking it out big time.
I couldn't put it down, and even now sneak a look into to gaze at the artwork.
SNIKT!
Read more
3 people found this helpful
Report abuse

Atticus Prime
3.0 out of 5 stars Blame! - I mean Snikt! review - mostly style and no substance
Reviewed in Canada on September 19, 2017
Verified Purchase
I'm a Tsutomu Nihei fan and liked his rendition of Wolverine, but be warned that the plot and dialogue here is pretty thin and generic. The story lacked any kind of twist or punch and pretty much zero character development. Wolverine gets kidnapped and brought to save the future and fights generic sci-fi zombie monsters with no actual memorable 'bad guy' characters. Wolverine and the supporting cast hardly get any development. I would have liked some twist, like perhaps the masked Colonel character revealed as another character from Wolverine's past, or perhaps the people of the future actually wanted Wolvie to harvest his adamantium to make weapons - I thought that was where the story was going, but nope, they just wanted him to help slash up the the army of rapidly mutating monsters. You will also witness Wolverine, while weighted with his adamantium bones, stylishly jump and leap 20-30 feet through the air like Spider-Man and cut giant monsters in half.

I paid a pretty penny for this book and can say it has definitely been over hyped and one of this creator's weaker works. It is in full colour, but I wonder if the book would have benefited more as black and white. Your money is probably better spent on the manga Blame! or Knights of Sidonia, or if you want a good Wolverine story, check out Old Man Logan or Claremont & Miller's classic Wolverine. Three stars for the art alone, otherwise, this could even have been a one star affair.
Read more
Report abuse

Andrew Frame
5.0 out of 5 stars Best wolverine Ever!!!!!
Reviewed in Canada on May 24, 2017
Verified Purchase
The art is fantastic,that's the number one reason to have this comic, the story itself is compelling,I know it's been done a lot but who cares, it's still great,I which it had been longer,show more of the devastated Earth, more of Logan fighting the mandate.
Read more
Report abuse