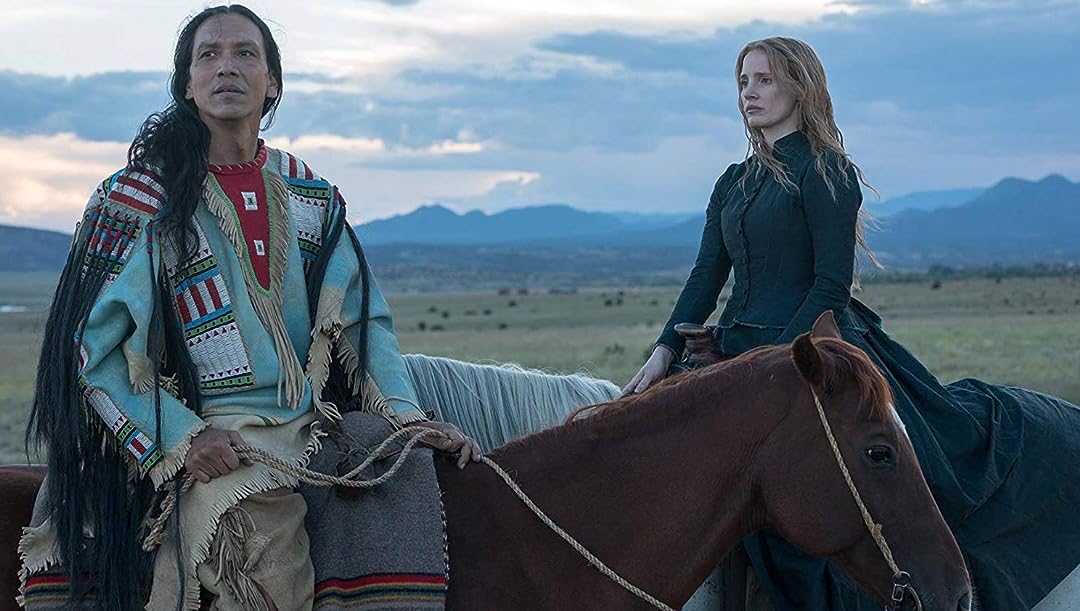 Silver Screen VideosReviewed in the United States on September 7, 2018
3.0 out of 5 stars
Movie Walks Behind a Bit
Verified purchase
Jessica Chastain may be one of the best actresses around at playing strong, assertive women, as she has demonstrated in films from “Zero Dark Thirty” to “Molly’s Game.” And Sam Rockwell is terrific at playing bigots, as he demonstrated in winning an Oscar last year. Put them together in roles that are right in their wheelhouses, and the results should have been electrifying. Unfortunately, “Woman Walks Ahead,” although an earnest look at an actual historical incident, proves to be less than the sum of its parts.

The movie is based on a portion of the life of Caroline Weldon, an Indian-rights activist and artist who painted some well-known portraits of Sitting Bull at his home at the Standing Rock Reservation in South Dakota. The events surrounding the paintings led to the infamous massacre at Wounded Knee, and “Woman Walks Ahead” will give modern-day audiences a better, albeit somewhat inaccurate, understanding of what went on. In the movie, the widowed and rather naïve Weldon (who was actually a divorcee with a son in real life) decides to go to South Dakota to make something of herself. She finds that the Indians are being pressured to sign a treaty giving up much of their reservation land and that the government is cutting their rations to persuade them to sign. An angry Weldon throws her lot in with the Indians and tries to persuade Sitting Bull, who is content to live out his days on his small farm, to side with her.

Chastain is quite good as Weldon, as might be expected, and Michael Greyeyes brings surprising power and dignity to the role of Sitting Bull. He is gradually and somewhat grudgingly drawn into the dispute, but when he finally takes a stand and gives a speech recommending that his fellow tribe members reject the treaty, it is the most powerful scene in the movie.

If director Susanna White had been content to stick with the actual events, “Woman Walks Ahead” could have been a powerful drama. Unfortunately, she apparently didn’t believe in the strength of this material and tacks on an invented and highly clichéd, almost love affair between Weldon and Sitting Bull to juice up the story. In real life, the two had a parting of the ways stemming from their disagreement over the best course of action (Weldon was an Indian rights activist before she went west), and she was already back east when the climactic events in the movie occurred. Here, however, the pair engage in one of those we’re-attracted-to-each-other-but-we-know-there-is-no-future-so-we-do-the-noble-thing affairs, accompanied by longing glances and wistful sighs. This platonic affair never quite rings true.

Another discordant note in “Woman Walks Ahead” is the character of Colonel Grove, played by Rockwell. He is originally introduced as a rabid Indian hater (reminding Weldon that many of the soldiers in the territory lost friends at the Little Big Horn). But he gradually mellows a bit, not so much because his character gains a greater understanding of the Indian point of view, but because the plot demands that he act in a particular way to advance the story.

Since many people are quite unfamiliar with the entire story that led to the massacre at Wounded Knee (not shown in the movie), “Woman Walks Ahead” is an eye-opener in that regard, and the performances of Chastain and Greyeyes are solid, leading to some genuinely emotional moments. But the story of Weldon and Sitting Bull deserved better treatment than it receives here. I still recommend the movie, but it walks behind just a bit too much.

SMHJRReviewed in the United States on September 15, 2018
1.0 out of 5 stars
Twisted History - MANY UNTRUE POINTS IN MOVIE
Verified purchase
Although, it was a good film, it was sold based on a "true story". Nevertheless, there are so many facts twisted in this drama that is hard to believe if much of the film is true. The woman in the story was NOT a widow - divorcee, son from another while married and then she actually dragged the kid to meet Sitting Bull (with no invitation). Prior to death, Sitting Bull was no longer heavily associated with woman (or her son). Sitting Bull was NOT killed by a sniper (as portrayed) - he was killed during an arrest by an Indian agent. Do not promote a story as "based on true facts" with so many screwed up facts. Heck even the portrait that they showed that was supposedly painted by this woman was not even close the real thing and then the audacity of the ending credits to make you believe it hangs in some museum now - perhaps the real portrait - but not the make believe that the movie wants to depict.
125 people found this helpful

LGHReviewed in the United States on July 9, 2018
5.0 out of 5 stars
Great Story!
Verified purchase
A good film...a very good story, even though I suspect the history gets a Hollywood make over, as do the characters involved. Sitting Bull was never as pretty as Michael Grey Eyes. It is however, beautifully shot, well acted, and drives home the eternal American dilemma of how Native Americans have been treated in this country...not to mention what happens to those Anglos who actually had sympathy for them. It's an impossible story to tell without someone getting offended, but this film does a pretty good job of it. As are all stories of Native Americans...the end is heartbreaking...at least in my humble opinion, but I love a good period piece, and this one serves the genre well. This women's story is worth your time, and Jessica Chastain embodies her spirit. Happy trails!
146 people found this helpful

Iowa ConsumerReviewed in the United States on July 15, 2018
5.0 out of 5 stars
Satisfying on many levels and highly recommended
Verified purchase
Very well acted. The movie kept my attention throughout. Beautiful cinematography. The story line deviates a bit from historical facts, but it is close enough to the actual events that it provides the audience with an important understanding regarding how the Lakota Sioux were cheated, robbed and brutalized by the US government. The movie gives insight into the last days of Chief Sitting Bull and it serves to introduce Caroline Weldon, a widowed white woman who travels to paint a portrait of Chief Sitting Bull and to lobby in support of the rights of the Lakota people. The story weaves a beautiful portrayal of Sitting Bull and Caroline Weldon's relationship. Caroline's end was not as depicted in the movie .Although, the artistic license taken by the director provided a profound statement. This is a movie that is satisfying on many levels and is one that I would highly recommend.
75 people found this helpful

SkyeReviewed in the United States on August 26, 2018
5.0 out of 5 stars
The loss of true Freedom
Verified purchase
Sad factual portrayal of part of the systematic genocide of Native American people and the stealing of their land. Sitting Bull and the female painter form an extraordinary bond. This is realistic and well-acted movie. What this movie is really about is the loss of True Freedom on this Earth.
54 people found this helpful

CharReviewed in the United States on July 2, 2018
5.0 out of 5 stars
Beautifully filmed and well acted
Verified purchase
Great movie. Beautifully filmed, well acted. Very sad true story. Another movie demonstrating how cruel human beings have been to one another throughout history.
35 people found this helpful

SabellicusReviewed in the United States on September 5, 2018
5.0 out of 5 stars
Dancing Rico gave me goose bumps...
Verified purchase
This was a very well made film and nicely told story about the most controversial part of the American history: The genocide of the Native Americans. And of course there are voices claiming again (and again) that this story is only loosely based on facts. That "these people", Natives and Hollywood, have an obscure view on history. Alas! I am sorry, that people that were chased, hunted, poisoned, infected with lethal diseases and driven from their homeland weren't able to keep correct records. Such a pity that they misses to establised some fine archives for the later born. Just went to the National Museum of the American Indian in NY, and it's a shame how few artifacts and little collections made it to the 21th century. European collections are much bigger. Even in the small town of Radebeul in Saxony. It's a disgrace.
Nevertheless this is a good movie. Okay, sometimes a little too romantically told. But even that is okay. When you see the leading actress the first time, you will know what's ahead of you.
17 people found this helpful
See all reviews
Back to top
Get to Know Us
Make Money with Us
Amazon Payment Products
Let Us Help You
EnglishChoose a language for shopping. United StatesChoose a country/region for shopping.
© 1996-2022, Amazon.com, Inc. or its affiliates