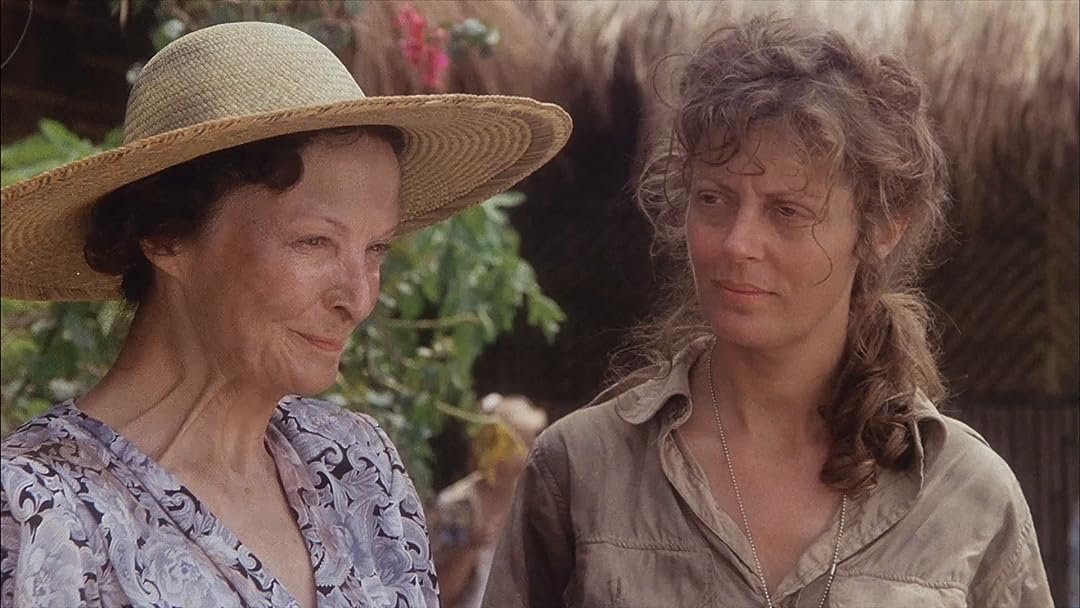 (62)
1 h 35 min1986X-Ray16+
Susan Sarandon and Kristy McNichol star in this powerful drama sent during World War II, when a group of U.S. Army nurses in the Philippines are captured and imprisoned by Japanese troops.

Stefan TeodorescuReviewed in the United States on October 25, 2020
5.0 out of 5 stars
Lesson in history
Verified purchase
Very few movies covering the WWII Nurses core were ever made. This is one of the greatest ! Acting is close to perfection and if you are willing to watch "an oldie" you will be in for a treat. This movie covers history, bravery, courage, faith, HONOR, dedication, friendship and the list goes on and on... It shows the real challenges people on both side of the front had and how they overcame tragic situations, how they coped with life even when ther was nothing to look forward to... GREAT MOVIE !!!!!
6 people found this helpful

R.L.Reviewed in the United States on July 15, 2021
4.0 out of 5 stars
Well-deserved, but somewhat Hollywood-ized.
Verified purchase
This is a story about the brave Army and Navy nurses who served in the Pacific in WWII, and those who were taken prisoner in the fall of Bataan and Corregidor. I used to know one of those Navy nurses who served in the Pacific, and you can't say enough about their bravery and dedication to the men who were wounded in battle. They did whatever they could to comfort those soldiers.

As for the story line, there were 77 nurses who were evacuated from Bataan to Corregidor, and subsequently taken prisoner and moved to Santo Tomas internment camp, where they worked in the hospital there. All survived the war. In interviews, they stated they suffered from malnutrition during imprisonment, and were not raped.

The story line says four nurses participated in the Bataan Death March. I cannot find any historical evidence of that. All were evacuated to Corregidor before subsequently taken prisoner when Corregidor fell.

There is a reference to General MacArthur ordering planes to be grounded while the Japanese bombed the airfields in the Philippines, and eliminated the Army Air Force in the Pacific. This was controversial. MacArthur said he was acting as the Commanding General of the Philippine Army, which had not yet declared war on the Japanese. He was also Commander of US Forces, and did not act on their behalf. His reasoning is still shrouded in mystery. He was also criticized by some in the film for deserting his army in Corregidor and escaping to Australia, but that was more justified to avoid capture of an important leader.

Amazon CustomerReviewed in the United States on July 17, 2021
1.0 out of 5 stars
Terrible!
Verified purchase
This is Hollywood nonsense! The Japanese military were barbaric!!! They had no compassion for anyone! Research "The Nanjing Massacre" and war crimes against Korean civilians!!! They murdered babies and raped young girls as well! Disgusting people!
7 people found this helpful

Toby T.Reviewed in the United States on May 13, 2021
5.0 out of 5 stars
Would Watch Again
Verified purchase
The movie was an excellent show of history even if the story was fiction. Those who serve in any capacity and good through the things that these women went through should be honored regardless of their role was combat or non-combat. I also loved that it was not a movie that entirely revolved around one person, but instead a group of people...even if there was a "starring" role per se.

Like a few other older military movies I watched, it also shows that most people who are soldiers are not killing machines or bad people regardless of which side of the war they are on.

You will see the one Japanese soldier who almost did not even act like a soldier. He was genuinely kind and even got flak for it. The commander himself was struggling with his dual identity while also showing his honor as you would expect from an imperial Japanese Officer. Even the pig of a Japanese soldier was ready to enact his bushido code.

The combat was minimal and the effects were terrible, but considering when the film was made that's no big deal. I would definitely recommend this movie for anyone who likes history, likes the military, and is interested in learning about the less "Rambo" side of the military.

On an unrelated note I was totally rooting for Nolan the whole time. Tom boy, smart-alec, and not afraid to scrap. My kinda girl lol
2 people found this helpful

will crowReviewed in the United States on July 31, 2021
2.0 out of 5 stars
1975? or 1942?
Verified purchase
Kristy Mcnichol drops in from 1979 give or take a year, to give a mediocre performance as a t-shirt wearing, tough biker chick complete with a Shag haircut, tight acid-wash, Levi's jeans and combat boots. You half expect her to start snapping her gum and whining about not going to the mall on Saturday. None of them has committed to the hairstyles or dress codes of the times and the dialogue is from the 1970's as well.
It's an impossible script with too many references that simply couldn't be made at the time and all of their conversation seems to presage the events and how they will be perceived from 40 years later.
One person found this helpful

Debbie S. ScottReviewed in the United States on September 25, 2021
5.0 out of 5 stars
Incredible
Verified purchase
This movie shows you some of what actually happened to women and men back then and how we as people can survive tragedy and enjoy life and not take it for granted
One person found this helpful

Amazon CustomerReviewed in the United States on August 19, 2021
1.0 out of 5 stars
Just couldn't
Verified purchase
I am a total ww2 history addict. But we know the Japanese brutal enough to stop watching It was a joke to what actually went on.
One person found this helpful

DerSchuhmacherReviewed in the United States on June 3, 2022
5.0 out of 5 stars
Good movie
Verified purchase
Those women did go through a lot back in the day. Just makes me wish I could rewatch Tenko, which was a great series!!!
See all reviews
Back to top
Get to Know Us
Make Money with Us
Amazon Payment Products
Let Us Help You
EnglishChoose a language for shopping. United StatesChoose a country/region for shopping.
© 1996-2022, Amazon.com, Inc. or its affiliates