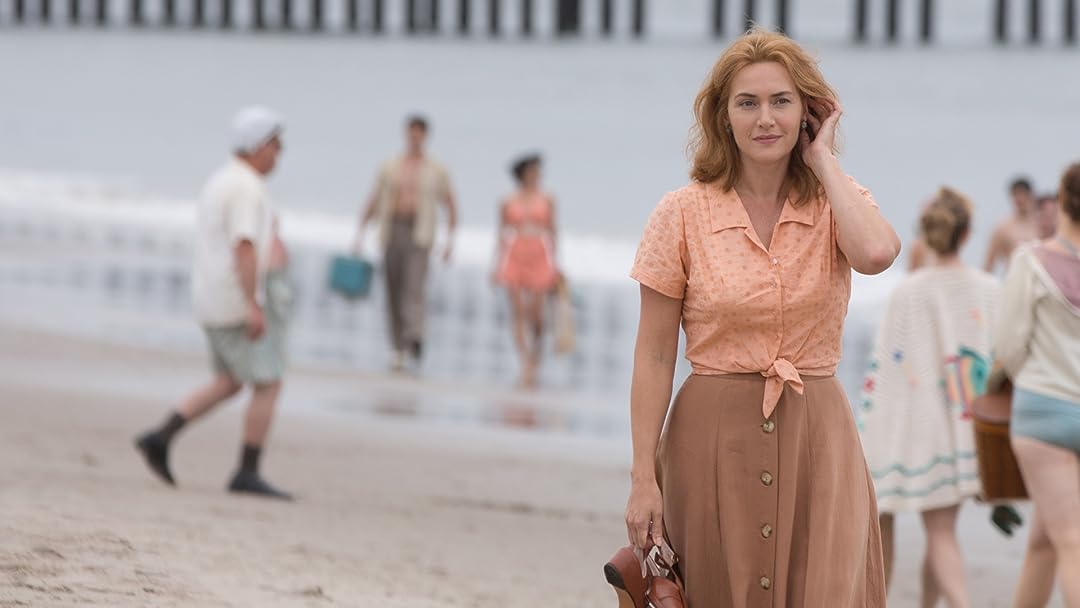 (1,035)6.21 h 40 min2018X-RayUHDPG-13
WONDER WHEEL tells the story of four characters whose lives intertwine amid the hustle and bustle of the Coney Island amusement park in the 1950s.

AnonymiceReviewed in the United States on September 14, 2018
1.0 out of 5 stars
Rehashed Woody and the playwrights he loves
Verified purchase
I have to admit to being a, well, former, WA fan, in spite of his self-idealization (Justin Timberlake? really?), depictions of women, and his obsession with young girls, which is reflected in his movies and actresses. But he's been past his prime for a while now. His movies seem phoned in, in both direction and script. He rewrites and recycles his movies, it seems, just to keep going. Why he doesn't retire and tour his amateur clarinet? Since his breakup with Mia Farrow, it seems he writes his women as a message to Farrow, as rationalization for his behavior, which is very cringeworthy, esp as he has rarely owned up to any of his sins, but thinks others should pay for their imagined (by him) ones. All reflected in his scripts, and this one is no exception.

Juno has the best performance here, among the main actors. Belushi is tiresome and obvious channeling John Goodman channeling Jackie Gleason. Winslet is a shadow of her Oscar-winning self, through no fault of her own. She does herself no favors by being in WA movies. She seems constrained in them, as if WA finds her essential talent and then robs her of it.

The style of this film is quintessential WA, aided by the masterful cinematographer Vittorio Storaro, who, unlike Allen, is definitely not past his prime. The lighting is original and modern, while at the same time reflects the vintage setting and sets. The actors are beautifully lit, which makes their direction all the more tragic, as most performances do not match Storaro's framing. Their depiction of Coney Island is not meant to be realistic, so don't go looking to find scenes from your childhood here.

This is one boring work of film and does Allen no favors. It will do you no favors, either, as you'll never get the time back. If you are a loyal WA fan, or have loved his movies of the past decade, you might like this. If not, then steer clear of this one.

Betsy L.Reviewed in the United States on July 22, 2018
2.0 out of 5 stars
Not for me.
Verified purchase
Oh boy. I watched it all the way through hoping, just hoping it would get better, but..I guess it was just not for me. Having grown up in Brooklyn and Coney Island having been an important part of my childhood, I was looking forward to this. Not good at all. Cheesy lines, everything about it just felt like I was watching a bad theater play. I really like the all star cast, well I normally like every one of them. Honestly I don't understand what lured them to this project though. It just didn't make any sense to me. Mostly the ending..it went in a very strange direction. Lots of cringe worthy moments. I was left with the feeling of what's the point? Seriously, can someone please tell me what was the point of this movie and why did I let it waste my precious time? One positive, it was visually appealing with the lighting.
67 people found this helpful

VelmanatorReviewed in the United States on August 12, 2018
1.0 out of 5 stars
Don't waste your time
Verified purchase
I didn't know this was a Woody Allen flick until I read the reviews. I AM a fan of JT, June & Kate W, which is why I watched it in the first place. Had I known beforehand that Woody Allen was involved, I would NOT have bothered even slightly. I am not a fan. Then i was just curious to see if others thought it was as horrible as I did, and it turns out they do!

It was a bunch of weird scenes with bad clothing and, overtalking, a lot of screaming and over acting and monologues that went on far too long (especially from Kate W.).

This was awful. Don't waste your time.
53 people found this helpful

VIDFANReviewed in the United States on June 2, 2018
3.0 out of 5 stars
Another "Crazy Lady" Woody Allen Movie
Verified purchase
This is another "Crazy Lady" movie that Woody Allen seems so fond of making these days (very similar to "Blue Jasmine" with Cate Blanchett). Once again we have an aging beauty at the end of her rope, desperate to hold onto her looks, conscious of being broke and, in this case, devastated at being passed over for her younger stepdaughter. There's something quietly sadistic in the way Woody Allen depicts these "desperate women" whom the viewer is invited to gawk at as if they're carnival freaks. Kate Winslet's character, Ginny, is a bitter character who has no aspirations in life other than to have sex with a wannabe writer/lifeguard (played by Justin Timberlake) and spout shallow musings about life. Predictably, she is betrayed.

I gave the film three stars because it's never boring, in the way "The Young and the Restless" and other soap operas were never boring. The dialogue is so bad at times that it's actually funny and that also keeps you entertained. Jim Belushi is a blue-collar stereotype who yells "Christ!" a lot and the gangsters seem ripped out of a 1940s Warner Brothers movie. Ginny and Humpty were both so narcissistic and self-dramatizing that they sounded like a drama queen's Facebook posts.

When Allen was younger, his view of women apparently was more charitable and so a neurotic female character was portrayed as charmingly "quirky" (like Annie Hall) rather than crazy. Now, after Mia Farrow, it seems any woman who dares express rage toward a man who rejects her in favor of a younger woman (understandably) automatically gets portrayed as "crazy".

In short, nothing original here, just a very simple love triangle that, if a woman had made it, would be written off as pure soap opera. But since Woody Allen made it, it gets compared to "Streetcar Named Desire" and other male-authored tragedies that supposedly sympathize with weak women, but often ends up subliminally celebrating their distress.
304 people found this helpful

Isis McReviewed in the United States on September 13, 2018
5.0 out of 5 stars
W. Allen does it again
Verified purchase
NOTE: Potential viewers, if you do not know who Woody Allen is and about, do not watch this movie if you can't watch it with an open mind.
Another flick about a neurotic and hysterical drama that belongs more in the therapy room than a long motion picture. However, that is what Allen has been giving us for more than four decades. From plain and silly humor to over dramatized relationships among humans that most of us do not recognize but exist. Bananas, Take The Money and Run, Love and Death and the histrionics that most people are familiar with a unique writing and directing that makes millions of people to spend their dollars at movie theaters around the globe. So there must be something good about his films, right?
Frankly, I am surprisingly pleased with this Wonder Wheel. I loved the three characters, living deep into their world and attempting to connect with others. Do they?
So many scenes are fantastic performances of beloved & achieved actors. Timberlake truly surprised me. He fitted the character and carried all the way through. Winslet delivers an expected significant performance, and Belushi does not stay behind. As a previous writer stated here, photography is probably one the best of all Allen's films.
Special effects are carried out perfectly, and as usual, Allen managed to deliver most of the movie in the confinement of the studio or in an indoor location. I recommend this film to most viewers, except those that expect to find something resonant to most of the contemporary Hollywood dramas. Film lovers may appreciate this new film but will not get confused with the achievements of directors such as Kubrick, Scorsese, Lynch, Bergman, Burton, Cohen, Spielberg, Truffaut, Polanski, Fellini, and more. However, they will recognize Allen as an influential and great director like all of them.
23 people found this helpful

AnonnymouseReviewed in the United States on January 23, 2019
5.0 out of 5 stars
Wonderful!
Verified purchase
Very well acted and I think the cast was perfectly selected. The camera work made this movie. It was beautiful. Since I grew up in the 1950's and 1960's, I have a sense of the culture at that time and I will try to share what I know.

Self centered Ginny, played by Kate Winslet, despises her miserable existence to the point of underlying panic. She lives on a boardwalk above a noisy carnival. She can barely stand the noise or her second husband nicknamed, "Humpty". He is a carnival worker played by Jim Belushi. She also has a young future juvenile delinquent son who lights fires all over the neighborhood.

Jenny is divorced due to her infidelity in her first marriage. In the 1950's a poor uneducated divorced woman with a kid was at the bottom of the barrel. Miserable or not, Ginny was lucky to have Humpty. A single woman didn't make as much money as a man. And a divorced woman might be pawed over by some men like she was a prostitute. Society thought it cute if she slapped such a man. Nobody knew what sexual harassment was back then. And nobody understood obsessive love or mental illness either. So it makes sense Justin Timberlake's character Mickey did not detect it when got tangled up with Ginny.

The story is good. I liked the setting and how it relates to the desperation of the characters. The acting is superb. Kate and Justin shone in their roles as did everybody else.
15 people found this helpful

Matthew A. WatsonReviewed in the United States on August 2, 2018
5.0 out of 5 stars
Inspired by Eugene O'Neill, an in-depth character study
Verified purchase
Like most of Woody Allen's work, this film provides an in-depth character study -- this time of Ginny, Kate Winslet's unhappy aging wife and mother. Allen was very much inspired by the drama of Eugene O'Neill (whom his characters mention several times in the film) for this film. The result is a very dark examination of humanity's fatal flaws. An excellent film.
22 people found this helpful

Amazon CustomerReviewed in the United States on December 24, 2018
5.0 out of 5 stars
Fantastic!!!
Verified purchase
I watch movies to be entertained and I love a movie that makes me stop what I'm doing and just watch and listen. Nothing about this movie disappointed me. There is swearing and I'm not big on swearing but it was easy to overlook. The acting was amazing. The actors worked hard on their characters. The cinematography was beautiful and colorful. The actors looked vibrant. I want each of the actors to get awards and for this picture to get an award! I've seen Kate Winslet in a few more movies lately and she is another Meryl Streep! Definitely a 5 star movie. Woody Allen is extremely talented!
14 people found this helpful
See all reviews
Back to top
Get to Know Us
Make Money with Us
Amazon Payment Products
Let Us Help You
EnglishChoose a language for shopping. United StatesChoose a country/region for shopping.
© 1996-2021, Amazon.com, Inc. or its affiliates