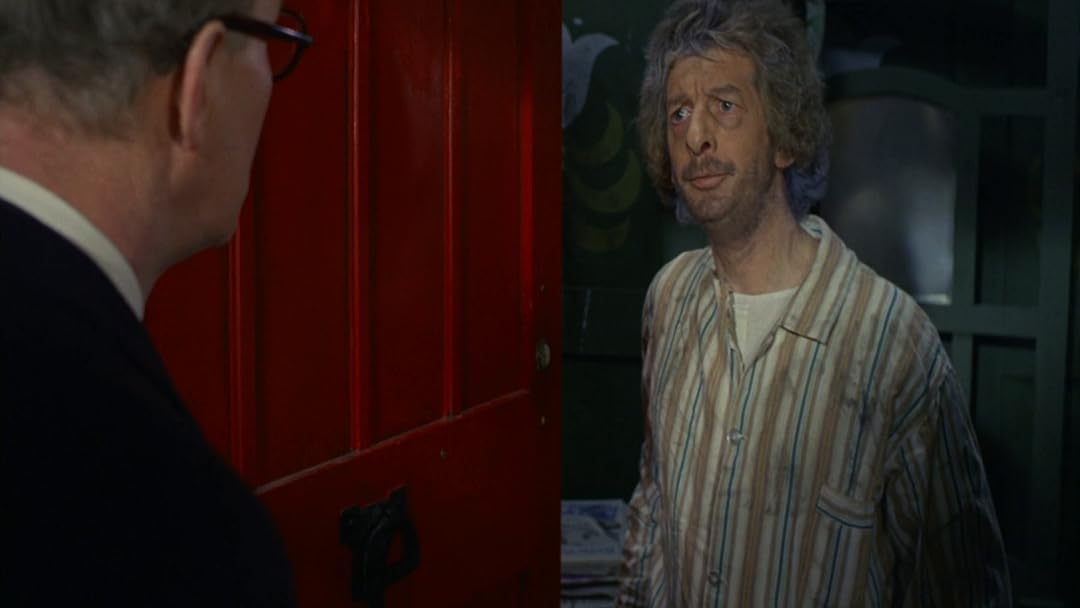 (79)
5.71 h 14 min196918+
The eccentric professor Collins lives completely secluded in his chaotic apartment. When the model Penny moves in next to him, he becomes fascinated of her. He drills holes in her walls and ceiling and peeps on her day and night. He loses himself in daydreams and delusions.

The Tally HoReviewed in the United States on June 20, 2020
4.0 out of 5 stars
Review without Spoilers - Pros & Cons
Verified purchase
Wonderwall (1968) is a British psychedelic film directed by Joe Massot that stars Jane Birkin, Jack MacGowran, & Iain Quarrier. The soundtrack was composed by George Harrison of the Beatles. Here are the pros & cons of this film as I see it, I hope this helps you, and remember to check to make sure it is in a format & region that will work with your player.
Pros:
1. I personally enjoy the psychedelic feel of the film, use of colour, & costumes
2. Interesting cinematography
3. Music by George Harrison was enjoyable
4. Nice that it has the cinema & directors versions both on the disc to choose from
Cons:
1. The story and script are lacking

Aparato PopReviewed in the United States on October 15, 2020
2.0 out of 5 stars
Not as good as the soundtrack album would lead you to think.
Verified purchase
I owned this movie at one time but sold it after watching it a couple of times. It’s a weak plot in which a scientist discovers a loose brick in a wall in his apartment separating his neighbors’ who happens to be Jane Birkin who has a phoney hippie boyfriend. He enjoys peeping through the hole as he admires her beauty. Harrison’s cue music is of a different mix or take than what you hear on the album, however it is not as good and May be of interest to fans of the Beatle. It’s a dated film, worth the time to watch just to get it off your bucket list of curiosity. Don’t expect anything deep. There is nothing Indian here except for some of the music which doesn’t fit the film, but nevertheless, it was a chance for George Harrison to branch out of the Beatles. There’s also an unused track performed by some other group not used in the film and a short film showing people , many of them young, walking the streets of London. Interesting, but not something you should pay more than $10 for. The cover of the George Harrison album suggests a more interesting premise than the film delivers.
One person found this helpful

BequetteReviewed in the United States on June 17, 2019
3.0 out of 5 stars
A must watch for Beatles fans.
Verified purchase
This quirky film is worth a watch if for no other reason than its score was composed by George Harrison while he was still in the Beatles!
2 people found this helpful

Music-fanReviewed in the United States on December 2, 2020
1.0 out of 5 stars
Maybe the worst movie ever made...
Verified purchase
This BOREFEST pretty much upholds the age old mentality that the British are horrible movie makers. There are a few interesting bits of Carnaby-era music, but not even the George Harrison scored soundtrack, itself a fairly lackluster affair, could save it. Don’t say you haven’t been warned...
2 people found this helpful

ANTHONYReviewed in the United States on June 5, 2014
3.0 out of 5 stars
Great late 60's period piece
Verified purchase
I have had the George Harrison soundtrack to this movie for over 40 years. i had never seen the movie. If you want to get a feel about what it was like in the late 60's this is a fun look with some interesting music by George Harrison. Not much of a plot or story. If you are looking for some great acting don't bother. It is a pleasant quirky little piece about the late 60's. No more no less. Very colorful!
10 people found this helpful

ReaderReviewed in the United States on March 14, 2001
4.0 out of 5 stars
60s waif-zeitgiest heaven
Verified purchase
Wonderwall
I purchased Wonderwall and Rear Window on the same day. When I got them I realized they were both movies about looking, about interiority and desire. Rear Window is, of course, one of the greatest work of cinema art. On the other hand, Wonderwall (thankfully made available by Rhino video) is in an altogether different category. How to categorise it? Pulp, low art, pop, guilty-pleasure, who can say? For me it was a moving and beautiful film in its own way, a slice of the 60s zeitgiest, (so different form the mini-series versions of recent years) a chance to feel the real possibilties floating in the culture before nihilism, fundamentalism and greed became fashionable. George Harrison's music is terrific. There's even a poem by John Lennon on the DVD extras. The colors and art in the film are also period: they hearken to the psychedelic work of Peter Max, the posters for groups like Jefferson Airplane and the Grateful Dead. But, most of all, one can glimpse the 60s version of the beautiful in the form of Jane Birken, who plays a fashion model. Each age has its concept of beauty, as the film points out by movie posters of earlier screen sirens on the apartment walls, and Jane Birken really captured the original free spirit waif long before Kate Moss revived it. Birken really shares her perky charms in this movie, her cat like playfulness. True, she may not be a feminist ideal, you may not compare Nietzsche to Camus with her, but then would you want Ally McBeal for a lawyer? Movies from this period are hard to find so lets hope Rhino and Criterion continue there good work of porting this time to DVD. Don't miss Jane Birken's other nimble foray onto DVD in May Morning.
17 people found this helpful

Mikem226Reviewed in the United States on May 11, 2019
5.0 out of 5 stars
More than psychedelic fluff
Verified purchase
A compelling artifact of the mid sixties- prefer the directors cut , informative booklet enclosed
One person found this helpful
See all reviews
Back to top
Get to Know Us
Make Money with Us
Amazon Payment Products
Let Us Help You
EnglishChoose a language for shopping. United StatesChoose a country/region for shopping.
© 1996-2021, Amazon.com, Inc. or its affiliates