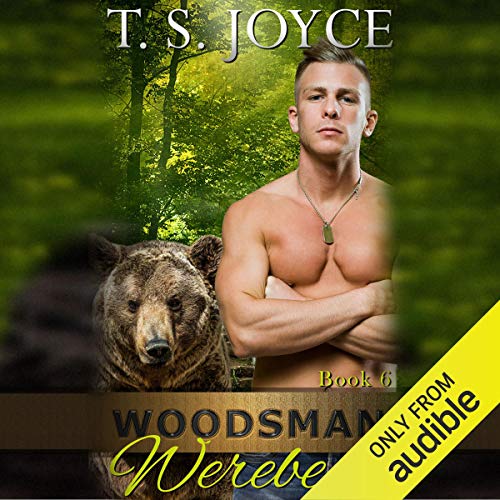 Riley Miller is on the run. In an effort to do something nice, she lands right in the middle of danger. A trek to the wilderness will put her under Damon Daye's protection, but it'll also dump her in the direct path of one sexy, snarly lumberjack werebear, Drew. His interest is stirring up feelings she's forgotten exist, but she can't get too attached to him. She has two weeks to spend in the mountains, and after that, she must leave to reclaim her life back in the city. But the Ashe Crew isn't making it easy on her. Here, she could find the life she's been looking for if only her demons would stay in her past.

Drew Hudson is losing his mind. Coming off a devastating loss, he's doing anything he can think of to keep his inner bear from going stark raving mad, including risky stunts that threaten to expose the Ashe Crew as bear shifters. When a chance encounter with a sexy hitchhiker settles his animal side, he can't help but wonder about all the secrets Riley Miller is keeping. But when her past unravels little by little, he'll have to take control of his animal in order to protect her.

And if he can allow this selfless, mind-consuming, tough-as-nails human to soften his heart, he just might find himself again.

Your audiobook is waiting!
Learn more about membership
List Price: $14.95
You Save: $1.87 (13%)
By completing your purchase, you agree to Audible’s Conditions Of Use
Sold and delivered by Audible, an Amazon company

Why
4.0 out of 5 stars I really loved it ❣️
Reviewed in the United States on June 30, 2020
Verified Purchase
I really loved it❣️
But I needed more .
Everything just flowed by too fast.
On one hand I would have loved this to have been more of a “medium burn” at the very least. But Riley and Drew just felt soo natural together. Some couples may fall together so easily and quickly it ends up feeling false or wrong some how.
But not here .
⚠️ possible spoilers ⚠️
These two right the moment they said,”Hello.” To each other.
But it was just too short Riley had only been there about 24 hours when her and Drew seeming to be falling in love.
Another day and night together and they’ve shared their most painful secrets .
They go off and spend an amazing day and most of a night out w/the crew in the gorgeous out doors and the baby is coming.
Then it’s like she’s barely popped baby Harper out and she’s “cleared “ to leave.
Seriously ?
WTH ??!?!?!
It was like our pops the baby,she’s cleaned up and dressed and running off to the car to go.
Again
Seriously ?
And
WTFH?!?!?
I’m getting really,really sick of being told how F’ing amazing these women are and yet they act in incredibly stupid ways that don’t make sense.
Why ?!?!!
I just don’t get it. Like soo many tell her,Riley flows into these ppl’s lives easier an faster that a rain storm in a drought .
She fits in w/them easier than the right piece in the right place in a jigsaw. But at the same time there’s this weird BS disconnect between the MC’s and what’s being said .
It’s like the weight of their words to each other carry the weight of the world and yet are absolutely meaningless and carry less weight than a single feather all at the same time.
One minute he or she ( mainly she) are getting their feelings hurt because their relationship isn’t some sorta love at first sight/ let ( the one being asked questions) just bear my soul to you and confess my undying love to you . And the next after the one has the other ,the female, acting like being called his mate and being told their committed to them and their Wild our control finally “settles “ for them ,they act like it’s no big deal and or insecure and plan to walk away.
Honestly, What,. The. Hell?
Drew is calling her his mate that very night she arrives,he out or control bear finally calms . For. Her!
He’s bearing his soul to her. Tells her he loves her. Very one adores her and she’s happy than she’s ever been but she’s just gonna walk away ?
Why ?
As painful as giving up the child is,with all that happens it doesn’t make any sense.
You never see her even try to discuss the future w/Diem and Bruiser, I thought they’d be a bigger part of the story.
I love it ❣️ full stop. But Riley wanting to cowardly run after all was said and done didn’t make a lick of sense and really hurt the story for me .
She opened herself up to soo much ,her willingness to be soo blind was just plain dumb.
Running was weak not strong and not in line w/the person you had me loving so hard.
Read more
2 people found this helpful
Helpful
Report abuse

Debbie
3.0 out of 5 stars Drew's and Riley's story
Reviewed in the United States on December 1, 2018
Verified Purchase
Woodsman Werebear is book 6 in this series which is a series about a group of misfit grizzly bear shifters who have formed a family known as the Ashe Crew. They’re quick and easy to read stories.

This was Riley’s and Drew’s book and it was okay. For some reason, this one felt a lot shorter than the previous books. It felt more impersonal and I felt no connection to the characters whatsoever. It never felt as if I got to know either Drew or Riley. There just wasn’t much to the story. It definitely didn’t feel like it was worth the three dollars it cost.

In every story the characters have fallen in love quickly. Drew’s and Riley’s insta-love was whiplash fast. They meet that morning; about an hour later they see each other again and Drew’s protective instinct causes him to change into his bear; and about fifteen minutes later they were in the shower together before hitting the bed. If I had blinked, I would have missed it.
Read more
5 people found this helpful
Helpful
Report abuse

CJonline
5.0 out of 5 stars Great Addition to a wonderful series
Reviewed in the United States on January 30, 2019
Verified Purchase
Woodsman Werebear is the sixth book in the Saw Bears series. It is written in third person with a high amount of explicitly detailed sexual content and adult language throughout. A short to medium length book. I have to recommend that you read all the other books in the Saw Bears and Fire Bears series to get full enjoyment from this one; it is too far into the series for this to be a standalone.

We get a bit of a time jump in this story… It is about 18 months after the Fire Bears series and the Bear Shifters ‘come out’ to the world or at least 18 months since the end of book 5. It seems to be it should be a bit longer but Wyatt (Brook and Tagan’s son) is now 18 months and he was born at the end of Sawman Werebear (Saw Bears book 5) so I guess it fits. Deim and Bruiser from Book 5 hire Riley to carry their child as having a baby would kill Deim. It all works math wise but to me It just seems like it should be a longer time frame. Riley is at the end of the pregnancy so there is 9 months of the 18, that leaves 9 months to ‘be ready in the relationship to have a child’, get a lawyer to draft paperwork/contracts, find a doctor, interview surrogates and pick one, go to the doctor to harvest and fertilize and get it ready to be implanted, ship it to Riley’s doctor and implant… they did say it took the first time but it all seems so rushed to do all of that in 9 months.

Drew and Riley are a unique and loving pair. We know Drew from the past Saw Bears books and I really liked him; this story just confirms it all. He is funny and caring, kind and aggressive with a huge protective streak. Riley seemed a little to tinder hearted to be doing this Surrogacy thing but her past made it work for her and doing this for Deim makes Riley complete and fulfilled so she can move forward. The thing with Riley’s ex was handled great and swift so there is complete closure on that front. In the end everyone is happy and we get two new additions to the Ashe Crew.

The story is well developed and clear with good editing and consistency throughout. I highly recommend all the Damon’s mountains books but advise reading them in order. These stories are told in a way that doesn’t really date them… so they are easily read in one sitting and can be reread over and over.
Read more
Helpful
Report abuse
See all reviews

Vallene
5.0 out of 5 stars Redemption
Reviewed in the United Kingdom on September 8, 2020
Verified Purchase
I have read from book one but this pulled at heartstrings so much...such a beautiful book. A true happiness was brought to the Ashe crew with one selfless act of redemption. Highly recommended but please to truly enjoy the true warmth and heartfelt love of these stories read from book one. T. S. Joyce has a list to read the book in the correct order. Do it. They are easy to read and even easier to love.
Read more
Report abuse

Kindle Customer
5.0 out of 5 stars Spokesman Werebear : Saw Bears (6)
Reviewed in the United Kingdom on May 14, 2020
Verified Purchase
Riley is very pregnant, she is a surrogate and within few weeks of giving birth. Her ex is out of prison and ignoring the restraining order. So she goes to meet her baby's parents early. Excellent, each book is better than the last in this series
Sue P
Read more
Report abuse

Cathy.
5.0 out of 5 stars Review
Reviewed in the United Kingdom on November 14, 2016
Verified Purchase
Can't believe I am getting through these so quickly!!! Riley and Drew's story is just amazing and romantic loved it
Read more
Report abuse

Samantha Foster
5.0 out of 5 stars Bearilliant one click now
Reviewed in the United Kingdom on August 20, 2015
Verified Purchase
Another fantastic book are Joyce your books are amazing and you are a one click Author for me
Read more
Report abuse

deborah fairbrother
4.0 out of 5 stars Brilliant read
Reviewed in the United Kingdom on May 4, 2018
Verified Purchase
Loved this series
Read more
Report abuse
See all reviews