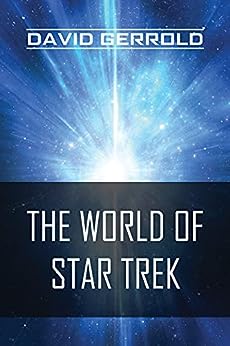 by David Gerrold (Author) Format: Kindle Edition
See all formats and editions
Sorry, there was a problem loading this page. Try again.
In The World of Star Trek, David Gerrold opens up dialogue on the people, places, and events that made Star Trek one of the most popular series ever. Gerrold discusses what was successful and what wasn't, offering personal interviews with the series' legendary stars and dissecting the trends that developed throughout the seasons.

The complete inside story of what happened behind the scenes of the Star Trek universe, from scriptwriters' memos to special effects and more, The World of Star Trek is the companion all Trekkies need for the most all-encompassing breakdown and analysis of Star Trek.
Read more
Previous page
Next page

4.4 out of 5 stars
4.4 out of 5
47 global ratings
How are ratings calculated?
To calculate the overall star rating and percentage breakdown by star, we don’t use a simple average. Instead, our system considers things like how recent a review is and if the reviewer bought the item on Amazon. It also analyzes reviews to verify trustworthiness.

Jason A. Miller
5.0 out of 5 stars Dated, But Tremendously Important
Reviewed in the United States on July 20, 2014
Verified Purchase
I owned a well-worn copy of the original 1970s' edition of this book, which was written before "Star Trek"'s improbable resurrection; I had inherited it from a Trekkie aunt, and spent a lot of time thumbing through the episode-guide portion of the book, while making my way through original Trek episodes aired uncut on PBS in the mid-1980s.

The Kindle edition of "World of Star Trek" is a reprint not of the '70s version of the book, but rather of the 1984 edition, which includes much expanded material on fandom, the interrupted effort to create a second Trek TV series, and the three hit theatrical movies which followed. However, I still found myself remembering a large number of passages and anecdotes held over from the original volume; my tattered paperback edition of the book evidently made a far bigger impression on me than was obvious at the time.

"World of Star Trek" is written by David Gerrold, who's still quite active in sci-fi fandom and is a fun follow on social media even today in 2014. The book contains material not only on the genesis and production of ST:TOS, which will be quite familiar to you from thousands of other sources, but also contains a number of candid interviews with all of the original cast, recorded in the early 1970s when fandom was still young and not yet jaded. These early unguarded quotes from the likes of Shatner, Nimoy, Kelly, Doohan, Koenig, Sulu, Nichols, might well give you a new perspective on the original cast.

Gerrold also spends a fair bit of time critiquing what was wrong with ST:TOS -- illogical premises, production flaws, and a breakdown of originality and credibility in the scripts. These criticisms were probably more groundbreaking when the book first came out in 1973 -- they're now widely-held and institutionalized opinions found all across fandom. But, what's remarkable about this critique now, is that the solutions Gerrold gave, for some hypothetical future Trek series, were adopted almost entirely wholesale into Star Trek:TNG, a show not even on the drawing board when the second edition of this book was released in 1984. Gerrold almost certainly saved Star Trek, as this book doubtless helped inspire ST:TNG (on which Gerrold worked during its first season), which came to surpass ST:TOS in popularity and which in turned three more (increasingly poor) follow-up TV series.

Gerrold also accurately addresses what was wrong with Star Trek: The Motion Picture, and what was so, so right about Star Trek II: The Wrath of Khan. However, his complaints about Star Trek III: The Search for Spock (which revolve mostly around the destruction of the original Enterprise in that movie) no longer hold up very well, now that we know there were five follow-up vessels bearing the name Enterprise, as well as two other TV series not featuring the Enterprise at all. But, even the look at Search for Spock is an interesting time capsule, as it was written before the movie had even enjoyed its theatrical release.

Priced very reasonably, and written in a very funny and engaging style (even the footnotes are must-reads), this book is well worth a few hours of your time even today. Even the references to the primitive pre-Internet "computer bulletin boards" to which Trek fandom was migrating, show that Gerrold was quite ahead of his time in writing about Star Trek in 1984.
Read more
19 people found this helpful
Helpful
Report abuse

Irene
5.0 out of 5 stars Star Trek in Review
Reviewed in the United States on April 12, 2020
Verified Purchase
It was interesting reading this book which was written in 1984 in the year 2020! There were some very good interviews with the original cast members including some directors. The author had a lot of good and interesting personal insights and observations. I did find myself skimming over some parts that were a bit long winded for me but I think it just depends on what you're most interested in reading about. I loved the cast interviews and the parts about the movies. It is a bit surreal at the end as the author is waiting for the premier of Star Trek III. It's a bit like its own sci-fi ending - if only he could look into the future that is today and seen STTNG, Star Trek Voyager, Deep Space Nine and now Star Trek Discovery and Piccard not to mention how many movies? Wow.
Read more
2 people found this helpful
Helpful
Report abuse

Zac Imboden
4.0 out of 5 stars A good re-read after all these years.
Reviewed in the United States on May 16, 2017
Verified Purchase
I read this as a teen, back when it was relatively new. What I like is Gerrold's thesis about television drama and what elements are needed, in what combination, to make a series successful. This is not a book of Star Trek trivia, but more an analysis of what makes a good Star Trek script and how the Star Trek fan base got its start. Written in Gerrold's slightly wry and intelligent voice. If only he had given us more original episodes!
Read more
2 people found this helpful
Helpful
Report abuse

Matt G. Leger
5.0 out of 5 stars The story of STAR TREK's genesis (both of them!) by one who was there
Reviewed in the United States on April 6, 2015
Verified Purchase
David Gerrold has written a great many excellent works of science fiction, but this is far and away my favorite book of his. He is one of those fortunate few still around today who was "present at the creation" of one of the world's biggest, longest-lasting and most influential pop-culture phenomena, the original STAR TREK television series (as author of one of its most popular episodes, "The Trouble with Tribbles"). Decades later, he was also present when Paramount Pictures called on Gene Roddenberry to capture lightning in a bottle a second time with the creation of STAR TREK: THE NEXT GENERATION, as the new show's story editor.

Peppered with behind-the-scenes stories of (and interviews with) the cast and crew and incisive analyses of the show's episodes and characters, all written in a highly engaging, witty and personal style, this memoir/commentary was actually released twice -- once in the 1970s when TREK fandom was just beginning to build up a head of steam, and a new updated version following the release of the first two STAR TREK theatrical films. If you want real insight into what made this franchise the enduring hit that it is, you can't do very much better than to pick up a copy of David's book. It makes a perfect bookend to the canon of Trekker meta-literature with STAR TREK LIVES! by Sondra Marshak et al., which tells the same story from a fan's perspective and is every bit as good.
Read more
3 people found this helpful
Helpful
Report abuse

R. Hanley
3.0 out of 5 stars Missing the Photographs of Earlier Printings
Reviewed in the United States on September 19, 2019
Verified Purchase
I was happy to finally find this book in a hardback edition. My old paperback is falling apart after several moves around the country. Sadly, this version is lacking the various photographs from the series. This makes this book less interesting. I'm just glad I didn't pay $50 for this disappointment.
Read more
One person found this helpful
Helpful
Report abuse

J Pearson
5.0 out of 5 stars So good to see this book available again!
Reviewed in the United States on January 28, 2014
Verified Purchase
My older brother owned David Gerrold's "The World of Star Trek" when I was a little kid, and like so many of his books and comics I read it several times. It's a well-written overview of Star Trek as it was in the years immediately after the show's initial run. Gerrold has a lot to say both good and bad about the show and notes a few things he would have done differently - some of which we many years later saw incorporated into "The Next Generation". There's also a fascinating and now very nostalgic look at Trek fandom as it existed in those days.

This is a greatly entertaining book well worth the attention of any Star Trek fan, and for the price a rather incredible bargain as well.
Read more
5 people found this helpful
Helpful
Report abuse
See all reviews

Andy Wixon
3.0 out of 5 stars A Lost World
Reviewed in the United Kingdom on April 27, 2016
Verified Purchase
Written in 1984, this is mainly of historical interest now, but still a worthwhile read if only for Gerrold's (slightly laborious) analysis of what made the original show work (or not). There is some irony in the author's earnest claims that there were no feuds on the Star Trek set, not to mention some of his nudge-wink comments about George Takei going jogging with a gang of female fans every morning. A discussion of the format, some behind the scenes anecdotes, a look at fandom (including slash), a promotional document for the series/franchise; might be interesting to contrast it with Gerrold's Star Trek writing after he fell out with Roddenberry (whom he referred to as 'the steamroller of lies' at one point). If nothing else a reminder of what the world was like before the internet got going.
Read more
Report abuse