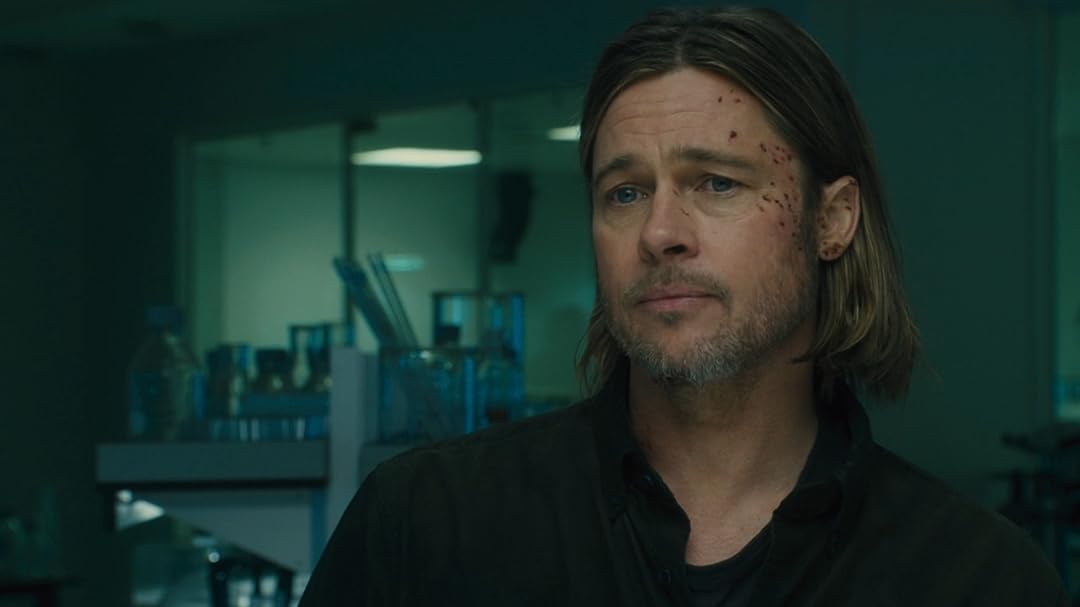 (50,275)
7.02 h 3 min2013X-Ray18+
Former U.N. employee Gerry Lane is called upon to help stop the chaotic pandemic that has gripped populations around the world. He fights to keep his family safe, while searching for an answer to the outbreak.

AnonymousReviewed in the United States on December 1, 2018
1.0 out of 5 stars
I wish I could give zero stars. This cut ruined a good movie.
Verified purchase
It is rare that I find myself writing a negative review, usually I don't care enough to waste my time on a negative review. But I write this in the hopes of saving others from my mistake. For context, I generally like the zombie genre, and I really liked World War Z when it came out, even though it deviated so much from the source material. It was a fun, crazy action-zombie movie that had a surprisingly good flow for all the reports of troubled production. I would give World War Z, the theatrical cut, 4 stars out of 5. The problem with this version of the movie is there are seemingly dozens of additional seconds of movie in lots of weird places. Rather than a few big scenes that were cut in favor of time, it appears the editor(s) for the original movie shaved lots of weird dialogue and useless or confusing extra action sequences in favor of flow. This unrated cut, with all the extra little padding, is basically unwatchable. My fiance and myself were excited to watch World War Z again and ended up both looking at phones and not paying attention most of the time due to how bad the pacing had gotten.

For example, the scene in the stairway towards the very beginning where they are trying to get to the helicopter, has a ton of extra little zombie fight scenes that just make the whole thing more ridiculous. Some of the dialogue in South Korea is downright confusing or bizarre. The airplane sequence for some reason is even longer than it was before.

Praise movie editors for keeping us from having to sit through extra hours of dreck like this. This made me question buying movies with extra cut content ever again.

Rory LionReviewed in the United States on May 15, 2022
3.0 out of 5 stars
Good Movie But Please Leave the Leftist Propaganda Out Next Time!
Verified purchase
Good script, good cast, good production, good special effects, and good editing! This movie had a lot going for it except for one huge flaw--a plot that laughably portrays the United Nations and the World Health Organization as the saviors of mankind during a zombie pandemic. Unfortunately the UN and WHO showed their true colors during a real pandemic--the Covid Pandemic--and they plus the Center Disease Control revealed themselves to be bloated bureaucracies controlled by Communist China. Truth is a stranger to the UN and WHO, and also to the Hollywood leftists who wrote this movie's script.
39 people found this helpful

The movie focuses upon Bradd Pitt as Gerry Lane, a man with experience in conflict zones around the world who is asked by the acting head of the United Nations Fana Mokoena as Thierry Umutoni to try to discover the cause of the zombie apocalypse so that scientists might start working on a cure. Things automatically go wrong and Gerry has to travel the world to South Korea to Israel and to England investigate.

This is the Unrated Version, which I wish would have been the theatrical release, but they didn’t want an R rating. Unless you really know the film, you probably even wouldn’t notice the differences between the two because they are very subtle. One that stands out is when Gerry is in Israel and a zombie bites the arm of a soldier named Segen played by Daniella Kertesz. In the Unrated Version you get a graphic amputation as Gerry cuts off her arm to try to stop the infection from spreading with some gushing blood.

What made this movie so good was the zombies. Since the start they had always been portrayed as slow moving living dead, which people could outrun if given the chance. Here, zombies were like the undead on steroids. They ran, they jumped, they were like wild beasts hungry for flesh! They swarmed like bees. They took leaps off buildings. They breached walls. It was incredibly exciting and created lots of tension when they showed up because people really had to run for their lives to survive. This really put World War Z heads and shoulders above most horror films and it’s still fun to watch to this day.
C

norbacReviewed in the United States on August 3, 2018
5.0 out of 5 stars
Great collection for a great movie
Verified purchase
Great collection! I read the book which has absolutely nothing to do with the movie. The movie is much more suspenseful and action-packed by the way. However, if you read the book, either before or after you watch this movie, you will not be disappointed either. It's just two different approaches. The book, by the way, reads like a true narrative, as if was part of actual human history. The movie keeps you on the edge of your seat almost from the moment it begins. I don't have 3D equipment at home but the Blu-ray was just as good. Incidentally, the Blu-ray is the "unrated" version. The DVD is the theatrical version. Quite frankly, despite a few minor scenes here and there, I didn't notice the difference.
26 people found this helpful

David LindsayReviewed in the United States on July 18, 2020
4.0 out of 5 stars
Brad fights zombies
Verified purchase
World War Z is my favorite zombie movie. Brad Pitt is excellent as a UN investigator brought out of retirement to help find a solution to the world’s zombie problem. He and his family live in Philadelphia but when the city is overrun, he drives them to Newark for safety. Having visited Newark a few times, that would not have been my choice. Brad is recused from the top of an apartment building in a helicopter and he joins a team trying to save the world. He visits Korea, Israel, and the UK. He finds there are zombies everywhere.

There is plenty of action and it is an enjoyable movie. The zombies are fast and hard to kill. The film looks good. It cost $190 million to make. It grossed more than $540 million worldwide. It is the highest-grossing film of Pitt's career and is the most successful zombie movie of all time. A sequel was announced shortly after the film's release in 2013, but in 2019 it was canceled, reportedly due to budget issues. The end of the movie was a little anticlimactic, perhaps because its makers expected there to be a sequel. Probably by 2019, most people had probably seen enough shows about zombies on TV.

The film was directed by Marc Forster who is best known for Monster's Ball, Finding Neverland, Stranger than Fiction, The Kite Runner, Quantum of Solace, and Christopher Robin.
9 people found this helpful

SuzanoReviewed in the United States on October 12, 2020
5.0 out of 5 stars
A super hero without surreal special powers. Extremely entertaining!
Verified purchase
There are no super heroes with capes and special powers. There's a man with a wife and two kids who is sent on a quest to solve the worldwide pandemic- a zombie apocalypse. No, he does not fight them physically, no fancy moves like in the comic book genres. He uses his intellect to discover the origins and clues of this infectious disease. It has been seven years since WW-Z was released and we are inundated with sequels and even more sequels of the super heroes joining forces against some ridiculous evil foe. World War Z is fun and you become part of the journey. Will we ever see original creative movies again? I was so hoping for a sequel to WW-Z. In the meantime, I will watch it again.
To Brad Pitt, please make a sequel!!
6 people found this helpful

LisaReviewed in the United States on August 24, 2022
5.0 out of 5 stars
Superior In Every Way
Verified purchase
I have seen this film probably twenty times since it's release. This film has an excellent cast, storyline, and is not only a great zombie film but also a great film unto itself. It has a sense of prophecy in it, of Mankind's dilemmas and arguably, our doom. It has great humanity as well. It has a realistic global reach and perspective. Also interesting to watch it both pre and post the covid era. Notably it gives the viewer a true feel of how quickly human lives can be interrupted by unexpected events. I also like the Jerusalem scenes and the underlying spiritual tones suggested by Jerusalem. Don't miss this, and watch it more than once. Superb.
5 people found this helpful

JoeReviewed in the United States on November 13, 2022
3.0 out of 5 stars
Don't expect much, you will then not be as disappointed.
Verified purchase
Nothing original. A glaring continuity error with the crowbar changing ownership randomly. I could be wrong, only saw the once. The notes said there was reference to Alive with regard to the metal through Pitt's obliques. WHAT!?! I guess they have never seen Commando, Rambo or probably every war movie before that. Just an example of nothing original, would not consider that a spoiler. It is not a bad movie but I watched because I had heard so much hype. It is good entertainment and they spent a lot of money on it. Every scene has action but the story is not all that complex. The answers they propose are pretty evident before they state them so I think that means they did a good job visually but no surprises. I would say that there is no way Brad hit anything with that rifle despite his alleged experience in dangerous places. That the ship captain did Pitt dirty would never have happened. It looked like a swipe at the military that was out of place and not realistic. At least the military for the entire history of the United States before Clinton. Now with woke-ism the martial and moral virtues are not consistent through the ranks, to be generous. I also enjoyed how the UN is given such importance but no role given to UN troops. lol I know many people think a lot of the UN. No one will convince the militantly stupid. The Omega Man (with Charlton Heston not the Will Smith version), Sphere, even Vampire movies are more complex and entertaining. The ending seemed to rip off Terminator. There were more plot twists in Young Frankenstein! This is a simpleton movie for Climate Change hysterics to idolize. But I enjoyed it anyway. The production value was high. I love helicopters. As I mentioned before, lots of action. One last thing. I guess they were waiting for Pitt to arrive before they started singing? And I think the whole country would have been mobilized, not singing. Oh yeah, kind of disappointed in the wife character. She starts as a strong woman and is reduced to repeating "I love you" and otherwise not being so strong. I don't thing this movie respects the audience.
One person found this helpful
See all reviews
Back to top
Get to Know Us
Make Money with Us
Amazon Payment Products
Let Us Help You
EnglishChoose a language for shopping. United StatesChoose a country/region for shopping.
© 1996-2022, Amazon.com, Inc. or its affiliates