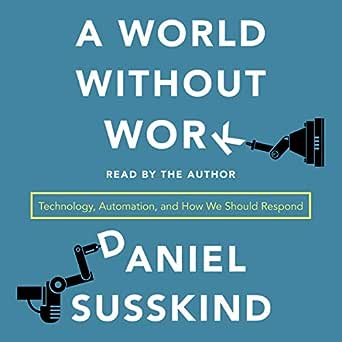 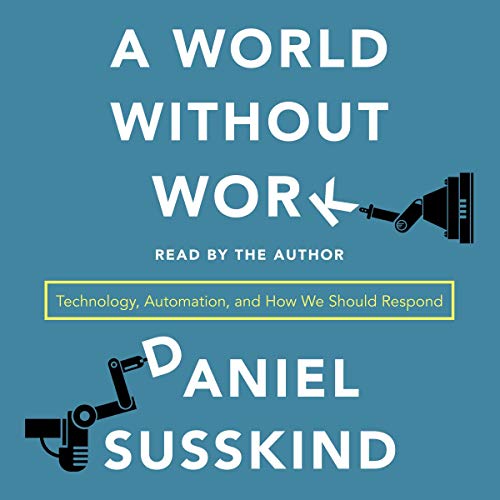 A World Without Work: Technology, Automation, and How We Should Respond

A World Without Work: Technology, Automation, and How We Should Respond
Daniel Susskind (Author, Narrator), Macmillan Audio (Publisher)
Get this audiobook free.
$14.95/mo after 30 days. Cancel anytime

3.7 out of 5 stars
3.7 out of 5
15 customer ratings
How does Amazon calculate star ratings?
Amazon calculates a product’s star ratings based on a machine learned model instead of a raw data average. The model takes into account factors including the age of a rating, whether the ratings are from verified purchasers, and factors that establish reviewer trustworthiness.
Top Reviews

Serge J. Van Steenkiste
VINE VOICE
4.0 out of 5 stars Machines, Not Human Beings Will Become the Default Choice to Perform Most Activities
Reviewed in the United States on March 22, 2020
Format: HardcoverVerified Purchase
Daniel Susskind reminds his readers that automation either replaces or complements human beings. In other words, automation not only affects the amount of available work, but also the nature of that work. The ongoing impact of increasing automation on both the agriculture and manufacturing sectors in advanced economies since the first industrial revolution can give us a glimpse of what will be in store for the service sector.

Both agriculture and manufacturing now employ far less workers than they once did. Most of the resulting ‘labor surplus’ has gradually migrated first from agriculture to manufacturing and subsequently from manufacturing to the sector of services. Furthermore, what the remaining workers employed in these two fast-evolving sectors do is increasingly different from what their predecessors did. In addition, these workers continuously have to upgrade their skills to remain employed in both sectors.

The service sector that now employs most people in advanced economies will gradually share a fate similar to the one that is applicable to the agriculture and manufacturing sectors under the pressure of further automation. Mr. Susskind repeatedly stresses that too many people hold a simplistic view of both automation and frictional, structural technological unemployment: Machines cannot be taught to perform “non-routine” tasks, because people struggle to explain how they perform them. The author clearly demonstrates that machines process information and data differently and more efficiently than most human beings do. None of these machines have gained an ‘artificial general intelligence’. These machines display an ‘artificial narrow intelligence.’

1) DeepMind has created a program that can diagnose over fifty eye diseases with an error rate of only 5.5%. It performs as well as the best clinical experts out there.
2) JP Morgan has developed a system that reviews commercial loan agreements, resulting in a saving of about 360,000 hours of human lawyers’ time.
3) IBM’s Deep Blue beat Garry Kasparov at playing chess.

Mr. Susskind invites human beings to start thinking about the residual tasks that will remain for them:

This gradual substitution will oblige governments in advanced economies to address three key, related issues: Inequality, power, and purpose. What will these technologically unemployed people do in a winner-take-all environment that further increases income / wealth inequality? How will these (former or would be) workers be compensated if traditional jobs are out of reach for them? What will the purpose of the welfare state be in a world where machines take over many tasks that were previously deemed out of reach for automation? Will unscrupulous populists mobilize this new ‘proletariat’ for their own nefarious purposes either domestically and/or across borders?

The diminishing employment rate among lower-qualified men say in the U.S. reflects a multi-dimensional mismatch: 1) Skills, 2) identity, and 3) place. Up-skilling has clearly failed to address this mismatch, despite the claims of too many out-of-touch policymakers. The lack of gainful employment among these men makes them both unproductive and potentially dangerous to the stability of the society at large.

In a world with less paid work, taxation of workers, capital, and big businesses will be a critical mechanism in addressing to some extent the increasing income / wealth inequality. A conditional basic income (CBI) will be the only palatable solution to the haves. The universal basic income (UBI) smells too much of a free lunch for moochers. The CBI will allow the ‘non-traditional’ workers to find new meaning and purpose in life, while providing more stability and security to the taxed ‘traditional’ workers, capital, and big businesses. Sustenance and entertainment provided by government to appease public discontent has not lost its potency since Antiquity.

In summary, nothing in life can be said to be certain, except death, taxes, and the relentless process of machine-driven task encroachment.

Bryan J. Schaefer
3.0 out of 5 stars Not the book I was wanting
Reviewed in the United States on March 12, 2020
Format: Audible AudiobookVerified Purchase
The author spends a lot of time framing the discussion and talking about the impact technology has had so far, but spends little time leaning forward into the issue. I was underwhelmed by the ideas of what the future looks like, both from an impact perspective and from a proposal perspective.

Ultimately it's a good book for anyone who isn't well aware of the impact automation has had so far and needs a 101, but is largely a recap for anyone who's been following the issue already.
Read more
Helpful
Comment Report abuse

Mickey Long
5.0 out of 5 stars Worthwhile, but Much Worth Disagreeing With.
Reviewed in the United States on January 22, 2020
Format: Audible Audiobook
5 stars b/c the learned author provides a timely, updated, well-organized, and well-researched discussion of an important and necessary subject. I fully enjoyed the Audible Book listen. Mr. Susskind's self-narration was perfect, a very good job. Though, I admit to putting it on 1.25x speed. I disagree with much of the reasoning and resolutions presented. But, it certainly contributes to the civil discourse needed on how we will "value" a life worth living, where " paid work" is not an option for folks of all education & experience levels, the end of the Era of Labor. (Utopia, for me, but not many). Those of us who have kept up during the past decade with this topic (see title) will have read or heard much of what is discussed. For those who have not this is a good primer and beyond. Indeed, the author covers some new ideas and sub-topic worth hearing. I urge all interested to listen to or read this material. If we are to avoid starvation, slave wages, homelessness, revolutions, and despair, many must know this material.
Read more
6 people found this helpful
Helpful
Comment Report abuse
See all reviews from the United States

Geoff Crocker
4.0 out of 5 stars Right question, weak solution
Reviewed in the United Kingdom on January 22, 2020
Verified Purchase
Daniel Susskind raises the right question, and sets the right agenda and direction of travel. Technology acting through automation does increase productivity and reduce working hours per unit of output. This will inevitably either vastly increase output, or vastly reduce employment and aggregate wage. It needs an urgent solution such as a basic income.

Susskind follows David Autor in distinguishing labour substituting and labour complementing aspects of automation. In fact, it’s the same phenomenon of increased productivity, only differentiated as to whether in early periods, increased output is derived from the same labour, or in more developed economies, decreased labour produces the same output, either due to satiation or to ecological constraints.

His analysis of automation technology requires a more complete typology than his ‘purist/pragmatic’ divide. A useful hierarchy might be
• Mimicry of human techniques
• Simple full enumeration techniques, but by powerful machine processors
• Deterministic algorithms, such as Kantorovich’s linear programming solution
• One-pass heuristic algorithms, such as Clarke and Wright’s vehicle scheduling algorithm
• Iterative adaptive heuristic algorithms, the basis of current AI
These are not ‘pragmatic’ techniques, but the implementation of some form of logic. Susskind doesn’t refer to the extensive literature on philosophy of technology, which might suggest that deductive logic is objective. All approaches therefore explore this same objective logic, and cannot be distinguished as ‘pure’ or ‘pragmatic’. The same literature is more nuanced on the interaction of human agency and technology objectivity than Susskind is in airily declaring himself to be ‘not a technological determinist’ (p9). Our choices may very well be very tightly constrained, if not totally determined.

Susskind’s wide-ranging claims need deeper challenge. His claim that technology has created more bank employment misses the fact that 3,303 bank branches closed in the UK from 2015 to 2019 (p27). He makes the contradictory complaints that US big business fails to pay tax in Europe, and then that it does pay tax in Europe! (p178-9).

But he’s right that education to high skilled work is not a solution, and that it’s not the number of jobs, but personal incomes and aggregate macroeconomic wage which is the worry. The trail he doesn’t follow is that both lead to debt, and debt leads to crisis and austerity.

His discussion of basic income (UBI) is unfortunately shallow. He worries about a UBI work disincentive, when it is clear that current welfare systems with their huge benefit withdrawal rates are major work disincentives compared to UBI. He underrates the gain in dignity, the increase in take-up, and the reduction in administrative cost of UBI’s elimination of means testing. And he proposes no alternative method to deliver income to citizens and aggregate demand to the economy as automation reduces both.

Membership of a UBI scheme would certainly need to be defined, but Susskind’s conditional ‘CBI’ based on ‘contribution’ is philosophically incorrect and practically unacceptable. The whole point is that technology can at least partially make goods and services available providentially, like air or rainfall. No labour contribution is therefore required to produce them, and none should be required to freely consume them. The practical implementation of his conditionality of contribution is horrendous, requiring an Orwellian ‘Political Power Oversight Authority…to watch over individuals as citizens in a society’ (p212,214).

UBI should be exactly as defined - universal and unconditional. It can be financed by sovereign money, and would avoid the economic crisis and austerity created by technology-led reduction in earned incomes, which have then been supplemented by household and government debt.
Read more
3 people found this helpful
Helpful
Sending feedback...
Thank you for your feedback.
Sorry, we failed to record your vote. Please try again
Report abuse

Andrew S.
1.0 out of 5 stars Don't bother
Reviewed in the United Kingdom on February 14, 2020
Verified Purchase
Shallow and repetitive. Completely fails to answer the few questions it poses.
Read more
One person found this helpful
Helpful
Sending feedback...
Thank you for your feedback.
Sorry, we failed to record your vote. Please try again
Report abuse

Jens Nachtwei
5.0 out of 5 stars great read
Reviewed in Germany on February 3, 2020
Format: Kindle EditionVerified Purchase
One of the best books I have read on the subject so far. Susskind clears up some wrong assumptions that are often repeated in other books on AI and the future of work. In addition a very clear language, wonderfully sorted arguments and entertainingly written. Very clear recommendation.
Read more
Helpful
Sending feedback...
Thank you for your feedback.
Sorry, we failed to record your vote. Please try again
Report abuse