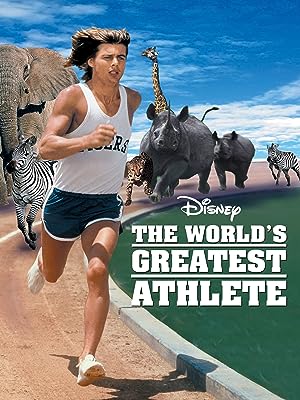 Omegagirl2020Reviewed in the United States on June 1, 2021
5.0 out of 5 stars
Fun JMV vehicle but a little trying many years later
Verified purchase
Jan-Michael Vincent was such a huge star in the 70s. Before that, he was on several t.v. shows, but I think TRIBES (1970) was when he really struck gold. It's a hard film to find but very relevant in its day. Disney, no doubt, had a team to figure out a great vehicle for this new star where they could really show him off. He was to the girls what Farrah Faucet was to the boys. And all natural. World's Greatest Athlete was a book before it was a film. I liked seeing Jan-Michael again on film at a time when the world was his oyster. He was actually 27 here. John Amos was a last minute replacement for Godfrey Cambridge. And not surprisingly, Dayle Haddon (Jane) never did well in her film career despite being cast next to this huge sex-symbol after leaving a successful modeling career. As a kid of 13 when it came out, I enjoyed the film. I loved all Disney films, which were so innocent and compelling for the time. Having just watched it, it was a bit trying at times, the slap schtick humor was never my thing and Howard Cosell was particularly difficult to endure. But the beautiful setting (Lion Country Safari Park in Los Angeles), the gorgeous JMV, the amazing interactions with the tiger made up for the bad humor. I was disappointed by the ending as if someone could ever be as great as Nanu. But definitely a nice trip down memory lane.

OhGoshFlowerReviewed in the United States on March 12, 2013
5.0 out of 5 stars
A Disney/Sports Film Classic!!!
Verified purchase
A wonderful Hollywood sports film of 1973. I'll admit I've never been a true blue follower of the world of track & field, but this film will have you looking at the sport in a whole new light. Jan-Michael Vincent shines as the lovable Tarzan-like sports prodigy who attempts to make history by winning every event at the NCAA Track & Field Championship, when he is literally taken from the jungle to the gym by the scheming, victory hungry college coach, Sam Archer (John Amos) and his inept but loyal assistant Milo (Tim Conway).

You'll completely fall for Nanu's innocent charm! And as the ultimate competition approaches, you'll enjoy not only a few laughs while watching others attempts at sabotage, but you'll also be impressed watching the climactic track meet that features actual commentary by legendary ABC-TV sportscaster, Howard Cosell (who appears as himself in a cameo). I'd definitely recommend it, since it is both a film that is equally as entertaining to sports fans as it is to fans of Disney, in general.

Mark ArnoldReviewed in the United States on September 25, 2005
3.0 out of 5 stars
Good But Inconsistent "Dopey" Disney Comedy
Verified purchase
I bought this DVD knowing that "The World's Greatest Athlete" wasn't one of the best of the "Dopey" Disney Comedies (For those who don't know, the "Dopey" Disney Comedies were the ones the studio made from 1959 ("Shaggy Dog") to 1984 (when Eisner took over). Admittedly there are stupider Disney comedies to come out since, but they don't have the charm and home-grown look and feel of these 59-84 ones.)

Anyway, blah blah blah, "Athlete" was issued in 1973 and is the first Disney feature to have an African-American star (John Amos) since "Song of the South"! The writing for this film is inconsistent. There are some genuine laughs, particularly from Tim Conway in his first Disney movie, and even some from announcer Howard Cosell!

As far as this DVD goes, I have had no luck finding it in US stores, so the version I received is a Canadian copy. I don't mind as long as it works in my player, which it does. The film itself is a widescreen transfer, which is a good thing, as Disney has sometimes not released their films to DVD in this format. The print quality is excellent and there are even some extras! Although, apart from the original trailer appear to be some random cutting room outtakes that don't have synchonized sound so you don't really know what's going on, and they're not particularly funny, either.

Overall, if you are a "Dopey" Disney Comedy fan, a Tim Conway fan, or wonder where the hell John Amos went after "Roots", check this one out. Otherwise, I direct you to "The Apple Dumpling Gang" for a better time and many more extras on the DVD.

Todd OttersonReviewed in the United States on March 6, 2020
5.0 out of 5 stars
One of Disneys best.
Verified purchase
A great Disney movie. Clean family fun movie, like Disney used to be. Saw this in the theater as a kid in the 70's. Still a classic. Highly recommended.
One person found this helpful

tonyReviewed in the United States on October 15, 2020
4.0 out of 5 stars
A good Disney non animated film
Verified purchase
Another good Disney movie. It is funny movie with Tim Conway. Good change of pace from what we are saturated with on tv these days. Go back to simpler times with cleaner entertainment.

Kindle CustomerReviewed in the United States on February 14, 2008
5.0 out of 5 stars
Every video library should have this classic
Verified purchase
The World's Greatest Athlete movie, based on the delightful book, is a light-hearted and clever cinematic treasure that I am pleased to be able to see, in adulthood, as it was one of my favorite movies as a child. My daughter absolutely loved it. This is a rare find that Disney had put out on DVD and an exceptional work that takes you back to a relative time of American innocence in the year 1973. My favorite scene is the witch doctor, Nanu's godfather, doing the social rounds at a coctail party at a physician's conference in his honor. Treat yourself to this.
2 people found this helpful

Linda A. D-RReviewed in the United States on February 6, 2013
5.0 out of 5 stars
Fun for the Family
Verified purchase
After all these years, "The World's Greatest Athlete" is still funny. I remembered Jan Michael Vincent as being a hunk but time and age have changed my view. He's just a cute blue-eyed kid doing a movie with a thin Tarzan veneer and no great classic lines. Tim Conway steals the show when the witch doctor shrinks him down to 3" tall in a bar. How he gets out is hilarious. This is still a family movie so break out the popcorn, gather the kids, and enjoy.
2 people found this helpful

Danny de LuqueReviewed in the United States on September 27, 2021
3.0 out of 5 stars
A Lot of Fun but Not Great...
Verified purchase
This was an OK movie. Disney has done much better. It was a lot of fun.
See all reviews
Back to top
Get to Know Us
Make Money with Us
Amazon Payment Products
Let Us Help You
EnglishChoose a language for shopping. United StatesChoose a country/region for shopping.
© 1996-2022, Amazon.com, Inc. or its affiliates