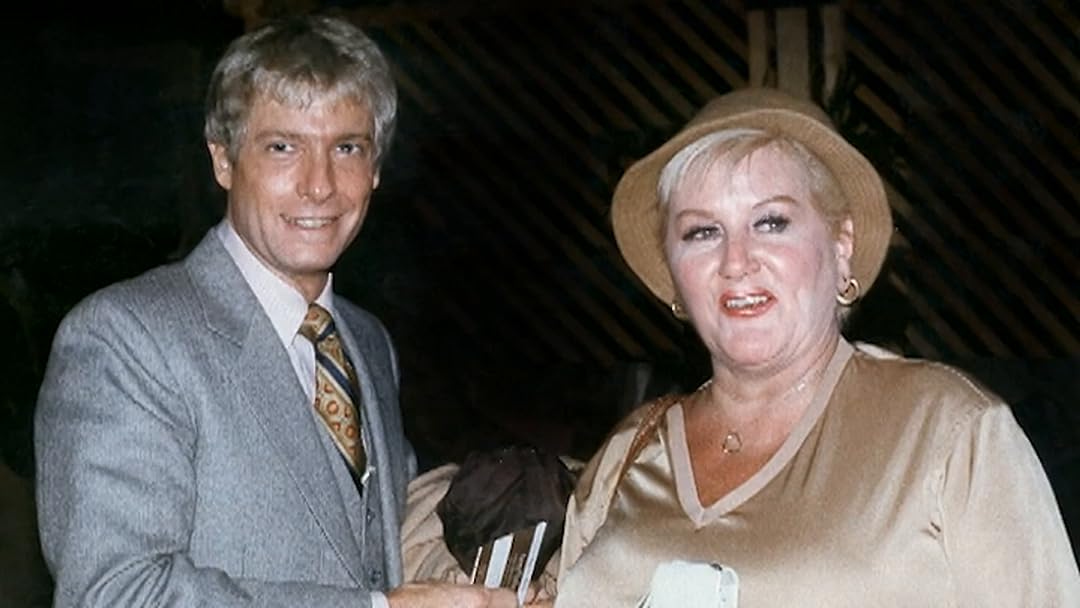 Wrangler: Anatomy of an Icon

Khristine JacksonReviewed in the United States on April 6, 2021
4.0 out of 5 stars
From .... Witch ... way .. comes ... which ??
Verified purchase
I am familiar with the late XXX actor Jack Wrangler ... I never saw any of his movies.. from the 1970's that was shot on film. He was very ambitious for his generation of "Porno-actor's" .. His good look's certainly help him along the way from legitimate work and adult film's. Then his return to the legitimate stage... with his former wife. He died in April 2009 from emphysema .. and Margaret died in 2011. His life and career choice's was one that many made fun of... who care's ? He seemed to have a good head on his shoulder's and a heart of gold. I know that many people want to know why would an "Openly Gay" male wed a woman much older than he..? Why he chose to deny himself a relationship with a homo-sexual partner ..? As long as he was happy .. who really care's ..?? As human's we will explore,engage and choose to do what ever we so desire . In the end he lived .. and he had the love of a woman that truly respected him. Free country ... ! It was nice to see the Vintage clip's from his movie's .. and learn about his family accepting him. Most families of that era.. would have turned their back's on their "homo-sexual" son's from the 1940's-1980's. We saw what happened during the 1980's-1990's during the "A.I.D.S" epidemic and how fortunate he was to have escaped that bullet.. Great documentary ...
One person found this helpful

BenAdams75Reviewed in the United States on September 4, 2021
1.0 out of 5 stars
Meh
Verified purchase
I hadn't heard of him, but find this type of documentary (about gay men and women before it was more accepted like it is in the 21st Century) intriguing. USUALLY, that is the case, but this one was a snooze fest. I found myself constantly checking to see how much time is remaining and then realized "I'm not interested in this."

He didn't know how to tell his story very well. His smoker's cackle became annoying and the other people interviewed didn't add much to the film.

Okay, I'll give it a go!---Jack Wrangler was a galvanizing as well as
tantalizing figure to millions of gay men in a time when the gay community
was coming into it's own on the world stage and searching for icons to identify itself.
Here he was, this beautiful, virile, MASCULINE white man with washboard abs,
golden hair, the voice, the smile, and of course.. shall we say, THE GOODS!! (-:
He forever shattered the stereotype of the weak effeminate sissy who couldn't
defend himself, wore his mother's clothes, etc., which had been drilled into the
minds of mainstream society as well as many an isolated shame-filled gay man
who had been shunned, beaten up, and pushed far back into the closet!

Born into a very wealthy Beverly Hills family, he grew up alongside the spawn of
the old hollywood elite. But Jack Wrangler was a different kind of guy who could
move between the world's of the Hollywood elite and the low brow world of the
gay street life in L.A. during the 1960's. Trying to capitalize on his looks,
chiseled physique and Hollywood pedigree, he made a foray into the world of legit
movies in 1968. He did a few roles here and there, but nothing that made a big splash
or would've alerted the movie world that a new master thespian was on the horizon!
The thing that struck me about Jack in this docu-bio was his complete candor
and total lack of guile while telling his story!
He was really a decent guy who you could've approached and befreinded.
He made a move to NYC in 1969 to try to get into the broadway acting scene to gain
some credibility in his chosen craft, but very soon realized that he was a big fish
way out of his native pond in cold, dirty & competitive New York City!
He moved back to L.A., and some time during the early 70's, when porn chic had become all
the rage, and both the gay liberation and sexual revolution were in full tilt,
he emerged as JACK WRANGLER!!--America's first gay porn icon!
He made countless gay porn flicks, many of which have become classics,
had legions of male fans, did strip shows and lectures across the country,
and was celebrated all over!--And the ladies dug him too! (-:
They provide very good video clips and footage throughout this documentary.
I was noticing while seeing it, that some of the fictional "Boogie Nights"
character "Dirk Diggler" was based partly on John Holmes and partly on Jack Wrangler.

Anywayz, ol' Jack was partying hard 70's style, making hit films and having
a gay old time, when he decided to do something that shocked and alienated
many of his devout gay fans....he decided to make the switch to straight porn!
(GASP!!--Oh no, he di-in't!!) Many of the female porn stars of the time lined
up to have their chance to work with Jack Wrangler, and to experience
his GIFTS first hand! (-: He made several well-recieved "straight-for-pay"
films and gained many friends within the straight porn industry for his
professionalism and machine-like dependability!
As if his gay fans weren't already confused enough, he then ups the antie
and gets MARRIED!!--Yes, to a woman!---Yikes!
This was quite the dinner party conversation, and many scoffed & made cruel jokes.
But Margaret Whiting, a successful singer from the early 50's was convinced she
had found her man, and knew all about his "shenanigans" despite the pleas of her
then teenaged daughter and all of her freinds! (Clutch the pearls, honey!!)
Jack was ever honest and completely identified himself as a gay man (with bi tendencies).
He told her that he didn't think a marriage would work, but Margaret wasn't hearing it!
The two were married and went through alot of ups and downs, but stayed together for
over 25 yrs until Jack's death earlier this year. The one thing that his marriage did
save him from was the onslaught of the AIDS epidemic in the early & mid 80's!
Both Jack & Margaret lost alot of dear freinds and collegues to the vicious virus!
They spent time in AIDS wards and hospices, trying to bring comfort and relief to
the many victims of the disease and also spent a great deal of money as well.
Through it all, Jack Wrangler never forgot who he was and remained a decent,
funny and very affable person who had led a very very interesting life! (-:
Rest In Peace Jack! (1946 - 2009)
This DVD was very enjoyable and I purchased it for my collection.
(Also see "Gay Sex In The 70's"...it's another great documentary about
this amazing time in America and in gay/bi history!)

Alex HReviewed in the United States on July 11, 2009
5.0 out of 5 stars
*WRANGLER*-- Beyond Just A Pretty Face, Hard Body & Hot Sex!
Verified purchase
I have never seen a Jack Wrangler blue movie, ever. I was way too young when he was in his heyday, but I did come across one of his sex mags when I was a teenager. Nevertheless, I certainly knew who he was. In the gay community, he was legendary. He sort of broke the mold of the gay clone of the 70s, who all had mustaches and wore leather. Jack Wrangler was blond, clean-shaven, and golden.

WRANGLER: ANATOMY OF AN ICON DVD was one of Amazon's recommendations and so I decided to check it out. It was eye opening.

He would go on to become a mainstream director and producer for stage plays and musicals. This doc was done in 2008 and features interviews with Wrangler at that time [Wrangler passed away on April 07, 2009, from lung disease at the age of 62 (LA Times)]. He's funny, warm, and very different from what I expected.

The film was entertaining and interesting. In the film, Wrangler recalls his father's dying wish as wanting him to do something on a grand scale, now that he was on the straight and narrow.

I think for a generation of gay men, Jack Wrangler already did something big (no pun intended). He was comfortable being a gay man and made no apology for it. He wasn't embarrassed or ashamed of his sexuality--or the sex itself---being top and/or bottom in his movies, thereby allowing other gay men not to be ashamed of themselves either. Perhaps that's why he was so legendary. Of course, looking like everybody's all American didn't hurt either.

A. Film LoverReviewed in the United States on July 13, 2021
4.0 out of 5 stars
Wrangling the Wrangler
Verified purchase
This is a nice little documentary about Jack Wrangler, a fascinating man who I once had the pleasure of meeting, along with his other half, Margaret Whiting. It's all very straightforward as documentaries go, which I appreciated. For those who are faint of heart, nudity wise, you do see all of Mr. Wrangler.

DonMacReviewed in the United States on January 8, 2009
4.0 out of 5 stars
You can't get more gay pop culture icon than this ...
Verified purchase
Wrangler has a legacy that will put him in the gay history books forever, which is what I think he really wanted. Madonna may have learned a thing or two from his marketing startegy. Regardless, he was a very likable, sex icon for the 70's early 80's the likes of which we haven't seen in a long time. Really a product of the times, he had an impact that still ripples throughout the community.

This film is okay - but feels a little lightweight. It is easy on the drama and tells us a lot of the obvious. Interesting though is to hear him finally explain his marriage to Margaret Whiting and how that has worked all these years. Some of the comments he makes in interviews in the "extras" section are more interstesing than those included in the film.

Overall, enjoyable and great to see a documentary about a very worthy subject.
10 people found this helpful
See all reviews
Back to top
Get to Know Us
Make Money with Us
Amazon Payment Products
Let Us Help You
EnglishChoose a language for shopping. United StatesChoose a country/region for shopping.
© 1996-2022, Amazon.com, Inc. or its affiliates