Written Space in the Latin West, 200 BC to AD 300 1st Edition, Kindle Edition 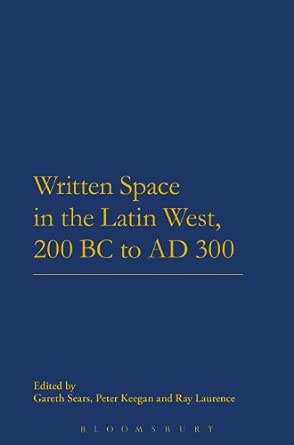 Flip to back Flip to front
Audible Sample Playing... Paused   You are listening to a sample of the Audible narration for this Kindle book.
Learn more
ISBN-13: 978-1474217088
ISBN-10: 1474217087
Why is ISBN important?
ISBN
This bar-code number lets you verify that you're getting exactly the right version or edition of a book. The 13-digit and 10-digit formats both work.

This volume explores the creation of 'written spaces' through the accretion of monumental inscriptions and non-official graffiti in the Latin-speaking West between c.200 BC and AD 300. The shift to an epigraphic culture demonstrates new mentalities regarding the use of language, the relationship between local elites and the population, and between local elites and the imperial power. The creation of both official and non-official inscriptions is one of the most recognisable facets of the Roman city. The chapters of this book consider why urban populations created these written spaces and how these spaces in turn affected those urban civilisations. They also examine how these inscriptions interacted to create written spaces that could inculcate a sense of 'Roman-ness' into urban populations whilst also acting as a means of differentiating communities from each other. The volume includes new approaches to the study of political entities, social institutions, graffiti and painting, and the differing trajectories of written spaces in the cities of Roman Africa, Italy, Spain and Gaul.
Read more

The greatest success of this volume is its attempt to force the reader to think of writing as a concept in toto ... Whilst each individual chapter has a clear merit for the study of that particular place or type of writing, it is the work as a whole that should be viewed as an important contribution to furthering the scholarly discourse on the significance and prevalence of writing in Rome and the West. (Virginia L. Campbell, University of Oxford Bryn Mawr Classical Review)

... Well-written and informative and the whole collection is bound together by a stimulating introduction by Laurence and Sears and a fascinating afterword by Keegan ... There are surprising and provocative connections to be made throughout the volume ... (
JRS 2016-05-01) --This text refers to the paperback edition.

The evolution of the public display of writing in Roman cities. --This text refers to the paperback edition.

Gareth Sears is lecturer in Roman History at the University of Birmingham, UK.

Peter Keegan is a Senior Lecturer in Roman History at Macquarie University, Australia.

Ray Laurence is Professor of Roman History and Archaeology at the University of Kent, UK.

Ray Laurence is Professor of Ancient History at Macquarie University (Sydney - Australia). He has previously taught at the Universities of Reading, Birmingham and Kent in the England.

He has throughout his career (first book published in 1994) advocated that Roman history and archaeology are two means to the past that need to be studied together.

Much of his work features an engagement with contemporary thinking from a range of disciplines that are involve the study of urban space, ageing and the life course, and the study of everyday life in the Roman Empire.

Moving to Australia in 2017, Ray has been struck by the sheer scale of Ancient History in Australia with over 10,000 students taking Higher Schools Certificate (HSC) in the subject, and substantial numbers enrolled at University - actually far higher than in the UK.