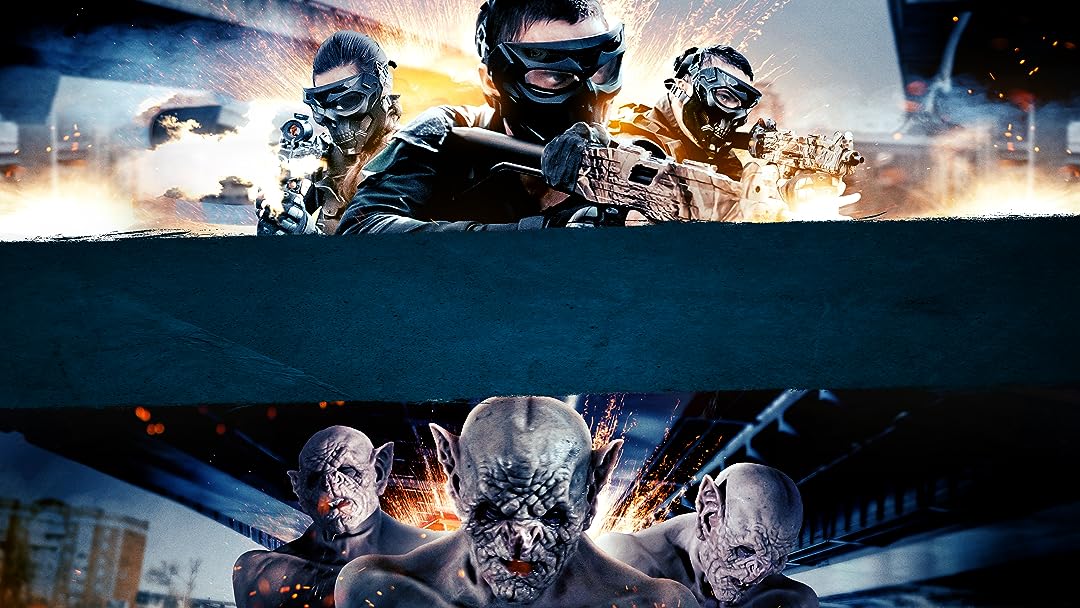 (245)
3.81 h 24 min2021X-Ray16+
An elite team of vigilantes plot to steal 14 billion dollars of laundered money from a notorious mob boss. After being double-crossed, they find refuge in the middle of nowhere with a mysterious family carrying an unsettling secret.

Shadow GaugeReviewed in the United States on September 17, 2021
5.0 out of 5 stars
I mean... Total B rate FDTD Rip-off.. but WTF!! Just Happened
Verified purchase
Ok, so it is a GAWD awful movie BUT!!! As a fan of early Peter Jackson, and all things done Bad Taste :D This flick is comically gory. The dialog at times, and the shear lack of direction only ad to the this train-wreck of a movie. The giant rubber Dracula, who at times seems to be quite the invalid, I THINK... not quite sure TBH.. is also a meek baldheaded chipmunk, who is anything but.. invalid :D

Anyway, the movie is not good,but compared to some of the resent "5 Stars" I have seen, this movie is stomach-able... Unless you got a weak stomach... The gore factor is pretty high, not quite "Dead Alive" and IO think they ran outa blood for the last scene, which was lacking... Actually the vary last scene made less sense than the movie... but whatever. Still better than most bad movies.

Amazon CustomerReviewed in the United States on September 12, 2021
1.0 out of 5 stars
Very slow; it put me to sleep
Verified purchase
I watched the movie because I thought it was a bank-robber type of movie, and it turned out to be a vampire movie that moved along ridiculously slow. I'd say it was quite boring and was putting me to sleep. I've give it about a D-rating type of movie. The movie script appears to me to be written by a Drama student in high school.
6 people found this helpful

Rob HamiltonReviewed in the United States on May 7, 2021
1.0 out of 5 stars
Terrible
Verified purchase
Poor acting, poor plot, also didn't make any sense for the most part, the star rating was 4 stars it had to be people affiliated with the movie ...
8 people found this helpful

John P NimitzReviewed in the United States on September 26, 2021
1.0 out of 5 stars
The WORST
Verified purchase
This is laughable and terrible all at the same time. I really did expect at least a three star.. hahaha, OMG.. It's one of those where the actors said.. OH a paycheck!! sign me up. However, I would've done it under an alias. This movie is horrible, not even in the genre of Horror, but to mix in an attempt to get 14Billion dollars from cartels and suddenly stop, IGNORING the people tied up in the kitchen as if it were normal. Its like walking in Dahmer's apartment, seeing hands degloved in the refrigerator and taking the cake out with coffee and not saying anything. They were all set on oh, are we be followed, oh this oh that.. NOT the people sitting or kneeling.. so bad.. SOOOO SOOOO bad. I think Teletubbies has better acting, story lines and effects.
5 people found this helpful

S. TamReviewed in the United States on May 8, 2021
1.0 out of 5 stars
Low Budget Movie
Verified purchase
Absolutely NOT worth watch, truly annoying each character simply constantly provoke one another and just keeps threaten, but nothing happens. Wasted money rented, which I don't understand how it was rated (4 STARS). Plus skips parts instantly, have to assume it just happen and on to the next part...Basically just sits in a house listening to story instead of any actions or anything...So to sum it all "One Stupid Movie, with Low budget production".
4 people found this helpful

Logain UT AblarReviewed in the United States on November 24, 2021
1.0 out of 5 stars
Hated it.
Verified purchase
Wrong Place, Wrong Time is bad on every level. The acting, cast, writing, pacing...it's all dreadful.

Examples of how horrible this film is, a group of supposed combat specialists decides to not just rob a cartel. They rob some of the biggest cartels and organized crime groups in the world in order to set up one major heist to the tune of billions with the leader of the group suggesting that they each could buy their way out of any trouble when the cartels come looking for them. Also keep in mind that the CIA and FBI are looking for them too and it's revealed that they've been burned. Meaning their identities have been exposed to all who want them dead. It's one of the most idiotic heist schemes I've ever heard and an example of how incredibly stupid the story is. A group could steal all of the money in the world, there is absolutely no way ANY cartel, mob, Yakuza, Triad etc is going to let that group live after the fact. The idea of buying their way out from organized crime vengeance with the money they stole FROM ORGANIZED CRIME...that's some really bad writing there.

Of course the big heist goes wrong, we don't get to see it as an audience because, this film is strictly low budget fare. But everything is just backwards and stupid as the film progresses. The group is in a get-away vehicle, with opposition on their trail. They have an injured member bleeding out in the back. It's stated multiple times that he's not going to make it and they can't carry dead weight with the plan to get to a pier. Except they don't go to a pier, they pull up in front of some house. They don't kill/dump the injured teammate, they start talking about getting him to a doctor/hospital. I'm like, ohhhhkay.

In the house they find two people tied up and sitting at a counter. Big red flag. The group doesn't care. One member goes to check the car for a tracker and finds one. She stated they were being tracked since the heist began. So, there's a rat in the group. No one cares. You would think that this would cause the group to move with some urgency, get out of the house, implement their escape plan? Right? No. They're meandering around the house like no one is looking for them. One of their number goes missing after being murdered by a vampire (yeah, it's absurd) and no one seems to care. The injured member of their team dies, then turns into a vampire. He's killed with a stake to the heart and a too long death sequence but there's still no urgency. The remainder of the group kinda just goes with it. They witness a cop getting carried away by a vampire that promptly rips her apart while airborne but these people STILL can't seem make a move to leave the house? They STILL can't seem to move with any urgency? Yet they're supposed to be combat specialists?

Wrong Place, Wrong Time is a really bad film. 1*, it's so bad I couldn't even have it on as filler while I was working on other things. It's annoyingly bad. Do yourself a solid and pass on this one.

aj rReviewed in the United States on October 6, 2021
1.0 out of 5 stars
Typical Low Budge Garbage
Verified purchase
IMDB 4.0, about 2x what it should be.

Prop master handling firearms for opening cut should be fired.

Starts off as a typical smash-n-grab shootout, getaway interrupted by some hardened criminal trying to tell a child covered in blood to suck it up and deal with it. OK. Right.

Then it goes in to paranormal BS with spoooooky dramatic music and who freakin' knows what is supposed to be going on after that.

Time better spent playing Minesweeper than losing braincells over this. I can only say that this is typical of about 97.4% of what Amazon so graciously gives us for free with Prime. Free, because that's what these films are worth: nothing.
3 people found this helpful

The Texas FamilyReviewed in the United States on October 12, 2021
2.0 out of 5 stars
Terrible, simply Terrible
Verified purchase
I couldn't make it past the first 10 minutes. The acting was terrible, and the effects looked like you gave a 15 year old some money to go make. Seriously, it starts in a shootout, and guns have zero recoil. There was a fascination with explosive blood from pistol rounds. I even laughed when someone's face was blown off by a 9mm. People standing still in the middle of the road with no cover shooting at copes 75 yards away behind vehicles, and you guessed it. The ones in the middle of the road are find, the cops behind the cars get shot. I tried, but I couldn't make it passed the first 10-15 minutes. This is a B move at best.
2 people found this helpful
See all reviews
Back to top
Get to Know Us
Make Money with Us
Amazon Payment Products
Let Us Help You
EnglishChoose a language for shopping. United StatesChoose a country/region for shopping.
© 1996-2022, Amazon.com, Inc. or its affiliates