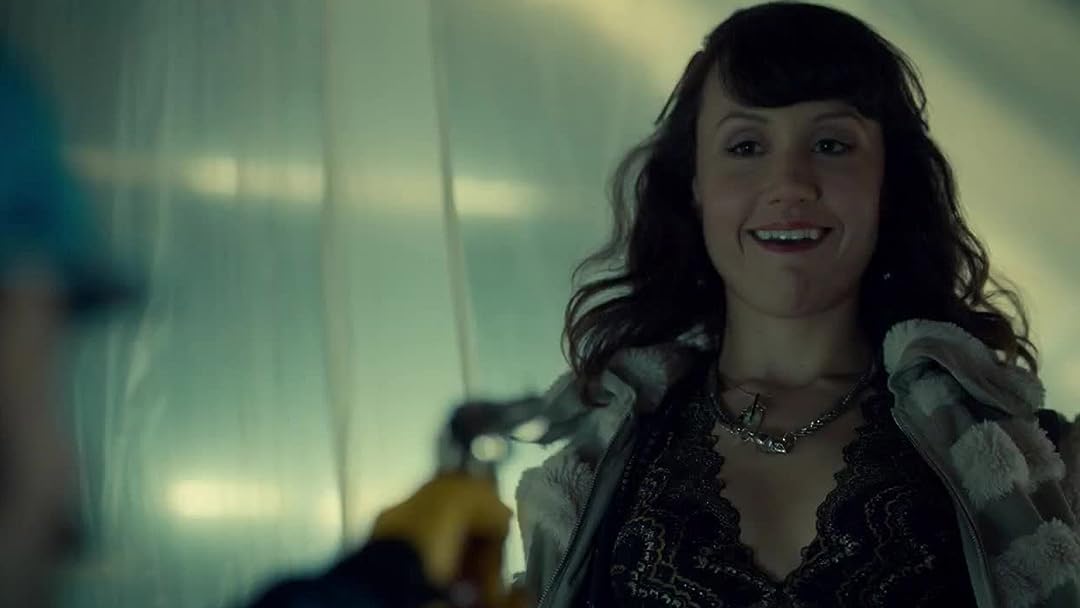 (591)
7.32016TV-14
Demon outlaws? Magic guns? Spiked coffee? Just another day at the office for motorcycle riding, whisky-slinging, fast-talking heroine Wynonna Earp. After a troubled adolescence spent in and out of juvie, she's returned to her hometown of Purgatory, hellbent on ending the family curse, which resurrects every one of the villains her legendary ancestor dispatched.

SomechickReviewed in the United States on July 25, 2016
5.0 out of 5 stars
Great show! Earper for life!
Verified purchase
For a Syfy show that at times doesn't take itself too seriously and has some goofy cheesy moments (Stupid Carl!), there are also a lot of meaningful themes portrayed by a great cast. This show is just a good time for the casual fan of this genre. You might go into it expecting fun fluff...you know with a badass female lead fighting demons with a glowing gun....but you'll also get a heroine that has a complicated history, difficult family relationships to work through, revenge vs doing the right thing, coming of age and realizing your true self...and more. The writing is witty, current, and there are truly some great lines in every episode. The characters are far from one-note. You'll hate the big bad one moment and have compassion for them in the next. I've heard the show described as Buffy meets Justified, and that's pretty accurate. If you get into the fandom, the cast is super interactive on social media, there are some great fan groups (@WynonnaFans) and podcasts (Tales of The Black Badge) to accompany the show, and everyone seems to have an overall good time. Highly suggest this show. Plus yeah...Wayhaught!
16 people found this helpful

RipleyMDReviewed in the United States on August 7, 2016
5.0 out of 5 stars
Give This Wonderful Show a Try!
Verified purchase
There are things I look for in movies and shows I love. Good writing is way up there for me but also characters I can relate to and character development. Also, good storytelling and acting. This show has all that in spades. Usually among the main cast there are characters I'm ready for the story to move on from, I'm impatient when they are onscreen because I'd rather be seeing other story lines. That is not the case with Wynonna Earp! For different reasons I love all the characters and their interactions with each other. The relationship that grabs me the most are the sisters - Wynonna and Waverly. They are so different but accept each other as they are and have a wonderful supportive relationship. It's a close call though, all the relationships bring something special to the mix (Wyonna/Doc/Dolls/Nicole/Waverly). In the next season I'd like to see more of Wyonna/Nicole, the episode that focused on them was one of the best. I've heard a lot of people compare Wyonna Earp to Buffy and I agree they are there. Comparing a show to Buffy is a really high bar to hit. Give this fledgling show a chance to grow into what Buffy did! I hope SyFy gives it a chance to do that. I'm hoping the show comes out on Blu-Ray at some point, I'd like to buy it in that format too.
5 people found this helpful

K. MarchantReviewed in the United States on June 26, 2018
5.0 out of 5 stars
A New Cult Classic
Verified purchase
A modern, weird western with a strong female lead that sends demons back to Hell with her famous great-great-granddaddy's gun -- what more could you want? WYNONNA EARP is a show that I'm glad I checked out, as it has become my new favorite show. I actually bought the entire season without having seen the show prior and, though I was worried that I wouldn't like it (even after reading the comics and extensively reading viewer reviews), I'm extremely glad I did, as I have enjoyed it enough to rewatch the first season.

First and foremost, I enjoy it's ability to tell a story with both drama and wit by using complex, yet flawed, characters. I know that seeing flaws within characters is starting to become apparent in film and television, but this show embraces these characters' flaws, as it makes up who they are and how they develop as heroes. The characters are, obviously, what makes WYNONNA EARP. The cast is awesome in taking on and embracing their characters and having wonderful chemistry with each other. I honestly can't imagine anyone else bringing Wynonna to life the way Melanie Scrofano has; she truly "gets" Wynonna's character. I also enjoy Tim Rozon's portrayal of Doc Holliday, as it is quite exceptional (right up there with Val Kilmer). Though I love all the characters, Doc is hands down my favorite character...which brings me to my next point.

The biggest appeal to me, overall, was the Wyatt Earp angle of the story. I like the fact that the show's overall concept is about Wyatt's great-great-granddaughter taking on a curse that was placed on his descendants and that she uses his gun, Peacemaker, in order to break the curse. The fact that Doc Holliday is featured within the show is the icing on the cake for me, as I have been fascinated with the real Doc Holliday for quite sometime, and his inclusion was how I found out about the show. I know this was a major appeal to my dad, as he also enjoys watching the show, too (and he typically doesn't get into genre television).

If any negatives, however, it is that some of the graphics can be quite campy and the show can be a little grotesque at times. It's something that can be distracting, but can also be easily overlooked after a few episodes. Some of it doesn't necessarily bother me, but I can see how it could be distracting to some viewers.

Overall, this is a show that I have enjoyed and try to recommend to everyone. If I had to briefly describe it to anyone, I typically describe it is a feminist version of SUPERNATURAL or SUPERNATURAL meets BUFFY THE VAMPIRE SLAYER. It's a show that couldn't have come on at a better time, especially with the rise of audiences wanting more diversity within film and television, as this show delivers on diversity. WYNONNA EARP is a show that delivers on both drama, humor, and heart. Ultimately, though, it's a show that will be, if it's not already, an eventual cult classic.

Chloe BirdReviewed in the United States on January 7, 2017
5.0 out of 5 stars
A good time...
Verified purchase
This show is just fun! If you like sassy, ass kicking female leads this show is one to watch. There is great chemistry between the leads (who are sisters) giving heart and force in equal measure. This show's premise is that Wyapp Earp was cursed and that each of his heirs will have to fight and kill all 77 of his kills or die trying. The newest Heir is Wynonna, a lost and deeply scarred young woman who returns home just in time for the fight. She, along with her plucky baby sister and a stone faced Marshal with a dark past fight to save themselves and to avenge the family that they have lost. None of the characters are perfect nor do they pretend to be; they are messy, destructive and not always likable but they are fun to watch. It is not high art (though the landscape is beautiful) or a show for deep reflection but it is a great ride and I am looking forward to a new season.
5 people found this helpful

Doc RakestrawReviewed in the United States on September 10, 2016
5.0 out of 5 stars
The most enjoyable new show of 2016.
Verified purchase
The most enjoyable new show of 2016. Bar none. It often takes one or two seasons for a cast and crew to really understand the characters and set ups they're dealing with. By episode two, this cast had fully assimilated their characters and just kept making things better. Demon haunted, Wynonna has to come to grips with her unexpected responsibility as the heir to the Earp family curse. Wounded by her past, uncertain of her future, she faces the demon army haunting the town of Purgatory with brashness, bravado and a wit sharp as a Bowie knife. Add sister Waverly, along with a new Marshall and a slightly older gentleman gunslinger, and the demons are in for a Hell of a fight. It's been a long time since I've been so thoroughly hooked by a new show. Can't wait for season two.
One person found this helpful

dimplesj4Reviewed in the United States on December 4, 2016
5.0 out of 5 stars
Add To My List of Fave Comic Book/TV series Heroines
Verified purchase
Love it!! Get past the 1st episode since the CGI or whatever special effect they use for the fight scenes are poorly done. It gets better though since I think they get rid of that special effect crap and go with actual physical, stunted fight scenes. Lead actress is phenomenal. Great plot with interesting premise. If you're not into sci-fi, fantasy or comic book heroes then it may not be for you. But if you are into that and you love sarcasm, a smart and bad ass female lead character (with a hot sister and equally hot girlfriend 😉) or if you're into guys, Dolls and Doc aren't bad to look at either. Then you'll approve of Wynonna Earp. Ecstatic there's a season 2. Can't wait!
2 people found this helpful

Wynonna Earp is relentlessly goofy. There's definitely a sort of grindhouse, Robert Rodriguez flair to the proceedings, but it's less From Dusk Till Dawn and more From Dusk Till Dawn: The Series. Which isn't necessarily a bad thing, but if you commit to watching this show, strap in for loads of hammy dialogue, overdramatic characters and cheesy special effects. That's not to mention the storytelling, which is convoluted as sin. The good news is, Wynonna Earp never takes itself too seriously and in fact relishes the absurdity.
2 people found this helpful
See all reviews
Back to top
Get to Know Us
Make Money with Us
Amazon Payment Products
Let Us Help You
EnglishChoose a language for shopping. United StatesChoose a country/region for shopping.
© 1996-2022, Amazon.com, Inc. or its affiliates