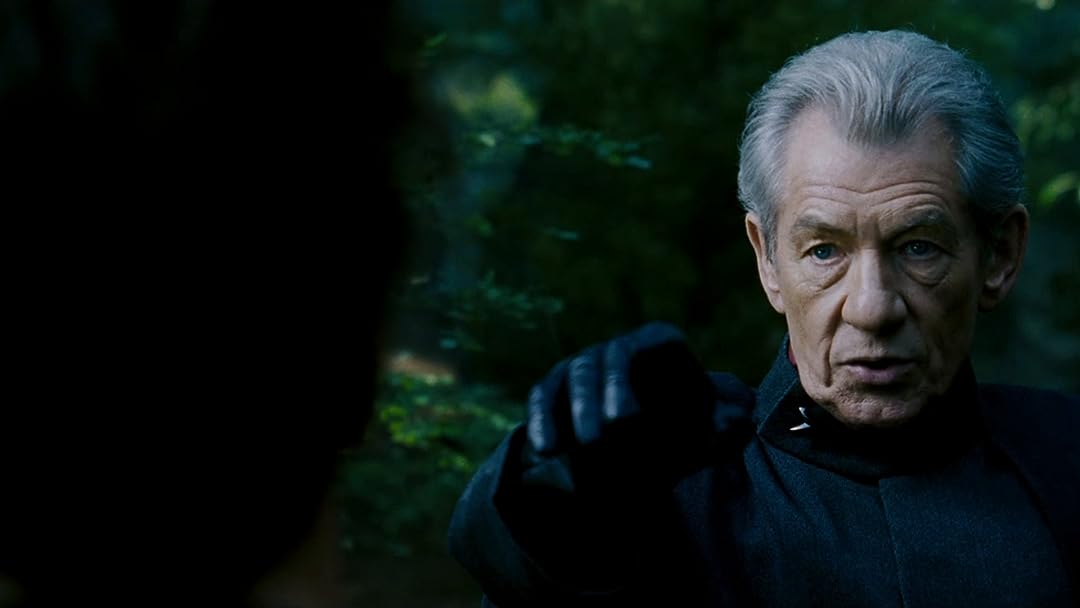 (9,568)
6.71 h 44 min2006X-RayPG-13
In the climax of the X-Men motion picture trilogy, a 'cure' for mutancy threatens to alter the course of history -- for the first time, mutants have a choice: retain their uniqueness, though it isolates and alienates them, or give up their powers to fit in.

joel wingReviewed in the United States on April 30, 2020
3.0 out of 5 stars
Story implodes with ridiculous climax
Verified purchase
X-Men Last Stand which was the first cinematic rendition of the Jean Grey/Dark Phoenix character. It was another rendition of the humans vs mutant story as the humans come up with a cure for mutation. The film had such great promise but just became a mess by the end.

Things start with a CGI’d young Professor Xavier (Patrick Stewart) and Magneto (Ian McKellen) visiting a very young Jean Grey in an attempt to bring her into their school for mutants. She immediately shows off her awesome powers by levitating all the cars in the neighborhood. That’s where there’s a cameo by Stan Lee. The scene would be revisited in the middle of the movie to dramatic effect.

The plot centers around the famous conflict between humans and mutants. The former fear the rise of super beings and create a serum that neutralizes the mutant gene. The government of course weaponizes the drug. Magneto believes this will mean genocide for his people and creates an army of mutants to counter the state. The X-Men are concerned as well and get caught between the government and Magneto. The moralism of this issue is actually brought up a few times in the movie and is important to consider.

In a bit of Marvel nerdery the Worthington Labs is the company that comes up with the serum. Worthington being the family of the Angel who makes a few cameos in the movie and who was one of the original X-Men in the comics.

There are great things in the beginning that showed the potential of the movie. For instance, the X-Men are in a training scenario in the danger room that includes Colossus throwing Wolverine in what’s called a fastball special in the comics to destroy a giant robot that is modeled after the Sentinels, machines created to kill mutants. Jean Grey played by Famke Janssen who died in the previous movie, also comes back to life, and kills her boyfriend Cyclops played by James Marsden.

There’s also some deft casting such as Kelsey Grammer as the Beast. His voice and demeaner is perfect for the character who is part genius.

Where things go wrong is at the end. There’s a huge confrontation between six X-Men and Magneto's army and it is so ridiculous, so unbelievable, so badly choreographed that it simply undermines the whole thing. How can a movie that started off so well go so badly?

Overall, the first 2/3 of X-Men Last Stand is great, and then that’s ruined by the conclusion.

Rhonda123Reviewed in the United States on October 5, 2019
4.0 out of 5 stars
Good
Verified purchase
okay. But WAY WAY WAY better than Dark Phoenix (2019) just Save yourself from the Finale. Twenty Year Franchise was Better Start to Right before the last one. I feel BAD for any newbie whom Saw Dark Phoenix but never invested in the 19 years worth of XMEN Shows that WERE Worth your time!
3 people found this helpful

Kindle CustomerReviewed in the United States on September 24, 2013
4.0 out of 5 stars
Decent Conclusion To The Series
Verified purchase
First off, it appears to me that anyone who has not seen the earlier episodes, will not enjoy this as much as the ones who have. The film has its own merits but lack of background on the "Mutants" (people with super powers) makes it pretty much like walking into the theater halfway through its running time. At any rate, there are, for those who are familiar with the characters, various opportunities to watch the burning and freezing powers, the super strength, mind reading, and bridge moving mutants, to label only a few types. There is even less room than in previous episodes for actors to show much individualized skill but the action scenes are entertaining, particularly in the free-for-all which marks the culmination of the series.
Overall, if you are starting the series, I would suggest going for the complete set. Those who have seen the first two should find this less engaging but nonetheless entertaining.
3 people found this helpful

Kyle GrellReviewed in the United States on November 13, 2021
5.0 out of 5 stars
I feel like this movie wasn't the last stand of the Xmen
Verified purchase
Mutants, action, and Ellen Page before she got her fancy new wang. What more could you ask for in a movie? How about Vinnie Jones playing Juggernaut? Or the insinuation that Hugh Jackman's character would stand a chance with the woman that was previously bumping uglys with James Marsden? That not enough for ya? Throw Jean Luc Picard in with Gandalf and Frasier Crane! I'm telling you, this movie has something for everyone.

Allen BerryReviewed in the United States on May 15, 2014
4.0 out of 5 stars
The Last Stand of 20th Century Fox's X-man
Verified purchase
The last, and perhaps not the greatest, of the X-Men films produced by 20th Century Fox. It suffers from the same flaw that most Marvel Comics film of the time period do: It's not a Marvel Studios Film. Nobody will do the character of the film the same justice as the home studios. It's just one of those things

Yet, it's not an awful film. I found it watchable and enjoyable. I loved the performances by Ian McKellan and Patrick Stewart as well as Ellen Paige and Hugh Jackman and Rebecca Romjin Stamos is always pleasing to watch, ahem. If for no other reason, watch this movie for the vast cast of mutants who make an appearance! Nevermind that the Juggernaut isn't really a mutant, but rather derived his power from a magical helmet. This is the kind of thing that gets lost in the process.

Well worth the time it takes to watch. You'll enjoy it... particularly Kelsey Grammar as Beast, heh.

BookMomReviewed in the United States on October 15, 2006
3.0 out of 5 stars
"Special" edition not worth price
Verified purchase
I was surprised at how much I enjoyed this movie when I took my son and his friends to see it the theater. I hadn't seen the first two at the time but, since then, have watched all three movies several times and find many things to like about them all.

If I was rating just the movie, it would get a solid four stars. But rating the DVD requires taking into account all the special features they did NOT include, but are holding out for a later edition. Does Fox not understand that it is insulting to the consumer to hear on the DVD Director's Commentary track about all the goodies that are going to be included on the DVD but are not? And there is really nothing about the Stan Lee edition that makes it worth the extra cost.

Back to the movie -- one can take exception with a lot of the choices made but, overall, it's a good time. Some things -- like the virtual absence of Cyclops, Rogue and Nightcrawler -- were apparently due to the fact that the actors were involved in other projects and only available for a short time. Unlike other reviewers, I didn't miss Nightcrawler at all, since he got very tedious very quickly in X-2. Other choices were the obvious result of the fact that Brett Ratner has the artistic sensibilities of a 13-year-old. Some of the dialog is just atrocious. (Wolverine's pep talk to the X-Men as they head into battle is enough to make once feel embarrassed for Hugh Jackman. Despite his incredible talent, even he can't bring it off without sounding ridiculous.) Halle Berry is (as others have said here) as wooden as she was in the first two movies. Famke Janssen has two really terrific scenes, but spends most of the movie walking around as if she's catatonic. Once Ratner and company set up the story of her immense powers, they were clearly stuck with the dilemma that, if she used her powers, it would obviate the need for the battle scenes with all the other mutants, which takes up a good third of the movie. But they didn't bother coming up with any compelling reason why she is just standing on the sidelines for most of the film like a goth Barbie doll. They could have expressed her inaction as the result of Jean Grey fighting to keep Phoenix in check, with Phoenix finally bursting free when under direct attack, but that would have taken the focus off Ratner's beloved CG effects.

Despite these flaws, the movie is not as good as X-Men or even X-2, but it is entertaining and somewhat emotionally satisfying, although not nearly as much as Ratner believes it to be (as he expresses on his commentary). For all the special features that this disc SHOULD have come with, I guess fans will just have to wait for, and pay out for, the next release. What a rip-off.
One person found this helpful

Dbell42Reviewed in the United States on February 8, 2021
4.0 out of 5 stars
Good find for money
Verified purchase
A good find for the money comparatively. Obviously opinions on this movie are not great but its a necessary part of the collection. And has a lot of enjoyable aspects for lovers of the wider xmen fanbase.

River ForrestReviewed in the United States on May 15, 2014
4.0 out of 5 stars
Great as usual but...
Verified purchase
X-Men: Last Stand was a great movie. The plight of our heroes continues on with a brand new and terrible danger that threatens to eradicate all of Mutant kind from the face of the earth.

The movie picks up roughly a year or so after the end of the previous movie. The X-mean have been mourning the loss of Dr.Gray, with Scott,of course, the most crestfallen.

As he ignores his teaching duties, and falls further into sadness, Scott decides to return to Alkali Lake. Leaving Logan to substitute teach in his place, he returns to the scene to find Dr.Gray (Pheonix) alive and extremely powerful. Let's just say things don't go to well for Scott.

Phoenix returns to her parents house where Charles and the newly escaped Magneto join forces in an attempt to take her back. Magneto has his own plan to deal with the new danger and Charles has his own way of fighting. Lets just say. Things don't go to well for Charles. (BAD BAD WRONG!) Big mistake in this movie.

Anyway without giving away too much in terms of spoilers, the movie was great but only a 4 star because bad things happened to Charles. The movie was likely meant to be the last ever X-Men movie. Silly producers. That never happens.
See all reviews
Back to top
Get to Know Us
Make Money with Us
Amazon Payment Products
Let Us Help You
EnglishChoose a language for shopping. United StatesChoose a country/region for shopping.
© 1996-2021, Amazon.com, Inc. or its affiliates