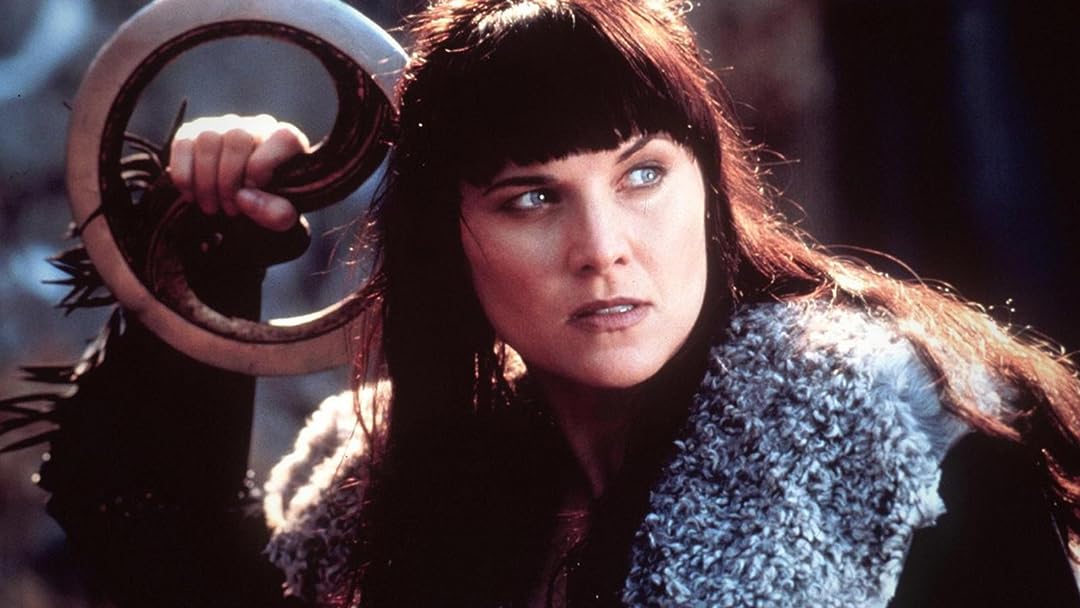 (1,188)
6.71996ALL
From critically acclaimed filmmakers Sam Raimi and Rob Tapert, Xena: Warrior Princess is set in the "golden age" of myth. The whims of capricious gods and the greed of human tyrants make her world a treacherous one. Pursued by the evil warlord Draco, Xena travels from town to town and battle to battle as she invariably finds herself caught between the innocent and the forces of darkness. Along the way she meets a high-spirited young woman named Gabrielle, whose fiery tongue and quick wit make her a worthy cohort, and together they travel and work to create a land that is free from tyranny and injustice. The statuesque and leather-clad Xena was first introduced in Hercules: The Legendary Journeys.

KaleighReviewed in the United States on June 18, 2020
5.0 out of 5 stars
I stan Xena & Gabrielle
Verified purchase
I adore this show with every fiber of my being. There's something so comforting about going back to re-watch Xena and Gabrielle travelling through ancient Greece; kicking butt and taking names.

Yes it's campy, and yes some things are problematic (I won't get into it but I'm sure you'll figure it out if you watch it). It was pretty low-budget, from what I can tell, so it's not a flawless production. But with that said, there is SO much to love about this show. Season one can be a bit tougher to get through because it seems like the writers were really finding their stride with the world and characters, but it's still so fun to watch. Xena's story arc is really compelling, and season one brings us the beginning of her friendship with Gabrielle. (But like, we all know they're hella married though, right?)

And who can forget Ares and his creeper-ness, or Joxer and his ineptitude, or Callisto and her bone-chilling shrieking thing that she does (and her general awesomeness as a villain)? The side characters are also what makes the show so fun.

AmazonAddict145Reviewed in the United States on November 6, 2020
5.0 out of 5 stars
In A Time Of Ancient Gods....
Verified purchase
Warlords, and Kings. The world cried out for a hero. Voiced by Don Lafontane. Lol, it's a dorky show from the 90s. But so great! Watching makes me think of a happier, simplier time. Everytime Xena does something to break the laws of Physics, it makes me smile. :-)
4 people found this helpful

VincentReviewed in the United States on July 2, 2017
5.0 out of 5 stars
Still Entertaining after More than Twenty Years
Verified purchase
Season one contains the quintessential episodes of the series. I hadn't watched them since they were originally aired and enjoyed them even more this time around. The choreography of the sword fights never ceases to amaze. The fun spin on Greek mythological events and characters is very entertaining, even to me as an author of a book on the subject. And I still wonder whether Xena's body armor was designed by Victoria's Secret Army!
6 people found this helpful

BellaReviewed in the United States on July 16, 2020
5.0 out of 5 stars
Corny, Campy, Silly, and Entertaining - - I still like it!
Verified purchase
If you're a fan of Sam Raimi's Evil Dead movies. Xena is also corny, campy, silly and entertaining, but medieval, gladiators and Greek Mythology. Lucy Lawless is great as the lead. She's serious and surprisingly funny. Renee O'Conner is the perfect sidekick, but can be annoying at times. I love the character Joxer. Funny, and annoying. But, still good chemistry.

Season 1 is a good, addicting, action-packed show if you're into this genre. Seasons 2-3 were good but storylines started to decline by Season 5. Season 6 - Eeeh!

Huntress (I hunt books)Reviewed in the United States on June 28, 2014
5.0 out of 5 stars
An Australian Bartender in real life becoming a battling warrior princess on the screen
Verified purchase
Xena is played by Lucy Lawless. She is beautiful, brave, and daring. This first season is jam packed with action. All 24 episodes from the first season are in here. Full Screen version. 17 hours and 39 minutes long. She used to be a vicious warrior princess. Now she travels the roads helping the innocent and trying to make amends for her past bad deeds. Her devoted friend, Gabriella (Renee O'Connor), rides by her side. She is a compassionate girl who hopes to be a warrior one day like Xena. In this set, Hercules (Kevin Sorbo) is a guest star. This is a combination of mythology, fantasy and martial arts. A great female action hero. This is a five disc set.
8 people found this helpful

Pei KangReviewed in the United States on September 28, 2006
5.0 out of 5 stars
I forgot how good most of the seasons were
Verified purchase
After finishing watching Xena for the first time in years, I found myself enjoying it a bit more than when it first came out.

The best things about Xena: 1) is her character. 2) Yes, I'll admit it, being a guy, two beautiful women stars help too :).

Back to her character: She has a well-thought out, well-developed fullness. She is rich, vibrant and dark. She is far better than her counterpart, Hercules. She is a woman version of Batman, well, zans the cape and cowel. She has personality, strength of character, she is quick thinking, above all, she is HUMAN. She has problems, and she has human puzzles, obstacles to deal with. When she can't use brute strength (though she uses it 80% of the time), she uses her WITS and her ability to be flexible to overcome her challenges. (unlike Hercules, the brute strength man)

She has lots of redeeming features which I can't write down all in one review to make her a person well worthy to cheer for.

Xena's action is well done, and far more realistic than Hercules. The serious overtone of the battles and Xena's atmosphere in general sinks in quite well. The best action takes place when they set up fortifications and defense of towns and people, that shows her skills and strategies. Heck, even Gabrielle shows her stuff. It's got different quirks, and even puts the Heroes in different situations: like, when Gabrielle freezes in combat...I think that's realistic and WOW....shows the humanness of it all. Or how even Xena or Gabrielle doesn't always have a solution to solve the problem in combat, or out of it. Xena often thinks of ways on the fly.

Most of the plots and storylines were fine, and always entertaining. I even liked the one where Gabrielle attends Bard school. Though, I find HER very annoying, the episode was fun.

my favorite side characters had been and still are: Autolycus, the "King of Thieves", Salmoneus the merchant and Joxer "the Mighty" The chemistry between Autolycus works far better with Xena than Hercules.
they make the show's stars well worth watching...and even makes me want to buy the rest of the series so I can watch for those characters specifically.

Now, to the minor problems:
I didn't know the Gods were so weak and helpless. Hera seemed much more deadly to me. She usually has better plots, guards to deal with such pesky heroes...:).

As for other Gods...
I don't recall the episode title, but when Death comes to the King's castle to "claim" him, he manages to capture her in a weak mechanical trap?

Hades, who is also a God, who can bring people to life and such, appeals Xena for help? What???! And, when Death is freed, she doesn't kill the old King who she came for in the first place? Did I miss something here?

Or, when Hades has his Helmet of Invisibility stolen...what, he can't stop a mortal? Hmm. I guess I should brush up on my Greek mythology, but that just doesn't seem too all awe-inspiring to me. I understand the Greek Gods were supposedly like humans in most aspects, but they were also very all powerful. The only aspects in which they were humans, were their emotions, and pettiness.

Also, the Titans in the episode: The Titans. I thought they had more power than just "being big". Oh well, maybe that's just me.

But, on a lesser note, I couldn't STAND Gabrielle or Callisto. Callisto is an overdone-over-cliched "I hate the Heroine" character, which needed to be fleshed out over seventeen episodes, WHY? As if Xena doesn't have enough guilt to dwell over?

That said,
Xena is a far superior show than Hercules.
3 people found this helpful

R. SorrowReviewed in the United States on January 6, 2018
5.0 out of 5 stars
Awesome beginning to a great series!
Verified purchase
When Lucy Lawless first played Xena on Hercules, I had a feeling a spinoff was on the horizon and sure enough,it happened! This first season was fantastic, The highlight,for me, was Kevin Sorbo & Michael Hurst appearing in the episode Prometheus,but the whole season was great! I recommend this for all Xena fans!.
4 people found this helpful

Just today i got this in the mail. I really cant complain about the fact that are no special features because the first dvd did have quite alot and I never really saw them. This set is much smaller than before and is the size of a normal dvd case. Ive read reviews where people complain about resolution on this dvd but people must understand that this season was filmed on 16mm which means it will be grainy, with that said however, it is much less grainy and better in picture then from the other dvd. Also, this DVD has SUBTITLES!!!!!!! Something never seen before on a xena dvd. So, is this a great DVD? Yes. But, if you already own the other dvd, i see know point in buying this. Unless your like me, a die hard fan, you need to have both. So i have the orginal dvds (1-6) and now i have the new dvd(1) and when season 2 comes out in March(?) ill buy that as well. So all in all, if you dont have season 1, or if u do and just want this like me, buy it. Also, if u never heard of xena in your life and somehow stumbled upon this, BUY IT! i garrentee you will love this show!
8 people found this helpful
See all reviews
Back to top
Get to Know Us
Make Money with Us
Amazon Payment Products
Let Us Help You
EnglishChoose a language for shopping. United StatesChoose a country/region for shopping.
© 1996-2022, Amazon.com, Inc. or its affiliates