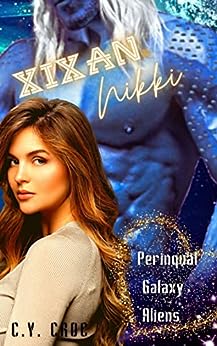 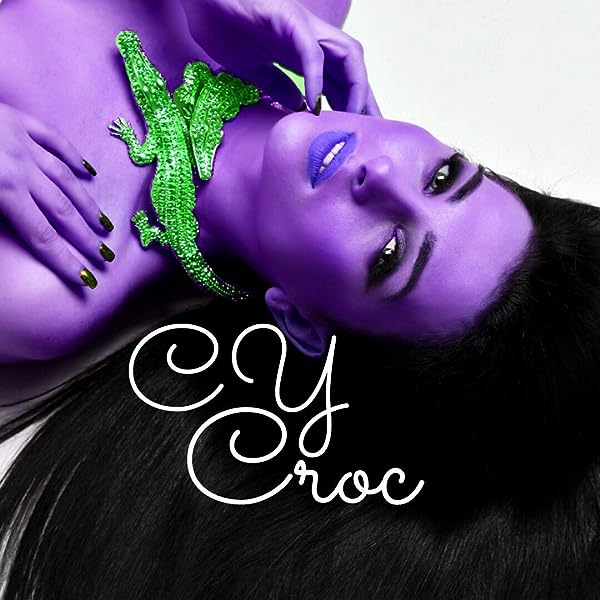 Xixan is a blue, bad ass ballsy alien. Nikki is a petite, pretty, perfect human. It's not meant to work - but it just does!

After a tragic accident claimed the lives of her son and husband, Nikki thought life couldn't get any worse.

That was until she's abducted by a group of vile Taraquets - short rodent faced aliens with blood-red evil eyes.

But then she's auctioned off along with nine other human females on an unknown planet.

The Cagodian kills the Brizzoks in self-defence but finds he is now the protector of the small fragile female until he can get her back safely to Federation Headquarters.

Will Nikki ever see Earth again? Will she want to? Xixan is a very accommodating alien host!

"I might not be everyone's cup of tea, but I'm somebody's mug of coffee!"

C. Y. Croc loves science fiction and owes this mainly to Sci-Fi TV, films & comics while growing up. Judge Dredd and Blade Runner were just some of the influential scifi elements to stoke her already rampant imagination, paving the way to a writing career later in her life. She's always felt an affinity with life forms other than humans.

The universe she's building is currently a misogynistic one, however she has feisty females fighting for change in every book.

She knows that like art, stories can be subjective. What can be appealing for one person can be unappealing to another.

So she hopes you have a happy few hours getting lost in her art! ; )

Betty H
2.0 out of 5 stars Tropey and Boring
Reviewed in the United States on February 7, 2022
Verified Purchase
I'm always willing to read a new alien romance so when I spotted this freebie novella, I thought, "why not?"
Now that I've finished it, I have a few things on my mind. This book wasn't bad, but neither was it very good. It was pretty tropey and boring. If it had been a longer novel, I probably would've DNF'd it because there's only so much disbelief I can suspend. I get that this is a sci-fi romance, but if the author is going to make up an alien world with completely different words for time and body parts, how can the hero still be wearing pants, but not know what underwear is? Or how can the heroine (who was apprently a botanist) acknowledge she's on a planet with completely alien flora and yet not hesitate whatsoever to shove plant leaves into her mouth to chew?
The tropes (so many of them) were pretty packed in there: forced proximity, alien auction, claiming mates... it's all kind of jumbled together and made to fit as best as it can.
It's not quite "read at your own risk" but there it is.
Read more
4 people found this helpful
Helpful
Report abuse

Cat H.
4.0 out of 5 stars Very good beginning to a series
Reviewed in the United States on September 27, 2020
Verified Purchase
This is the opening story to a series of novellas.

It gets four stars because the writer's world building, character development, and plot building skills are great. It plops you into a universe of human-like and not so human-like aliens armed with strange new weapons, fighting predatory monsters to survive. The motivation and motivations of the characters are mostly believable. The story moves at a fast pace, and -- as long as you can accept the insta-lust/insta-love trope -- arrives at a satisfactory HEA for Xixan the alien and Nikki his human mate. Altogether, it was interesting enough to convince me to buy the second title in the series, "Samantha."

Kindle Customer CarmenB
4.0 out of 5 stars Hmmm
Reviewed in the United States on December 29, 2020
Verified Purchase
The alien rescues kidnapped human female and sold at an auction storyline is getting old. There are only so many ways to spin the story and after a while they all seem like same old, same old. I did enjoy the character of Xixan but Nikki disappointed me. I’m going to try the next book in the series in hopes that one of the other girls is more feisty and interesting.
Read more
2 people found this helpful
Helpful
Report abuse

SaraM
VINE VOICE
5.0 out of 5 stars Xixan and Nikki
Reviewed in the United States on October 12, 2020
Verified Purchase
This was a very well-written book 1 in the Perinqual Galaxy Aliens Series that I really liked. It had exceptionally crafted characters that worked well together. The story and characters engaged me throughout the book. I loved the characters while watching them grow. I found this book fascinating with great word building which made me feel apart of the story as it unfolded in front of me. A must read for any fan of Alien Romance and it had many twists/turns, deceptions, action, adventure, betrayal, and love

L. Nunn
5.0 out of 5 stars A great start to a new series by a new to me author!
Reviewed in the United States on January 1, 2021
Verified Purchase
I enjoyed reading this story, beginning of a series actually, by an author who is new to me. I found the buildup and exposition to be clear and easy to follow. I loved the characters, Nikki especially was clearly developed and easy to like. Xixan is a likable alien and their adventures were spicy as well as violent enough to keep my interest. The plot is easy to follow and I'm looking forward to reading the rest of the series.
Read more
Helpful
Report abuse

jenny7
3.0 out of 5 stars so so
Reviewed in the United States on January 15, 2022
Verified Purchase
The story of Nikki and Xixan was ok. There were some grammar and spelling errors. I couldn’t quite get past the fact that the author used “cooch” for the woman’s vagina. She had some inventive alien words, she could have come up with something for that area. It wasn’t bad though for a quick alien read.
Read more
Helpful
Report abuse

Zenda
1.0 out of 5 stars No
Reviewed in the United States on March 2, 2022
Verified Purchase
There were so many things. The characters, the situation itself, the fact that the author switches out some words like cake for one she has made up, but uses an idiom specific to English speakers. Not a story or author I will be reading again.
Read more
Helpful
Report abuse

HPgirl
4.0 out of 5 stars Good read
Reviewed in the United States on July 21, 2021
Verified Purchase
A nice quick read. I'll probably read the others since it was set up in a good way. Wish it was longer though!
Read more
One person found this helpful
Helpful
Report abuse
See all reviews

Hayley pearce
5.0 out of 5 stars Brilliant
Reviewed in the United Kingdom on September 26, 2020
Verified Purchase
A fantastic thrilling story that kept me turning the pages. Love, loss, action, lust. What more could you ask for? An amazing book 1 to start the Perinqual Galaxy Aliens series with. Can't wait to read book 2! C. Y. Croc is now one of my favourite sci-fi romance authors.
Read more
Report abuse
See all reviews