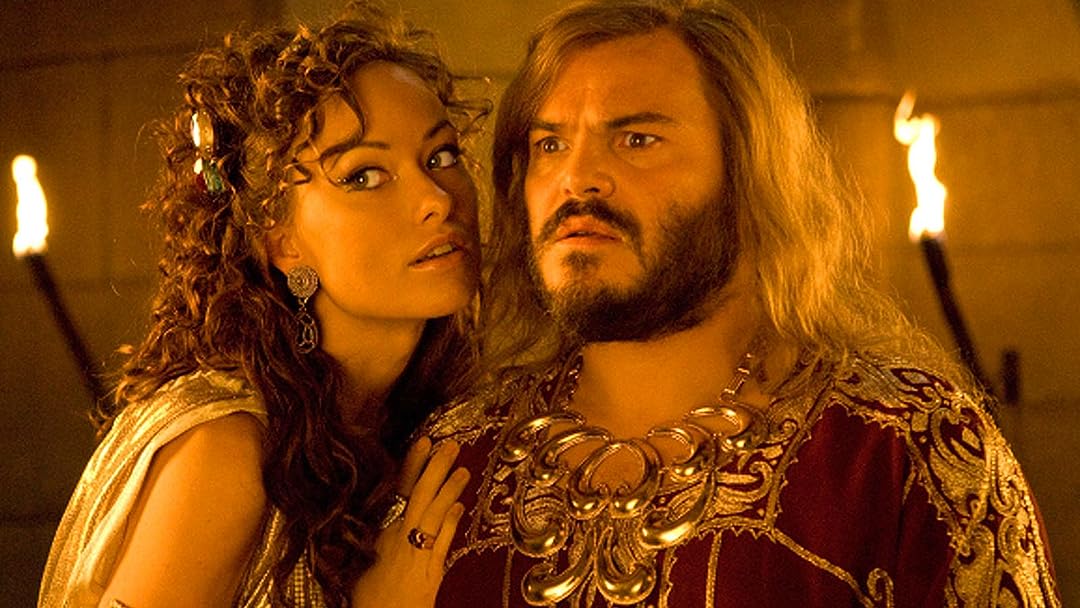 (2,434)
4.91 h 39 min200913+
When a couple of lazy hunter-gatherers (Jack Black and Michael Cera) are banished from their primitive village, they set off on an epic journey through the ancient world. Directed by Harold Ramis.

Truth Be ToldReviewed in the United States on April 27, 2019
1.0 out of 5 stars
Trivializing the Bible
Verified purchase
This movie should've just stuck to it's fake hunter-gather theme. So where do I start... Essentially, this was an attempt to mock the Bible. So white people apparently represent the beginning (year one) and the end (through Sodom and Gomorrah) in this movie and mixes and meshes history as usual. Year one appears to take place in a tropical place (apparently where there are exotic African animals) in the Garden of Eden--yet no black people are in this utopian idiotic society though you'll find two token black people later in the film who agreed to be in the background; when their Year One was I guess we'll never know in this sadistic film. You have a white cave man dressed as an African witch doctor chief (or perhaps the new blackface?). Jack Black, a random cave man is supposed to be like Adam eating from the tree of knowledge--and I'm guessing his effeminate friend represents Eve though it was Jack Black, not the wanna be Eve, who tries to tempt Eve wanna be into eating from the tree? Perversion on so many levels. Apparently, there was no consequence to him eating from the tree--perversion. Only that his being accident-prone causes his people to go into slavery...into Sodom and Gomorrah? Perversion. But before he journeys through time to visit the "people of the Bible" he comes to the realization he's "the chosen one" to save the people he accidentally caused to be enslaved? Perversion. Everyone who represented the so-called people of the Bible were white folks? Perversion. Sodom and Gomorrah was predicted to be destroyed by fire in the movie (an attempt to try to stick to the Bible?) but then never was in this film? Perversion. Everyone at the beginning of the movie were wearing animal skin covering before Jack ate from the tree of knowledge of good and evil. Why? Perversion. The co-main character was in love with his sister before and after Jack ate from the tree? Perversion. That one word sums up this movie--Perversion.
23 people found this helpful

Raisuli the MagnificentReviewed in the United States on April 29, 2019
1.0 out of 5 stars
Not funny.
Verified purchase
I laughed maybe three times at most. Most of this junk was written by marketing psychologists.

It's a ":comedy" that's full of body function, sex and human waste gags.

The idea is that young teenagers and preteens will laugh at the humor, or get into it, and then take home the more salient message of questioning authority.

The problem here is that the movie is tasteless, and questioning authority doesn't need to be adorned wit jokes about fecal matter, urine, castration, and whatever other tasteless or crude humor topic you want to throw in there.

On the upside Jack Black gives a good performance, but otherwise this is more forgettable than the film he did about the Mexican wrestler, and far worse than his better films like his take on Gulliver's Travels or the School of Rock.

EvaReviewed in the United States on April 14, 2019
1.0 out of 5 stars
This movie is offensive...
Verified purchase
Not for kids. I have no idea who would think this was funny. It's just terrible! Parents, please watch this before you let your teens watch it. It should be rated R.
20 people found this helpful

M. J. HarperReviewed in the United States on April 22, 2019
2.0 out of 5 stars
Amateurish and elementary - possible spoilers.
Verified purchase
Part of me wanted to like this movie because I had a lot of hope for Jack Black and Ramis. I was way wrong; I gave two stars for the good acting - it might have been a cheap movie, but the actors did a good job (and I was surprised to see so many familiar faces!).

The story...was utterly childish. It was like someone found an online list of questions about the Bible and made a movie of it - a list that had been answered and put to rest ages ago (no pun intended) - but instead of seeking the answers someone just wanted to perpetuate the questions. I don't hold anything against the actors - they're actors, they were being paid to do a job, simply put.

The movie itself seemed to be of decent quality; what homework was done on the historical part of things wasn't to horrible. One part that did bother me though were the virgin sacrifices in the fire of the statue of Molech (the bull in Sodom); in the movie, drums start playing loudly and people start cheering loudly as well, which was great (because that was historical, which was a nice surprise for a movie like this), but the virgins were grown women who seemed to be okay with being the sacrifice. The reason this bothers me is because in reality it was children who were sacrificed (felt like this movie was making light of such a horrible practice); a fire would be made in the belly of the statue and the hands of the statue would heat up (the one in the movie doesn't have hands), the children would then be placed on the hands and basically get cooked alive - drums would play loudly to drown out the screams so the parents wouldn't have to hear their kids' cries. Really horrible stuff. There are lots of misrepresentations in this movie, though.

The "comedy" in this movie is sophomoric at best - mostly elementary, really. Early on, Jack Black is cooking (a rabbit?) on a stick, and holds it up while asking what it looked like... I actually laughed at that - not because I thought it was funny, but because I was sitting there wondering how a grown man could still think something that childish is funny. It was, like I said, elementary.

I think the humor is more cringe-inducing than funny (the entire reason I watched this movie was because it somehow got 4 stars) - there's no way this movie is 4-stars-good. The guys talk about a girl one of them is in love with, while watching her stroke a couple of spears (yeah...); Jack Black tastes human feces to help him better track some people down (somehow), which then turns out to be bear feces I guess; Oliver Platt has an odd fetish as a pagan Sodomite priest who likes to be rubbed down with oil by Michael Cera...you can tell it was intended to be funny, but like I said, most of the comedy in this movie is more cringe-inducing than funny.

Overall I gave the movie two stars, because the actors did a good job at acting. They were just the victimss of really bad writing and story-telling.
4 people found this helpful

Chris MathewsReviewed in the United States on September 23, 2021
5.0 out of 5 stars
Fun, fun and more fun!
Verified purchase
I didn't have any real idea of what this film was about going in, I had only heard some bad reviews. Well, after getting about half way through and having a lotta laughs, I figured out why it had some bad reviews. People don't like it when they are being made fun of. If it's their ideology (Christian and Victimology alike) that is the brunt of the joke they're going to be offended even if it is spot on. Regardless, the cast is great, the jokes are awesome, the sets, costumes and cinematography are great. This movie is fun, period.
One person found this helpful

Alex SherryReviewed in the United States on September 28, 2016
5.0 out of 5 stars
Watch this move two times
Verified purchase
Suspend the belief that cave men talk like yuppies and you will get a kick out of this film.
I laughed from the opening credits (full disclosure - Big Jack Black fan).
All the characters have their moments with funny dialogues, even ones with 1 minute on camera (witch doctor describes Black's problems with "you really F#$% the pooch on this one"). This is one of those movies that is funnier the second time because of the many one liners from every member of the cast. Dialogue sounds like a Stand Up comedy routine at a club.
Jack and Michael Cera are great together and carry this movie to a 5 star comedy.
The Miami Greek
15 people found this helpful

BeckyReviewed in the United States on April 13, 2021
5.0 out of 5 stars
Get the unrated version
Verified purchase
it's so much funnier I used to own a dvd with both rated and unrated on it, but I lost it now whenever I see it somewhere for free it's the rated version which is funny but really missing some great parts! I ABSOLUTLY love this movie I LOVE Jack Black , he has a direct line to my funny bone. I could watch this movie over and over again and not get tired of it, me and my husband quote this whole movie to each other constantly it is so funny. I have actually bought this movie several times because we love it and lose it all the time! but it has to be the unrated version!

R.H.Reviewed in the United States on February 6, 2021
1.0 out of 5 stars
Not as funny as anticipated.
Verified purchase
The “One” in the title is definitely the movie rating because it is for the most part not funny at all. Kept waiting for comedic scenes to occur but all the movie offered was offensive depictions more in line with degeneracy of a social climate era therein. However, I decided to watch it to the end because of the actors in it, but am glad I saw it when it was included with Prime as the movie is not worth it, making viewing this a waste of time. And another thing, this film should have been rated R or for Mature audiences for its adult themes, and contains many sexual references throughout.
One person found this helpful
See all reviews
Back to top
Get to Know Us
Make Money with Us
Amazon Payment Products
Let Us Help You
EnglishChoose a language for shopping. United StatesChoose a country/region for shopping.
© 1996-2022, Amazon.com, Inc. or its affiliates