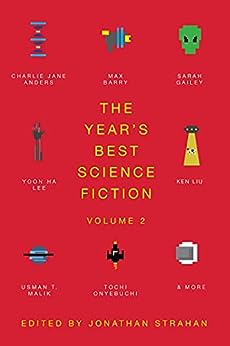 With short works from some of the most lauded science fiction authors, as well as rising stars, this science fiction collection displays the top talent and cutting-edge cultural moments that affect our lives, dreams, and stories. These brilliant authors examine the way we live now, our hopes, and struggles, all through the lens of the future.

An assemblage of future classics, this star-studded anthology is a must-read for anyone who enjoys the vast and exciting world of science fiction.
Read more
Previous page
Next page
Due to its large file size, this book may take longer to download

Jonathan Strahan was born in Belfast, Northern Ireland, in early 1964. He moved to Australia in 1969 where he in short order helped to fight a bushfire, shook hands with an astronaut, and became convinced he’d become a geologist and live on Mars. It’s not surprising that he fell in love with science fiction early, or that he spent far too much time reading. He went on to graduate from college with an interesting but not particularly useful arts degree, but had met people that led him directly into science fiction itself. He coedited and copublished Eidolon, an award-winning Australian semiprozine, in the 1990s before starting to work for Locus in 1997. That led directly to Jonathan becoming a reviewer, and going on to edit nearly 100 books. He has won the World Fantasy, Aurealis, Ditmar, and Locus Awards, and has been nominated 15 times for the Hugo Award. He is also the cohost and producer of the Hugo Award–nominated Coode Street Podcast. He still lives in Western Australia with the former managing editor of Locus and their two children. --This text refers to an alternate kindle_edition edition.

D. Garber
5.0 out of 5 stars Fantastic stories!
Reviewed in the United States on July 16, 2022
Verified Purchase
I'm halfway through this anthology, and maybe one or two stories haven't held my interest so far. So many good, fun, interesting stories are presented here. From a live-saving pillow, to thespian robots, to a neurotic Super 'hero', these stories are more on the entertaining side than the intellectual side.
Read more
Helpful
Report abuse

Bree
5.0 out of 5 stars Great book full of great stories.
Reviewed in the United States on April 28, 2022
Verified Purchase
This is a compilation of the best science fiction stories of the year. Vol. 2. Very well selected stories. I love the short story format, and this is one of the best book groupings I've read.
Read more
Helpful
Report abuse

driftless
4.0 out of 5 stars Much better than vol. 1
Reviewed in the United States on February 28, 2022
Verified Purchase
Authors in this volume crafted creative pieces without the need to include a slice of themselves as exhibited in the first volume.
Read more
Helpful
Report abuse

LaMartin
5.0 out of 5 stars Son in law is a Science Fiction fan. He reports this book has great stories
Reviewed in the United States on August 18, 2022
Verified Purchase
Great gift
Read more
Helpful
Report abuse

Lauren S.
4.0 out of 5 stars Excellent collection of the year's best SF short stories
Reviewed in the United States on October 2, 2021
I adore short story collections, and I was particularly impressed by last year’s anthology edited by Jonathan Strahan. It follows the same format as last year, with the editor’s introduction including other recommended reading as well as general comments on the state of the publishing industry in 2020. And then we get into the real meat of it: 27 short stories that are, arguably, the best of the year. While some stories missed the mark a bit for me, they were all well-written and interesting.

“well they’re all good dogs
even the naughty ones”

The collection starts out with the absolutely amazing “A Guide for Working Breeds” by Vina Jie-Min Prasad. Can you die of cute? This is a story told mainly through chat transcripts between a robot mentor and its new mentee, and features so many dogs. Adorable, original and uplifting, this is one of my favorites in the collection. Also hitting high on the adorable scale is Timons Esaias’s “GO. NOW. FIX.” which stars a robotic pillow in the shape of a panda and a plane crash (just trust me on this one). And if you’re looking more for satire, “It Came From Cruden Farm” by Max Barry, about a newly inaugurated president who discovers that aliens exist, had me in stitches.

“I feel like I’m watching the Ten Commandments being written here, and unless I say something, a burning bush is going to be gendered for the next two thousand years.”

For more classic scifi, Yoon Ha Lee’s “The Mermaid Astronaut” is a gorgeously evocative retelling of The Little Mermaid. I’m still not sure how he fit so much emotion in to so few pages. I also adored the scifi romp of Gene Doucette’s “Schrödinger’s Catastrophe.” It had all the feels of some of my favorite TNG episodes, plus some hilarious absurdity mixed in with a tightly-paced action story. “Burn or The Episodic Life of Sam Wells as a Super” by A.T. Greenblatt is about Sam, who’s recently discovered he has the completely useless superpower of setting his head on fire. In a society where most Supers go live out their days in seclusion, Sam instead decides to join the local Super team and help people… only it’s not exactly what he thought it would be like. This is a lovely story about accepting yourself.

“She frowned at the ham on the counter. “Are you behind this?”
“Why are you talking to a ham?” asked Donna. “That’s just weird.”

Of course, where would we be without a lot of whizzbang scifi goodness, from the titular weight loss treatment in Meg Elison’s horrifying “The Pill,” to the devices in “Don’t Mind Me” by Suzanne Palmer which make kids incapable of remembering certain things they hear, like swear words and that pesky climate change, to how cryptocurrency and AR can fix pollution in “The Suicide of Our Troubles” by Karl Schroeder, to AirBnb for bodies in Sameem Siddiqui’s “Airbody.”

“I’ve never done so much math in my whole entire life.”

And then there’s the ones that truly made me think. I’d previously read Marian Denise Moore’s “A Mastery of German” and found its exploration of ethics and racial memory just as fascinating as the first time. But the winner of the most thought-provoking goes to “How to Pay Reparations: a Documentary” by Tochi Onyebuchi. I’m still chewing over that one.

Overall, another excellent collection, and after two stellar anthologies, I’ll definitely be putting future editions on my autobuy list.

I received an advance review copy of this book from NetGalley. This does not affect my opinion of the book or the content of my review.

ReaderOfBooks
5.0 out of 5 stars lots of pure science fiction goodness
Reviewed in the United States on December 2, 2021
"The Year's Best Science Fiction Vol. 2." edited by Jonathan Strahan is with out a doubt correctly named. This collection of 27 science fiction stories published in 2020 by some of the best authors was very enjoyable to read. The preface "Year in Review: 2020" written by Strahan was rather amazingly detailed and informative, but the rest was pure science fiction goodness . It feels unfair to point out individual stories without mentioning all of them. But here we go. The creative ability of sentient AI as the protagonist made for really interesting reading in "A Guide to for Working Breeds", "Drones for Plowshares", "Polished Performance", "Go. Now. Fix", "The Final Performance of the Amazing Ralphie", "The Suicide of our Troubles" , and "Sparklybits". The biopunk meets cyberpunk stories were had the perfect level of gritty realism in "How Quini the Squid Misplaced His Klobucar" and "The Transition of Osoosi". The role of the alien was amusingly entertaining in "It Came From Cruden Farm". Other stories include thoughtful and sometimes terrifying new technologies, more than human than human metallic robots, deep thoughts on the nature of reality, and of course a few tales of good old fashion space opera.

This collection introduced me to a number of authors whose books I look forward to actively obtaining and reading.

Many thanks to the editor, authors, and publisher for providing an advanced electronic review copy!
Read more
4 people found this helpful
Helpful
Report abuse
See all reviews