You've subscribed to The Year's Top Hard Science Fiction Stories! We will preorder your items within 24 hours of when they become available. When new books are released, we'll charge your default payment method for the lowest price available during the pre-order period.
Update your device or payment method, cancel individual pre-orders or your subscription at
Your Memberships & Subscriptions
There was an error. We were unable to process your subscription due to an error. Please refresh and try again. 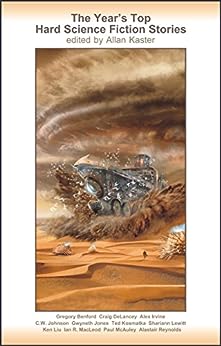 New releases
Explore popular titles in every genre and find something you love. See more
Books In This Series (5 Books)
Complete Series 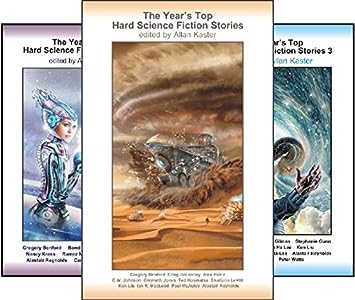 4.0 out of 5 stars
4 out of 5
42 global ratings
How are ratings calculated?
To calculate the overall star rating and percentage breakdown by star, we don’t use a simple average. Instead, our system considers things like how recent a review is and if the reviewer bought the item on Amazon. It also analyzes reviews to verify trustworthiness.
Top reviews

medfair
5.0 out of 5 stars Mostly very good and refreshing
Reviewed in the United States on August 11, 2018
Verified Purchase
Having been reading a lot of new SF/Fantasy genre, I expected very little. I was pleasantly surprised. This collection of short SF stories is mostly very good, and some are really excellent. The only bad piece is Of The Beast In The Belly. It is so bad that I do wonder how the editor decided to include it in this collection (unless it is under the Editor's Nom De Plume). The Seven Birthdays start extremely well, but has a problem how to end itself, as many other short stories do. Sexteen Questions is well written, but its unmitigated put-down of academia, emphasizing its learned stupidity, is rather far fetched. Number Nine Moon again starts very well but ends clumsy. Chasing Ivory is one of my two favorites. Very well constructed, good lyrical prose, and believable. Something Happened Here... is well written but has the obvious problem of pretty much all SciFi. There are three ways to describe something alien and ununderstandable: 1. Painstakingly try to explain every manifestation in scientific/pseudoscientific terms-tedious to say the least; 2. To write as if everything is obvious, except the reader is too dense to understand the tech or the spirit of the fantastic world that the author created-usually results in a moronic pseudosci/tech/spiritual babble; 3. To write in such a way that the context explains the phenomena without seeming to do it - This is really the mark of the great writer. This story is well written but takes the second method and therefore fails. Red King is a very good detective story placed in a cyber world. Vortex is sort of echo of Odyssey 2001, but again ends quite lamely. The Visitor From Taured is another best choice. Excellent prose, great concept, and fabulous ending. Bravo! The Seventh Gamer takes the third place, being a new twist on the gamers VR world. Very very clever. And finally-Fieldwork, well written in a Ursulesque style and very enjoyable.
Read more
5 people found this helpful
Helpful
Report abuse

Rhonda A. Atlanta
5.0 out of 5 stars Good reading
Reviewed in the United States on June 14, 2020
Verified Purchase
I accidentally re-bought the book and ended up re-reading all of the stories, thought I had read them previously. All worthwhile and a great way to while way the hours.
Read more
Helpful
Report abuse

Michael J. Tierney
3.0 out of 5 stars Not a lot of good stories.
Reviewed in the United States on January 28, 2021
Verified Purchase
Subsequent volumes were somewhat better but one really can only rely on "Best of" collections covering several years or on Hugo award winning collections.
Read more
Helpful
Report abuse

Coeurl
5.0 out of 5 stars To Editor: Please Expand Anthology--20 stories would be great!
Reviewed in the United States on December 14, 2018
Generally solid hard sci fi (sorry if the term "sci fi" offends anyone, but I've been calling it that since I began reading science fiction as a kid in the 70's), though not all truly hard. I'd say my average grade for the stories is a B, but all very readable, and I made it through every story which is not the case with me for some of the other year's best anthologies. If you like hard sci fi please buy this book to encourage the continuation of the anthology.
Anyone looking for a replacement for the Hartwell annual year's best should try this and the editor's other series, Year's Top Ten Tales of Science Fiction (I've purchased a couple of those and been satisfied; like this volume they contain stories by legit authors, unlike some of the other scammy anthologies you'll run across).
And again, I would plea with the editor to please expand the number of stories in the volume! There's a lot of good stuff out there to choose from.
Seven Birthdays (fun), Sixteen Questions (i love most of Reynold's work), Of the Beast in the Belly, Vortex (as scientifically rigorous as Benford always is), Visitor from Taured (good character study)--these are all very solid. Number nine moon, Chasing ivory (Ted K is great, but this one more described a clever situation rather than telling a real story), Something happened here (i like McAuley, but this one kind of rambled)--pretty good. Redking, Seventh gamer, and Fieldwork--the weak ones in my opinion (with the latter two somewhat tedious), but not terrible.
On a side note, is that really THE Gregory Benford who wrote the earlier review? The man is amazing (as scientist and author) and has been producing top notch work for many decades. How does he continue to do it?
Read more
2 people found this helpful
Helpful
Report abuse

Bruce D'Ambrosio
5.0 out of 5 stars Great stories
Reviewed in the United States on March 9, 2020
Some are hackneyed, but at least a few are gems! Not easy to please a scientist who has been reading scifi for 60+ years, but this collections hits the mark
Read more
One person found this helpful
Helpful
Report abuse

Micldon
1.0 out of 5 stars Terrible reading
Reviewed in the United States on December 26, 2020
I had high hopes for this book being it was supposed to be a compilation of great stories from up and coming authors. Sadly, it was very disappointing. There is maybe one story in the whole book that was interesting and worth reading.
Read more
Helpful
Report abuse

Gregory A. Benford
5.0 out of 5 stars Five Stars
Reviewed in the United States on December 13, 2017
SOLID, exciting fiction with the right facts in place. Read it in 2 days...
Read more
One person found this helpful
Helpful
Report abuse
See all reviews

TarquinJohn
3.0 out of 5 stars Run of the mill
Reviewed in the United Kingdom on April 26, 2021
Verified Purchase
Competent 'read and forget' stories. Nothing that stayed in the mind,
Read more
Report abuse

Keith Frampton
5.0 out of 5 stars Very good collection
Reviewed in Australia on January 21, 2018
Verified Purchase
While I had read half the stories already, the joy of rereading them and reading other hard SF stories was too attractive, so I purchased the collection.
I was delighted, I found all of the stories excellent, engrossing, and entertaining. Weak stories? None that I thought that of. Strongest stories? Those by Craig DeLacey and Alastair Reynolds.
Enjoy!!
Read more
Report abuse
See all reviews

Tags that will help you discover similar books. 3 tags
kindle unlimited eligibleanthologiesscience fiction & fantasy
Results for:
Page 1 of 1Start overPage 1 of 1
Previous page
Next page
Where do clickable book tags come from?
Book tags are created from a variety of sources, some of which are customer-generated. Amazon is not legally responsible for the accuracy of the tags represented. If you are an author or publisher and would like to remove a tag associated with your title, please contact your vendor manager or publisher support team.
Back to top
Get to Know Us
Make Money with Us
Amazon Payment Products
Let Us Help You
EnglishChoose a language for shopping. United StatesChoose a country/region for shopping.
© 1996-2021, Amazon.com, Inc. or its affiliates