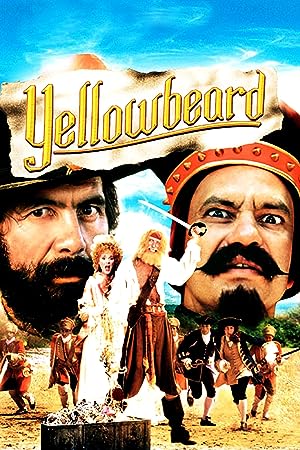 (1,037)
6.01 h 36 min1983X-RayPG
Written largely by Monty Python veteran Graham Chapman and with an all-star comedic cast, YELLOWBEARD is a hilarious spoof of every pirate movie ever made. A 16th century raunchy pirate spoof in which everyone - Monty Python, Cheech and Chong, James Mason, Madeline Kahn, Peter Boyle - wants to get their hands on hidden pirate treasure. But first they have to capture Captain Yellowbeard's son, who has the map tatooed on his skull.

The_ChiefReviewed in the United States on September 26, 2019
5.0 out of 5 stars
"I'll kill anyone who gets in the way of me killin' anyone!" -Yellowbeard
Verified purchase
If you aren't familiar with Yellowbeard, prepare to join the growing number of people who consider it to be one of the funniest movies ever made... and definitely the funniest pirate movie ever made. You won't catch it all the first time, either: it's going to take multiple viewings to truly take in all the hilarious little details lurking in this film!

I was hesitant to get this Blu-ray, since we already had the DVD and didn't expect a clearer version. Would this be a Blu-ray, or a DVD movie on a Blu-ray disc? The Darling Bride and I put them both in and watched select scenes... there is no comparison! This is a much cleaner, clearer movie than the DVD. While some indoor scenes seem red and saturated, outdoor scenes are brilliant and crisp. I attribute this to the diffferent types of film used in production, chosen for outdoor or studio use; and the conversion system's best attempt to produce the Blu-ray. All in all, a tremendous improvement over the DVD.

I strongly recommend this to anyone with a quirky sense of humor - you're going to love it!

markoReviewed in the United States on August 12, 2020
2.0 out of 5 stars
Not funny. Waste of talent. Don’t waste your time.
Verified purchase
Rape jokes are not only unfunny, and leaning on them as a running humor device in a movie is not only offensive, it’s also really boring, and clearly demonstrates really poor and lazy writing and an absolutely minimal creative effort. But it’s a perfect example of the junk you find in this dog of a film - a strained, misbegotten, angry attempt at humor. Same with brutal stabbings. Not funny. Putting them in a comedy doesn’t make them funny either, just kind of awkward in an unfunny way. This film is loaded with brilliant, talented, very funny people with nothing funny to say or do, and a visionless clock punch director who misses nearly every opportunity he gets to let funny people do what they do best. The muddled morass of a script wanders over land and sea and eventually drifts into Horse Latitudes of pointlessness, unable even to decide just who the story is about much less where it’s going or what’s funny about it. Every time the film starts to get some comedic rhythm going it derails itself setting up and bagging opportunities for rape jokes and stabbings. We get a couple of gems from Madeline Kahn, thus the 2 stars, but no one else involved here seems to be able to figure out what to do with this forgettable mess. This review is actually more than the film deserves. Not really funny. Not worth your time.
12 people found this helpful

Liz BatsReviewed in the United States on December 3, 2016
5.0 out of 5 stars
Best movie ever
Verified purchase
Best movie ever. I've been looking for it for years. I saw it when I was younger (probably 9-10) and never knew enough to know it was a comedy. My parents probably didn't know I'd "borrowed" it from the yacht club house and watched it all the time. I thought it was just a crazy pirate movie. Then I saw my first Monty Python, and then when I finally saw this again, I died laughing and was flabbergasted at my younger self. Now I've been reunited with one of my favorite movies as a kid.
31 people found this helpful

Health NutReviewed in the United States on October 1, 2020
5.0 out of 5 stars
Best Pirate Movie Ever Created!!!!
Verified purchase
Remember seeing the first time in a theater in Memphis many years ago. I have used one liners from this classic movie in conversations for over thirty years. Only recently did I share the hilarious comedy with my college age children. Favorite line is.."I"ll kill anyone who gets in the way of me killing anyone". Great movie, lots of cameo's..plus Cheech and Chong and the eighties filming format of adding partial frontal nudity scene for no reason at all.
6 people found this helpful

Mick DeLeonReviewed in the United States on January 9, 2018
4.0 out of 5 stars
All-star comedy cast shines in this take-off on Treasure Island.
Verified purchase
The greatest pirate movie comedy ever. Some don't like it, but with an ensemble including Peter Boyle & Madeline Kahn, on loan from Mel Brooks' troupe, Pythons John Cleese and Eric Idle, British comedy icons Peter Cook and Marty Feldman, and Cheech & Chong, our star Graham Chapman (The Life Of Brian, The Holy Grail) can display all the wackiness available. What's not to like? The young man who plays Yellowbeard's son is rather uninteresting. That's about it.
16 people found this helpful

SpleanReviewed in the United States on November 18, 2020
2.0 out of 5 stars
too many cooks
Verified purchase
I felt like Peter Cook in the film - wide-eyed, anticipating sublime hilarity at any moment. Next thing you know, the credits are rolling & you realize you've been cheated. So many awesome actors shuffled around onscreen to little end.
Hollywood is good at ruining a good idea by trying to make it "appeal to American audiences". That's where this broth was spoiled. Marketing-minded producers, an excessively "processed" script, & a spectacularly boring director.
3 people found this helpful

cthulhuianReviewed in the United States on September 5, 2020
2.0 out of 5 stars
Mediocre movie even with famous cast
Verified purchase
A lot of classic funny actors here from Monty Python, Peter Cook and British TV comedy veterans, Mel Brooks movies, even Cheech and Chong, plus a cameo from "Lets Dance" era David Bowie! All whose talent is kind of drowned in this mediocre morass, all can be seen in better movies/shows elsewhere. Mildly entertaining at times but a slog to watch through. A poor imitation of Python. Graham Chapman's manic psycho pirate just seems like a running skit show joke but never really works here in this context. A recurring theme of rape jokes are just made worse by the repetition. The movie never really works as an absurdist random comedy, nor as a movie narrative, it is just a mess inbetween the two concepts.
2 people found this helpful

Dennis BarringtonReviewed in the United States on August 2, 2013
5.0 out of 5 stars
One of the Best Comedies
Verified purchase
This movie, like Casablanca, has lines that are memorable and come to mind in daily life at odd times in a funny way. "You'll have to kill Me before I die!" or "Ahhh, Prison has reformed him!" (in the movie in reference to Yellowbeard (aka Graham Chapman) supposedly raping with his clothes on since he used to "take them off in the old days" as Madeline Kahn puts it. Something like this could fall flat on it's face with boorishness, but done by masters of comedy, they spin gold with hay.

For me, like many British comedies, it gets funnier the more you watch it the first few times, and holds it's charm long afterwards. I've had friends watch it the first time not thinking much of it. Then giggling a few times the next 2-3 times. Then belting out laughing the 5th+ time. It's a movie that has "in" jokes that you become a part of with time.

This movie is a mixture of cast members from "Young Frankenstein", Cheech & Chong, and a few Monty Python members. The screenplay writing is quite rash. "I'll pin your tits to the table" or "It can't have been you, I'm sure I killed the last one I raped". What makes these lines even remotely funny is a normally stoic Graham Chapman delivers a rare outrageous performance and delivers them with rare gift of phrasing and timing. Such a natural talent.

It gets poor ratings on IMDB and from Ebert, and even Cleese supposedly said it's "one of the worst 5 movies ever made" but I have always had a bizarre sense of humor and for me it's my favorite comedy. Pirates, Sexual Humour, outrageousness, and for once, a Pythonish skit with an actual plot!

And when people try to dismiss this below-the-radar-jewel, just remember, it's never more dangerous than when it's dead!!
33 people found this helpful
See all reviews
Back to top
Get to Know Us
Make Money with Us
Amazon Payment Products
Let Us Help You
EnglishChoose a language for shopping. United StatesChoose a country/region for shopping.
© 1996-2021, Amazon.com, Inc. or its affiliates