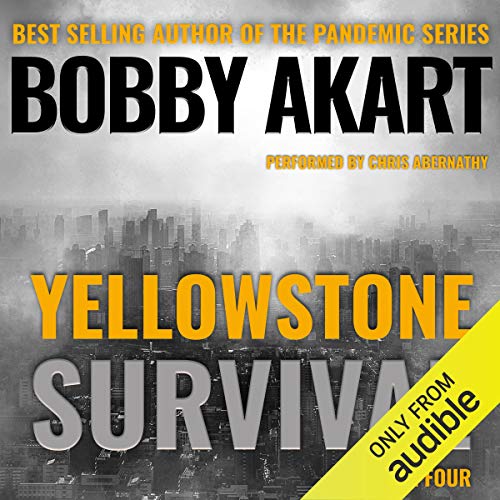 Our world has ended five times.

It's been fried, and then frozen.

Gassed with poison; smothered with ash; and bombarded from space.

Extinction is the rule. Survival is the exception.

The Yellowstone Series, a new disaster thriller from critically acclaimed author, Bobby Akart, takes the listener on a thrill ride as a cataclysmic event of extinction level proportions ticks away like a time bomb, awaiting its moment. Millions of people visit the Yellowstone National Park every year blissfully unaware they are on top of the greatest killer man has ever known - the Yellowstone Supervolcano.

Mankind had lived in the very shadows of the Earth's volcanoes for centuries. Even with advanced technology issuing warnings of the potentially catastrophic impact of volcanic activity, we built homes and businesses nearby; boarded tour buses to visit them; and failed to plan for the volcanic winter that necessarily resulted for the eruption of the largest among the - the Yellowstone Supervolcano.

Following the eruption of Yellowstone, resources were scarce and the battle for survival began as man faced off against man for water, food, and medical attention. If Earth's greatest killer didn't take your life directly, it did so indirectly through starvation and dehydration.

Those who remained fought amongst themselves to survive.

Know this. The eruption of the Yellowstone Supervolcano will be more than a spectacle to grab our attention. It will be the end of the world as we know it.

About the Yellowstone Series

Volcanoes are the Earth's way of letting off steam. While most people look at volcanic eruptions as natural disasters, the fact of the matter is, without them, the Earth would explode. Deep beneath the surface of the planet, excess heat builds up, finding a way to vent. Like an overcrowded bus on a hot summer day, the overheated magma stews in its own madness, allowing pent-up frustrations to boil over, until it releases its fury - its HELLFIRE - upon the world above.

Yellowstone is the most potentially explosive, violent, deadly, active volcano on our planet and scientists agree, a catastrophic eruption is inevitable. Yellowstone is extraordinary in its potential and is quite simply, Earth's greatest killer. You've been warned.

Books in the Yellowstone Series

Your audiobook is waiting!
Learn more about membership
List Price: $19.95
You Save: $6.96 (35%)
By completing your purchase, you agree to Audible’s Conditions Of Use
Sold and delivered by Audible, an Amazon company
Share

Jorge
5.0 out of 5 stars Another Thriller
Reviewed in the United States 🇺🇸 on October 1, 2022
Verified Purchase
Mr Smart provides another captivating series. The scientific information provided creates the story, but its the characters and their ordeals that keep the reader unable to put their Kindle down (no matter how late it is and that you have to go to work in the morning).
Read more
Helpful
Report abuse

richard freedman
5.0 out of 5 stars Captivating!
Reviewed in the United States 🇺🇸 on July 27, 2022
Verified Purchase
Great story line thru which the author weaves interesting true volcanic facts without us feeling “taught”! I truly enjoyed the saga of Jake and Ashby as they fight their way out of a post epic volcanic event! Read all 4 Yellowstone books and now want to read more of Bobby Akart’s other series books!!!
Definitely 5 stars for content, pace and excitement!
Read more
Helpful
Report abuse

Victor Diller
5.0 out of 5 stars YELLOWSTONE - THE SERIES 1-4
Reviewed in the United States 🇺🇸 on July 21, 2022
Verified Purchase
This series is one of my very top ones of ALL. Of course I love geology to start with. Best class in college, but as happened it wasn’t my field of study, but I still love it, and reading Bobby Akart’s novel is so awesome. The very best. I read all four books in less than ten days.
Read more
Helpful
Report abuse

Amazon Customer
5.0 out of 5 stars Wow
Reviewed in the United States 🇺🇸 on July 23, 2022
Verified Purchase
One of the best I have read. Loaded wth white knuckle tension, tender moments, heroics, bad guys, good guys, and totally loved the ending. Excellent work, Bobby, and not because we share a name!
Read more
Helpful
Report abuse

Digger WY
3.0 out of 5 stars Meh...
Reviewed in the United States 🇺🇸 on August 9, 2022
Verified Purchase
The first three parts were great. This last one was well written, but diverted far from the volcanic eruption. The author completely leaves all activity in America, and focuses totally on the protagonist cruising to safety, with lots of drama along the way. Again, well written, interesting story, but lost my interest.
Read more
Helpful
Report abuse

Kindle Customer
5.0 out of 5 stars A great series
Reviewed in the United States 🇺🇸 on June 29, 2022
Verified Purchase
A dramatic ending to a fascinating story. Akart's research really shines! I can't wait to start another of his stories.
Read more
Helpful
Report abuse

Denise K
5.0 out of 5 stars Once again...outstanding!
Reviewed in the United States 🇺🇸 on November 27, 2018
Verified Purchase
Once again, author Bobby Akart has taken us on an epic journey of survival when one of the biggest threats to mankind decides to let the world know it is not happy. The Yellowstone caldera rears its ugly head and causes mass destruction and death, leaving nothing in its path but obliteration and mayhem. As we follow the two main characters, Jake and Ashby on their trek away from ground zero, we learn that the caldera was not the only thing to be afraid of when the shtf. They found out the hard way that nowhere is truly safe and to trust no one until they can prove themselves. As the two of them travel to hopefully find some respite and a safe haven, they are met with many unthinkable situations that have them questioning their fellow human beings and surroundings. It made me lose faith as I read along, seeing what depravity comes out of a time of crisis when we should all be coming together to help each other survive. But as with all of Bobby Akart’s books, the realism of what happens at times like these is nothing short but a lesson on what to look for, how to prepare and to remember…there is always hope if you keep the will to survive. This final book in this series is one of the finest I have read. Not only because of the entertainment factor but because of what Mr. Akart put into it…his heart and soul. Throughout this whole series, the amount of time and research that he must have done to bring us such an outstanding series is immeasurable. The details are phenomenal and the information about the Yellowstone Caldera…incredible! Thank you Bobby Akart for the wonderful series…the hours of enjoyment and most of all, for the knowledge that I have picked up along the way while reading your stories. I look forward to the next series where I know you will once again bring into light a headline from the news, long before it ever happens.
Read more
9 people found this helpful
Helpful
Report abuse
See all reviews

Guy Roberts
1.0 out of 5 stars Disappointing conclusion to the series
Reviewed in the United Kingdom 🇬🇧 on December 14, 2018
Verified Purchase
A dull and disappointing conclusion to the series. There's almost nothing about the effects of the volcano on the rest of the world - wars? climatic and ecological disaster? famine? Instead we just hear about our heroes getting into and out of trouble with boring regularity.
Read more
Report abuse

Dave Henly
5.0 out of 5 stars Great Series.
Reviewed in Canada 🇨🇦 on February 2, 2019
Verified Purchase
As I mentioned in my review of the 1st book in the series of 4, they are all great reads - the author is great at depicting the scenes of destructions, along with the humanity (and inhumanity) of the people and his characters are outstanding, and very human. All his books are very readable and so very hard to put down!!!
Read more
2 people found this helpful
Report abuse

Scott Osmond
4.0 out of 5 stars Fitting Ending
Reviewed in Australia 🇦🇺 on December 9, 2018
Verified Purchase
Escaping the US is only the first step to survival. Pirates, a hostile Mexican government and the fallout from Yellowstone continues to spread. Easy writing style although the characters make some obvious mistakes. But we get a happy ending.
Read more
Report abuse

cyndi W.
5.0 out of 5 stars Come for the science,stay for the story!
Reviewed in Canada 🇨🇦 on January 21, 2019
Verified Purchase
I loved the whole series! I liked how the story filled in around the science. Worth the read and educational.
Read more
2 people found this helpful
Report abuse

Kindle Customer
5.0 out of 5 stars The struggle made them determined to live
Reviewed in Australia 🇦🇺 on January 4, 2019
Verified Purchase
As the last book in this series I rejoiced to find that every danger, every blockage and adversity did not stop our heroes from overcoming and persevering to find a new life.
Read more
Report abuse
See all reviews